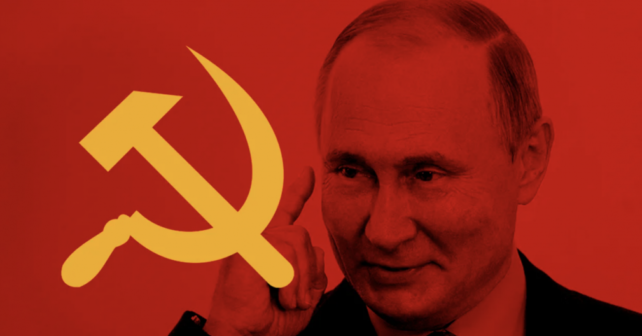 Article prepared by Dalia Bankauskaite – a Nonresident Fellow in CEPA’s Democratic Resilience program. Firstly published by DFRLab as part of their effort to broaden expertise and understanding of information ecosystems around the world.

It is vital to understand why Russia’s rewriting of history holds dangerous implications for our world today. Vladimir Putin’s June 2020 article, “The Real Lessons of the 75th Anniversary of World War II,” shows that Russia has taken the long-practiced Soviet-style rewriting of WWII history to a new level. Putin endorsed a false claim that Russia and the Red Army are the only liberators of Europe and the only victors of WWII. Furthermore, the Kremlin incorporated this idea as a part of their constitution — a state ideology, and thus demand that the world accept this rewritten view of the history of the Second World War.

In his article, published on June 18, 2020 in the American conservative magazine The National Interest, Putin makes an effort to re-write WWII history in the tradition of the Soviet Union. He maintains that the central part of WWII is the Great Patriotic War fought between the Soviet Union and the Nazi Germany from 1941–1945. He conveniently edits out the fact that from 1939 to 1941, the Soviet Union was an ally of Nazi Germany.

In principal, the article does not present new messages; rather, rather repeats talking points that have been regularly raised by the Kremlin over previous years. Putin glorifies the role of the Soviet regime and the Soviet Red Army in liberating Europe from the Nazis and defines Russia and the Russian people as the only victors of the war. While the described role of the USSR at the end of WWII ignores the role of the other Allies, the role of the USSR at the outbreak of the war — i.e. the Molotov-Ribbentrop pact — is downplayed. Instead, Putin accuses the West and Poland for the outbreak of the war. For the Kremlin, the Soviet victory in the Great Patriotic War is a core narrative of current Russian statehood, which suffers from the psychology of having lost an empire through the fall of the USSR, and in many ways, the status of having been a great power. Further in his article, Putin insists on branding Russia as a key constructor of world order inviting only the great powers — the permanent members of the UN Security Council — to a summit to discuss international order, closing the door to other countries.

The article was published prior to Russia’s constitutional referendum, which took place from June 25-July 1, 2020 and before a huge military parade on June 24. The prayed was originally scheduled for the annual May 9 celebration of their victory in the Great Patriotic War but was delayed do to the pandemic.

Among the falsehoods contained in the article:

● Putin claims that Poland, the first victim of WWII, is partly responsible for starting WWII.

● Putin compares the secret Molotov-Ribbentrop Pact (which Hitler’s Germany and Stalin’s Soviet Union divided Europe into their spheres of interest) as an equivalent to the 1938 Munich Agreement (between United Kingdom, Germany, France, Italy) that ceded the Czech Sudetenland to Hitler’s Germany. He uses a disinformation technique in an individual or institution is vilified for something the aggressor does itself.

● Putin states that the incorporation of Latvia, Lithuania, and Estonia into the USSR was implemented “on a contractual basis, with the consent of the elected authorities,” as opposed to the reality of the Soviet Union’s illegal annexation of the Baltic States, which was a direct result of the Molotov-Ribbentrop pact.

Historical narratives are foundational for forming most collective identities. The way any group relates to its history has implications for its political and social policies, and the behavior of a nation.

The world must never forget the truth that the Munich Agreement was a shameful consent by the West to Hitler’s annexation of Czech territories in the name of greater peace. However, as professor Mark N. Katz writes, “to claim that they did so in order to encourage conflict between Germany and the USSR is an exaggeration.” The agreement ceased to exist immediately after Hitler broke it by occupying the rest of Czech territory.

Usually, international agreements are concluded in order to reach peace. However, the Molotov-Ribbentrop pact signed on August 23, 1939 by the foreign ministers of Nazi Germany and Soviet Russia was a pact of war among two totalitarian regimes. It assured that neither side would attack the other unprovoked, and in its Secret Protocol established spheres of influence across Poland, Lithuania, Latvia, Estonia and Finland. Germany began WWII only after this pact had been signed, with the invasion of Poland from the west on September 1, 1939, which was followed by the French and British declaration of war on Germany.

Soon after, the Soviet Union invaded Poland from the east. Subsequently, the Baltic States were occupied by the Soviet Union in June 1940 and further forceful annexation was complete by 1944. Baltic anti-Soviet resistance groups, known as the Freedom Fighters or Forest Brothers, fought against Soviet occupation from 1944 through 1953, marking one of the longest resistance efforts in Europe, with some individual fighters holding out until the 1960s.

Apart from the misleading narratives, the rhetoric of the article leaves no space for dialogue on the historical role of many other nations that participated in WWII. One can readily observe the literary devices used to support Putin’s narrative:

● Putin uses superlatives that underscore the division of us vs. them, forcing audiences into a false binary choice that those who do not agree with his views are against him and Russia, and thus implicitly pro-Nazism. In addition, superlatives and hyperbole create a discourse where Soviet actions during WWII are positively promoted while the roles of other nations are diminished.

● Putin uses artificial juxtaposition of an individual vs the group — in this case, the Russian nation. Namely, the interest of the nation is stated above the interest and needs of an individual, a tactic typical of nationalistic regimes. It also offers a false appearance of “unity” within Russian society while ignoring other collective memories of the Soviet regime — repressions, the Soviet gulags, the Katyn massacre, and of course the secret Molotov — Ribbentrop Pact.

● The selective presentation of historic events and the identification of personal memories with collective memories. The pronoun “I is very often replaced by the collective “we,” confusing the reader as to whether “we” is Putin, the Kremlin, or the Russian people, the Soviet people, etc.

● Repetition of phrases and repetitive rhetorical questions help Putin play on readers’ emotions and make his view on the topic more memorable, more distinct and undisputable.

The end of WWII is celebrated in Europe as a time of reconciliation, peace and unity. Europe tries to forgive, and indeed rebuild and reunite for the sake of joint prosperity, whereas Putin points fingers and accuses. Europe has an open dialogue about the crimes of the war, Putin excludes a dialogue, denies any Soviet crimes and enforces “the only correct” version of history. Interpreting historical memory. is a complicated issue, it cannot be black or white. Usually, in a democratic society, narratives are constructed around open dialogues that feature several perspectives and ultimately develop a collaborative agreement among different nations.

The narrative of “victors” forms the basis of the state ideology

Putin’s interpretation of WWII is directly reflected in the new edition of the Constitution of the Russian Federation. The amendment to the 67th article of the Constitution is intended to turn the narrative of victors of WWII (“Myth of War”) into a prologue to a mandatory state ideology. It consolidates the status of Russia as the only victor of the war, establishing a foundation of a new Russian identity. Russian diplomats are already enforcing this narrative full- hrottle. For instance, the Russian Embassy in Germany asked history teachers in Germany to use Putin’s article in their history lessons. Russian officials and pro-Kremlin media use Putin’s interpretation of WWII as talking points. Even among the younger generation of Russians, this can be seen within Russian pop culture, where Russia is seen as the victor of WWII and liberator of Europe from the Nazis.

Why this is important to understand

Putin wrote this article to justify decades of Russian foreign policy — pre-war, wartime, post-war and today. The article also tries to whitewash Stalin’s crimes against even his own population. The targets of these narratives are young people — a generation with no memory of WWII — at an age when their historical interest is forming and it is easier to manipulate their understanding of history. Putin also refers to how Hitler came into power, stating that it was largely due to the dissatisfaction of the post-WWI global order and the Treaty of Versailles. He leaves the reader to contemplate what might happen if Russia is dissatisfied with global order today. Does Putin use this argument to validate his own interests of extending an empire?

The historical narrative of Russia as a liberator of Europe from the Nazism, as described by Putin, represents the ideological mobilization of Russian society, forming a superpower mentality within the minds of its own citizens and swaying those less informed about history in the West.