‘Donetsk Fiasco’ of the Scouts from the Russian 7th Armored Brigade 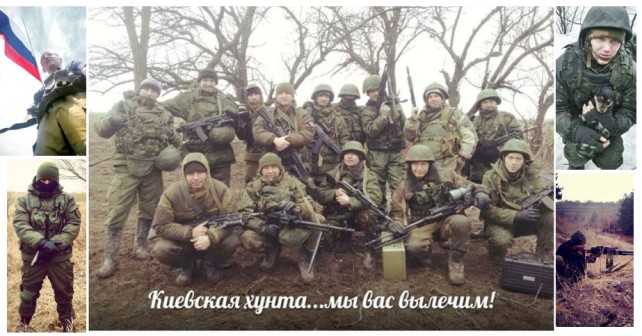 We continue the series of OSINT investigations which spot light on the facts of the Russian forces’ participation in the conflict in Donbas (the largest database with investigation results can be found here). The new article contains information about the ‘Ukrainian assignment’ of a unit from the 7th separate armored brigade (military unit No. 89547, Central Military District, Chebarkul, Chelyabinsk Oblast, Russia). In particular, we have studied Dmitry Mikhailov (senior lieutenant in a reconnaissance unit with the callsign ‘Fiasco’ ) together with his follower Aleksei Nikitin-Davydov and the evidence of their trip to Donbas.

It is well-known that Russia is the world’s leading supplier of the ‘hybrid’ terrorism – the country is involved in numerous war crimes. A lot of the Russian mercenaries and even whole regular army units still arrive to Ukraine; however, the Kremlin denies this fact. In the meantime, more and more facts of previous Russian soldiers’ ‘assignments’ to Ukraine crop up. 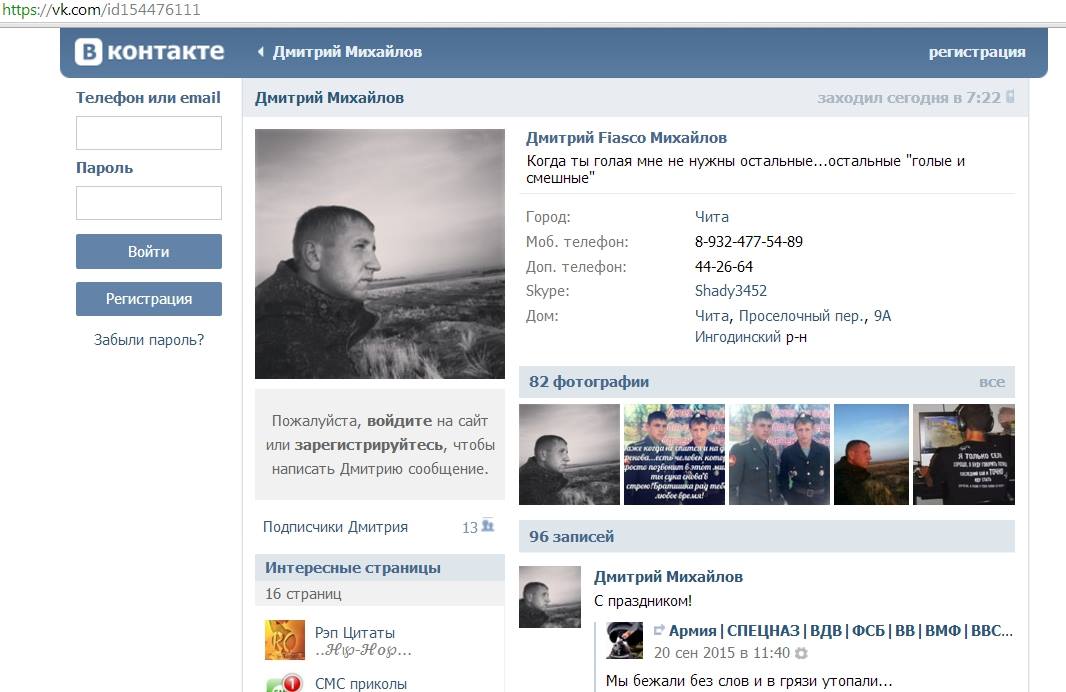 Please note: During the preparation of this story, the social profile of the war criminal D. Mikhailov was duly edited. All information regarding his service in the Russian army, as well as pictures from the ‘Ukrainian assignment’ were deleted. Dmitry became a ‘perfect family man‘. But our archives are still there. It just proves that the officer’s social account with the initial information is closely monitored by the Russian special forces, and their actions confirm correctness of our investigators. 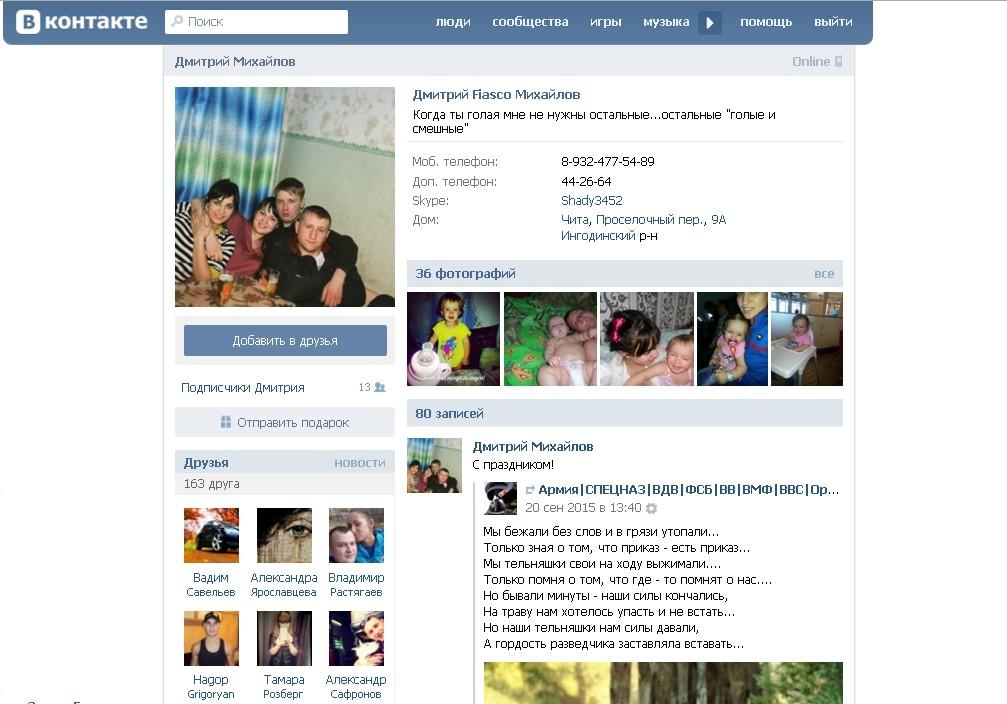 From November 20, 2014, till February 11, 2015, Mikhailov published several speaking photos from the trip to Ukraine:

A typical ‘local militant’ with badges of so-called ‘Novorossiya’ (1), the pictures with friends in various uniforms without any insignia (2, 3, 4), a group photo (4) labeled ‘Kiev junta… we will cure you’ (the condition of his face says he was not successful in this), a picture of a bunch of the Russian equipment (5) can be seen. 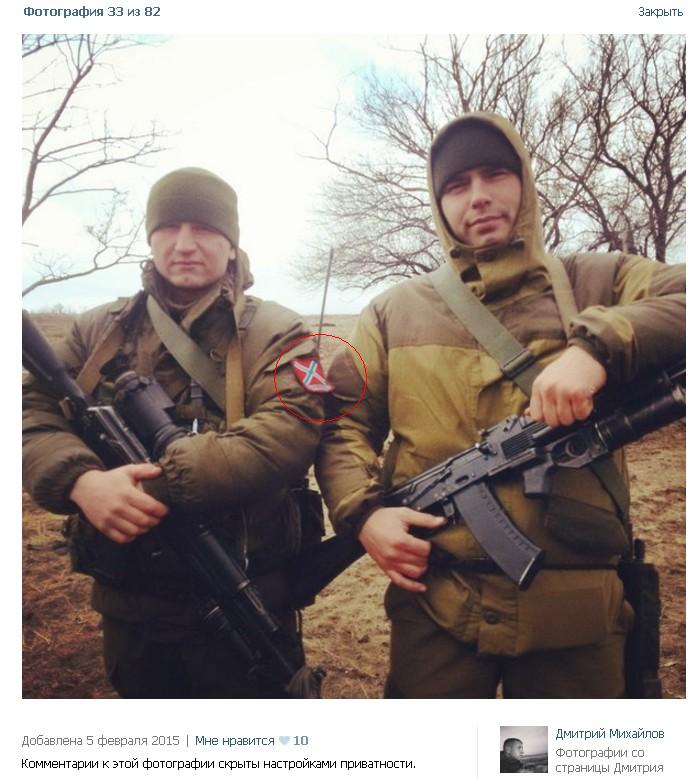 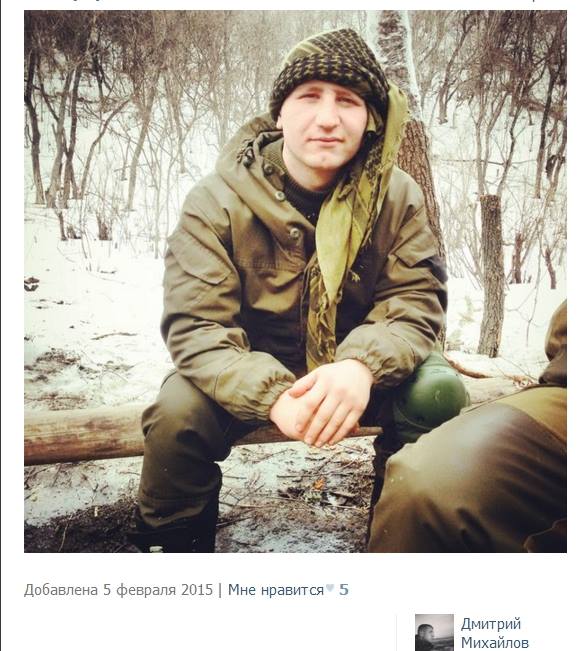 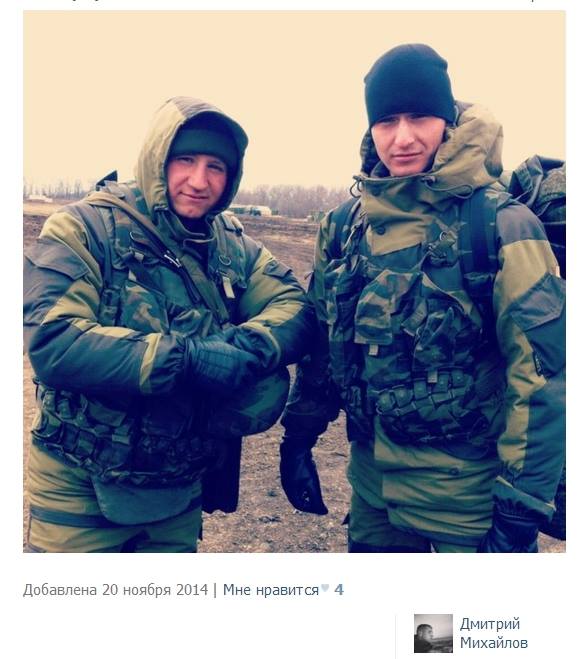 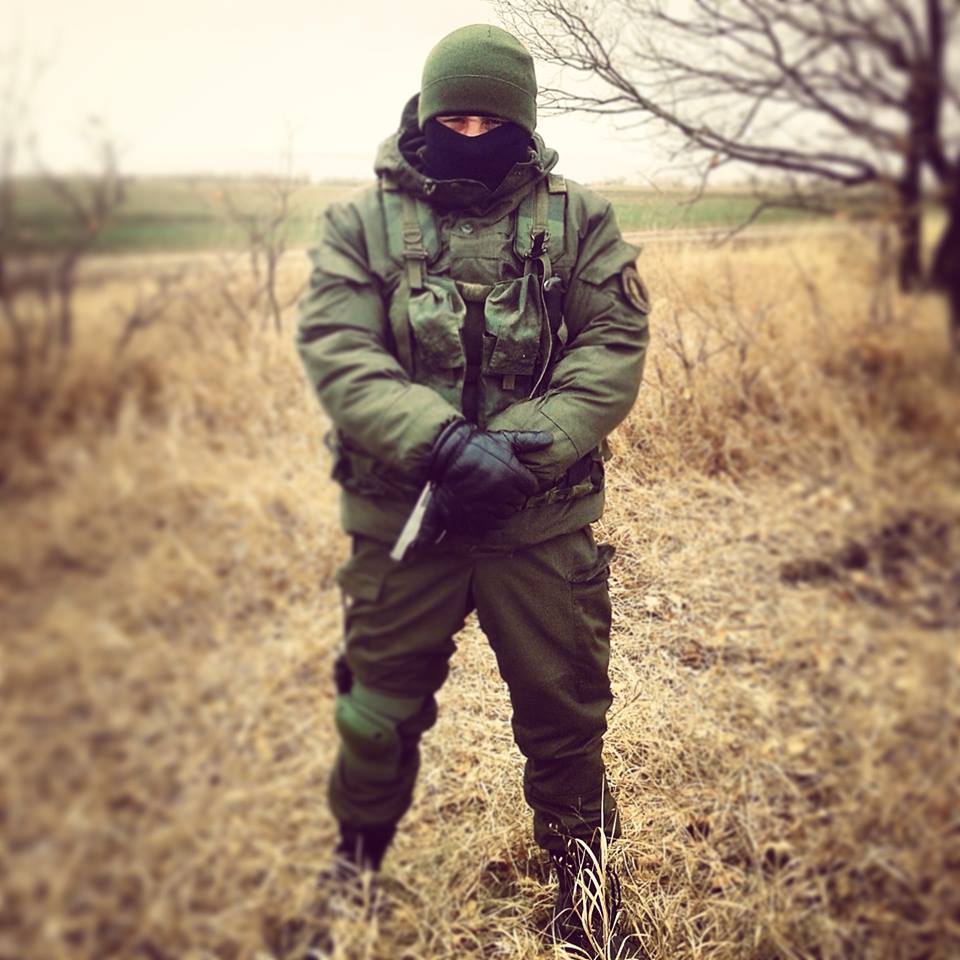 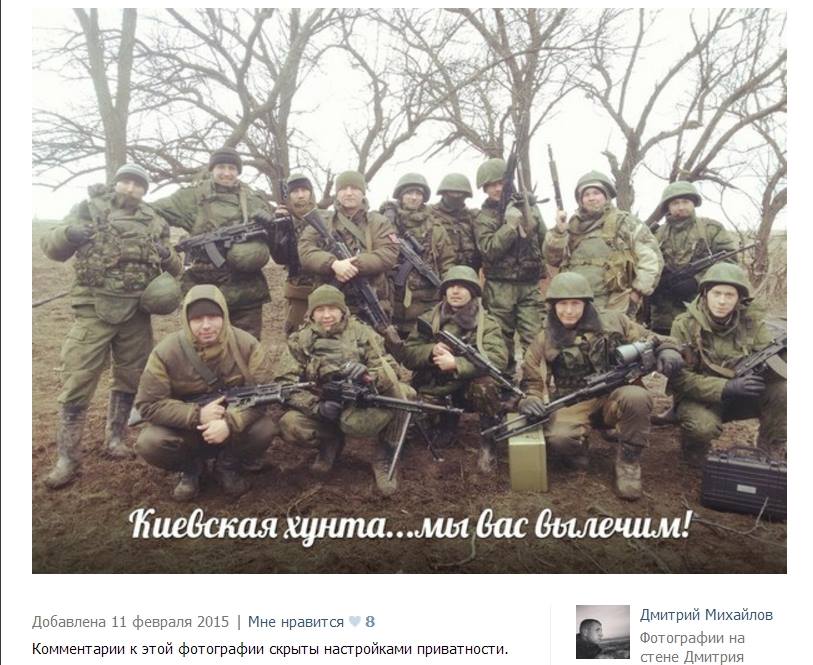 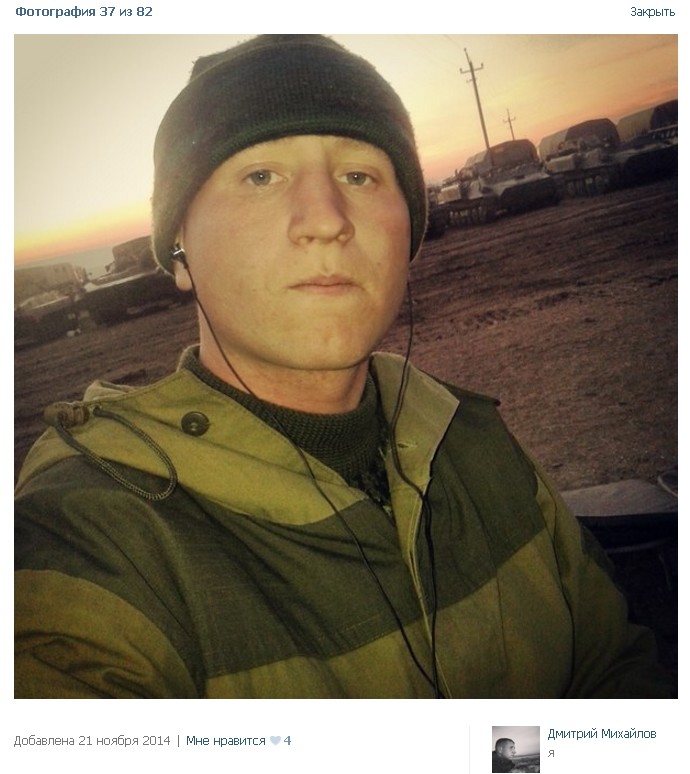 In general, it is perfectly understood that these ‘local miners’ are in fact a whole unit of the Russian servicemen. Based on Mikhailov’s pictures, he is the commander of a reconnaissance platoon. This can be seen from the group photo with small arms coupled with optic and night sights, which are not normally used by motorized rifle units. Also the stripped vests are often worn by scouts, including the ones from the recon battalions of motorized and armored brigades of the Russian army.

As for August of 2015, D. Mikhailov was in the rank of senior lieutenant (6, 7). There is a notable picture of a BMP-2 where Mikhailov is wearing a helmet with number ‘814’ – we assume that this is the command vehicle of a reconnaissance platoon of a recon battalion of the 7th brigade. 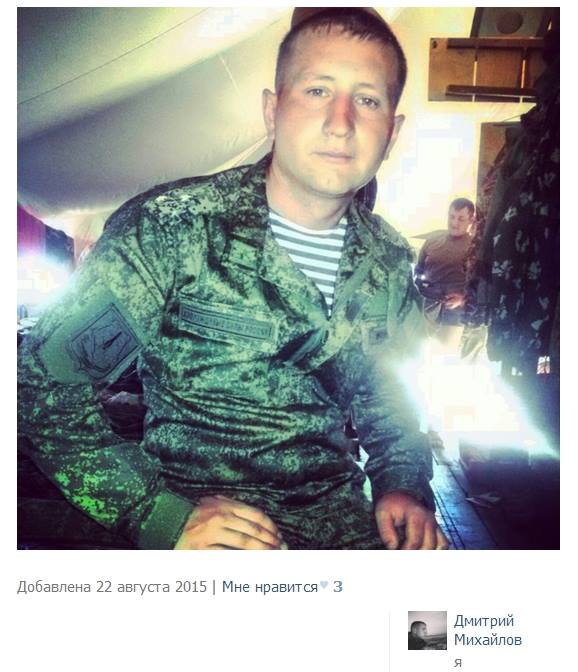 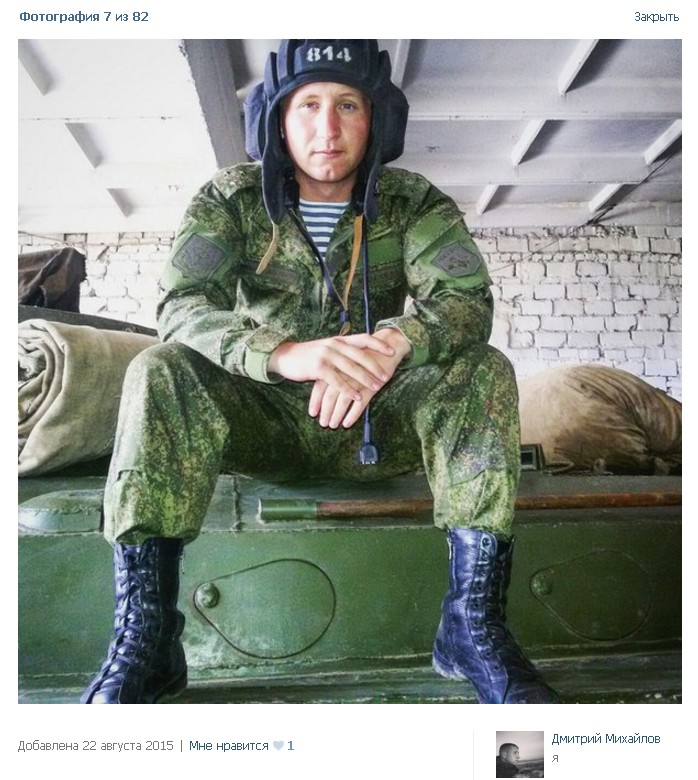 Mikhailov has tried to hide the real military unit he belong to. He even left a ‘false track’ in the contact list – ‘military unit No. 42123’ (the 374th separate ammunition disposition company). But it was not hard to find his actual unit – his contact list (where other career servicemen who fought in Ukraine are present) indicates that Dmitry is an officer of the military unit No. 89547 (Chebarkul, Chelyabinsk Oblast, Russia) the 7th armored brigade has been already spotted in context of the ‘Ukrainian assignments’.

Moreover, Mikhailov has disclosed his unit by showing the tactical signs on the armored vehicles. For example, the relatively fresh photo taken on August 22, 2015 shows a BTR vehicle with a ‘white square in a dotted circle’ (8) which is the designation for the unit No. 89547 with Dmitry standing in the center wearing kaffiyeh and tactical goggles. The picture is labeled ‘Me’ – the true scout…

In addition, we would like to note that even before the ‘Donbas campaign’, Mikhailov was awarded a medal ‘For Return of Crimea’ (9), which means it is not the first trip to Ukraine of this Russian war criminal. 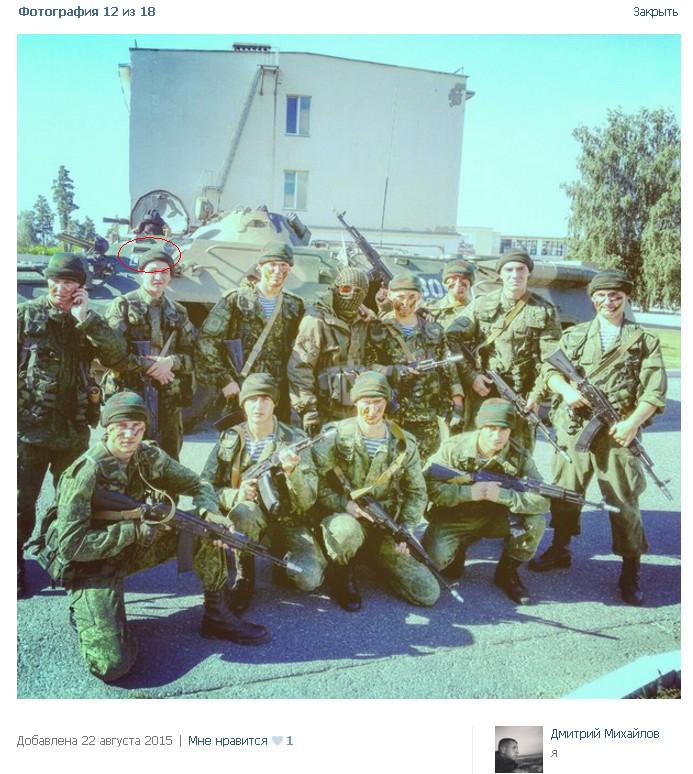 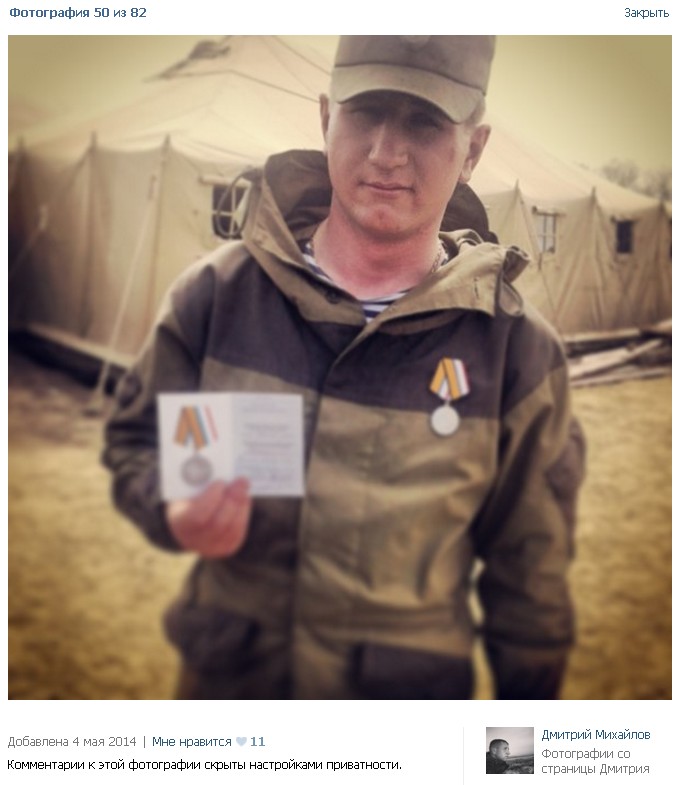 There are also personal and family pictures, including photos of his car with the license No. ‘с758НТ’, region code ‘174’ (Chelaybinsk Oblast) (10, 11). His old cadet pictures are also there. It seems that he started his career as a marine cadet, but after graduating from a military university, Dmitry transferred to ground forces (12, 13, 14). 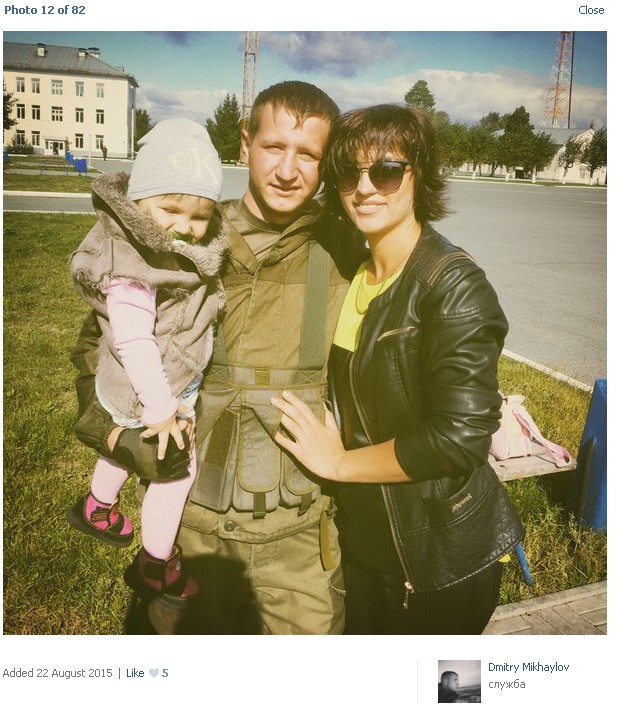 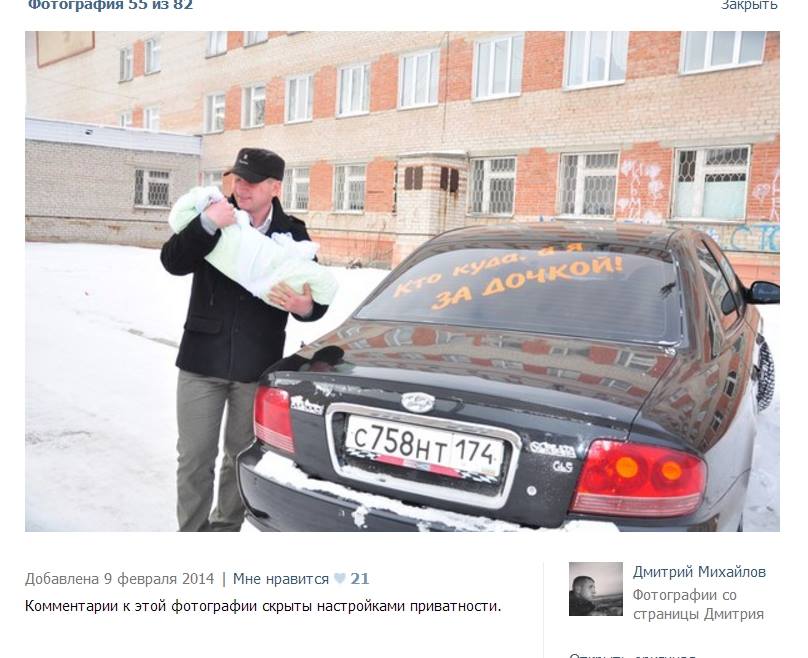 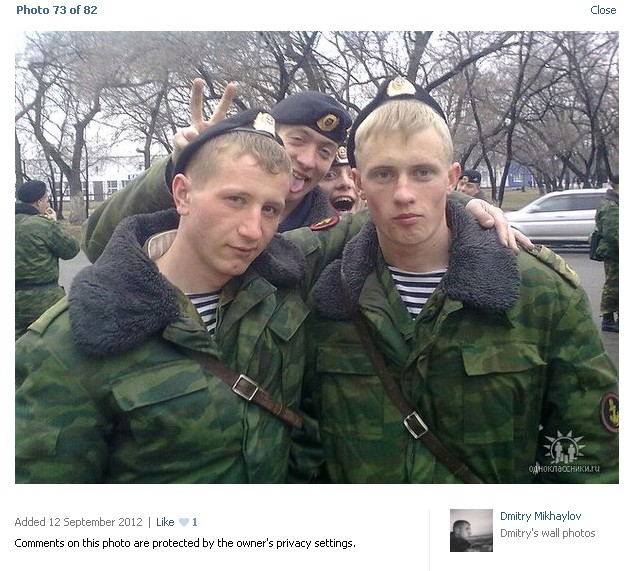 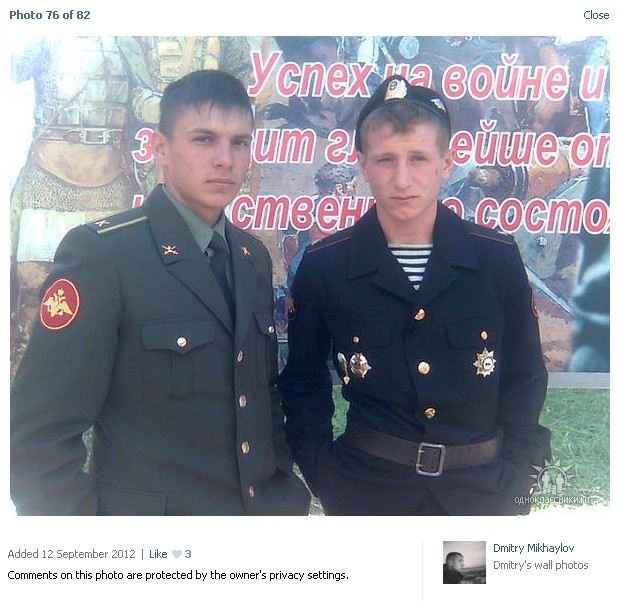 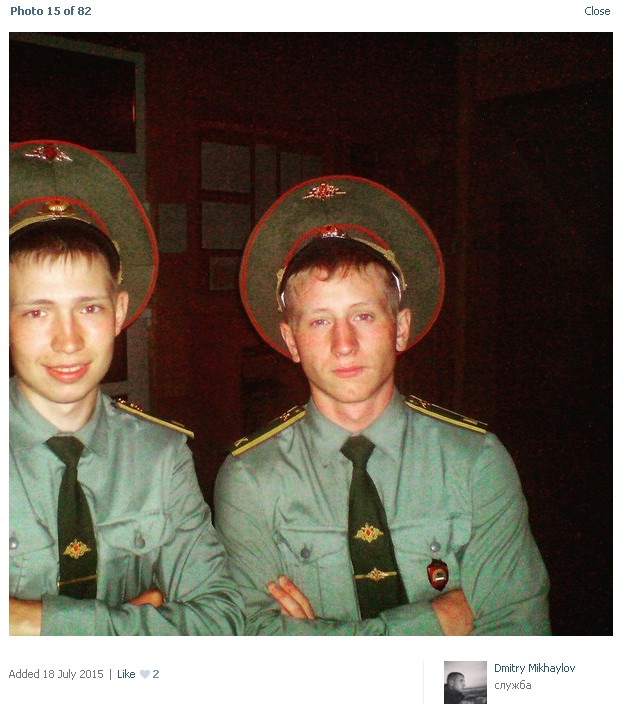 We should separately mention Mikhailov’s follower – Aleksei Nikitin (profile archive, photo archive, contact archive), the scout and ‘veteran’ of the same unit, and whose real name is A. Davydov (as written on the badge on one of his pictures 15, 16). 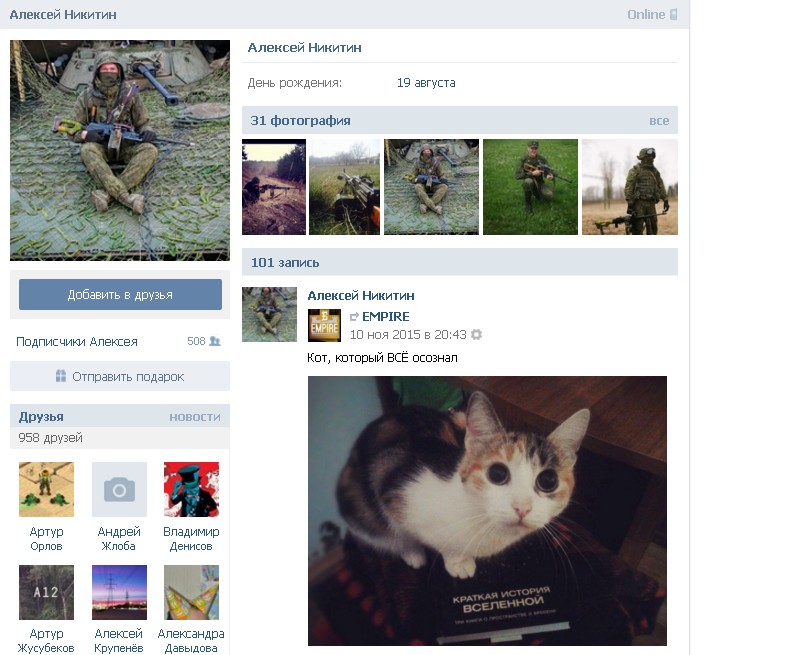 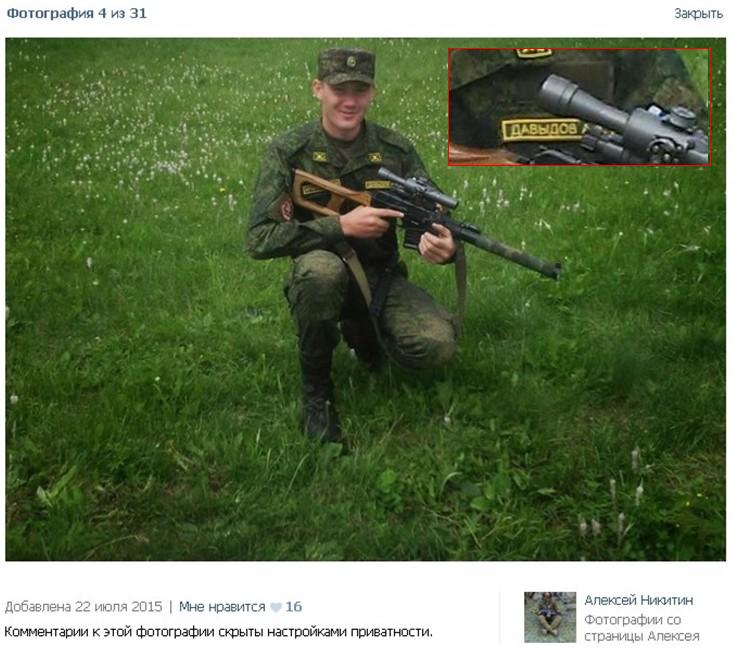 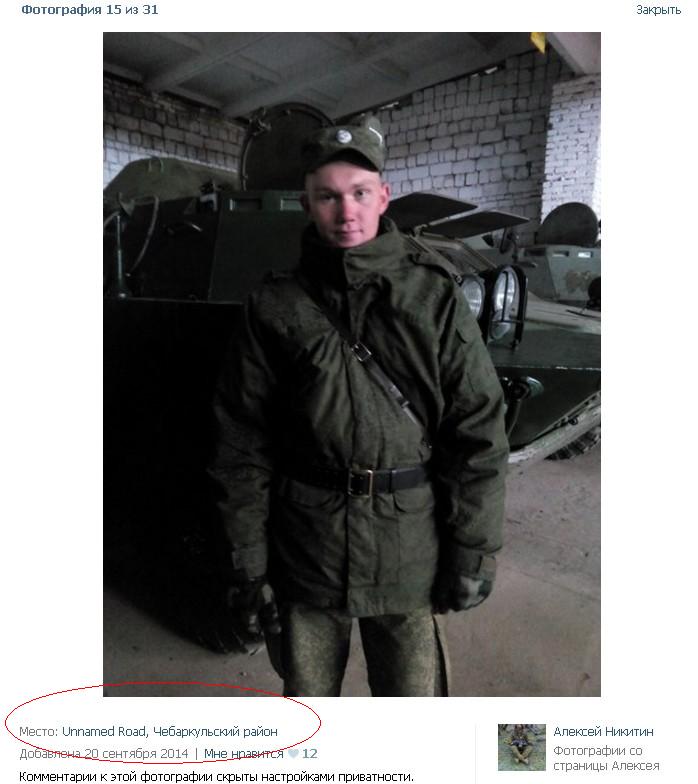 Besides the photos above, we found a noteworthy set of slides in Nikitin-Davydov’s photo album 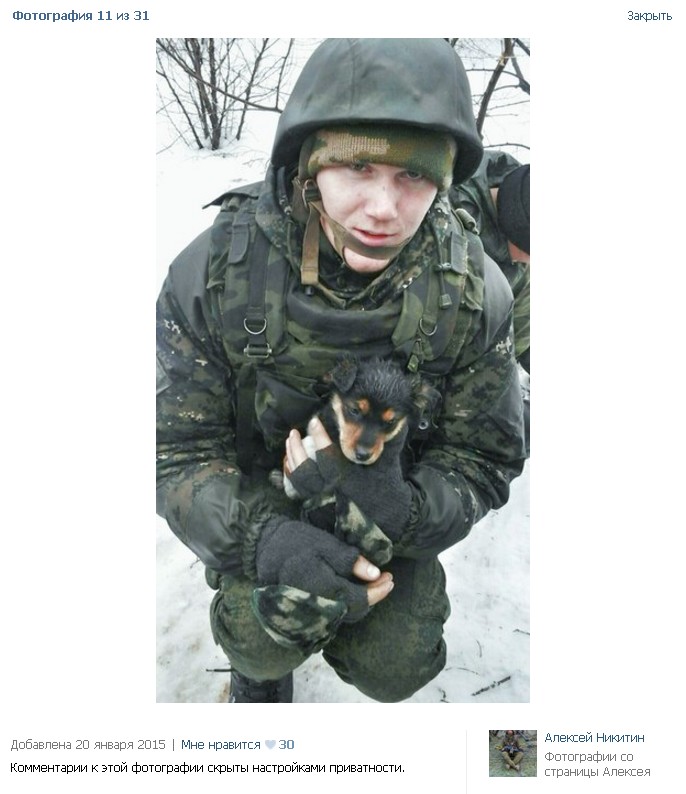 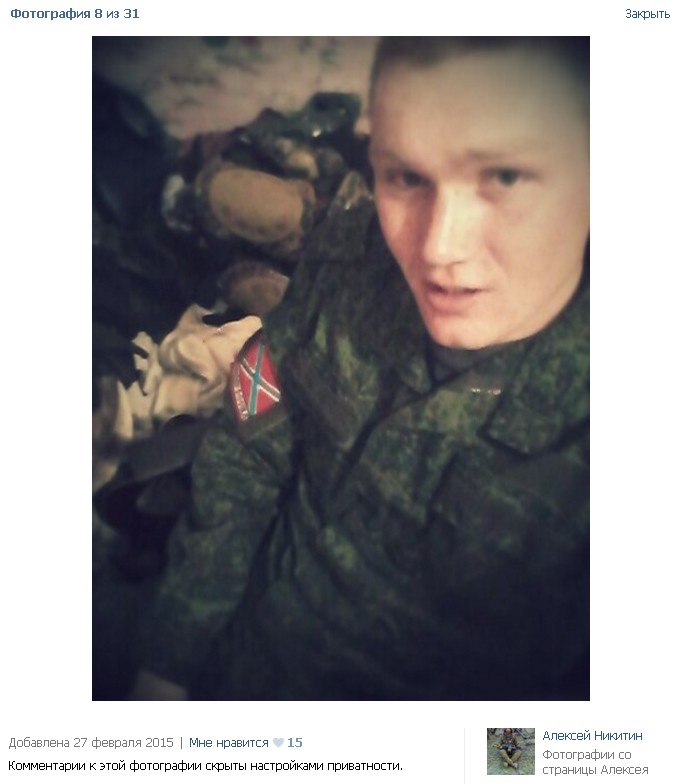 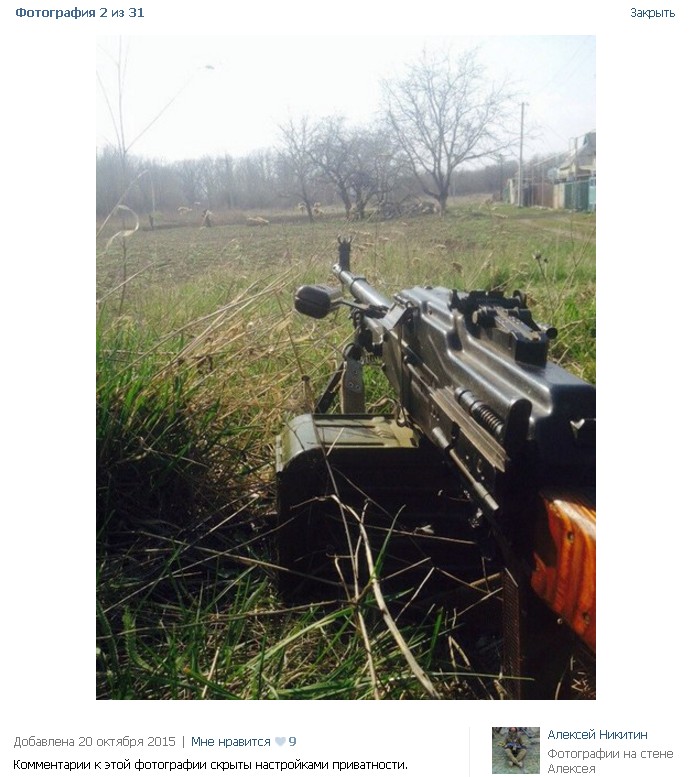 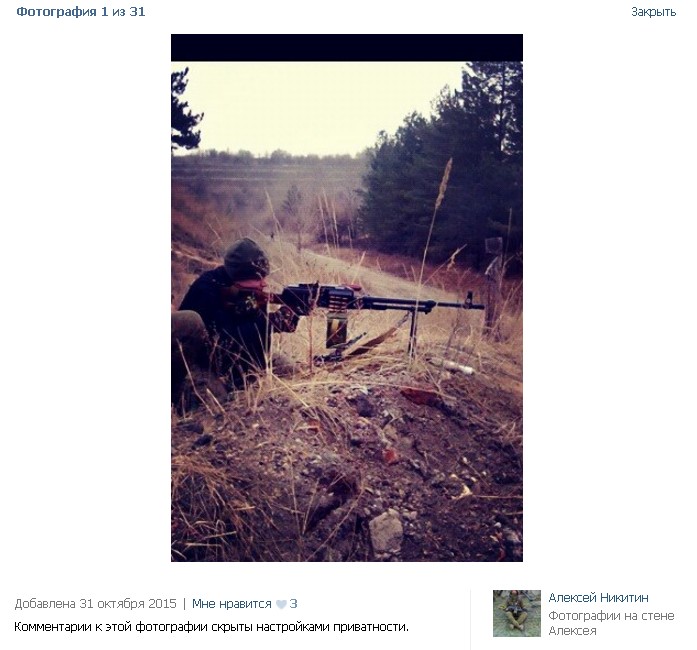 This is not the first time we observe the 7th armored brigade of the Russian armed forces. We have registered tanks and self-propelled howitzers with wiped out tactical signs of this brigade from Chebarkul in November of 2014. That was in Rostov Oblast, not far from the Ukrainian border