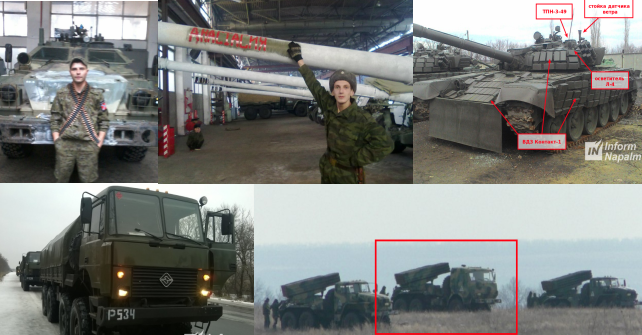 There are dozens of legends on the world wide known Russian ‘military shops’. Unlike the common military shops which sell uniform, chevrons, etc, this state-scale ‘supermarket of terror’ continues to surprise observers with the variety of weapons and equipment deployed to Donbas by Russia. The InformNapalm has decided to summarize the assortment of ‘products’ discovered in February.

Let us recall you that a year ago, on February 19, 2015, the InformNapalm’s volunteers put together the data on the Russian armed forces’ equipment and published it as the “TOP-10 Military Gadgets Involved in the Russian Aggression Against Ukraine” infographics. That was the first attempt to summarize the results of our OSINT investigations on identification the heavy weaponry used by the Russian army and militants. The article was translated in 14 languages.