From Severomorsk to Donbas. ‘Vacation Photos’ by Marine of the 61st Brigade, Russian Northern Fleet in Ukraine 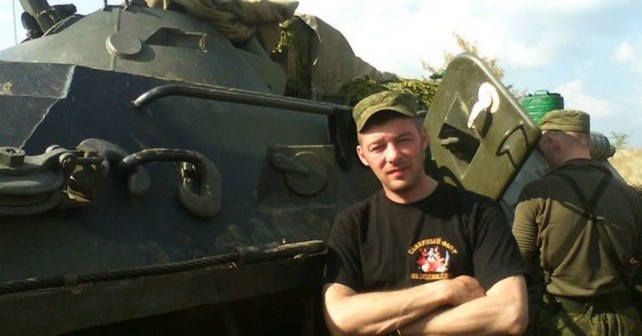 We found another Russian war criminal. His name is Evgeny Evgenyevich Pismensky (profile, archive). He is a veteran of the ‘Ukrainian assignment’ in the Summer—Fall, 2014. He is also a squad commander of a guard platoon of military unit No. 20991 of the Russian Northern Fleet (torpedo-missile weapon base in Polyarny, Murmansk Oblast, Russia). 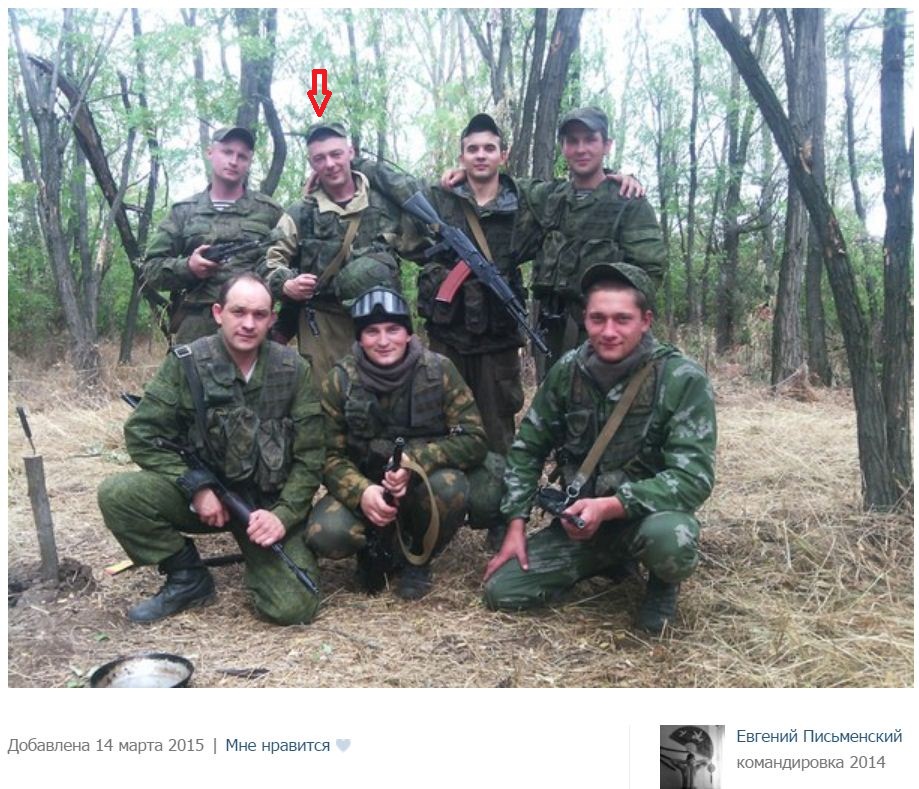 Mr. Pismensky does not hide the fact of his mission. He created a photo album named ‘Assignment 2014’ with a series of 156 photographs (original, archive ).

His photo gallery exposes military equipment that was previously shown on the pictures related to the ‘Ukrainian mission’ from other divisions of the Russian Northern Fleet, for example: a ‘trophy’ Ukrainian Combat Reconnaissance Patrol Vehicle, which repeatedly appeared in the photos of servicemen of the 61st Marine Brigade (unit No. 38643 of the Northern Fleet, Sputnik, Murmansk Oblast, Russia). See Evidence of the participation of 61st Marine Brigade of the Northern Fleet of the Russian Navy in the fighting in Donbas). 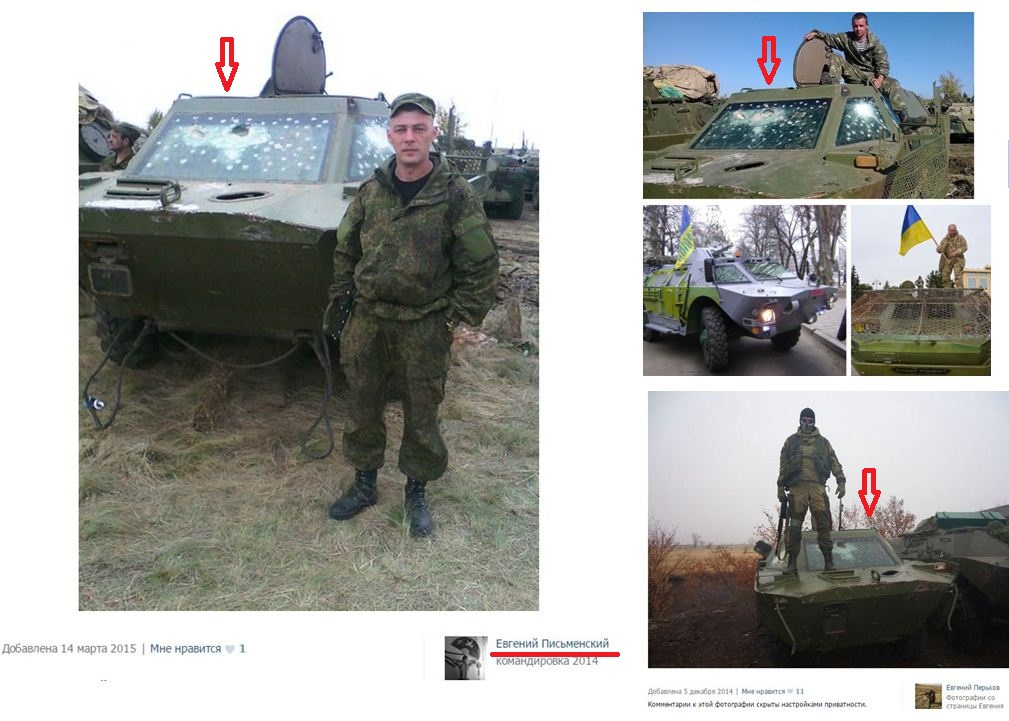 On the following picture you can see T-72 tank with the words ‘Death to Aydar’ (name of ‘Aydar’ battalion was scratched). This tank was recorded by us as a part of the task force from the 200th Special Purpose Separate Motorized Rifle Brigade (Unit No. 08275, Northern Fleet, Pechenga, Murmansk Oblast, Russia). More details in the article (in Russian): Fighting way of the 200th special purpose Independent Motor Rifle Brigade of the Northern Fleet of the Russian Federation Navy. Rostov oblast and Ukraine. 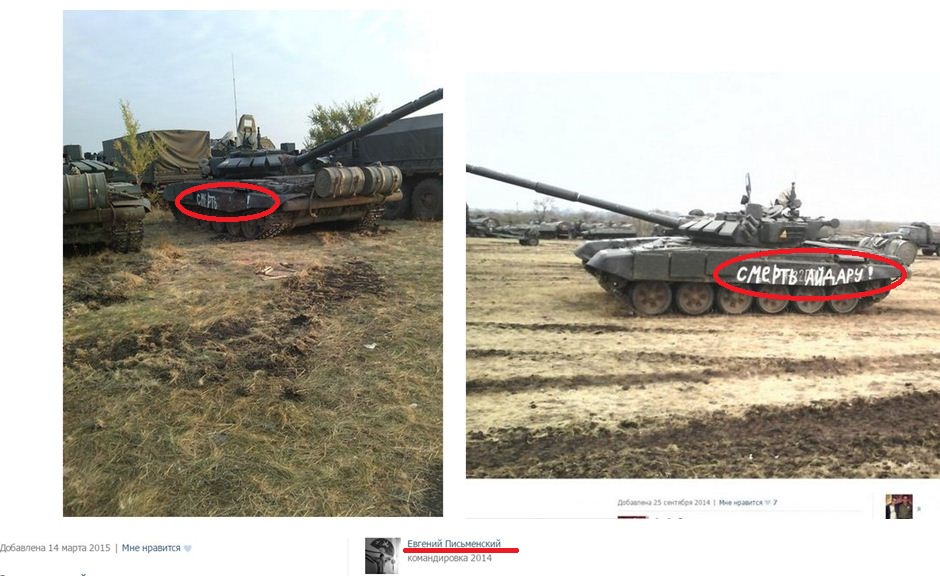 You can find other military equipment in the photo album of Mr. Pismensky — armored vehicles with registration numbers covered with a green paint, self-propelled mortars 2S9 NONA on the hull of the BTR-D, tanks with the hammer and sickle signs and a lot more that we have already seen in the materials of the tactical groups of the 61st Marine Brigade and the 200th special forces Motor Rifle Brigade of the Northern Fleet that participated in the missions in Ukraine. 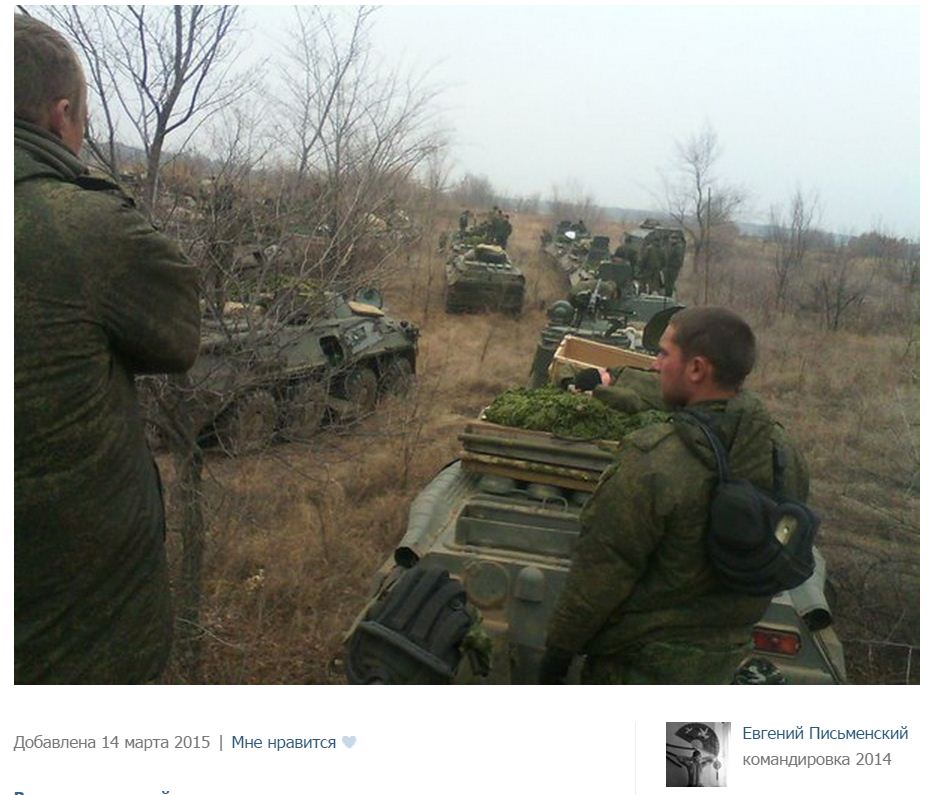 We should emphasize photos from the base camp in Millerovo and from the transit camp in Kamensky raion of Rostov Oblast near the Ukrainian border. Earlier we have tracked movements of military columns from this camp. Hence, the Russian tactical groups (including 61st Marine Brigade, 15th Motorized Rifle Brigade, 76th Guards Air Assault Division) were transferred to Donbas through these camps in Summer and Autumn 2014:
– 61th Marine Brigade of the Northern Fleet as Part of the Invasion Force (in Russian)
– Back to Basics: Russian Mercenaries Pretend to Be Peacekeepers 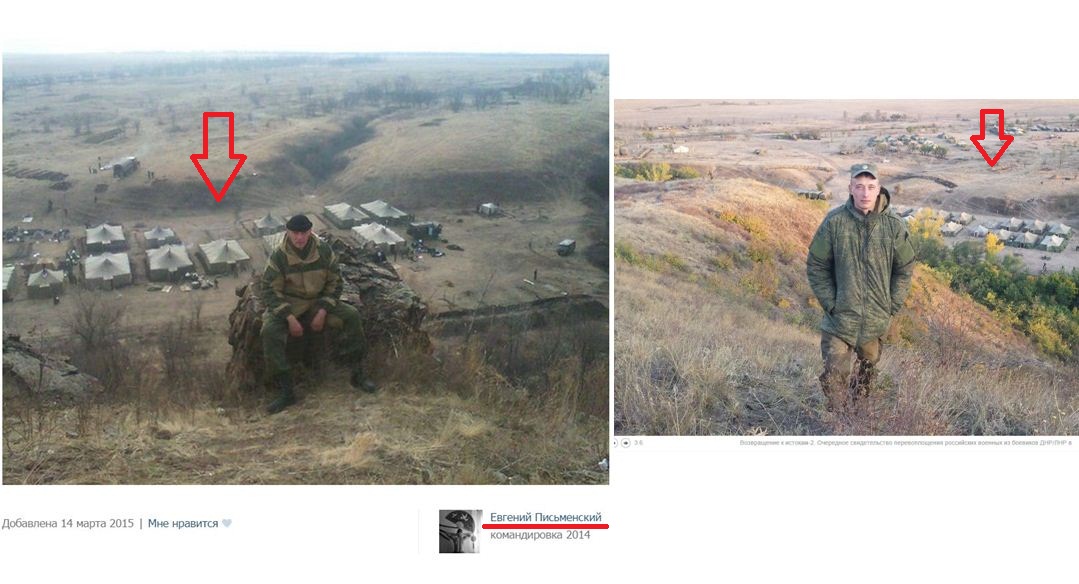 Based on the foregoing, we can conclude that Mr. Pismensky during the ‘Ukrainian campaign’ fought in the Task Force of the 61st Marine Brigade of the Northern Fleet.

The fact of the Northern Fleet personnel deployment to the ‘Ukrainian campaign’ was recognized in the Russian media. For example, there was a whole epic showdowns of prosecutors, on the basis of which, the Russian government tried to hush up the issue with the Russian military complains from Murmansk military unit  No. 10544.

Information about Mr. Pismensky is provided by friends and colleagues from ‘Myrotvorets‘ center. More information about Russian war criminals you can find by following a link to the Purgatory of The Peacemaker Project.

Please also check the other publications:

– Murmansk Media: Soldiers killed in Ukraine brought to Pechenga. September 12, 2014
– The Tour of Duty of the 200th Special Purpose Separate Motor Rifle Brigade of the Northern Fleet of the Russian Navy in Rostov Region and in Ukraine. December 1, 2014
– (in Russian) Multiple rocket launchers BM-21 Grad that were lost during the Fall of last year in Rostov oblast were found near Murmansk in a shoot down conditions. February 26, 2015
– (in Russian) 61th Marine Brigade of the Northern Fleet of the Russian Federation on the border with Ukraine. September 24, 2014

No Responses to “From Severomorsk to Donbas. ‘Vacation Photos’ by Marine of the 61st Brigade, Russian Northern Fleet in Ukraine”