The General in the Armored Car 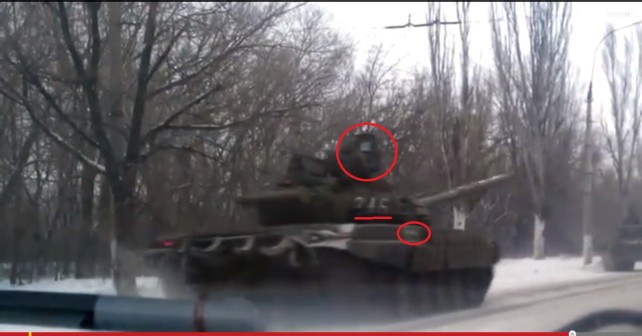 Lately I’ve been receiving a lot of questions about the Russian army convoy in Krasnodon.

It was obvious that with the appearance in Luhansk and Donetsk regions of the first camouflaged KAMAZ Mustang or Ural-43206 the answer to the question about the Russian army invasion of Ukraine became positive. Yes, Russian Armed Forces have invaded Ukraine, and the soldiers of this army are pretending to be rebels and separatists. And they are doing this very badly, considering the many failures reported in the media. There is nothing more to say about it.

Now let’s move on to something actually worth talking about. For complete clarity we will follow the sequence of events.

By December 2014, the Kremlin hit a dead end with its work on Novorossiya. No progress was being made, looting had become widespread, and the project wasn’t generating any income, even after the removal of factory equipment from the occupied territories. Only madmen or Zhirinovsky could argue for Kremlin’s political dividends after the outbreak of the bloody war in Ukraine. The coming new year demanded changes in the approach. And they happened.

Those changes were preceded by a meeting of warlords and Cossack atamans, held at the end of October 2014. First, they chose a new commander. Their choice was so strange that it would make one wonder about the voters themselves. How could separatists (in fact, citizens of Ukraine) manage to choose a major general of the Russian army as their commander? Moreover, this proposal was so attractive that the general could not refuse! That’s what the proper motivation can do.

Here is what that proper motivation was. Despite the fact that at least three of the five separate motorized rifle brigades of the 58th Army participated in the fighting in the territory of Ukraine from the very beginning of the war in Donbass, they hadn’t managed to achieve any significant success. Maybe the commander of the 58th Army lacked the urgency to succeed. The Kremlin had only one criminal case against the commander of the 58th army Gurulev, and even that one was laughable by the Russian army standards. Two of his subordinates served as batmen to the Chief of Staff of the Southern Military District. It goes without saying that in almost two years of their absence the men received not only salary, but also promotions to new ranks.

The case was filed in 2013, just before the invasion. But that didn’t sufficiently motivate general Gurulev. But it was very different with Kuzovlev. There was no criminal case against him, just a suit by the Academy where Kuzovlev was trained. Kuzovlev’s family took the apartments in Moscow reserved for him for the duration of the study, and didn’t vacate them when it was complete. And the state sided with Kuzovlev. Gagarin district court in Moscow ruled in favor of the defendant, citing the fact that Kuzovlev took part in the counter terrorist operation in Chechnya at that time.

At that time, in 2011, Kuzovlev was the commander of 18th Separate Motorized Rifle Brigade. But now we go back to 2014. Kuzovlev is no longer involved in military operations in Chechnya. That is, under the law it is time to vacate the living space. It’s time for the Kremlin to remind the general of his duty to his country and to send him to Donbass, where he could fight for the apartment in the capital. Now, after reading of the story about the Luhansk atamans’ council that assigned the active duty general of Russian Federation to the post of their top commander, it immediately becomes clear, who those atamans were: Shoigu, Medvedev, and Putin!

But Kuzovlev, even though he is a paratrooper, can’t cope with all the problems of the occupation by himself. Therefore, on December 21, to support Kuzovlev, the responsibility for humanitarian convoys (to call a spade a spade – the supply of ammunition and weapons to the limited contingent of Russian troops in Ukraine) is given to… Mr. Medvedev, the Prime Minister of the Russian Federation. Apparently, there are no problems left to solve in Russia. 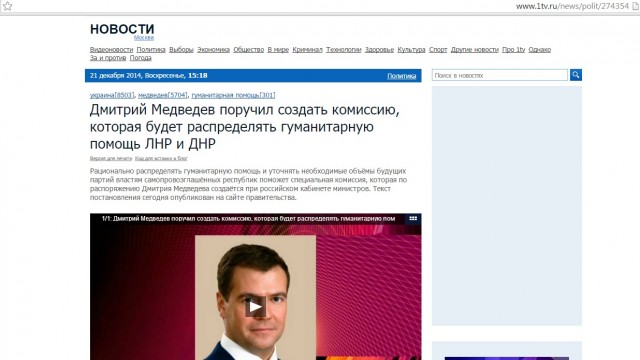 Then, the appointment of these gentlemen is announced to the entire world by one Dremov.

And now it becomes easy to explain what is happening. FSB appointees are leaving their positions under various pretexts, giving way to the hungry for action paratrooper and his army. The armored convoy of BPM-97 Vystrel “mobile intensive care” accomplishes two goals: shows to all, who the boss in the Luhansk neighborhood is now (of course, with the master’s permission) and helps the disagreeing vacate their dwellings. It is possible that after the appearance in the Luhansk People’s Republic (LNR) of the General with his own unresolved housing issues and the prospects to take the place of his boss, everyone will start looking busy and maybe even get some military action underway.

From the technical standpoint, the GAZ-39371 Vodnik with the open door was really surprising. It was not a hit in Russia, but 48 of those trucks were sold to Uruguay. Is Novorossiya now receiving “humanitarian aid” even from there? The door that can’t properly close in the cold only reinforces the suspicion that LNR is a dumping ground for rejected equipment. 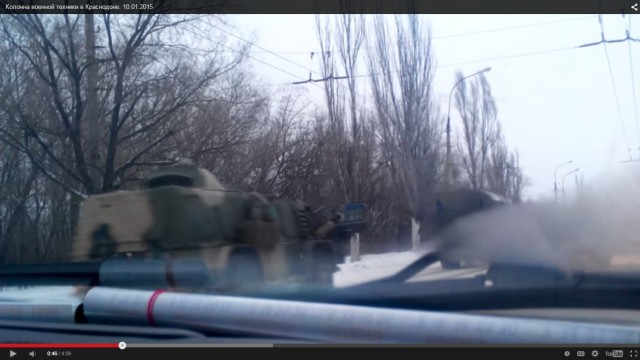 Another surprise was the appearance of three T-72 tanks in the territory of the so-called Novorossiya, with one of them carrying standard Russian army three digit number in addition to all the usual attributes of Russian tanks in Ukraine. 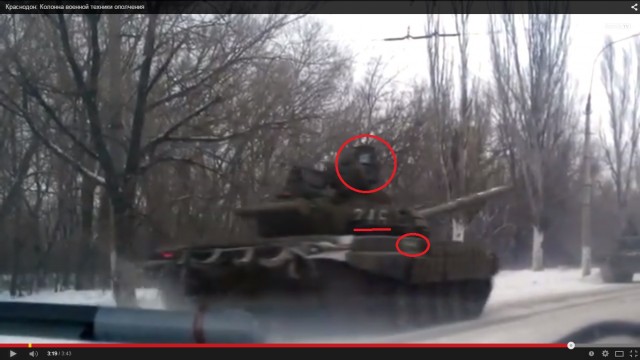 By the fall of 2014 the occupiers had developed a tradition T-64 tanks went to the LNR, T-72 tanks – to the DNR. The meaning of this decision is clear: this helps avoid problems with the concurrent servicing of two different models of tanks engaged in the same combat missions. This is difficult not only for the DNR or the LNR, but even for Russia. This approach has not been always followed, but the point still stands. And now the T-72s are going to the LNR again. Perhaps it is only an emergency solution, and they will soon go back to Russia. The future will tell.

And, finally, the trucks. In the past, they were always covered. This time, the contents of the cargo bed are visible to the naked eye: there are soldiers inside. 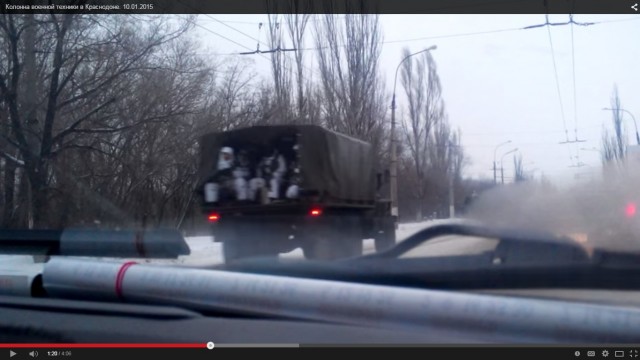 Now remember all the endless convoys of trucks driving along the roads of the so-called Novorossiya before our eyes throughout the year, and then add those that were brought to the borders of Ukraine in Russia. Try to count how many Russian servicemen they moved. Why was all this needed?

And for dessert I offer you another Kremlin’s lie/excuse. 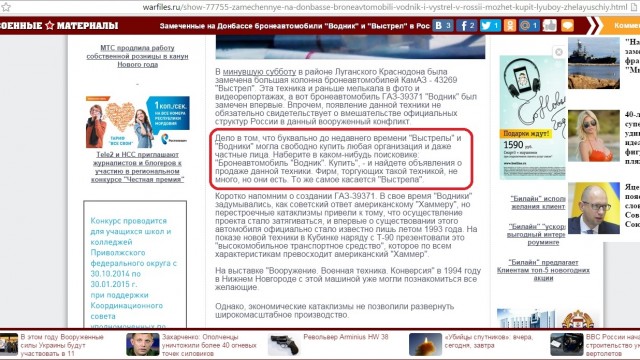 The story of the “purchases of armored vehicles by ordinary citizens” could be plausible, but it has one problem: the armored trucks are equipped with heavy machine guns (military weapons) and radios, which are clearly not included in the package. Neither is the ammo. However, it should be understood that if the Kremlin is still trying to cover up the obvious facts of its presence in Ukraine, then not all cards have been shown. So we will pay even more attention to the situation. And while this war continues, we will always have something to say.

13 Responses to “The General in the Armored Car”