The Holodomor as a genocide of Ukrainians who raised more than 5,000 anti-Soviet revolts in 1930-1932 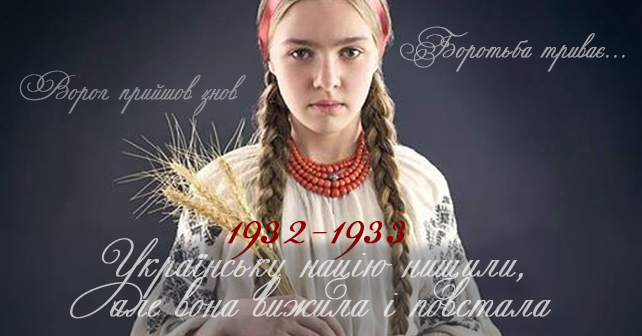 On the fourth Saturday of November, which fell on November 26 this year, Ukraine remembered victims of the Holodomor of 1932-1933.

According to the latest estimates by demographers, the Holodomor – a man-made famine during 1932-1933 – killed 3.9 million people. About 600 thousands more were due to the consequential loss of the unborn.

On November 28, 2006, the Verkhovna Rada adopted a Law “On the Holodomor of 1932-1933 in Ukraine”, which officially recognized these events as the genocide of Ukrainian people. Public denial of the Holodomor in Ukraine is considered a desecration to the memory of millions of victims and humiliation of the Ukrainian people and is unlawful.

More than 20 countries have recognized these tragic events as a genocide or crimes of the Stalin regime The UN General Assembly, UNESCO, the OSCE, and the European Parliament adopted similar resolutions. The Russian Federation, which considers itself a successor of the Soviet Union, does not recognize The Holodomor of 1932-1933 as a genocide of the Ukrainian people.

It is noteworthy, that Dr. Raphael Lemkin, the author of the concept of genocide and one of the initiators of the Convention on the Prevention and Punishment of the Crime of Genocide, adopted by the United Nations in 1948, considered the Holodomor a genocide of the Ukrainian people.

Though at that time hunger affected vast areas of the Volga region, Western Siberia, Southern Urals and Northern Kazakhstan, the Stalin regime was purposely murdering Ukrainian peasants by taking away their entire food supply. This policy was accompanied by repression against Ukrainian intellectuals, Ukrainian churches, industrial personnel, and even against Ukrainian Soviet leadership. By doing so, the Kremlin tried to suppress rebellious Ukraine at the time of failures in building a communist society in the early 1930s and fears of military intervention from the West.

Before the tragedy, in August 1932, Stalin wrote to Kaganovich: “The most important issue right now is Ukraine. Things in Ukraine have hit rock bottom. Things are bad with regard to the party. There is talk that in two regions of Ukraine (I think it is Kyiv and Dnipropetrovsk Oblasts) about 50 district party committees have spoken out against the grain-procurement plan, deeming it unrealistic. […] Things are bad with the GPU. Redens is not up to leading the fight against the counterrevolution in such a large and distinctive republic as Ukraine. Unless we begin to straighten out the situation in Ukraine, we may lose Ukraine. Keep in mind that Pilsudski is not idle, and his agents in Ukraine are many times stronger than Redens or Kosior think. Also keep in mind, that the Ukrainian Communist Party (500,000 members, ha-ha) has quite a lot (yes, quite a lot) of rotten elements, conscious and subconscious Petliura adherents, and, finally, direct agents of Pilsudski. As soon as things get worse, these elements will waste no time opening a front inside (and outside) the party, against the party. The worst aspect is that the Ukraine leadership does not see these dangers.”

For a long time, even after the declaration of Independence of Ukraine in 1991, there were a lot of myths that created the image of tormented and weak Ukrainians who resigned to repressions, were starving to death, and ready to be slaughtered, but did not resist the Soviet regime. Thus, a sense of fear and submission to the almighty Empire (which the USSR was associated with at that time) was formed. 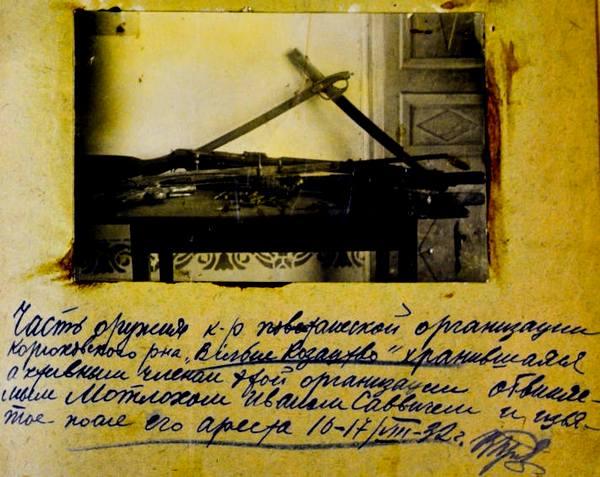 In the photo: weapons seized in Koriukivka Raion of Chernihiv Oblast in 1932. According to the documents from archives, the weapons belonged to Vіlne Kozatstvo, an “anti-revolutionary organization”.

In fact, the tragic events of 1932-1933 were preceded by the active resistance of Ukrainian peasants to collectivization. From February – March 1930, the GPU (secret police) recorded “riots” in 1,895 villages in 41 of out of 44 districts of Ukraine. Peaceful peasants’ protests often grew into the killing of local government and communist activists. That year, there were more than 4 thousand mass protests in Ukraine, in which about 1.2 million people took part, according to researchers’ estimates. In various regions peasants gathered into armed groups and mass uprisings even took place. The most famous of those was the Pavlograd uprising which in the beginning of April 1930 spread over a dozen villages and hamlets of Dnipropetrovsk Oblast.

In 1931, the GPU in Ukraine noted activity of 28 political “gangs”. During the first 7 months of 1932, the GPU recorded more than 900 riots in Ukraine, which accounted for 56% of all anti-communist riots in the USSR. In the same period, 41,200 families withdrew from soviet agriculture collectives, about 500 village councils refused to accept unrealistic grain procurement plans. 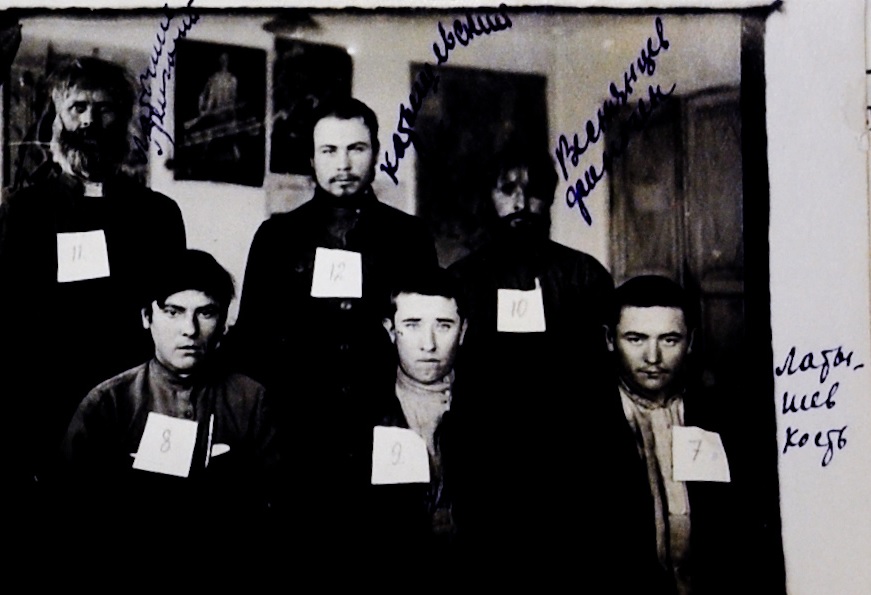 Group photo of detained Ukrainian rebels who fought against the Soviets, from archives. 1930. The photos was taken in Osinovsky Raion, Donetsk Oblast, Ukraine.

Even when most of the pockets of resistance had been crushed, and the government took food by force from the peasants, they did not submit. Starving people attacked granaries where the collected grain was stored, quit work in agriculture collectives, and raised arms whenever it was possible. In 1932 there were more than 1,000 recorded acts of armed resistance to the regime.

When we honor victims of the Holodomor, we remember people who struggled, fought and died for their freedom and their right to live. In the XXI century, we are facing new aggression by the old enemy. Like 83 years ago, it has come to kill Ukrainians, to occupy the Ukrainian territory, to impose its regime, and to establish its rules that have no room for freedom and development, but only oppression and dictatorship.

No Responses to “The Holodomor as a genocide of Ukrainians who raised more than 5,000 anti-Soviet revolts in 1930-1932”