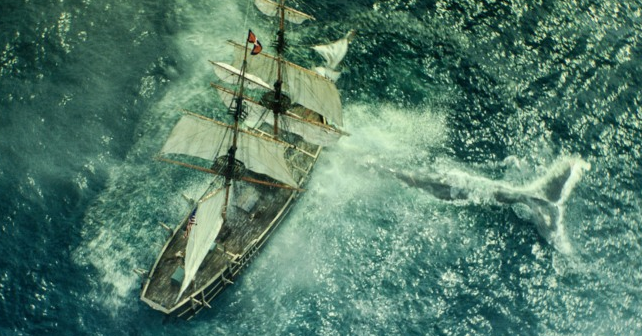 On June 6 2016 ordilo.org published an e-mail archive of Elena Nikitina , so-called “Minister of Information” of the Donetsk People’s Republic (DPR) terrorist organization. The archive of about 11Gb in size contains almost 10 thousand messages from February 2015 till April 2016. Important part of the archive makes the correspondence of Nikitina with someone called Alexander, e-mail address: [email protected] [Editor’s note: Russian word “kashalot” stands for “sperm whale”]. Their correspondence counts about 400 messages, i.e. it was almost daily. The nature of the correspondence of Nikitina with Alexander, the Sperm Whale, leaves no doubt of their working relations – Nikitina is a subordinate and Alexander is her supervisor. Here we quote a few examples from their mail exchange:

1. Nikitina to Kahsalot: “I WAIT for an OK to forward it to Msk” /i.e. Moscow/ (message dated Feb 28, 2016, sent by editor11). The message contains an attachment with the application for equipment for the DPR.

2. Kashalot to Nikitina: “The video is good. But Gubarev is strictly off-air till the 15th.” (message dated Feb 08, 2016, sent by Alexander). This is clearly a response from a superior to a subordinate to a question about demonstration of a video with Gubarev [Editor’s note: Pavel Gubarev, one of the leaders of the DRP terrorist organisation].

3. In a message dated Feb 09, 2016, Alexander writes to Nikitina: “Andrey asks to organize a meeting of chief editors of the DPR media, with the representatives of the Ministry of Defense, Ministry of State Security and policy advisors (i.e. us with Andrey)))). Subject: Organization of interaction, media planning, implementation of ad hoc projects.” After a short discussion, the meeting was scheduled for Friday, Feb 12. Whereas on Monday, Feb 15 the “Ministry of Information” distributes a newsletter to all other “DPR ministries” (see message dated Feb 16, 2016, sent by Alexander):

The message can be found in the mail archive of the so-called Ministry of Transport of the DPR, published earlier by Eugene Dokukin. Who is this supervisor under the account name kashalot74, aka Alexander? First, in the same archived emails of Nikitina, there is a message dated Feb 19, 2016, sent by one Ms Pershina to kashalot74. The message begins with a greeting: “Good day, dear Alexander Pavlovich!“ Let us remember the patronymic.

Further, we go on looking on the My World social network which is known to be an extension of the mail.ru web service, where we find the account of this e-mail address owner.

The account is empty but we note the date of birth – May 7, 1974 . Next, we proceed to Zello, an internet radio service popular with the Donbas separatists. Here, we can search users by their e-mail addresses, and we find that the address [email protected] is associated with the user with an identical nickname kashalot74. Here is his account: 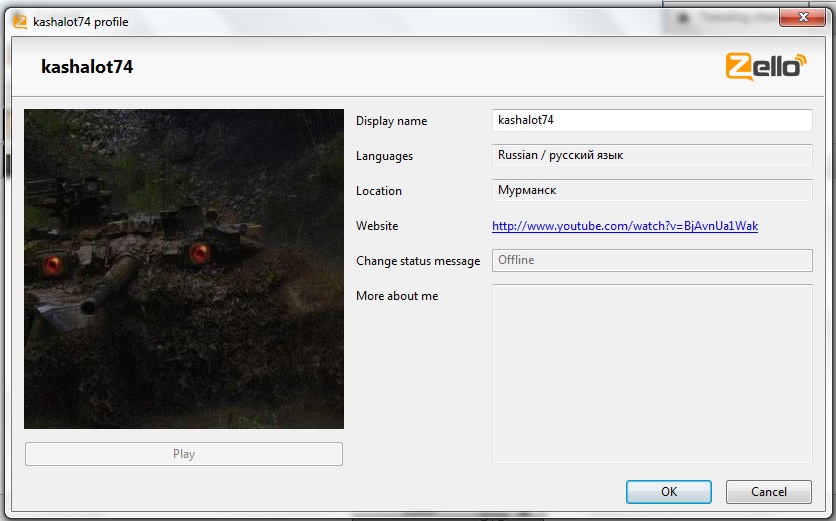 Let us remember the location city marked in this account: Murmansk. Our next source of information is Youtube. A user under the nick Vladimir Auto gathered a large collection of communications recorded on Zello. One of them is of interest for us, News of July 3, 2014 from kashalot74 (Alexander) (back-up copy of the video here). The recording is a story from a Zello user named Alexander, nicknamed kashalot74, the Sperm Whale already familiar to us. He offers the details of his trip to Kramatorsk, Ukraine, delivering “humanitarian aid” from Murmansk in early July 2014. We will touch upon this trip later on. But now, let us have a closer look at the upper right corner of the screen – the conversation takes place on the Zello channel titled “Kashalot News”. As it appears from the conversation, kashalot74 is the founder and main moderator of this channel. At 01:02 of the video our Sperm Whale character says the following: “A new card is announced, I asked to publish it together with mine in the group.” This refers to raising funds for “humanitarian aid”. We are getting close to our goal. It is easy to find the group Kashalot News on the Russian social network VKontakte.ru. Among the discussions in the group, we can find a subject Collecting aid for Novorossia where we can see the details of the card: 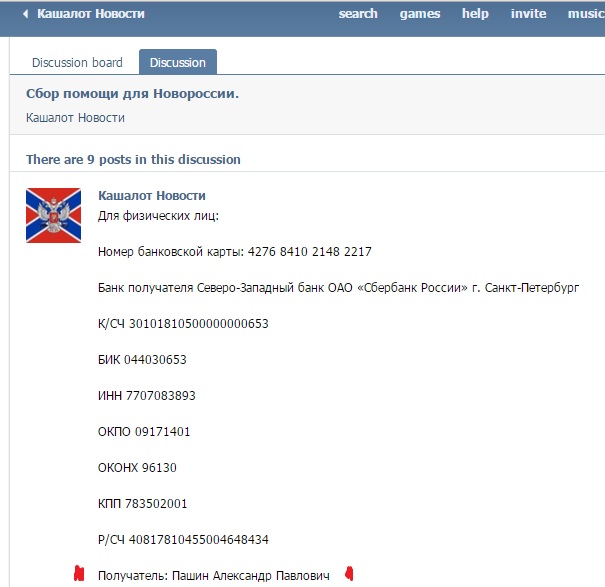 The indicated card holder and funds recipient is Alexander Pavlovich Pashin. Let us get to know him better. Alexander Pashin from the city of Murmansk has accounts on social networks: VKontakte and Odnoklassniki: 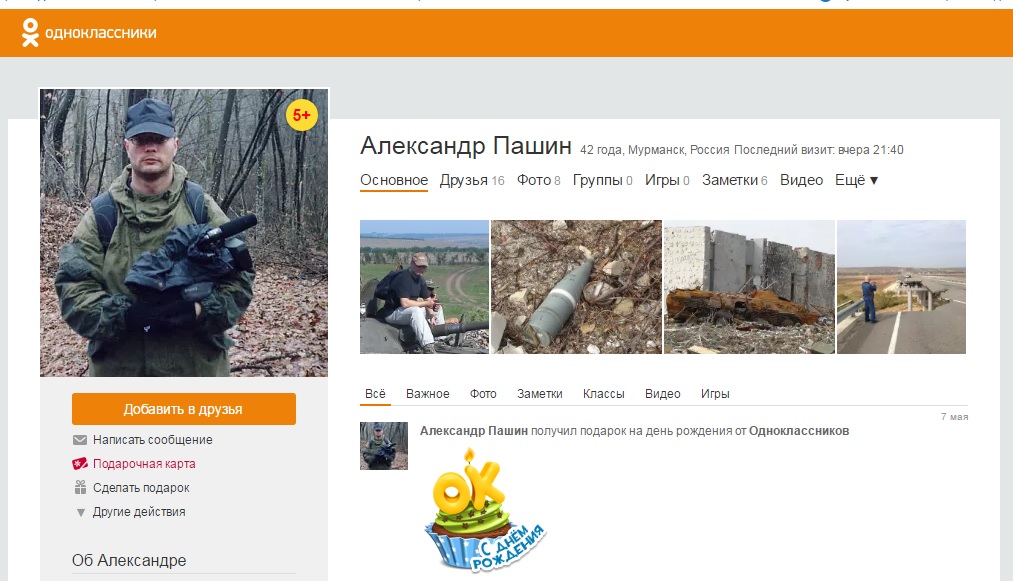 Please note that a birthday e-gift from Odnoklassniki appeared in his account on May 07, while the account on VKontakte contains the full date of birth: May 07, 1974. Hardly a coincidence with the address (kashalot74) on mail.ru. Going through the photos of Alexander Pashin we again come across his patronymic – Pavlovich. 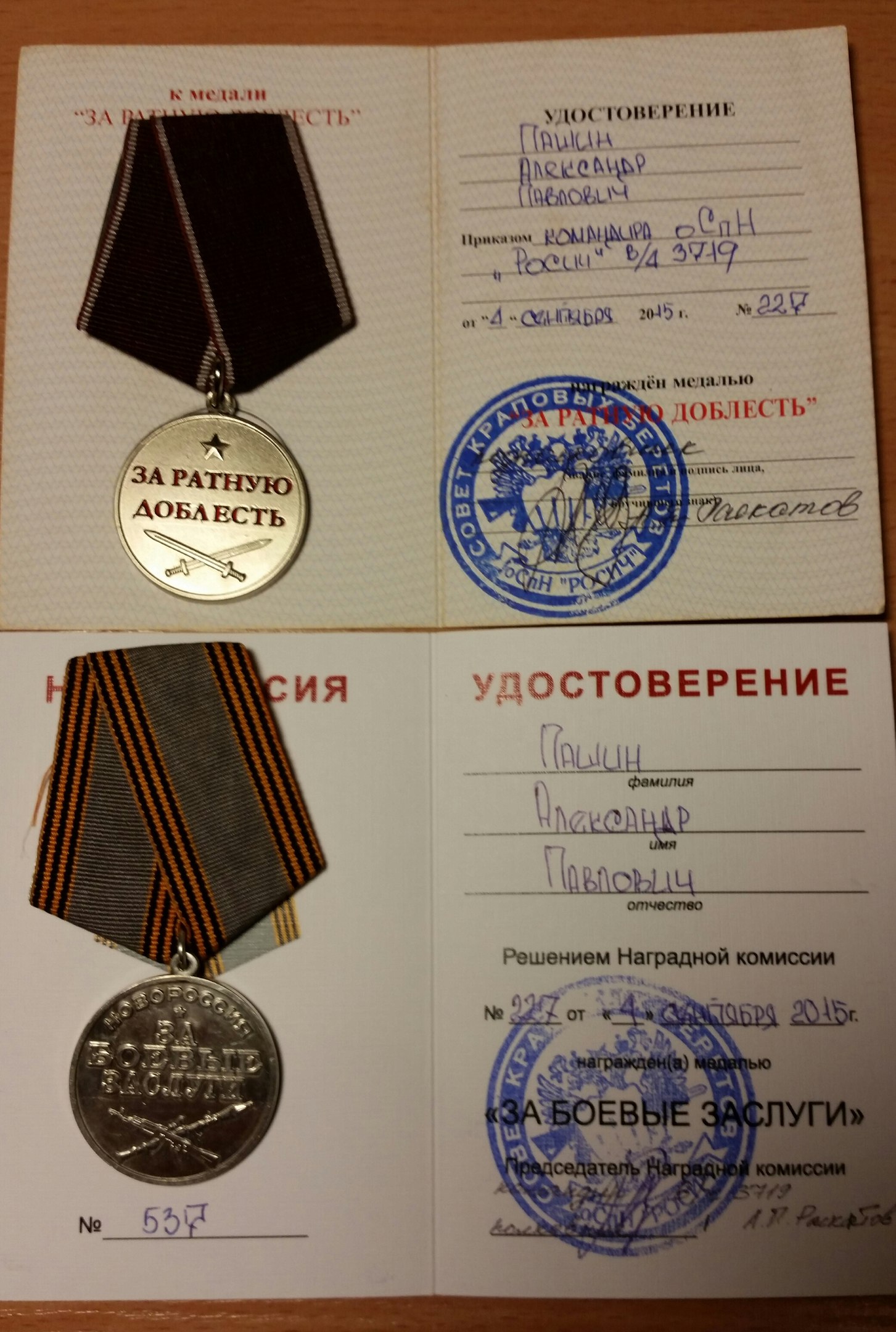 The medals received from the DPR terrorist organization granted Pashin a well deserved place in the “Purgatory” database of the Myrotvorets web site.

The travel of Pashin to Kramatorsk in early July 2014 is very well documented on various web sites. The details of the trip precisely correspond to the Kashalot story on Zello, corroborating our findings. The Murmansk TV channel TV21 shot a film in three parts about this assignment (part 1, part 2, part 3). At the end of the first part, the journalists are interviewing Pashin, and his voice sounds identical to the voice of the Kashalot, aka. Sperm Whale character on Zello. In the same group named Kashalot News on the VKontakte network, there is a photo report about this trip. Some photos on the page of Pashin complete the picture e.g. this one taken in front of the 24th school shelled by terrorists. 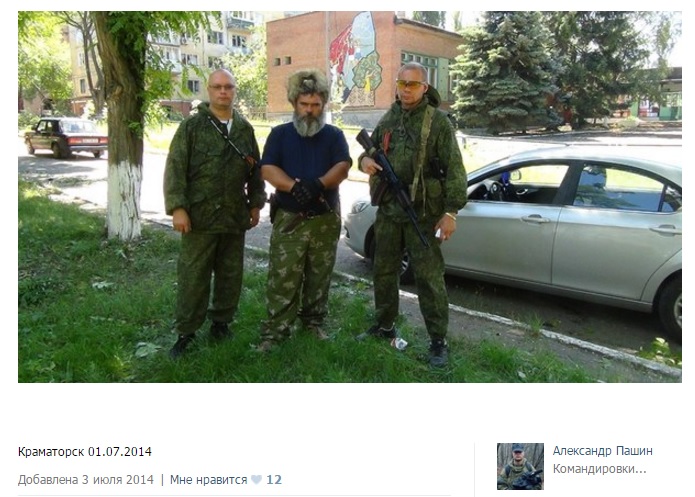 Finally, here is a large photo report on the trip published on Live Journal. If you wish to scroll to the very end you can see the following comment discussing if any aid “got into the hands of Ukies”:

The answer of [email protected] leaves no doubt that it comes from an active participant of the events not a casual reader (“The aid was distributed in one hour upon our arrival. Everything was taken along upon retreat”).

The content of the “humanitarian aid” delivered by Pashin to Kramatorsk is clearly exposed by some photos from the Kashalot News group: (a PN-23 night sight and an AL6 mounting bracket for the sight) 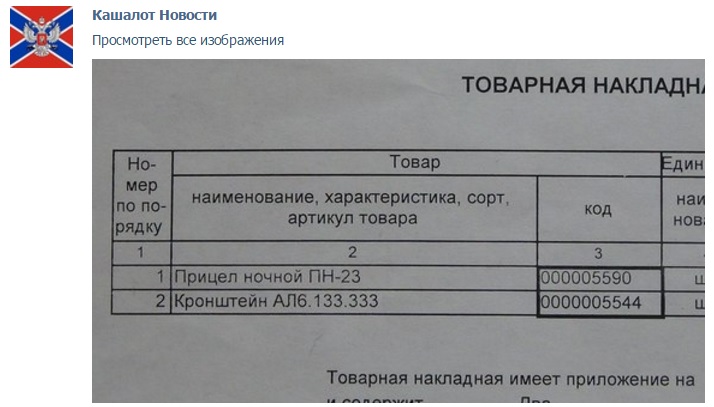 Here you can see better the part of content of the minivans, which was deemed not too incriminating to be shown openly. But what Pashin omitted, can only be guessed; e.g. blogger51 noticed that the ammunition left behind by retreating terrorists and found by the Ukrainian Army immediately after the liberation of Slavyansk had been brought from the Murmansk Oblast, Russia. Another interesting coincidence…

There also are some details of interest in the biography of Pashin, which can be found online. He started his career as a journalist, but not an ordinary journalist. Here is a photo form the stormy days of his early career – Dagestan, 2000: 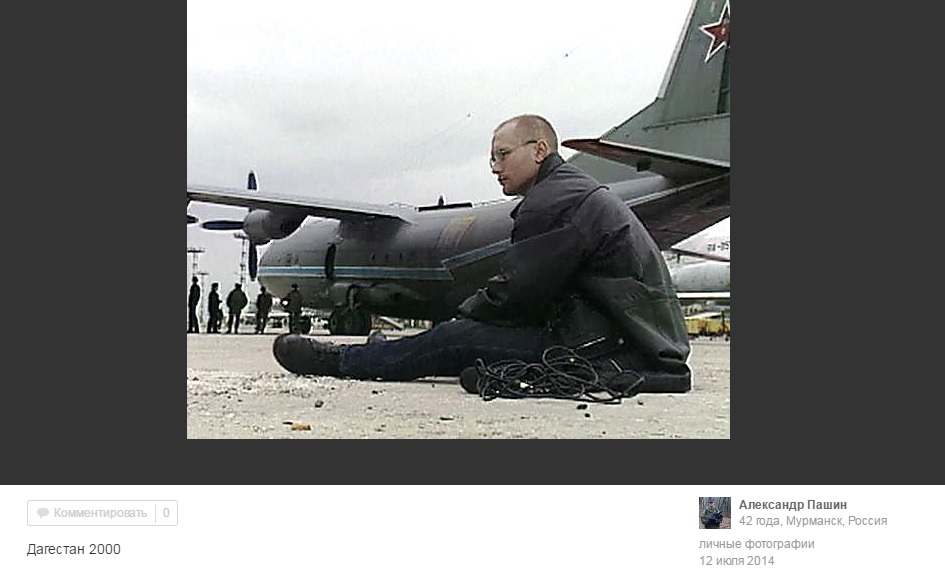 In 2002, journalist Alexander Pashin writes an article about the lifting operation of the sunken Kursk submarine. At about the same time (the third year into the second Chechen war) he films the operation of FSB special forces in Chechnya. Pashin himself appears in this story at 0:30 and at 3:50; while at the end of the video at 6:47 the author of the video announces himself as “Alexander Pashin, for “Itogi” from Chechnya”. It seems in the early 2000s Pashin was attached to the Orca unit of FSB Special Forces stationed in Murmansk Oblast. Among the videos of Pashin’s account on VKontakte there are a few clips, starting with the same author’s logo. One of these videos made it to the special forces’ website: 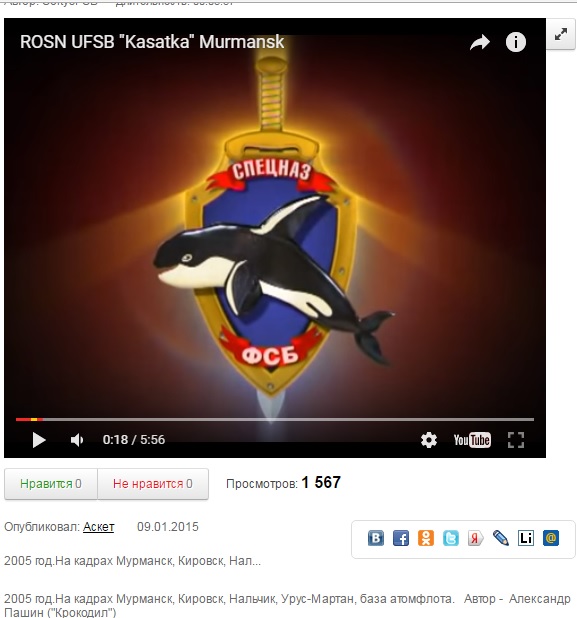 Alexander Pashin is marked as the author of the video, dated 2005. Back then, he was a “Crocodile”, not a “Sperm Whale” yet. There is another video with the same logo called “10 years of the Orca Special Forces Unit of the Federal Security Service of Russia in the Murmansk Oblast”. The Orca unit was formed in 1994, thus this video is dated 2004. By 2009, with the end of the Second Chechen War at hand, valuable field personnel is becoming increasingly needed at administrative positions. In summer 2009, Pashin works in the administration of the city of Murmansk. In August 2009 he is appointed head of Media Relations Department at the city administration of Murmansk. In 2010, he is mentioned holding the same position. Even earlier, in March 2009, the owner of the account [email protected] makes the following comment (at the bottom of the page), demonstrating his full awareness of the local Murmansk politics: 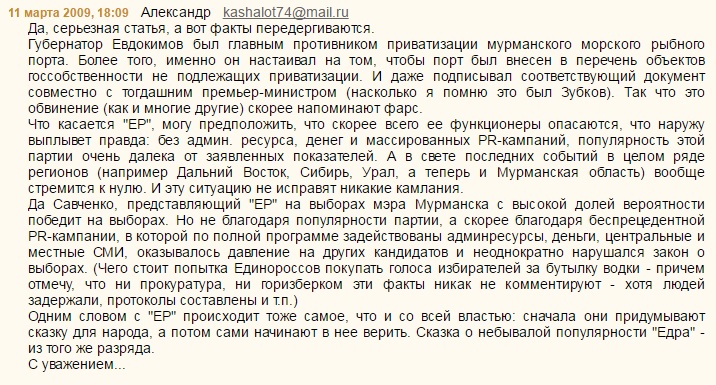 Pashin worked for a while in the Human Resource department of the Murmansk city administration (it was not possible to date this page). The role of Pashin in the coordination of the terrorist media in Donbas was noticed by Russian anti-propaganda bloggers back in April 2014: 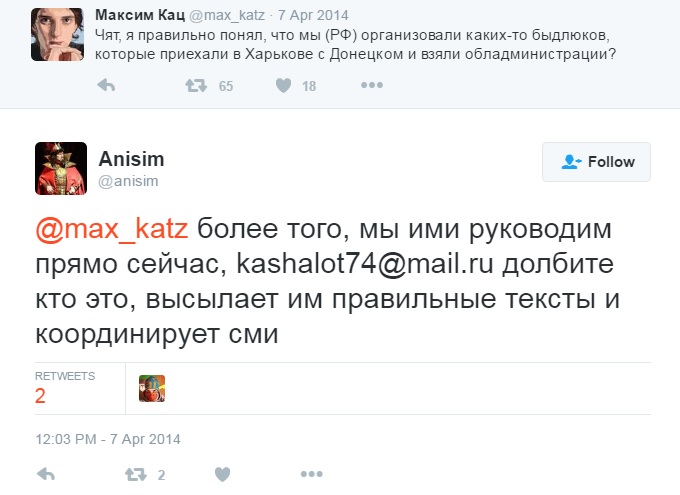 Unfortunately, at that time he did not receive due attention… The correspondence of Nikitina with Pashin shows that in April he lived in Donetsk, and they met regularly. He was there also in the beginning of May 2016: photographed the parade of May 9 and made a selfie with one of his charges. 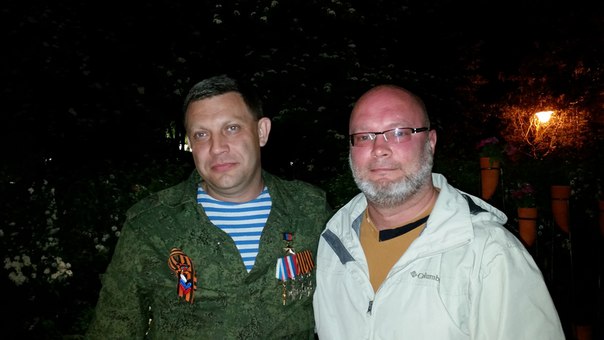 Pashin’s photos of the parade were published by SeverPost news agency which is referring to him their reporter. Obviously, this is his current cover position.

P.S. It seems that Pashin, although cleverly disguised as a journalist, is a lower-level supervisor making sure the instructions from Moscow to the subordinates in the occupied territories are correctly understood and followed.

This material was prepared for publication by Maria Golubeva specially for InformNapalm.