InformNapalm Summary: Analysis of Possible Militants’ Activities in the Donetsk and Artemivsk Areas 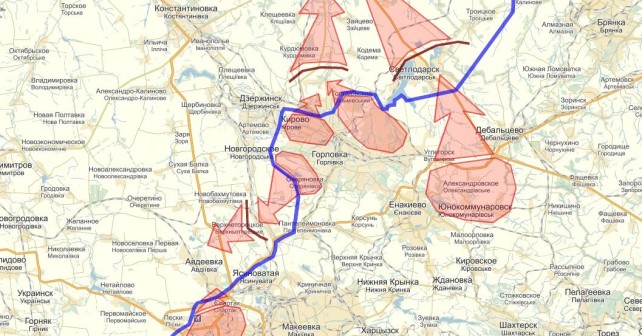 For the first time in the past six months, I got around to writing an analytical summary of the events at the eastern frontline. This has become a hard task due to a lot of insider information and a lot of confusion. I planned to prepare a map, but even the General Staff has no reliable information on the actual configuration of the line of contact. Both sides of the conflict occasionally take or leave locations or high grounds. Militants are assimilating en masse, trying to penetrate to the liberated territories, so it is no longer clear which territories are actually controlled by the Ukrainian authorities, and which only seem to be under the Ukrainian control. So, I chose the optimum alternative, namely, to use the map with the demarcation line as of June 2015, when the last summary was published.

So, what do we have today? After a series of terrorist attacks in Europe, which the Russian president tried to link to ISIS, it is very likely that the hostilities in the East of Ukraine would resume.

First, let’s have a look at the areas on which the insiders of the InformNapalm international volunteer community have the most information.

Donetsk. In Donetsk, the arrival of up to 600 servicemen of the Caucasian origin has been reported. Besides, there have been changes to the management of the ‘Vostok’ brigade, where local fighters were replaced by ‘holidaymakers’ arriving from Russia. According to the information that needs to be double-checked, a battery of ‘Uragan’ [Hurricane] MLRS has been deployed near the Lidiyivka coal mine. The relocation of equipment and personnel along Petrovskoho St. in the direction of the village of Maryinka has been reported. In this way, we can make the assumption that the forces necessary for the attack on Maryinka and Krasnohorivka are being accumulated in the western outskirts of Donetsk. What do the militants want to get? Access to the town of Kurakhovo and control over the Kurakhovo TPP as a lever of pressure on Akhmetov. Further evidence of militants being trained for the possible attack in the western direction is the arrival to Donetsk of a large number of command and staff vehicles and electronic warfare equipment. Another group is being formed near the Donetsk airport. According to the insider information, “4 EW vehicles + command and staff vehicles + 1 Ural truck with servicemen moved along Universytetska St. towards the Airport”. Most likely, these forces are being accumulated not for the attack on Pisky, but for the start of an offensive to capture the town of Avdiyivka. But before that, the terrorists will try to push the Ukrainian forces out of Butivska coal mine. To support this assumption, the following information can be added: “40 trucks moved towards Donetsk via Makiyivka ring road. Not the humanitarian convoy. + 2 Ural trucks with servicemen. ALL of them have the Russian license plates,” “Some tracked vehicles (but not tanks) just entered Makiyivka from Khartsyzsk. They move very slowly towards the downtown.” On November 14, migrant special equipment of the Russian occupation forces was also spotted.

In this way, two strike groups have been formed in Donetsk. Today we can already witness the first of probes into the Ukrainian defense lines. For instance, on Friday and Saturday nights it was very noisy in the areas that are believed to be the main attack directions.

The second location on which we will focus is Horlivka, to which Givi, Motorola and a Russian general paid a visit two days ago. During this visit, they assured that Artemivsk would soon return under the control of the ‘DPR’. This is not yet a reason for worrying, but what I am concerned about is the deployment to the east of the town of Horlivka (near the village of Bulavinske) of an artillery brigade group and of a large numbers of personnel with military equipment. However, ​​terrorists have one of their training centers in the area, which may be an indication of preparations for a routine exercise just as well as an evidence of the possibility of an offensive from depth. At the same time, it should be noted that the visiting field commanders and their curator focused on the Kalinin district of Horlivka, which, together with the village of Holmovsky, poses a threat to the Ukrainian forces that took up defense in the village of Zaitseve. Besides, on 11/14/2015 the relocation of tanks, armored personnel carriers and infantry combat vehicles in the direction of the village of Zaitseve was reported. With this in mind, counter-attacks aimed at surrounding the defense positions of the Ukrainian forces in Zaitseve, gaining control over the T0513 highway and continuing the offensive in the direction of Artemivsk seem possible. At the very moment when the Ukrainian forces will try to stop the advance of the enemy in the above direction, an offensive from depths might follow from the direction of Bulavinske. Its objective would be eliminating a bulge near the village of Myronivsky and capturing it in order to gain control over the M03 highway and approach Artemivsk from the south.

Desperate to take the town of Dzerzhynsk from the direction of Horlivka, the militants started building up forces near Shyroka Balka ravine (at least five infantry combat vehicle arrived to the ravine this week) and the village of Verkhnetoretske (on Friday, they tried to probe into the checkpoint in Verkhnetoretske). The capture of the village of Verkhnetoretske would give the militants access to Avdiyivka from the north and close the mousetrap around the city. We should also keep in mind the questions about the plant in Avdiyivka, to which we still don’t have the answers.

If they capture Avdiyivka, the terrorists would gain control over the N20 highway and carry forward the advance toward Kostyantynivka.

In this article, we have only examined the areas on which we have enough information for a more or less thorough analysis. In the future, we will try to update the information and to extend our analysis to other sectors of the frontline.

No Responses to “InformNapalm Summary: Analysis of Possible Militants’ Activities in the Donetsk and Artemivsk Areas”