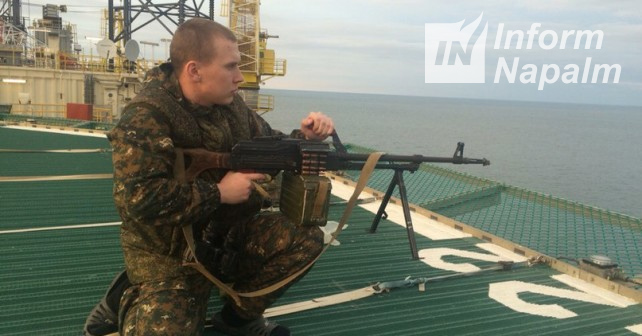 InformNapalm international volunteers society continues to trace the fate of the Ukrainian drilling rig systems, seized by the Russian military in the Black Sea. Just to remind, in September of 2015 InformNapalm already informed about raider actions of Russia regarding illegal armed seizure of two oil platforms, known also as “Boyko’s drilling rigs”. We have figured out, that servicemen of the 104th airborne regiment of the 76th division of the Russian Federation’s airborne forces were responsible for this operation. After five month since the last publication we were able to clarify some circumstances of platforms’ migration, and specify the Russian military units currently guarding these objects.

According to the information of the State Border Guard Service of Ukraine from December 15, 2015, a group of ships and boats of the Maritime Border Guard, using radar and other surveillance means had monitored surface picture in the territorial waters and exclusive (sea) economic zone of Ukraine. “As a result of these activities we found out, that ‘Petro Hodovanets’ and ‘Ukraina’ jack-up drilling rigs (JURs) have been moved from the zone of Odessa natural gas field closer to the Crimean peninsula (location to be defined). Also, the Russian side placed illegally seized ‘Tavryda’ oil drill platform on-site where these jack-up rigs were mounted before, co-ordinates: 45°12’N 30°59’E”, as the border agency reports.

Here you can see the location and the distance to the Odessa Oblast coastline (100 km) and Crimea (120 km). Odessa natural gas field itself is located on the shelf 150 km to the west from Crimea and 130 km to the south from the city of Odessa. The capacity of the field is estimated in 22 billion cubic meters of gas.

Appurtenance of gas field to the economic zone of Ukraine is stated also by the norms of the international law. According to it, an exclusive economic zone is an area outside territorial sea and adjacent to it, covered by special legal regime. Its width cannot go beyond 200 sea miles (370.4 km) as measured from coastal lines. Location of economic zones is shown on the map of the failed Turkish Stream 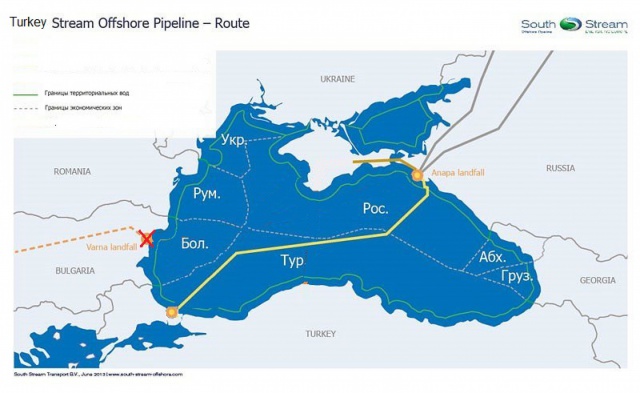 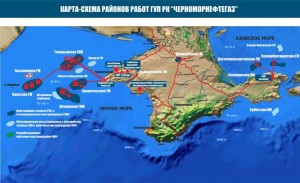 In its turn, ChernomorNaftoGaz confirmed that two new JURs were moved from Odessa shelf gas field. The Russian media reported, that the operation was ‘made promptly according to an order of Sergey Aksenov, the chief of the Crimean republic’ and was caused by ‘complicated international situation and risks to lose vitally important assets’. Drilling rigs were transported under the escort of FSB’s boats and a missile boat of the Russian Black Sea Fleet.

What can we note at the moment?

‘Petro Hodovanets‘ and ‘Ukraina‘ oil platforms continue to be guarded by the Russian military servicemen, who even met the New Year in the sea. Information and photographs from the profiles in social networks of several servicemen confirm this fact. Some details were clarified thanks to the webpage of Aleksandr Alimov (archives of the already deleted profile, albums, contacts), a soldier of 25th separate special forces regiment of GRU. 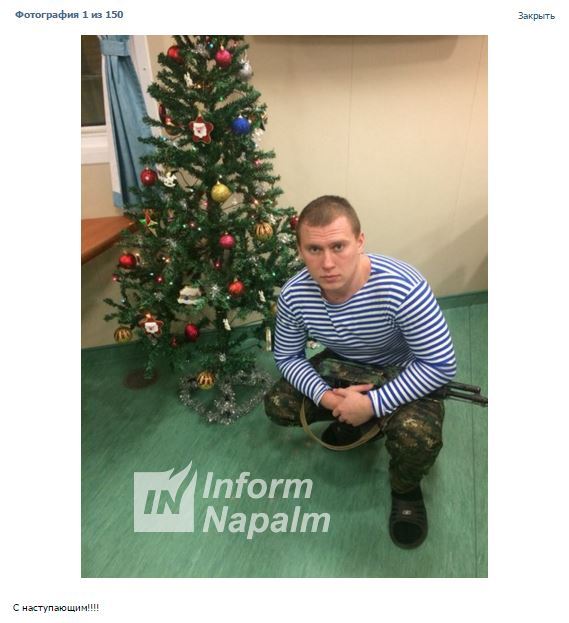 On December 15, 2015, the day of the JURs translocation operation, Aleksandr Alimov also was on one of the platforms as evidenced by his photo. He visually observed the water area perimeter-wise. 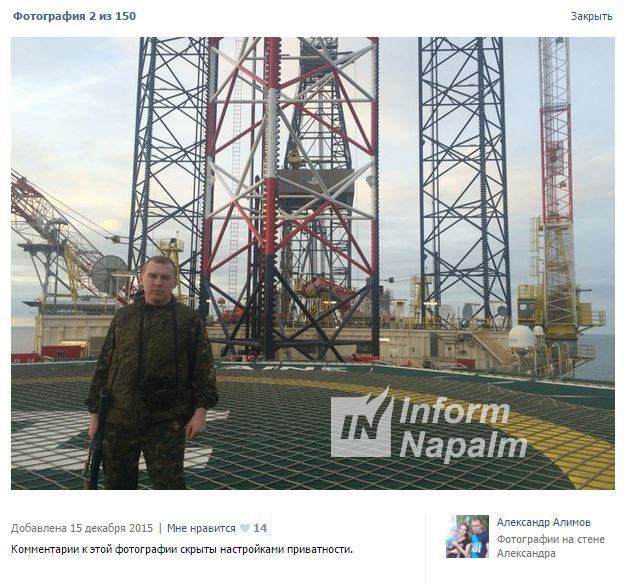 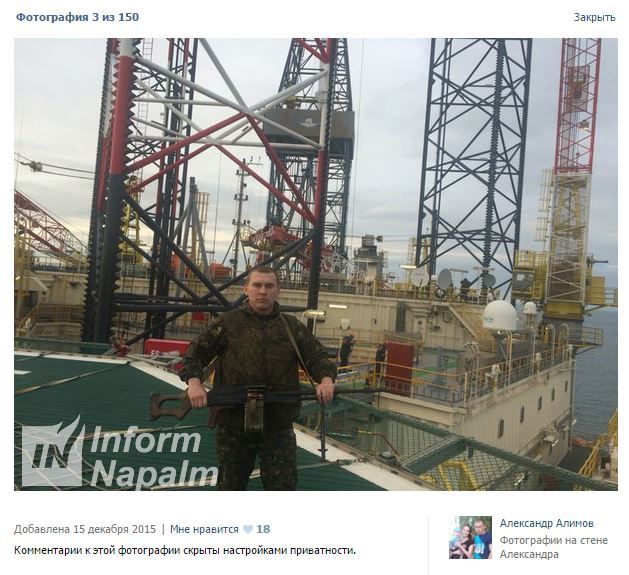 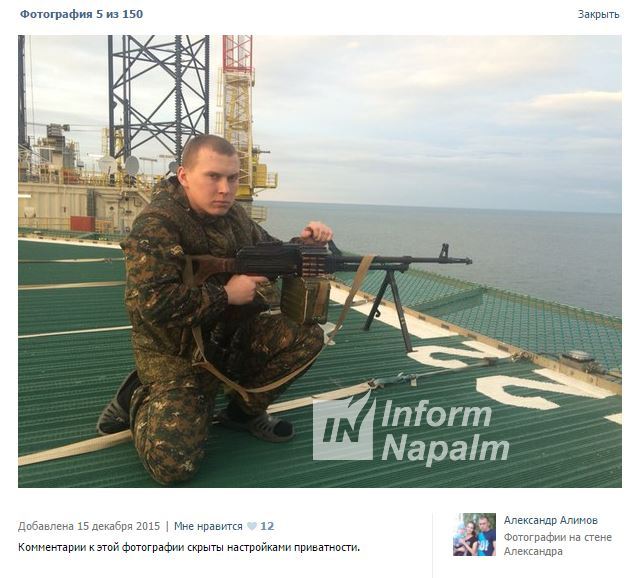 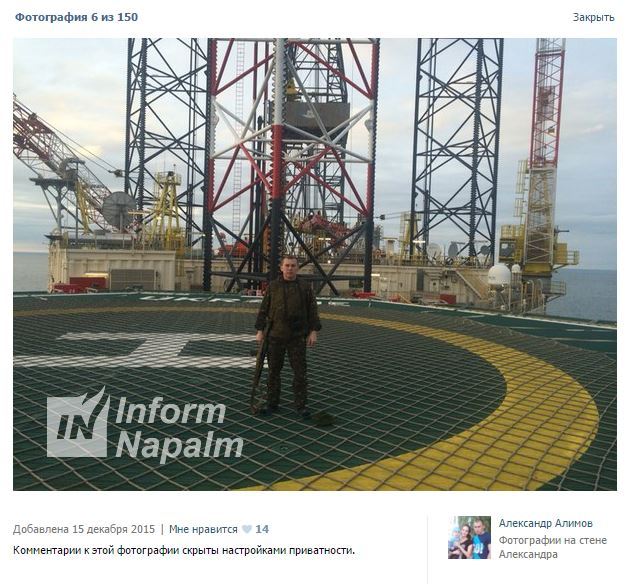 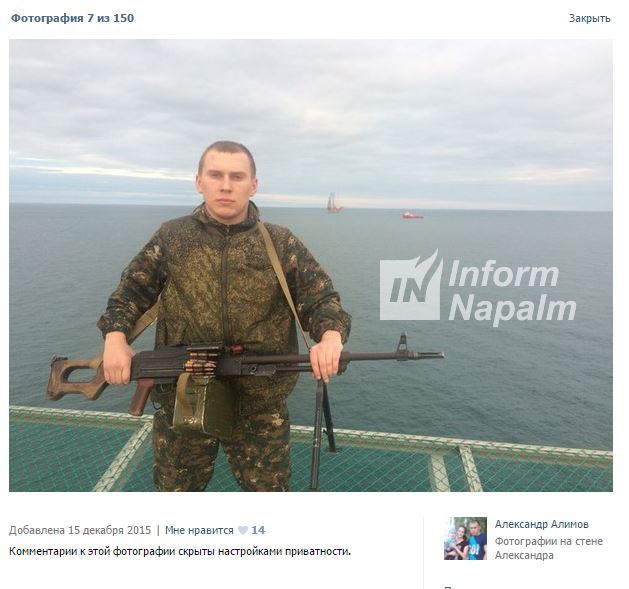 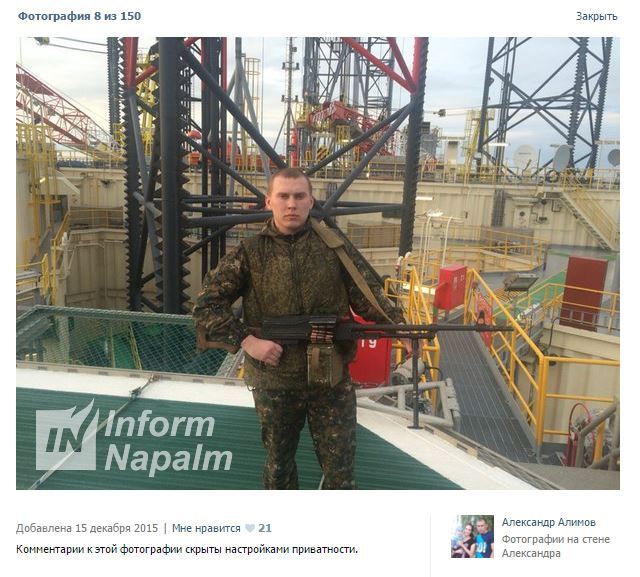 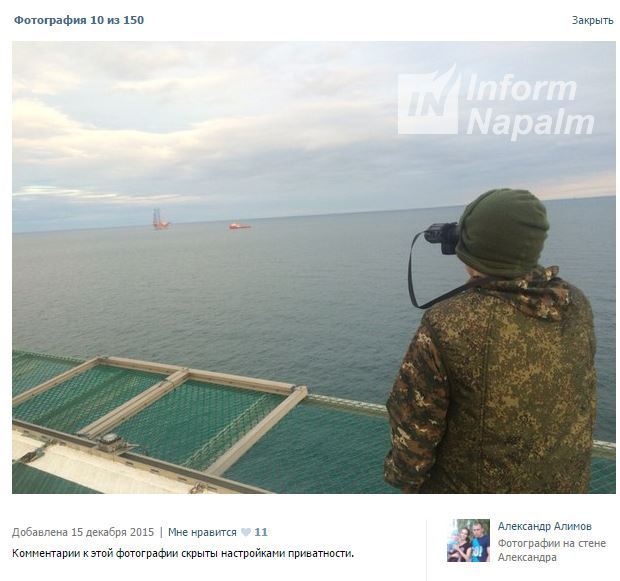 We can say that Alimov served in the Russian Strategic Missile Troops in Znamensk from June of 2013 till June of 2014. In December, 2014, he signed a contract for the service in 25th regiment of GRU’s special operation forces (Stavropol). 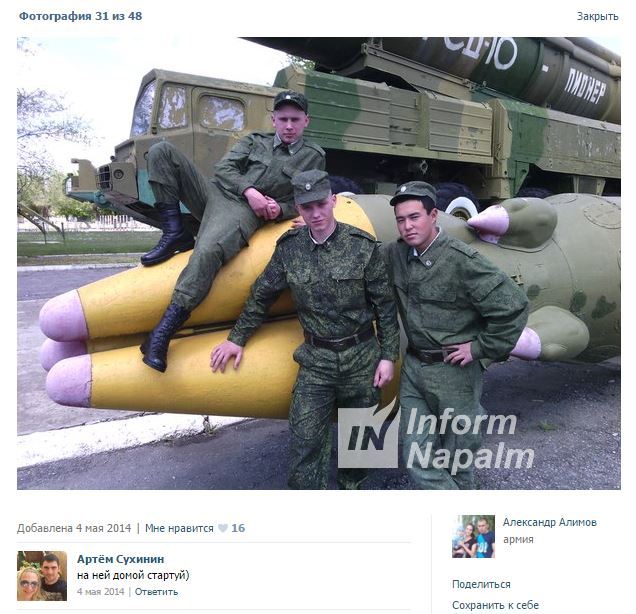 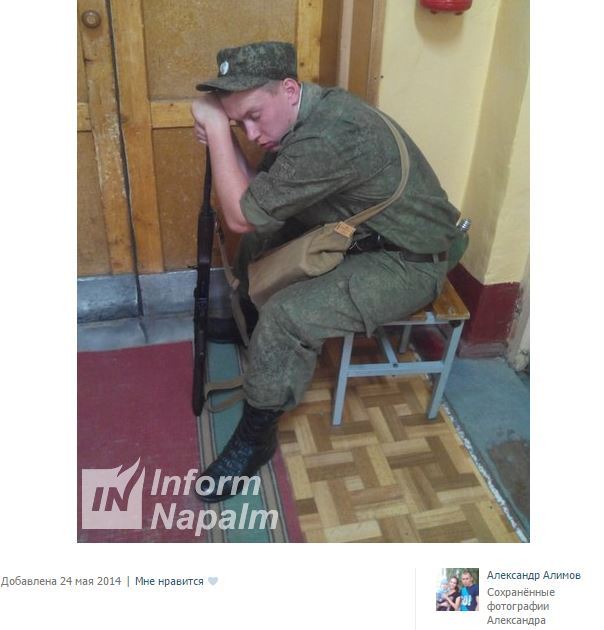 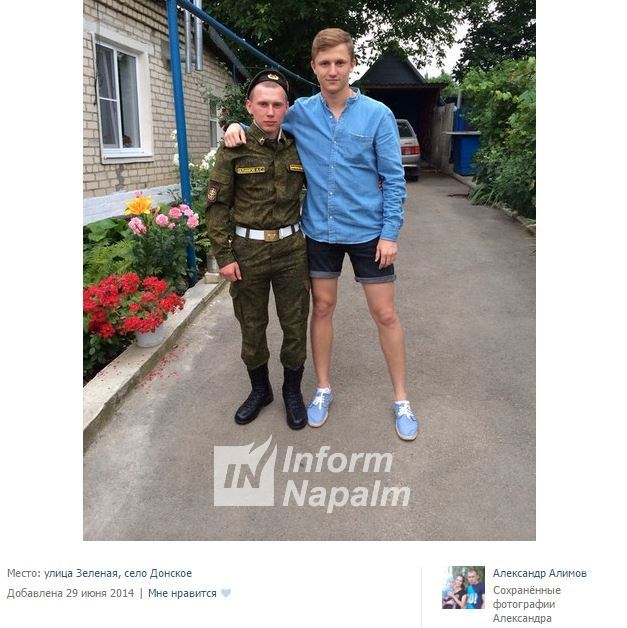 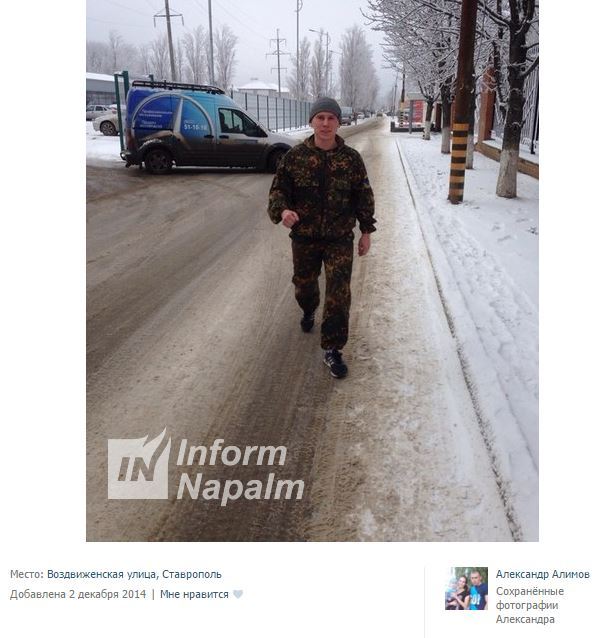 In Fall of 2015 Aleksandr Alimov got a temporary assignment to Crimea. His affiliation to the 25th regiment of GRU Special Forces was also identified and confirmed by the investigation of his contact list. 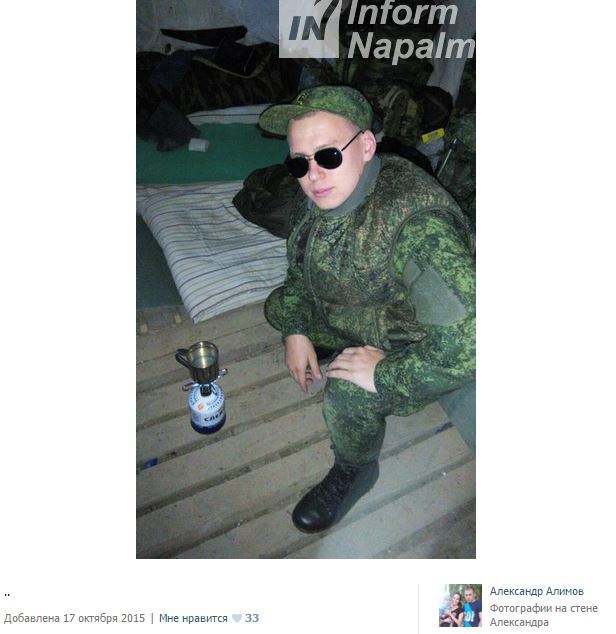 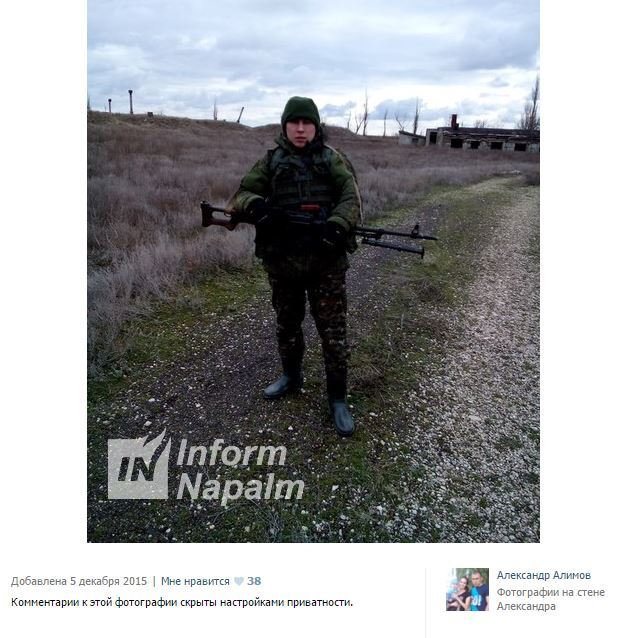 Alimov’s comrade-in-arms from Stavropol, who hides under the pseudonym Ratibor Silych (deleted), became his workmate. His friends’ list also confirms the affiliation to the 25th regiment (archives of the profile, albums, contacts). 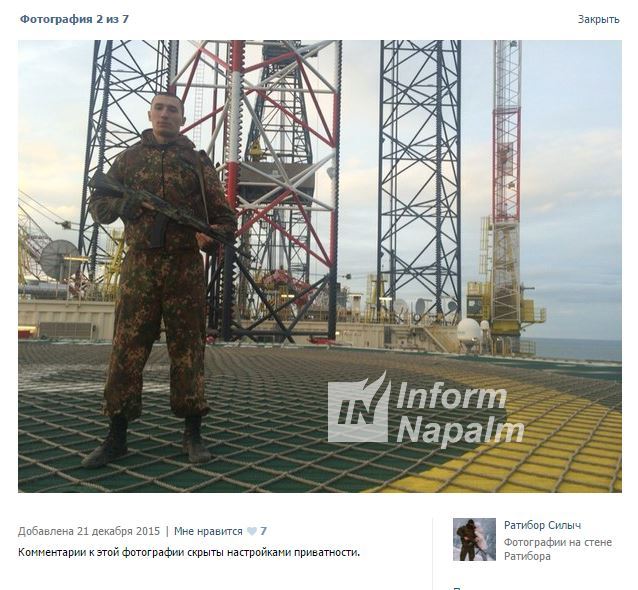 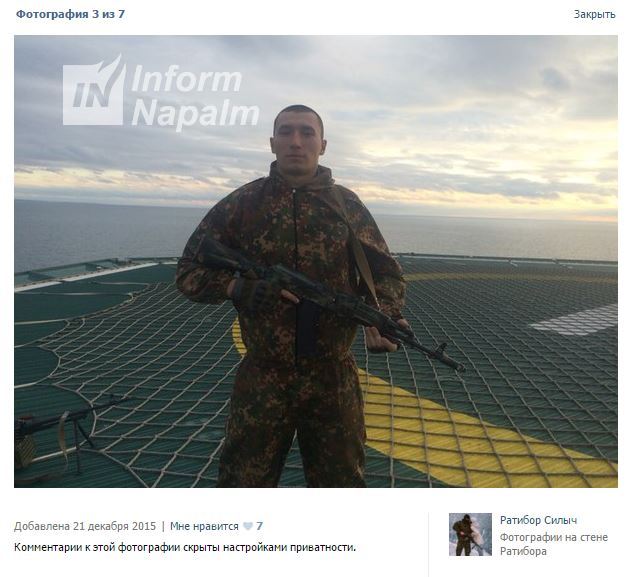 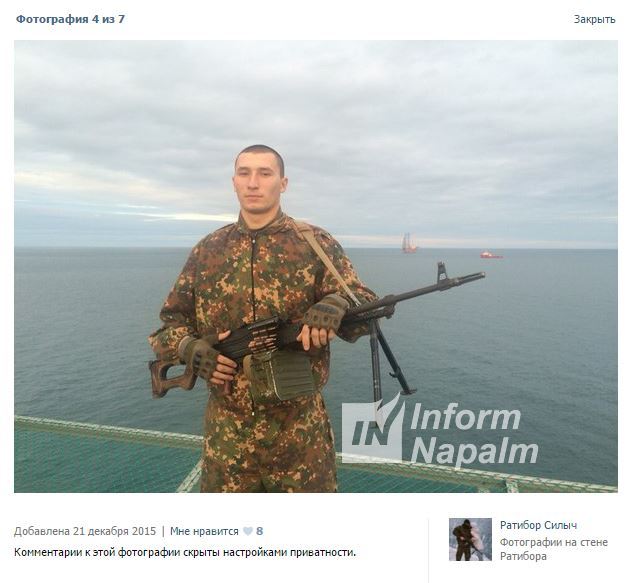 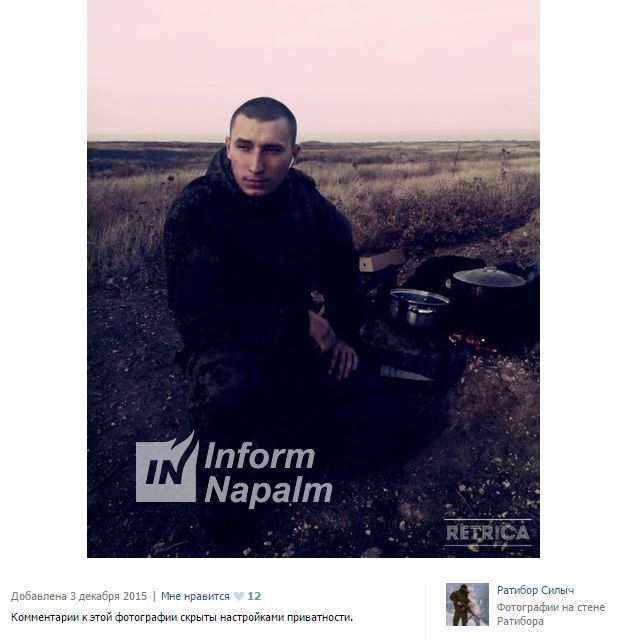 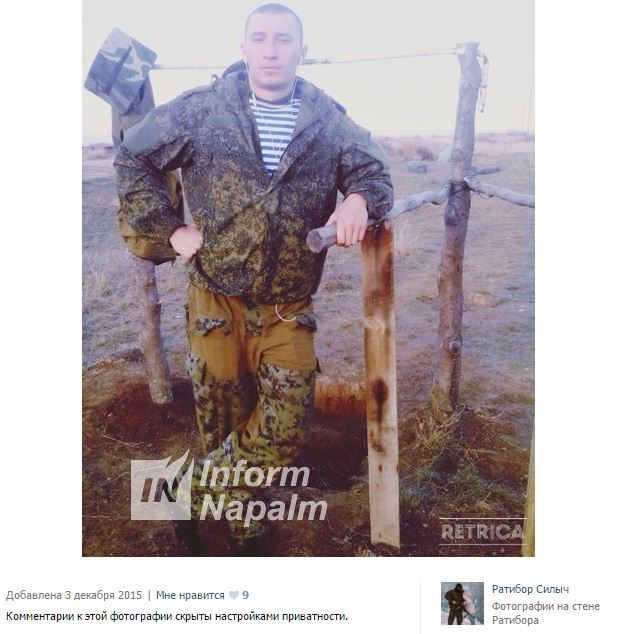 We also have found out, that a detachment from the Russian 810th marine brigade guarded the oil platforms together with GRU Special Forces. The photos on Marine Danila Morgunov‘s web page also confirm this information (deleted, archive of the profile, albums and contacts). 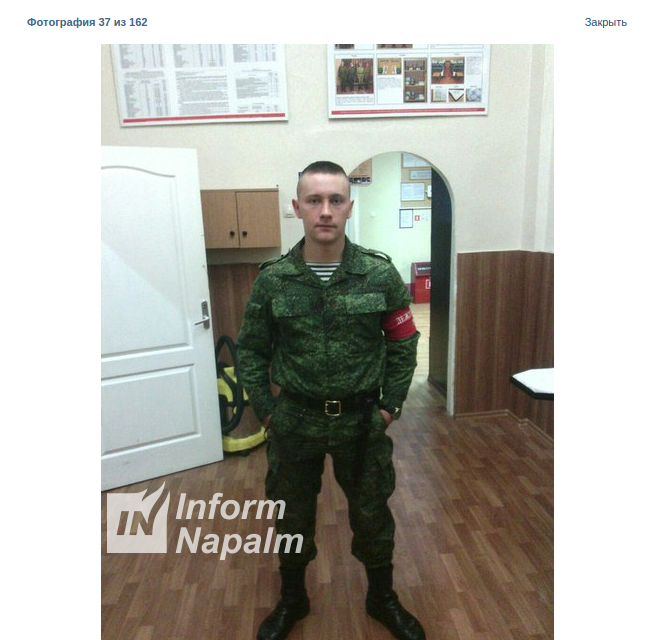 It is remarkable that the Russian Ministry of Defense allows the Marines wear non-statute uniform like ‘Multicam’ without any badges and insignia – which is very Russian and very pirates like. 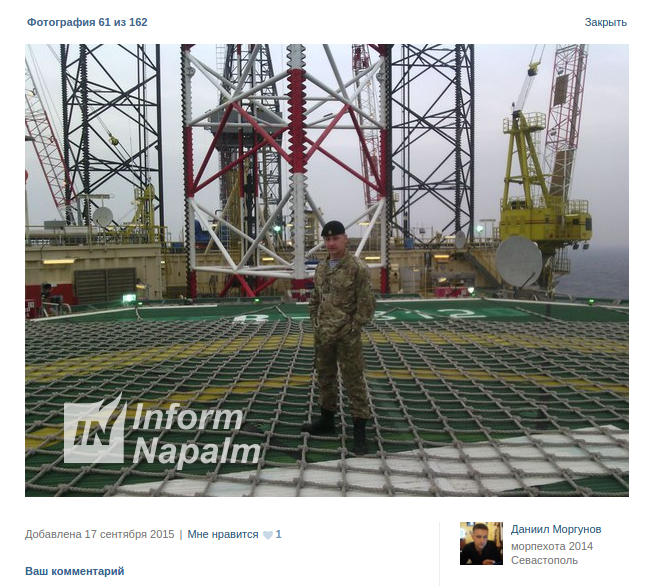 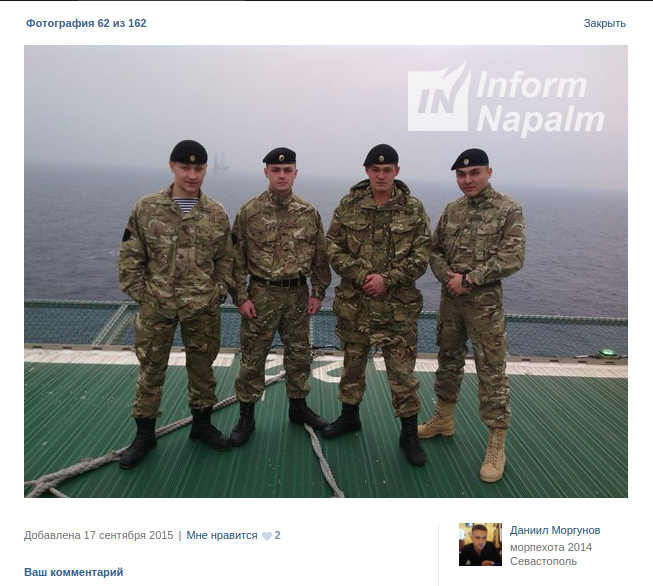 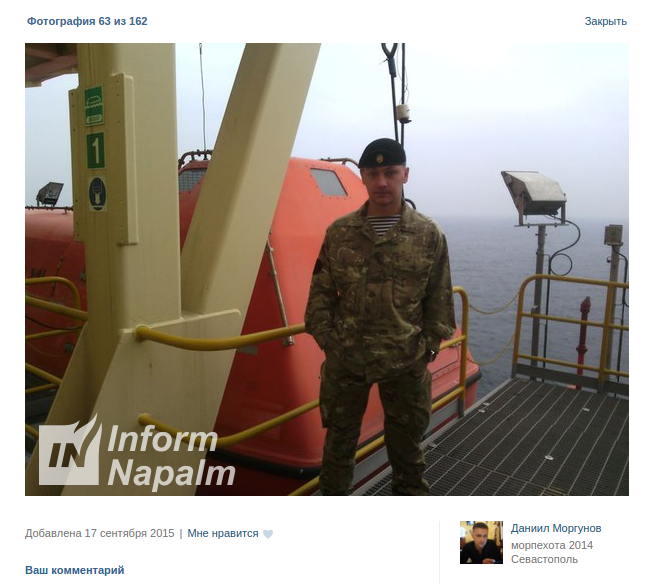 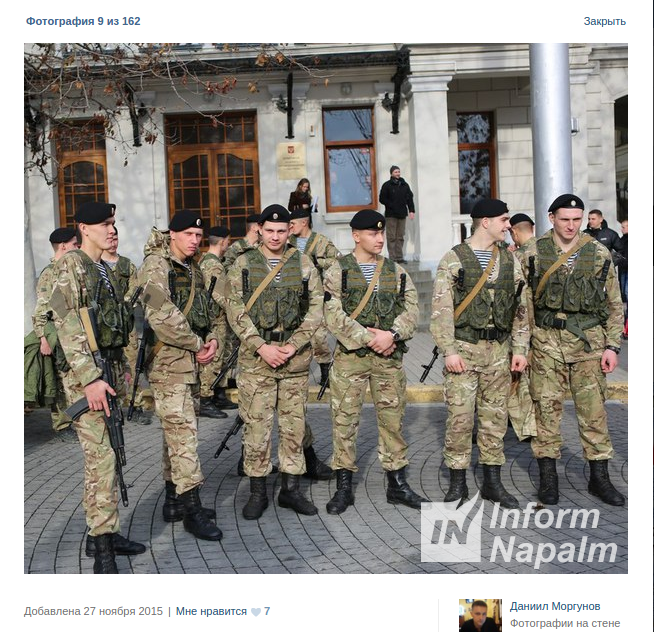 We have to admit that the Central Investigation Department of the General Prosecutor Office of Ukraine conducts prejudicial inquiry as a part of criminal case No. 12014000000000164 from April 1, 2014, based on the fact of the criminal occupation of the Ukrainian state drilling rigs. Following the request of the chief investigator, by the decision of the court from December 23, 2015, jacked-up drilling rigs ‘Petro Hodovanets’ (built in 2010) and ‘Ukraina’ (built in 2012) should be arrested.

The most interesting thing in this court decision is that nobody knows where these abovementioned drilling platforms are located; the investigative authorities just cite media reports regarding the movement of drilling platforms. Soon it will be a month since the last report of the State Border Guard Service regarding the search of JURs position, but still there is no information about exact co-ordinates.

In extracts of the court decision we can get some information about the value of these assets and amount of losses due to overrating of the contract purchasing price. Officials of the ‘Naftogaz Ukrainy’ National Oil-Stock Company on March 18, 2011 signed a contract with ‘ChernomorNaftoGaz’ Open Joint-Stock Company, granting an interest-free loan of 3,203 mln hryvnias for the purchase of the first JUR. In similar contract from November 3, 2011 and its additional agreement the second interest-free loan on sum of 3,880 mln hryvnias was granted to purchase another JUR. After the complex resale the final costs of JURs purchase became $400 344 000 and $399 800 000 correspondingly. At that moment sum of losses due to the overrating of the purchasing price was over 400 million dollars.