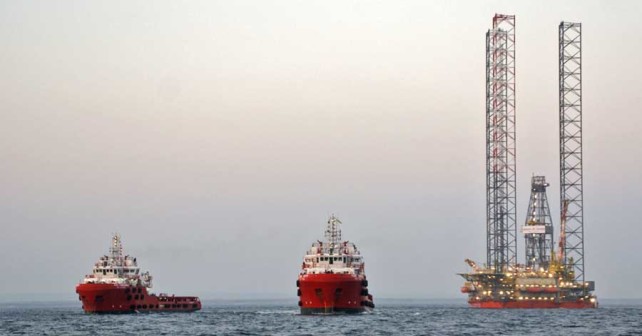 In our previous article dedicated to the “Boyko’s drilling rigs”, volunteers of the InformNapalm community described how, according to the State Border Guard Service of Ukraine from December 15, Russia moved ‘Petro Hodovanets’ and ‘Ukraina’ jack-up drilling rigs from the zone of Odessa natural gas field. Kyiv court arrested this property and referred in its decision from December 23, 2015, to the media’s statements about the rigs withdrawal. It means that at the time of the court’s decision there was no information about the exact location of these jack-up rigs.

After the publication of our material, the experts who monitored the maritime traffic near the shores of the annexed Crimean peninsula shared additional data relating to the withdrawal of the Ukrainian rigs.

Andrii Klymenko, an expert and chairman of supervisory council of the ‘Maidan of Foreign Affairs’ organization and the chief editor of ‘BlackSeaNews’ website, commented on the situation as follows: 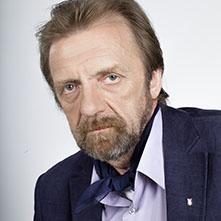 “The events took place a week before the information about the rigs relocation was announced by the State Border Guard Service – not on December 14-15 but on December 7-8, 2015. Before the “Boyko’s rigs” were moved closer to the Crimea, the Russians installed at the Odesa gas field an old ‘Tavrida’ rig, which was towed from the Olenivka village (Chernomorsk raion, North-West of Crimea) where the technological base of the stolen ‘ChernomorNefteGazis’ is located. The towing operation was done with the help of 2 latest offshore ships ‘Fedor Uriupin’ and ‘Mys Tarkhankut’. 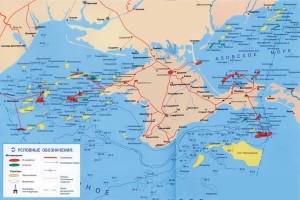 Having set up ‘Tavrida’ rig, they towed away the ‘Petro Hodovanets’ and ‘Ukraina’ drilling platforms and brought it to ‘Holitsyn’ gas field (which has almost the same structure as the explored ‘Gordievich’ deposit , located at greater depths) on December 8.

For the last month the rigs had their Automatic Identification System units switched off. But recently ‘Ukraina’ jack-up rig switched its transponder on and appeared at the supposed place – in the 12-mile zone of territorial waters of Ukraine, adjacent to the Crimean peninsula”.

Ukraine bought the ‘Fedor Uriupin’ and ‘Mys Tarkhankut’ tugboats together with the new rigs. 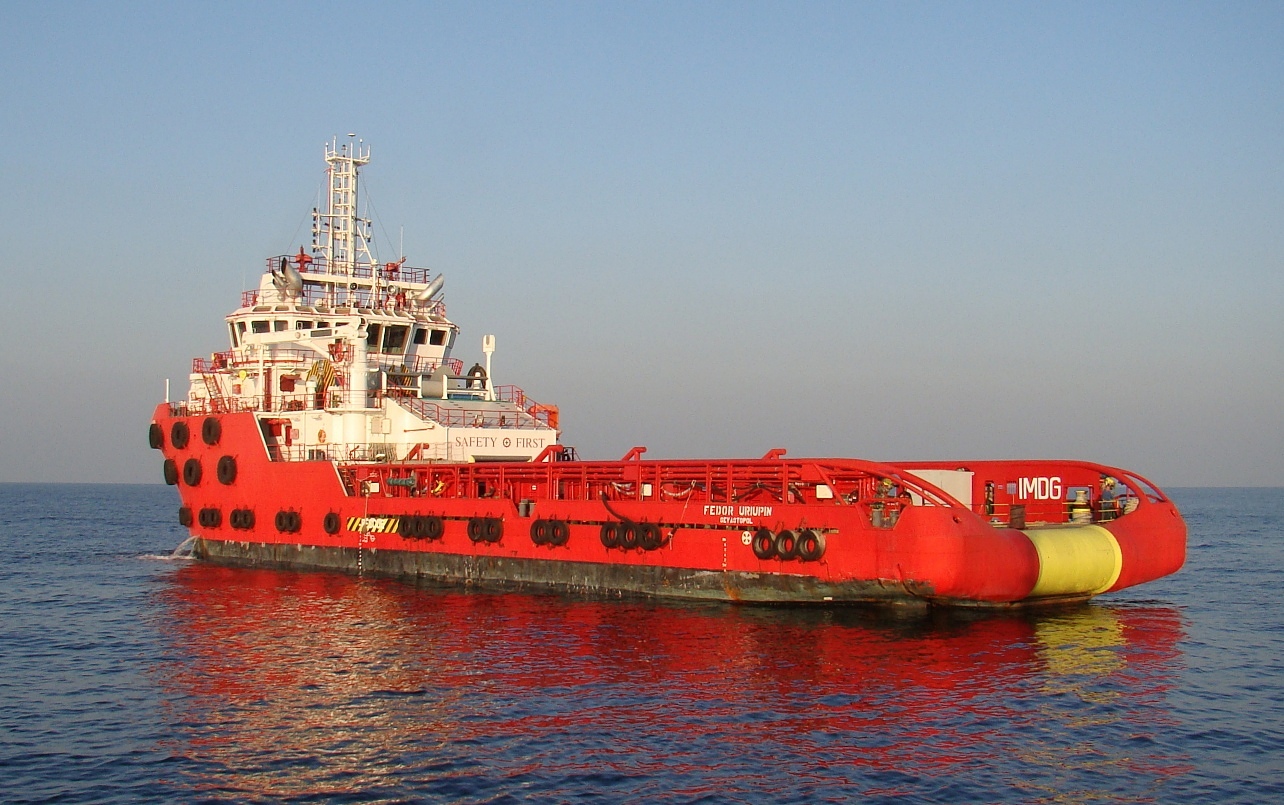 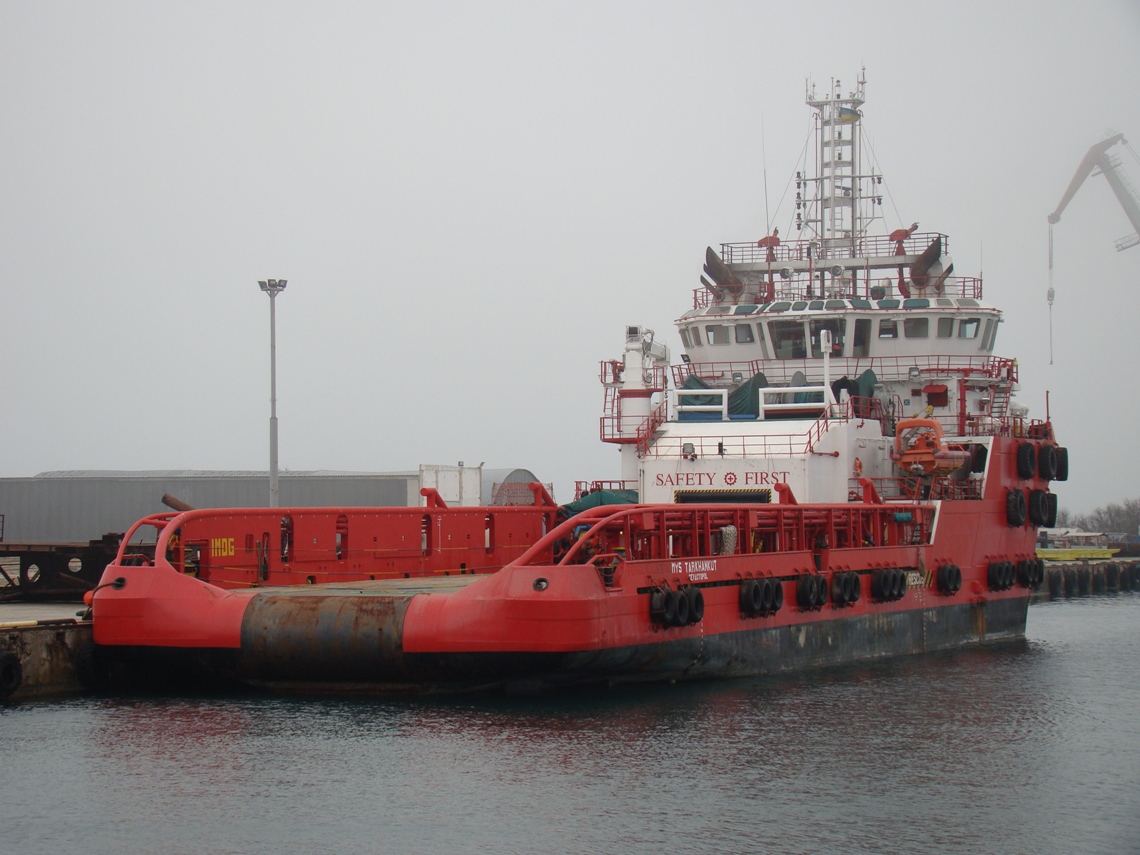 With the help of the online tracking services we can search the history of the ships’ movements in December of 2015. Thus, we can track the tugboats which relocated the rigs closer to the Crimean shore.

This way, the State Border Guard Service of Ukraine tardily reported on December 14 about the “Boyko’s rigs” withdrawal which happened on December 8. Moreover it seems they are still ‘clarifying’ their exact location (there was no other official information since that time).

In our turn, we continue to monitor the detachments on duty on these drilling platforms. The current investigation will show you the servicemen of the 126th separate coast defense brigade of the Russian Black Sea fleet.

The Russian servicemen started to publish the photos proving their participation in guarding of the rigs back in the summer of 2015. Let’s take a closer look.

Maksim Titov (archive of profile, album, contacts) from Simferopol, betrayed the oath to Ukraine. He served in 2003-2005 but now wears badges of the Russian coastal defense. 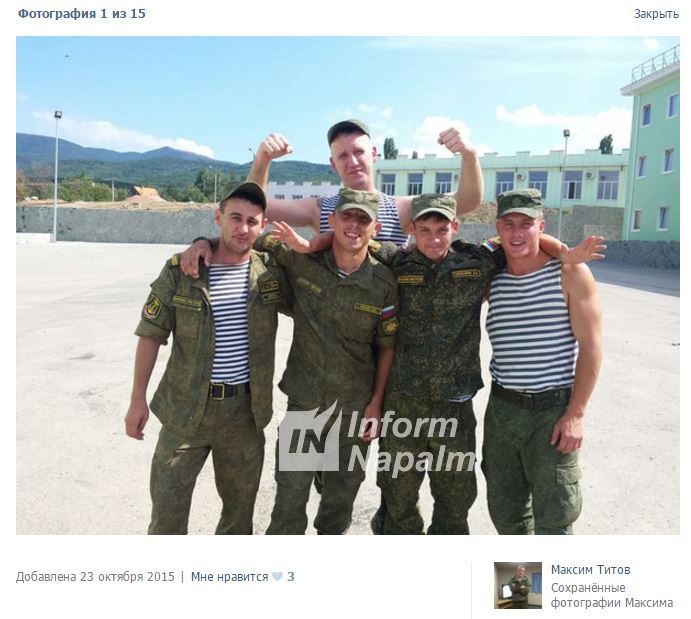 Maksim took a picture of himself on ‘Ukraina’ platform and wrote in the comments under the photo that as of May 25, 2015, the rig is 190 km from the Crimea. 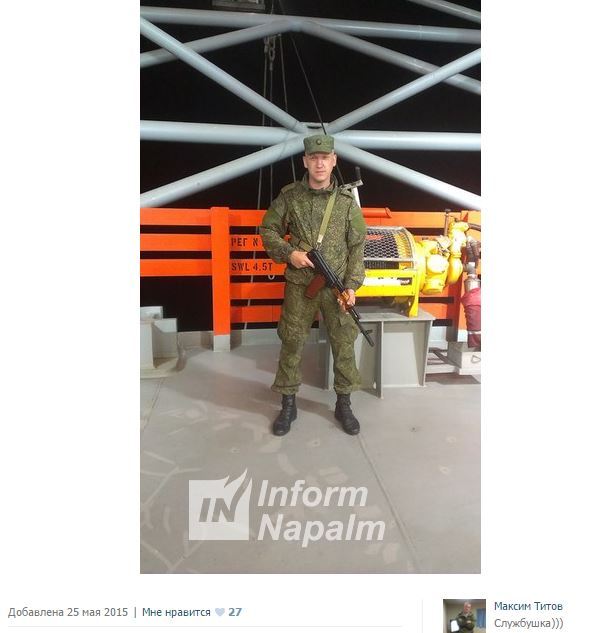 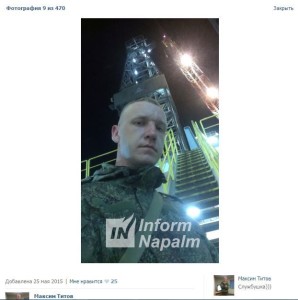 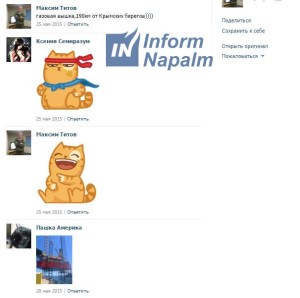 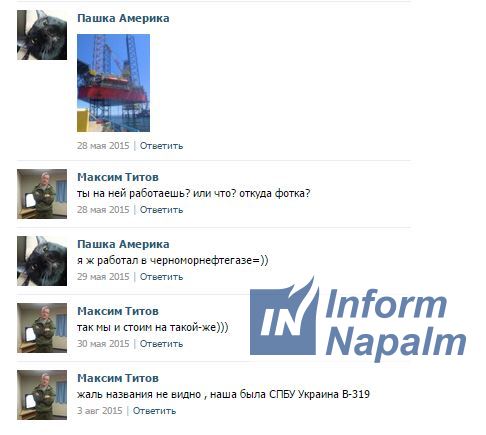 Ruben Sogomonian (archive of profile, album, contacts) is Titov’s brother-in-arms and comes from Rostov-on-Don. He is present in group photos and also in front of the drilling platform. 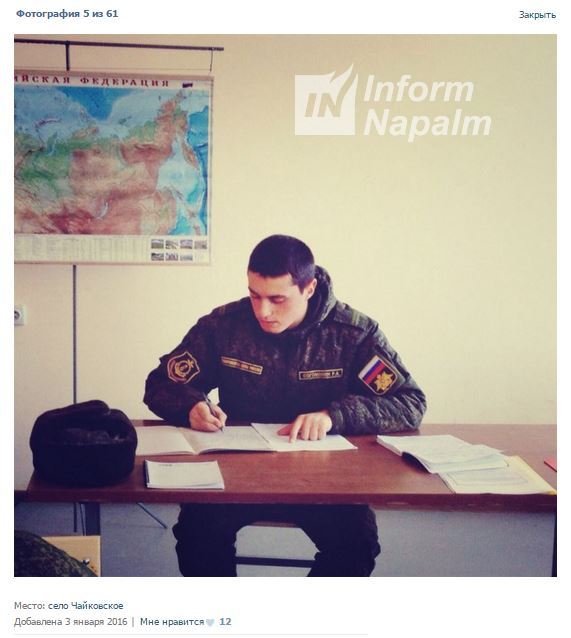 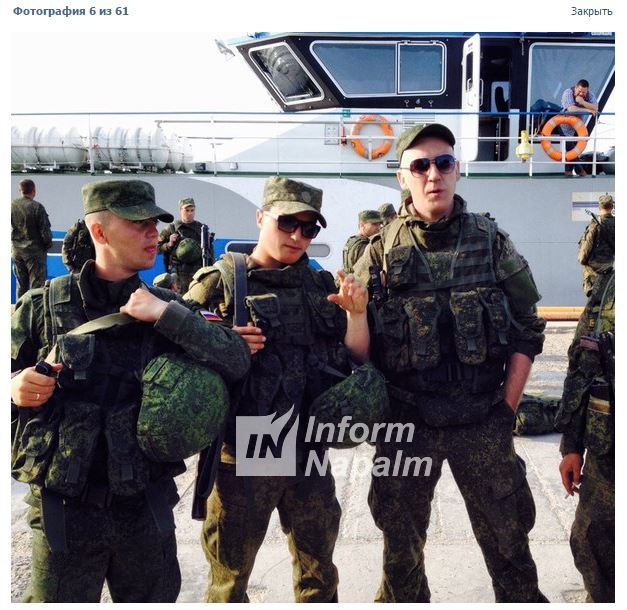 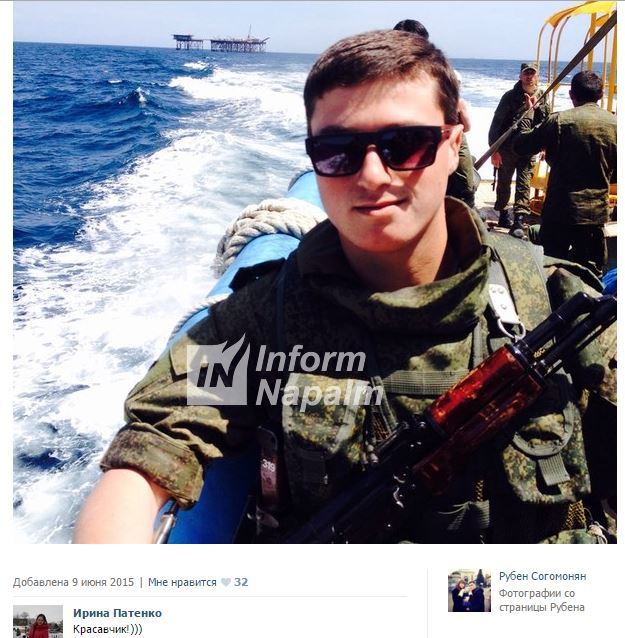 Vladimir Gildebrandt (archive of profile, album, contacts) from Barnaul is a former serviceman of the 35th motorized rifle brigade (military unit No. 41659, Aleisk, Altai krai, Russia). He signed a contract with the Crimean coastal defense in 2015. 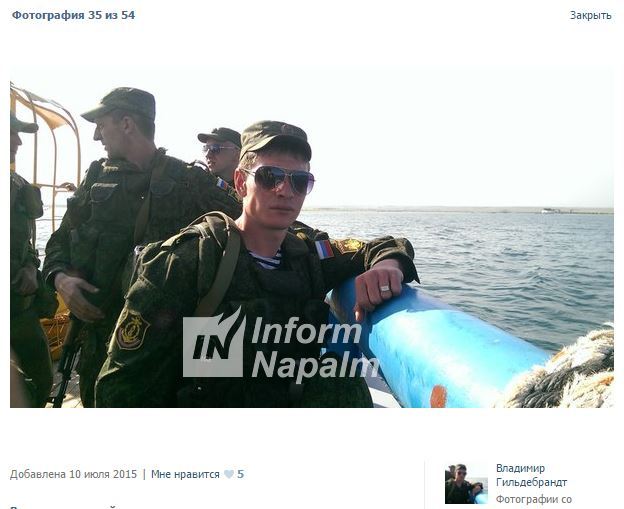 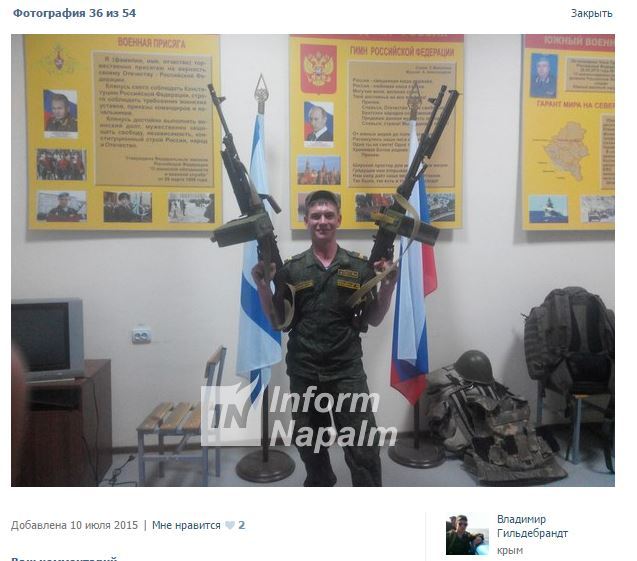 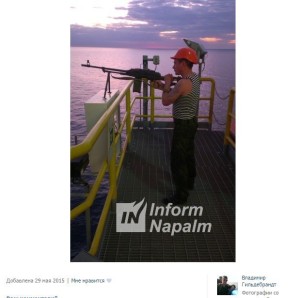 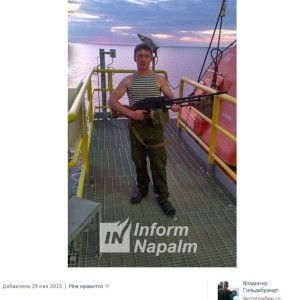 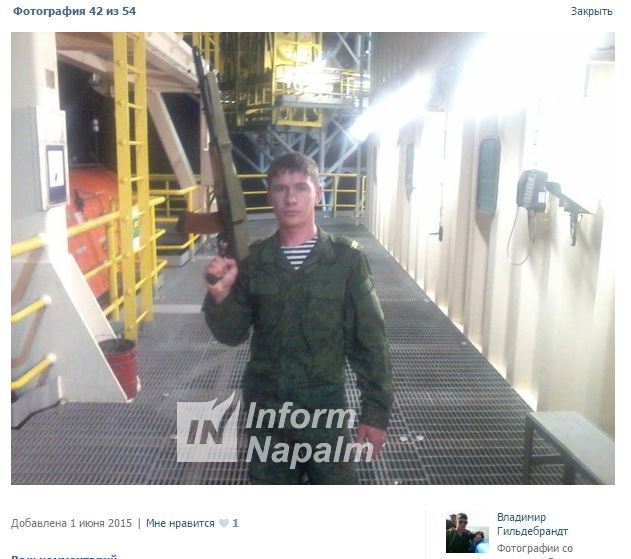 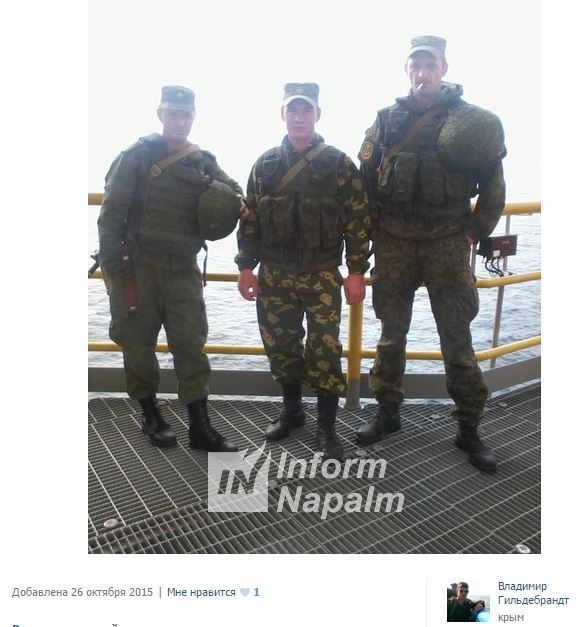 One of the photos shows the rugboat. 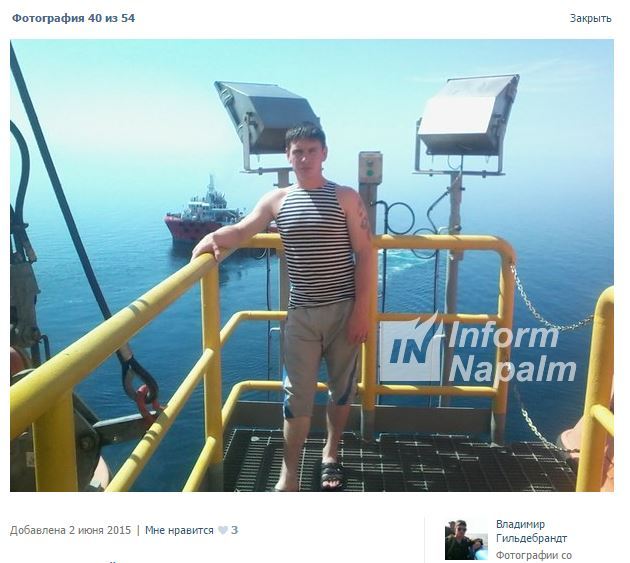 The pictures were uploaded monthly. The servicemen keep the watch and periodically relieve each other (this is also mentioned in the comments under the photos). 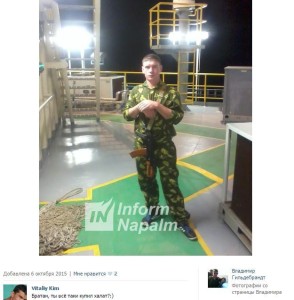 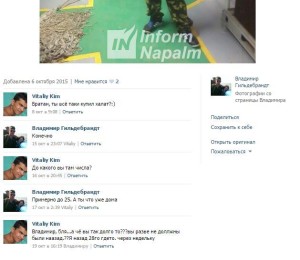 Vitaly Kim from Krasnoperekopsk is the main Gilderbrandt’s workmate and commentator. The serviceman specified military unit No. 12676 on his social profile page. 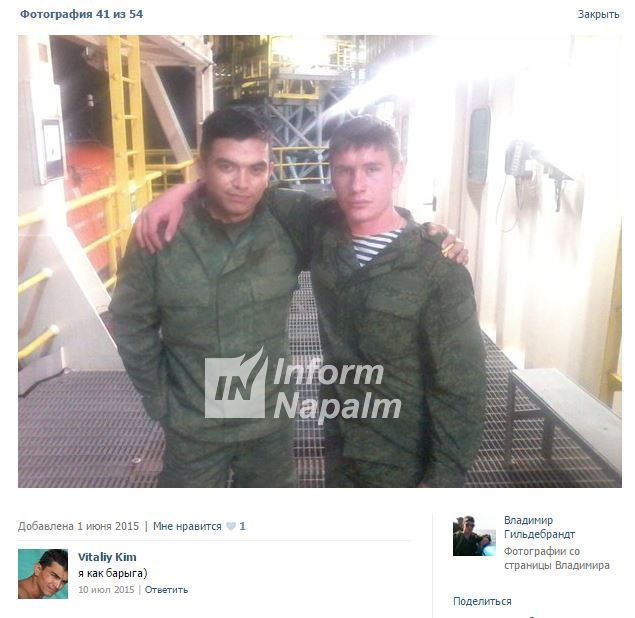 Aleksei Grinevich (archive of profile, album, contacts) uploaded a picture of himself with the coastal defense brigade’s insignia. The picture was taken on the oil platform in December of 2015. 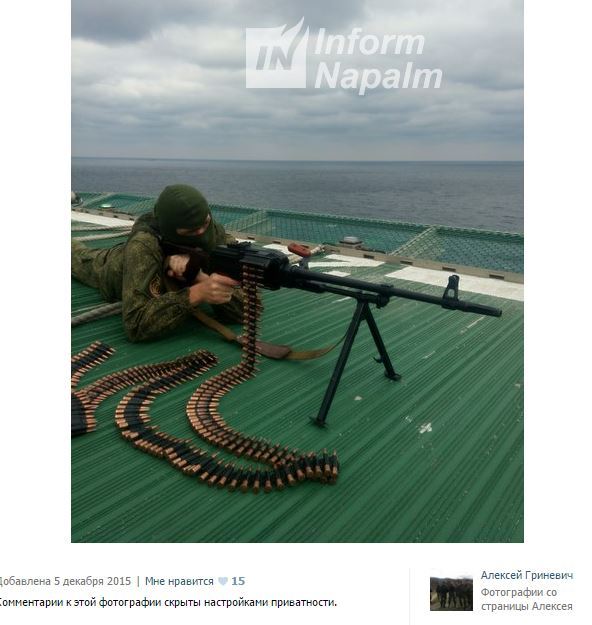 Please note that the ‘Fedor Uriupin’ and ‘Mys Tarkhankut’ tugboats are also listed in the criminal case (No. 42014220000000635 from November 12, 2014) against the former management of ‘NaftoGaz’ company for the theft of 50 million dollars spent on their purchase. Tugs were acquired using the budget funds, the cost was 120 million dollars. On October 21, 2015, the court issued a permit for the investigation team to temporary access the original documents of ‘Naftogaz Ukraine’.