Russian Information Expansion in the Netherlands: Myths And Fakes About Ukraine 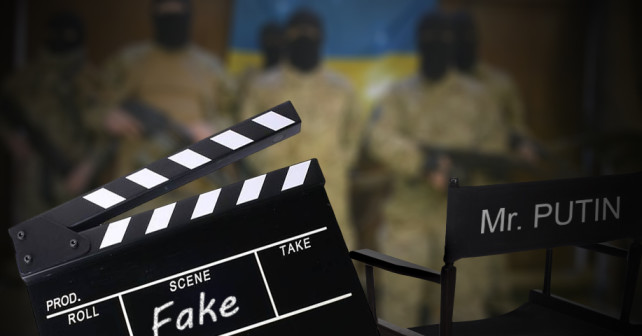 Oleksii Minakov, a blogger and digital-specialist, in his own article on the ‘Novoe Vremia’ publication listed five myths about Ukraine, imposed by Russia in the information field of the Netherlands. Just a few hours after the Oleksii’s publication the Russian side made another one attempt in order to discredit Ukraine in the eyes of the international community hastily creating low quality fake video in which actors playing ‘soldiers of Azov regiment’ announced the plans to carry out terrorist acts in the Netherlands.

Uniform discrepancy, twisted dialect of actors who tried to read the Ukrainian language text and clumsy people behavior who mostly looked rather like Russian ‘teletubbies’ than soldiers of a special services regiment already made blogosphere laugh, but the fact of such insolent discredit attempt underscores the desire of the Russian Federation to conduct information war against Ukraine in the Netherlands.

Five myths about Ukraine. We lose information war in the Netherlands

The Dutch do not know a lot about Ukraine. When they start wondering they see and hear only the myths.

Russia and pro-Russian forces carry out super-power information attack for some reason. This month, there was a news story at Russian ’Pervyi kanal’ [The First Channel] that the prospects of Ukrainian residents flow after Agreement ratification is frightening the Dutch. Literally, during the last week ‘Rossiya 24’ TV channel proclaimed that three quarters of the Dutch are against the association with Ukraine. In addition, news story showed some activists who handed out newssheets with photo of burnt House of Trade Unions in Odesa and “Nazi ‘Azov’ battalion with Nazi symbolic” at the center of Amsterdam. Moreover, correspondent found one Dutch person who said aggressively: “I am against Ukraine – they shot down 200 our citizens in July, 2014”. The Russian propaganda channels collected all these myths about Ukraine and actively promote them in the Netherlands. In order to receive good result after the referendum it is necessary to ‘neutralize’ all these lies pointed towards the negative perception of Ukraine in the eyes of the Netherlanders.

It is not a secret that record influx of refugees – is a problem number one for Europe. In this context the Netherlands are ‘famous’ for a major campaign against building of a refugee center. Therefore, it is not surprising that the Dutch afraid of illegal immigrants from Ukraine, but visa free regime with Ukraine has nothing to do with the association Agreement and will be introduced regardless of the referendum results. The customs control with verification of documents will remain on the Ukrainian border, hence there will be no influx of refugees from Donbas where hostilities have place.

In October of last year the Netherlands published investigation report about reasons of ‘Boeing’ catastrophe, which said that the airliner was shot down by ‘Buk’ air defense system missile. There are no such Russian weapon in service of the Ukrainian army for several years already. There is no doubt that pro-Russian terrorists downed this passenger plane because they thought that this was Ukrainian An-26 transport plane. Terrorists even had time to brag it in social networks that they downed the airplane and the Russian ‘Life News’ TV channel showed news story that the Ukrainian An-26 plane had been downed by ‘militants’ ostensibly. It is important to understand that Security Council of the Netherlands will publish final report about plane crash in February and Russia will continue to lobby this absurd theme about culpability of Ukraine in this catastrophe.

Myth 3. Nationalistic radicals, in other words neo–Nazis, are in authority in Ukraine

According to the results of last elections, Right Radical Parties did not get into the parliament hence are not represented in the government. For example, ultra-right party ‘Svoboda’ which is known by its torchlight procession failed to meet the 5% threshold during the parliament election in 2014, and Oleh Tyahnybok, the leader of ‘Svoboda’, got only near 1% of votes on presidential election. ‘Pravyi sektor’ [Right sector], another radical party and favorite Kremlin’s bogeyman, also did not overcome the required vote’s threshold.

Myth 4. Ukrainians extorted money for the paintings stolen over 10 years ago from the Museum of Western Friesland.

Last month, the ‘De Telegraaf’ newspaper, which participated in the campaign to collect signatures for a referendum, thrown an information bomb, aimed at discrediting Ukraine. The director of the museum said in the interview that the stolen paintings are in the hands of the Ukrainian armed forces, although the presence of these paintings in the territory of Ukraine is based on hearsay and not justified by objective evidence. Despite this, the video with the director of the museum on the newspaper’s Youtube channel has a clearly expressed populist name ‘Ukraine: Return the stolen art!’. Later, at a press conference, a representative of the museum referred to some ‘well informed sources’ which raises doubts about the accuracy of the allegations.

Myth 5. The taxes paid by the Netherlands’ citizens will be spent on the Ukrainian reforms.

The media periodically talk about the incredible figure of 160 billion euros which, allegedly, will be received by Ukraine right after the signing of the agreement, nevertheless the EU officials denied this information two years ago. Conversely, the Netherlands will benefit financially from the Agreement due to the increase in export to Ukraine of products on which duties will be abolished.

The Dutch do not know much about Ukraine, but if they try to find some information they get these fakes. And the closer the referendum is the more pressure will be generated by treacherous agitators. Therefore, it is possible that new myths will emerge in the nearest future. The Ukrainian community in the Netherlands tries to counteract this, in particular the oekraine-referendum.nl website was created last year. However, to influence the public opinion of the local residents there is a need in high-quality content which will be spread by the local media: infographics about benefits of ratification of the Agreement or viral videos. Also some PR-action on the eve of the referendum won’t hurt, for example, a flash mob with the Ukrainian flag in the central square of Amsterdam. But now, in less than three months before a crucial referendum, Ukraine, unfortunately, is losing the information war.

Journalist Viktor Tregubov shared his opinion in his blog on the fake video about terrorist attacks in the Netherlands:

“A provocative video appeared on Youtube a couple of hours ago. In this footage men in masks, pretending to be soldiers of the ‘Azov’ regiment, threatened the Dutch with terrorist attacks if the Government of the Netherlands fails to sign the association agreement between Ukraine and EU. This was a dirty provocation aimed at discreditation of Ukraine in the eyes of the Europeans in general and the Dutch in particular. Moreover, the provocation was badly prepared – it can be seen in many details: mismatch between the ‘fighter’s uniform and the actual outfit of ‘Azov’ soldiers, uncertainty of the ‘speaker’ where to put the emphasis in the word ‘Ukrainian’, and so on. Obviously, the video was designed for a viewer which does not know all the ins and outs of the conflict in the Eastern Ukraine. However, as far as I can understand the strategy of such ‘stovepiping’, it will be actively spread through pre-defined accounts in social networks. Maybe several corrupted media will join the process of legitimization of this video”.

We hope that the international community will help to neutralize Russia’s information attacks against Ukraine on the eve of the referendum in the Netherlands, because it will affect not only the fate of Ukraine, but also the ability of the Europeans to resist the arrogant and deceitful policy of Moscow, which does its best to prevent Ukraine from leaving the sphere of its own influence.

No Responses to “Russian Information Expansion in the Netherlands: Myths And Fakes About Ukraine”