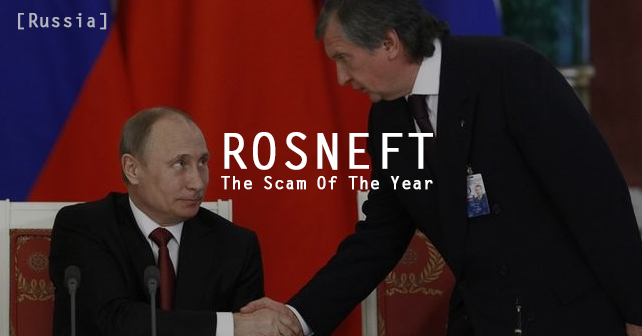 To reduce the huge, almost 2 trillion ruble budget deficit, the Russian authorities decided to sell a 19.5% stake in the government-owned Rosneft. It seemed to be a simple task: announce a public tender, establish its conditions, let buyers bid, and the tender committee will determine the winner.

But this is Russia, where business is done differently. There was no information about buyers until the last moment, and the actual sale was accomplished in a very complicated way, with more than 50 documents signed in more than 5 jurisdictions and hidden from public access.

Moreover, the largest oil deal in the world is wrapped in secrecy. Starting with the Russian Economy Minister Alexei Ulyukayev’s arrest for an alleged bribe in the Rosneft office in November 2016, a month before the deal’s closing, and up to the death of Oleg Erovinkin, who headed the Rosneft department responsible for secret document workflow, in December 2016.

Glencore worked with USSR as far back as 1979, supplying grain in contravention of sanctions. Apparently, history repeats itself. Given the current sanctions against Russia, the Swiss-based trader got the opportunity to become the world largest trader of Russian oil. According to the deal conditions, Glencore has received a five-year contract to supply Russian oil with trader portfolio increase by 220,000 barrels / day.

Qatar is a country fighting a war in Syria against Putin for the European gas market. It is Qatar that provides Syrian opposition with weaponry and funds to overthrow the regime of Assad, who opposes the pipeline construction from Qatar through Syria to Europe. Thus the participation of a Qatar-based investor in the deal is surprising because of the obvious political feud between the two countries.

The ultimate beneficiary of the share package is QHG Shares Pte. Ltd., the joint company of Glencore and the Qatar Investment Authority. 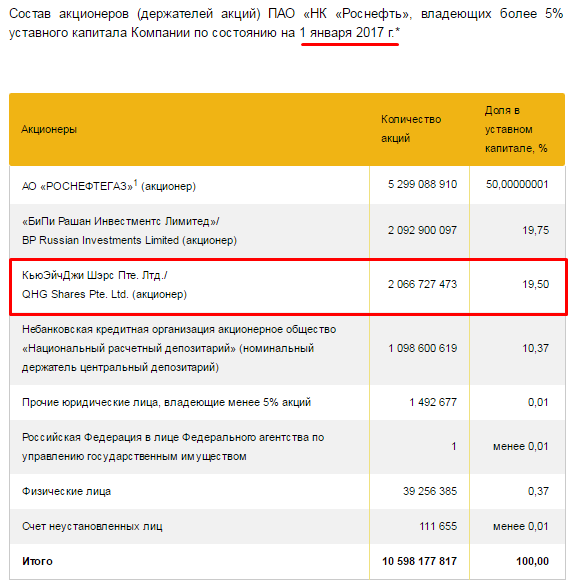 The list of Rosneft shareholders with more than 5% of shares as of January, 1, 2017.

This joint company is registered in Singapore. Basically, this is an offshore company. This allows it to pay only 5% tax on dividends. Otherwise, it could be taxed as a foreign company holding Russian shares at the rate of 15%. 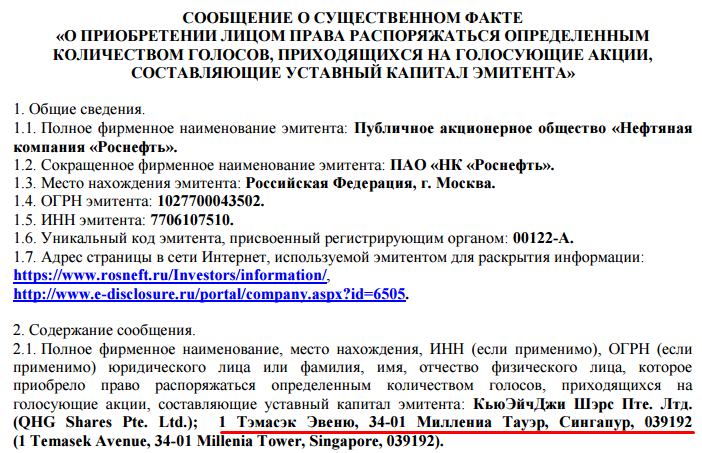 about the acquisition of 19.5% stake by QHG Shares Pte. Ltd.

There are four shell companies between the joint company and the ultimate beneficiaries: QHG Investment LLP and QHG Holding are registered in the Great Britain, Qatar Holding – in Qatar, QHG Cayman – in Cayman Islands.

What is the actual deal value – who to trust? Glencore, one of the two Rosneft stake buyers, published a press release on December, 7, 2016 about the agreement to purchase 19.5% Rosneft shares for 10.2 billion euros. 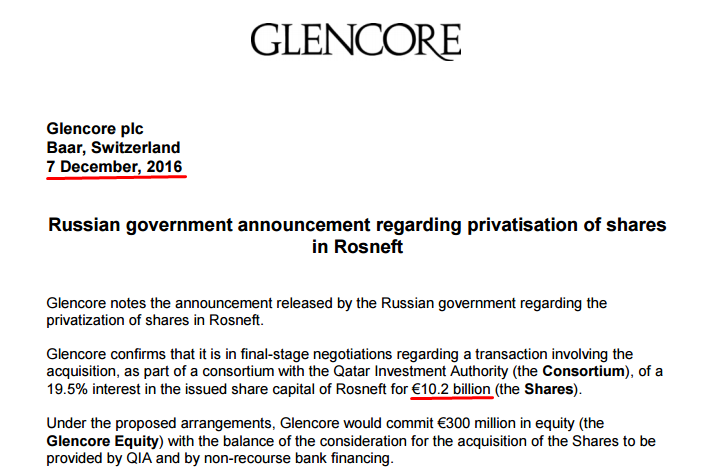 On the same day, December, 7, Putin held a meeting with Sechin, where the Russian president announced a somewhat different amount – 10.5 billion euros. This sum exceeds the amount announced by the stake buyer by 300 million euros.

One would think that the Russian president simply misspoke. However, Igor Sechin mentioned the same amount in that meeting: 10.5 billion euros. 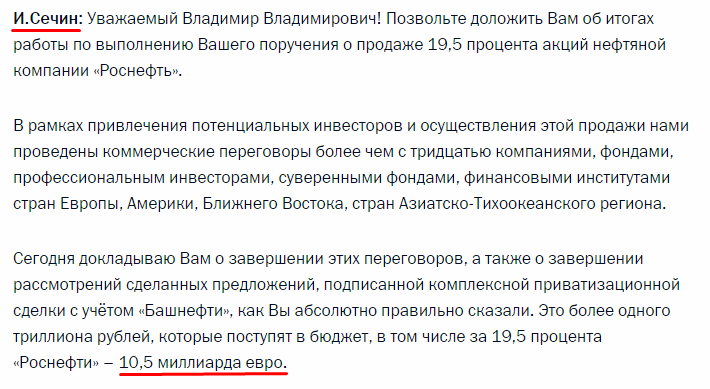 Moreover, on the same day the president’s press secretary Dmitry Peskov announced to journalists that 10.5 billion euros would go into the budget.

Because of the discrepancy in the figures, even the press releases on the Rosneft official website were manipulated. Each publication has its release date, except one. It was actually released on December, 10, but in the publication text someone retroactively specified December, 7, the deal date. 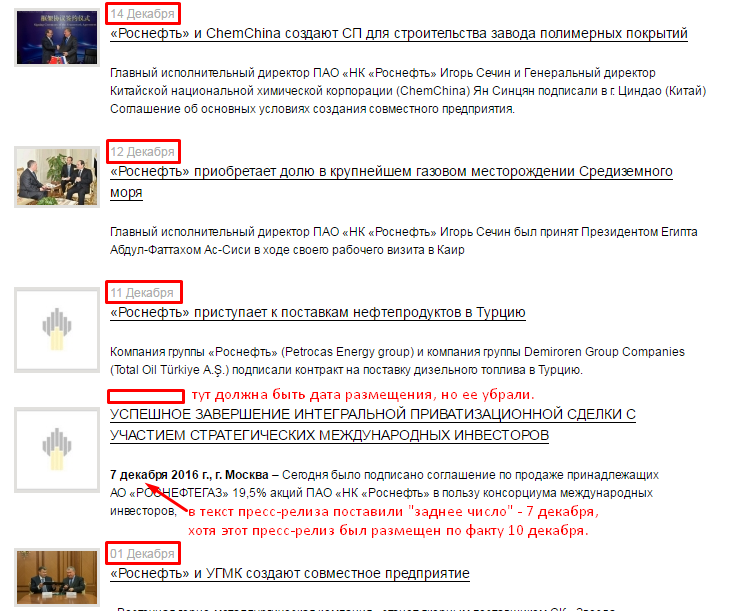 You can see the release date missing in the newsfeed, but in the text of the release you can find the date December, 7.

The press release was edited too. However, some readers made screenshots of the initial version of the page. The edited version lost the initial mention about the sources of the 10.5-billion-euro budget income, specifically: the 10.2-billion-euro value of the stake deal and the remaining 300 million euros to be paid out of the dividends of Rosneftegaz, a Rosneft shareholder.

The page www.rosneft.ru/press/releases/item/185047 screenshots, made in different moments

As a result of Rosneft 19.5% stake privatization the Russian budget will receive 710.8 billion rubles (11.1 bilion dollars or 10.5 billion euros. It includes proceeds in the amount of 692 billion rubles (10.2 billion euros) from the stake sale to the buyer consortium based on Rosneft shares closing price (352.62 rubles / share) as of December, 6, 2016 with 5% discount. The total amount received also includes 18 billion rubles (0.3 billion euros) funded with additional dividends from Rosneftegaz, being made according to the updated dividends policy, approved by the Rosneft board of directors as a part of preparation for the stake sale.

The reference to additional proceeds funded with dividends (in bold) disappeared in the edited version of the press release.

And this finally answers the question about the true amount of the deal. And the reason of all these manipulations with figures is that the sale of the 19.5% share of Rosneft was a government directive from November, 7, 2016, which specified the minimum sale price: 748.26*0.95=710.847 billion rubles. That is the equivalent of 10.5 billion euros. 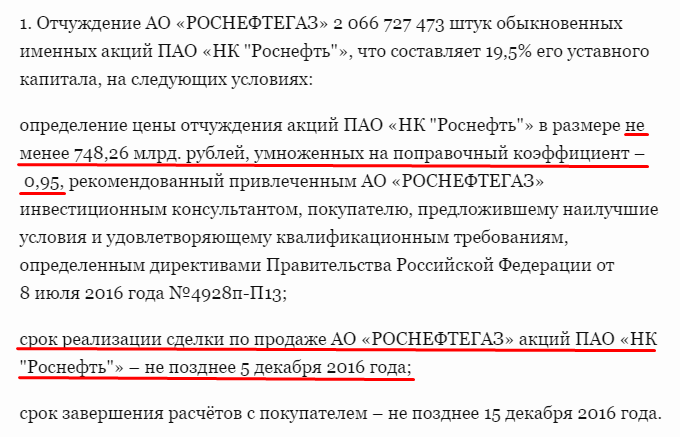 To define the selling price of the Rosneft shares at the level not less than 748.26 billion rubles, multiplied by the 0.95 ratio, as recommended by Rosneft external investment consultant, to be offered to the buyer that submits the best offer and meets the requirements of the Russian Government directive No. 4928п-П13 of July, 8, 2016.

The closing date of the sale of the Rosneft shares by Rosneftegaz will be no later than December, 5, 2016.

All settlements with the buyer have to be completed no later than December, 15, 2016

The government directed to close the sale by December, 5, 2016. In reality it happened on December, 07, that is, the deadline was missed by two days. The government directive is not law, but Sechin wanted to comply with “order from above”, if not by terms, then at least by the amount. However, they did not clear the amount threshold either and ended up 300 million euros short of the planned 10.5 billion euros. This is why they had to invent the extra payment to the budget out of the dividends of Rosneftegaz and then tried to hide it from the public.

Here is the timeline of Putin’s and Sechin’s lies about the budget revenues of the Rosneft stake sale.

December, 16: The Rosneft Chief Operating Officer Igor Sechin reports to Vladimir Putin that all revenues from the Rosneft 19.5% share sale have been transferred to the federal budget. The Russian Ministry of Finance confirms the 710.8-billion-ruble transfer.

December, 19: three days later Reuters publishes the report that Intesa Sanpaolo bank, the main creditor of the foreign Rosneft stake buyers, have not made any payments and is still considering its participation in the project. The funds from the Italian bank were transferred only later in January.

This means that by December, 16, no transfers into government accounts had been made from the sale. Sechin and Putin deceived the country and the whole world.

And even on December, 23, four days after the statement by the Italian bank, Putin at his large press-conference kept lying to his nation about budget revenues from the privatization of Rosneft shares.

“Regarding the funds, particularly whether foreigners transfer money for the 19.5% stake of Rosneft. The full amount has already been transferred to the Russian budget.” Vladimir Putin, December, 23, 2016.

But, If the Italian bank – the main creditor of the deal – had not transferred funds for the purchase, what was the source of Russian budget revenues? And Putin himself gave the hint at that press-conference:

“Yes, there is a reserve, Rosneftegaz funds… These funds are under government control. And we use it for financing, when the government loses sight of its priorities that require attention… So, for such things, which, after all discussions and fights, the government can’t find funds for, but which still need to be financed. we will spend money from Rosneftegaz.”

Which means that the payments to the budget were made with funding from the free cash of Rosneftegaz. And it had some cash available – just go back to December, 05, 2016. On that day Rosneft announced the approval of the terms of a 10-year bond issue in the amount of 600 billion rubles (which is close to the 19.5% stake deal amount), and collected bids in just half an hour. And though a Rosneft press secretary claimed that the proceeds would be directed to foreign deals and debt refinancing, those were just words.

It bears repeating that Putin, Sechin and other authorities lied in public – there were no proceeds of Rosneft stake sale to the budget in December. Putin was in a rush and simply could not wait for the full money transfer from Rosneft stake buyers in 2017 since the State Duma passed the 2017 budget taking into account the revenues of the Rosneft 19.5% stake sale in 2016.

The absence of revenues of shares sale in December, 2016 could be easily tracked in the company financial reports. And then someone could rub Putin’s or Sechin’s face in that. But these guys aren’t fools and foresaw it. To hide their manipulations, in December 2016 the Russian Government adopted the decision not to publish financial reports of Rosneftegaz, the Rosneft shareholder. This way the finances and cash flows of the largest petroleum company in the world became a black box. Which means that the privatization of Rosneft shares is just the first in a series of great scams involving this company.

This publication was prepared by political observer Alexey Minakov.

(CC BY 4.0) The information was prepared specifically for the InformNapalm.org website, when you reprint and use the material, an active link is required