An Open Letter to YouTube: A Terrorist of the Russian Federal Penitentiary Service Filed a Complaint for ‘Breach of Confidentiality’ 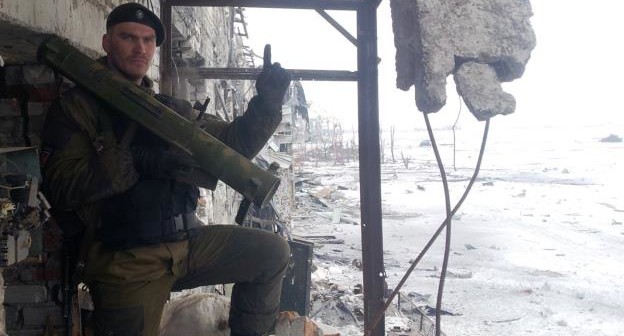 Today, on March 4, 2016, the official YouTube channel of InformNapalm community received a letter with an ultimatum from the YouTube administration with a reference to the claim for the breach of confidentiality and a demand to edit or remove the video showing the employee of the Russian Federal Penitentiary Service involved in military operations in Donbas (Ukraine). 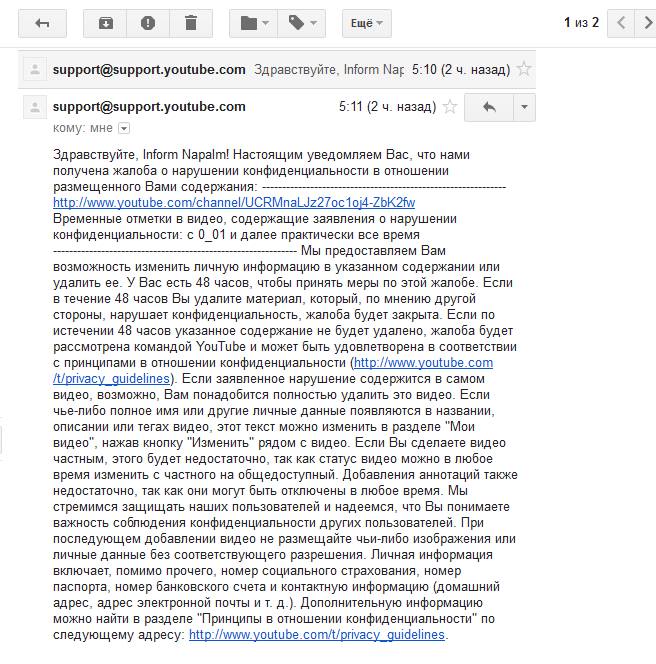 According to the complain, the video has to either be edited so that the subject cannot be recognized, or removed within 48 hours.

InformNapalm has held a series of consultations, based on which we prepared a counter open letter to YouTube administration. We make the text of the letter publicly available.

Dear YouTube administration, we believe that the complaint about the breach of confidentiality of the subject is controversial, and we ask you to take into account the facts listed below:

The subject caught on video is an employee of the Federal Penitentiary Service of the Russian Federation, who he is on a duty tour in the execution of an illegal order. The data recorded on the video are photo and video recordings of the law violations, which later will be investigated by the International Military Tribunal. The video in question recorded: illegal crossing of the Ukrainian border, participation in illegal armed groups, conduct of military hostilities and terrorist activities, evidence of mercenary activities, and other illegal actions carried out by the subject.

Under Ukrainian law, video recording of the deed of crime is permitted. Besides, the subject presented in the video does not conceal his participation in illegal armed groups. On his publicly available pages in social networks, he has repeatedly published pictures of himself carrying weapons in the area of military activities in the territory of Ukraine.
Feeling his impunity and protection by the state system of the Russian Federation, he committed serious war crimes and crimes against humanity; therefore, his complaint about the violation of his privacy is a cynical challenge to the entire world security system.

Given that the subject has conducted his criminal acts on the territory of Ukraine, the issue should be governed by the Ukrainian law.

Article 7 “Confidential Information” of the Law of Ukraine “On Access to Public Information” reads as follows:

Article 3 of the Law of Ukraine “On the Fight Against Terrorism” reads as follows:

“The fight against terrorism is based on the following principles:integrated use for this purpose of political, social, economic, outreach, and other opportunities; priority of preventive measures; inevitability of punishment for those taking part in terrorist activity”;

Besides the Ukrainian legislation, the American doctrine of Public Interest, enshrined in the rulings of the US Supreme Court, also permits video recording and disclosure of the data pertaining to an offense and an offender.

Furthermore, the British “Terrorism Act 2000” (TA 2000) provides for criminal penalties, including imprisonment, if a person who knows or suspects, or has reasonable grounds for knowing or suspecting, that another person has committed or attempted to commit an offence does not disclose the information or other matter as soon as is practicable after it comes to him. If you represent the people accused or suspected of grave crimes and, in particular, in connection with suspected terrorism, the interests of your clients may conflict with the interests of the society at large.

Also, taking into account that on June 25, 2015, the Parliamentary Assembly of the Council of Europe adopted a resolution recognizing the Russian Federation to be an aggressor country, this video provides an irrefutable proof of the participation of the career officers of the Federal Penitentiary Service of Russia in combat operations in Ukraine. This means that this video should not be treated as the “confidential information” affecting the interests of an individual, but included in the category of national security and fight against terrorism, and qualified among preventive measures and outreach activities aimed at preventing further acts of terror.

Besides, the YouTube’s policies permit placing videos with graphic images of violence or terrorism-related videos with the aim of documentation, if further clarification is provided (which is done in the video itself).

This video was made public in order to attract the attention of international organizations fighting terrorism and to document and preserve the evidence of a committed crime, namely, an act of terrorism.

We hope that YouTube administration will take into account all the facts provided, evaluate independently the video, to which the complaint about the breach of confidentiality refers, make a decision in favor of the protection of the national interests of Ukraine, and ensure public access to the facts of Russian aggression.

Besides, the subject of offense may, at any time, receive further illegal orders to penetrate the territories of other countries for the purpose of terrorist acts in the interests of the Russian leadership. Unveiling and making public such crimes and data is a safeguard against his possible entry into other countries without prior scrutiny.

Please agree that war crimes and terrorism must be prevented, and that awareness of a wide public can provide protection for tens and hundreds of thousands of people around the world. “Forewarned is forearmed.”

We are looking forward for a positive decision on the part of YouTube administration, and the prevention of the concealment of the activities of a person recording his own acts of terror and war crimes. Terrorism has a face, and fighting it is the cause of each and every one of us.

The international community today is facing new security challenges. Terror tactics used by criminal gangs, and even by security services and military personnel of entire nations take on horrifying proportions. The deceitful rhetoric used by Kremlin in combination with its flexible methods of searching for the imperfections in the existing legal systems and exercising pressure through legal gaps creates premises for the impunity of the perpetrators of Russian war crimes in the territories of other states. We call upon the members of the public, the media and the politicians to pay attention to the new challenges and to take appropriate measures at both the legislative and political levels to ensure the information protection of the rights and national interests of the society, which should prevail over the interests of war criminals and terrorists.

3 Responses to “An Open Letter to YouTube: A Terrorist of the Russian Federal Penitentiary Service Filed a Complaint for ‘Breach of Confidentiality’”