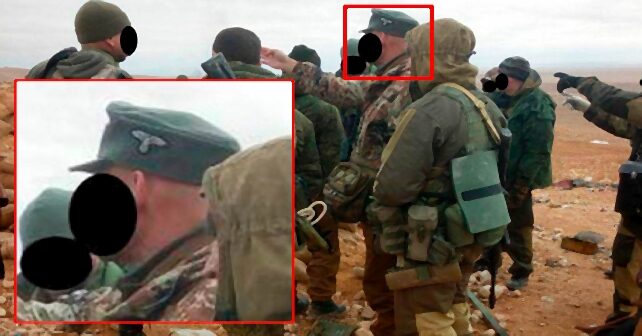 Russian mercenaries are becoming an increasingly hot topic as traces of their activities can be found in conflicts around the world. Torture and war crimes seem to be not the only dark side of these militant groups as open source evidence reveals some of the fighters following far-right, neo-Nazi ideologies.

Instances of far-right leanings among some members of the armed forces is not unheard of in many other parts of the world, including Europe and North America. This is an increasingly common problem in Russia as well. Even more, the type of far-right ideology expressed in Russian mercenaries is showing homage to Nazi ideology.

This type of ideology espoused by Russian mercenaries remains anathema in a country where millions died fighting Nazis during World War II. The slogan “to fight fascism” was one of the rallying points inviting Russian volunteers to fight in Donbas against “Ukrainian Fascists”. Russian President Putin has called Ukraine a fascist country numerous times, yet the numerous mercenaries who went to fight in Donbas, Syria and Libya are neo-nazis themselves. This article analyses some of the available open source evidence, shedding light on Russian mercenaries’ extreme ideology.

Dmitry Utkin is the founder of the infamous Wagner mercenary group. It has not been verified if Utkin established the group himself, or was a front man for someone else. Utkin is the veteran of both Chechen wars and has participated in the Russian operations in Ukraine in 2014. He served in the GRU until 2013, after which he commanded a Spetsnaz unit, earning the rank of a lieutenant colonel. In 2013 he joined the Moran Security Group and in 2014 he established the Wagner Group, named after his nom de guerre his old callsign “Wagner.”

In 2016, Utkin was invited at a Hero of the Fatherland reception in the Kremlin, where he was photographed wearing his medals. This event was attended by more than 300 soldiers and civilians, who have “demonstrated particular courage and heroism” and were personally thanked for their service by Putin himself. At the event he was awarded with the Order for Courage, allegedly for his services in Ukraine.

Photos of Dmitry Utkin: 1. Russian President Vladimir Putin with members of the Wagner Group of mercenaries and Utkin (top). 2. Photo of Utkin, back when he was serving in the Russian military in Dagestan in August 1999 (bottom). (scmp.com, Twitter/@RobLee85)

A photo recently surfaced of Utkin with Nazi tattoos, giving additional proof of his ideological leanings. For those who been following Wagner group for some time this photos was not surprising, as his and a lot of Wagner fighters’ ideological inclinations were already known. The photo originally surfaced on Russian VK accounts and a Telegram group affiliated with the mercenaries, but received interest by media outlets just recently.

Taking a closer look at the photos, Nazi collar tabs with Waffen SS bolts on the left and military rank on the right can be identified. Lower on the chest, a Reichsadler Eagle, can be seen. All three of these tattoos are symbols found Waffen-SS military uniforms, which was the military branch of the Nazi Party’s SS organization.

When this photo surfaced, some concerns online were expressed about the person in the photo. In order to check if the person in the photo is really Utkin, an old passport photo of him was used with Microsoft Azure face recognition software. This software allows to compare two photos and give a confidence rating of how likely it is that the two faces belong to the same person. A score above 0.7 suggests with high reliability that it is the same person. In this case, the score given by Microsoft Azure was 0.71723.

Face comparison with Microsoft Azure revealed that the confidence score that this is the same person is very high (0.71723). (Twitter/@Kyruer, spisok-putina.org, Microsoft Azure)

Lastly, a photo has surfaced in 2020, where a group of alleged Wagner soldiers in Syria were led by a man with a Wehrmacht hat. The photo where the alleged mercenaries receive instructions appeared on Milinfolife channel. Even though the exact location of the photo is unknown and the faces of the soldiers in the photo are blurred, the man in the wearing the hat is suspected to be Utkin. The bald head and the shape of an ear visible in the photo suggests, that the person in question could be Utkin.

A photo of a group of alleged Wagner soldiers in Syria receiving instructions from a man with a Wehrmacht hat. (lenta.ru)

Yan Petrovsky, the vice-commander of the “Rusich” task force, has fought in Ukraine supporting the military operations to aid the Lugansk and Donetsk People’s republics in 2014-2015. Due to his actions in Ukraine, he has been deemed a war criminal by the Ukrainian authorities. Rusich is a Russian neo-Nazi paramilitary group, who actively fought not only in Ukraine, but also in Syria. According to social network research done by Frontline Forensics, there is substancial cross-affiliation between Rusich and Wagner groups.

OSINT research conducted by Norwegian media outlet NRK.no, has concluded that Petrovksy was fighting in various regions of Syria and Ukraine, actions for which he was arrested and deported from Norway. Leaving aside the compelling research done by NRK.no, some of the verified photos show Petrovsky’s leanings towards far-right/Nazi ideology.

In numerous photos Petrvosky was captured giving the Nazi salute during his time in Syria. These photos were not only geolocated to show exactly where he was, but also his identity was verified despite the blurred faces in the photos.

Additionally, Petrovsky has also been posing for numerous photos with hate symbols. Some of the most common symbols used by Petrovsky are the Tyr rune and Valknot. The Tyr rune is an ancient runic symbol that was by the Nazi regime and has become popular among white supremacists, including the Nordic Resistance Movement a far-right political movement in Sweden and Norway. The other rune is Valknut – three interlocking, known as the “knot of the slain,” the Valknut represents the afterlife.

Lastly, the far-right ideology traces within the Wagner group can be traced with their use of specific symbols, which can be classified as hate symbols, most of them originating or related with Nazi ideology.

Some of the most common symbols used by Russian mercenaries are the runic insignia, or runes. One of the most used is the Othala rune, which was previously used on an SS infantry flag in World War II. This rune symbolizes “heritage; inheritance, inherited estate” and has become a favored symbol among white supremacists. An example of Wagner group’s use of this rune comes from Libya, where some of their military vehicles were photographed marked with these runes.

Another common rune is Tyr, a rune associated war. Its association with war meant that the SS thought of it as the “Kampf” or battle rune, symbolizing military leadership. Russian mercenaries in Central African Republic have been photographed with this rune on their uniform.

Russian mercenary in Central African Republic giving interview with runes on his uniform. The first rune is the Siegrune and the second one is the Tyr rune. (Twitter/@RomanPoplkov1, NordFront.se)

The use of runes to spell stylized sentences and words in both Russian and English have been recorded as well. For example, such letters were used for promotional purposes of the “Mercenary Community Wagner Group” or “Быть воином – жить вечно” (Russian for: To be a warrior is to live forever).

Runes used as stylized letters to spell out words in English and Russian. (Twitter/@RaLee85, Twitter/@RuslanTrad)

Lastly, numerous photographic evidence can be found online from conflict zones, where Russian mercenaries desecrate houses and mosques with such symbols. Below are examples from the Libyan conflict, where Wagner mercenaries have left signs of Swastikas, SS runes and other hate symbols in the territories taken under their control. The writing on the wall says in Russian: “I see mosques in Russia, but it’s better to see them burn in hell”. 14/88 is a combination of other Nazi associated hate symbols: 1) 14 (shorthand for the “14 Words” slogan: “We must secure the existence of our people and a future for white children”) and 2) 88 (standing for “Heil Hitler”). This sign was left by Russian mercenaries in a Tripoli suburb.

Markings left by Wagner mercenaries in Libya, including a Swastika, SS runes and the numbers 14/88. (Twitter/@Kyruer)

Numerous fighters serving in various Russian mercenary groups, infamous for war crimes around the world, are followers of radical right ideologies and even neo-Nazi ideology. One of the most prominent narratives that Kremlin populates is that Russia is the main or sometimes even the sole country responsible for defeating Nazi Germany in World War II. The strong despise towards anything Nazi and Fascist, which in Russia often come as synonyms, is deeply rooted in the society. However, open-source evidence suggests that fighters sporting neo-Nazi symbols serve in military groups associated with Kremlin, including the founder of the infamous Wagner group.

No Responses to “Signs of Neo-Nazi Ideology Amongst Russian Mercenaries”