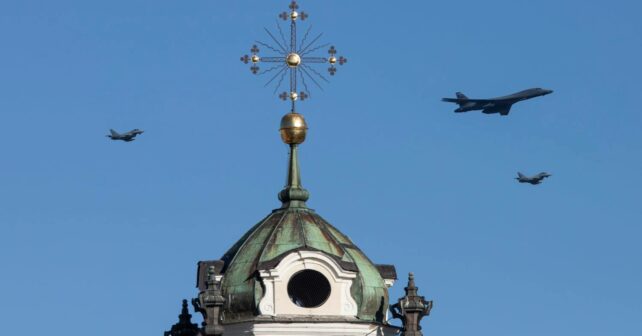 Recent analysis has shown that hostile media sources have switched their focus from the military agenda of NATO to the political one, with various messages targeting the international agreements of the Alliance and questioning its commitment to the principles of international security and peace. Analysis of the disinformation flow in January indicated that false and misleading articles about NATO aimed to reach domestic audiences in Russia. Notably, one of the most prominent cases was a conspiracy that NATO was behind the protests against the detention of Alexei Navalny in Russia and plans to interfere in the upcoming Russian elections.

In January 2021, Debunk EU reviewed 3124 articles with potentially harmful content were reviewed and identified 720 articles with false and misleading content. They were distributed in 82 media outlets in the Baltic countries in English, Estonian, Latvian, Lithuanian, and Russian languages. The articles had a potential reach of 546 million contacts.

Compared to the previous month, in January false and misleading coverage on NATO dropped by almost a quarter in terms of mentions per problematic case and decreased almost in half as measured by the potential contact reach. Those trends affected the general distribution by types of information as well, resulting in disinformation being identified in less than every fourth publication about NATO. On average, around 23 false and misleading content pieces were identified per day.

In January, problematic information targeting NATO in the Baltic countries increased in the second half of the month, reaching its peak on January 17th, caused by the reaction to the interview given by the ex-chancellor of Germany to Der Spiegel, which was used to address readers with false claims of NATO supposedly being provoking annexation of Crimea by Russia back in 2014. Despite its viral coverage, the interview of Gerhard Schröder had had only a temporal effect on distribution of problematic information, as other stories gained a higher track in hostile media sources.

The analysis has shown that the increase in false and misleading information on NATO was influenced more by external factors that were outside the agenda of the Alliance, and tended to be reactive, rather than planned in advance. This trend was also supported by the analysis of the articles, measured by DebunkReach®, which showed that some events, such as January 11th inspection of Russian merchant ship “Adler” in the Mediterranean Sea within IRINI international mission framework, presented itself as ‘windows of opportunities’ for hostile actors to address false and misleading messages on NATO.

One of the most prominent waves of disinformation was witnessed on January 23rd, when the message of NATO countries supposedly orchestrating the protests in Russia circulated among Lithuanian Facebook users. In addition, the original post on Facebook was generated by the same user in multiple public groups & pages and sought to amplify the pro-Kremlin narratives concerning Russian opposition leader Alexei Navalny, while presenting the protests as yet another manifestation of the ‘colour revolution’, coordinated by the West.

According to Debunk EU data, in January disinformation about NATO was potentially intended to reach domestic audiences of the Russian Federation, amounting for up to 85% of contacts reached in Russia. Foreign audiences in countries with a Russian-speaking population and/or diaspora were potentially targeted as secondary audiences, namely, in Ukraine, Belarus and Kazakhstan.

In January, hostile media showed slightly higher interest in political agenda of NATO, focusing on the international activity and/or statements of the representatives of the organization, rather than to issues, related to military agenda of NATO.

Emphasis on the political agenda of the Alliance increased after January 15th announcement of the representative of the Russian MFA about Russia’s withdrawal from Open Skies Treaty and was influenced by the Kremlin’s strategy to divert the attention from its own responsibilities and commitments to uphold international agreements, by openly accusing NATO of unconstructive behaviour and lack of trust.

Statements on the threatening nature of the expansion of NATO towards the Russian boarders were repeated throughout the month, with accusations voiced by senior Kremlin officials that NATO is supposedly conducting hybrid warfare against Russia. There were a couple of conspiracy statements spread by hostile media sources, such as that ‘NATO countries are planning to meddle and interfere into upcoming national elections in Russia’ or ‘NATO special services instructing Alexei Navalny and orchestrating protests in Russia’.

Apparently, it was there, in a mountain hut that Navalny was given the text of his alleged investigation about allegedly “Putin’s palace” near Gelendzhik. Initially, the text was clearly written in English and translated into Russian so clumsily that some bloopers just cause laughter. Here the NATO special services have a blowout. (vesti.ru 24/01/2021)

The commission has no doubts that behind the scenes of the global information and political performance of recent days, as well as behind the instigators of illegal actions on 23 January, there are state structures of NATO countries and their special services. (RIA.ru 27/01/2021)

Speaking of the military agenda of NATO, in January the focus fell on the strengthening of the defensive capabilities in Romania, Baltic countries, Poland, and Norway. Kremlin related media also targeted the movement of NATO allied ships in the Black Sea and Arctic Ocean, as well as the upcoming international military exercises Defender Europe 2021. Noteworthy, the communication about exercises was based on several opinion pieces of war correspondents from Kremlin-funded VGTRK media group and Sputnik, which were presented as hard facts. However, those experts based their opinions on scenarios from Defender Europe 2020, while abstaining from providing any references to official NATO statements on the exercises, which at the time of reporting were absent and are yet to come.

The Americans are unwavering in their determination to support their allies in Europe and are preparing for the most ambitious manoeuvres since the Cold War. They will be called “Defender Europe – 2021”. <…> This is exactly how, by proxy, the United States is increasing its military presence in Europe from year to year. Russia is well aware of this and has already reported that a response to NATO military exercises will follow immediately – Moscow and Minsk are preparing to conduct joint strategic exercises “West-2021” (politexpert.net 27/01/2021)

Publications cantered around these topics sought to present the Alliance as acting in ‘offensive’ terms, with an emphasis put on the supposedly ‘provocative’ manner of deployments and military movement of NATO ships and aircrafts.

In January 2021, false and misleading narratives distributed evenly between NATO member states, with the narrative ‘NATO is a threat’ applied to all members of the Alliance universally and the rest of the narratives maintaining similar distribution levels.

Compared within country mentions, United States led in terms of mentions in false and misleading publications on NATO. Measured by proportion, the country also stood out in the application of narrative ‘NATO is untrustworthy’, which in relation to other member states was applied specifically to it due to a high visibility of Russia’s withdrawal from Open Skies Treaty.

In terms of differences in the ranking of the countries, Hungary, Albania, and Montenegro in January received considerably more negative coverage as compared to December 2020 and within positions held by other NATO countries. This change was significantly affected by increased interest of the Kremlin-related media outlets in NATO military exercises ‘Defender Europe 2021’, and its planning phase, according to which, the exercise might take place in the former mentioned countries.

In January, problematic information was mostly published in the Russian language (87.4%), followed by Lithuanian (10.4%) and Latvian (2.2%) languages, respectively.

The main distributors of NATO-related disinformation & misinformation in the Baltic countries were technowar.ru, rambler.ru, sputniknews.ru and ria.ru, which made up to a fifth of the overall coverage.

In terms of distribution by media sources, rambler.ru, ria.ru and lenta.ru stood out in the audiences covered, amounting for slightly more than a half (51%) of all potential contacts reached in January. Dominant role of Russian language outlets, this month, was largely influenced by the absence of publications in English, which constituted up to 10% of potential contacts reached back in December 2020.