The influence operation run by Yevgeny Prigozhin, who was just added to the FBI Most Wanted list, has new targets right in the heart of Europe 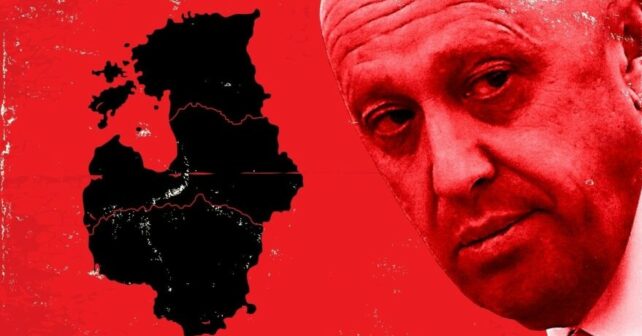 He’s sent Wagner mercenaries to Ukraine, Syria, and Libya; faced U.S. indictments for assigning his “troll farm” to interfere in the 2016 presidential election; and even dispatched white supremacists and neo-Nazis to sow anti-Western sentiment in African nations. Now Yevgeny Prigozhin, the catering magnate commonly referred to as “Putin’s chef,” has trained his attention a little closer to Russia’s doorstep: Europe and the Baltic States.

The Baltic Sea Region Strategic Dialogue was the first of what is meant to be a series of so-called “foresight sessions” to “create a new vision of the post-pandemic future” for the aforementioned countries, with an ostensible focus on COVID-19, Brexit, environmental sustainability, e-governance, and digital technology. Participants included Rihards Kols, the head of the Foreign Relations Committee of Latvia’s parliament, as well as several members of the German Bundestag including Stefan Keuter, a member of the far-right Alternative für Deutschland (AfD) party.

The event was organized by two organizations, both of them closely connected to the Association for Free Research and International Cooperation, or AFRIC.

As The Daily Beast reported, AFRIC is run by Prigozhin’s St. Petersburg-based organization. According to internal documents obtained by the Dossier Center, AFRIC was conceived as a “network of agents of influence” meant to provide “expert evaluations and opinions beneficial to Russia” in Africa. Founded in 2018, AFRIC sent “election observers”—many of them well-known white supremacists and neo-Nazis from Europe—to try to sway democratic races in Zimbabwe, Madagascar, Democratic Republic of the Congo and South Africa, in races in which other arms of Prigozhin’s vast empire often supported one or more of the candidates.

As with most of Prigozhin’s foreign influence operations, this one consists of a series of nesting doll structures registered outside of Russian Federation territory and helmed, at least on paper, by non-Russians. The same cast of characters recurs, both at the hierarchical level of these operations and among the Western political figures they aim to cultivate.

For instance, one of the organizers of the conference was ADMIS Consultancy, a company founded and operated by Vaiva Adomaityte, a Lithuanian national who is also a member of AFRIC’s administration. An occupational psychologist and self-described “global change expert,” Adomaityte has participated in at least one of AFRIC’s three conferences in Berlin, co-authored its “Africa Vision” report, and has been an AFRIC representative at the Russia-Africa summit in Sochi in 2019. She is also a confidante and associate of Yulia Afanasyeva (Berg), the Prigozhin operative who established AFRIC in 2018 out of the oligarch’s “back office” in St. Petersburg, as leaked documents obtained by the Dossier Center demonstrate.

Adomaityte previously edited a questionnaire written by Afanasyeva for AFRIC’s similarly named “foresight session” in Berlin in 2019. She also wrote to the Hilton Hotel complaining about substandard accommodations and to settle AFRIC’s billing dispute with the management. Adomaityte even updated her résumé to account for her work on behalf of AFRIC. In one awkwardly worded letter dated March 3, 2020, she wrote to Afanasyeva in English, “Shall I start calling you my God Mother I wonder… sounds much ore badass then God Father.”

AFRIC-related events, in fact, appear to be the only ones with which Adomaityte’s ADMIS Consultancy has ever worked. Afanasyeva even hired and paid for a Russian social media expert to work on ADMIS Consultancy’s social media pages, as per the correspondence obtained by the Dossier Center. The Baltic Sea event in January took place in the same Hilton Hotel in Berlin as previous AFRIC conferences. One of the earlier events was presided over by Aleksandr Malkevich, a top Prigozhin operative who was sanctioned by the U.S. Treasury Department in 2018 for running a subsidiary company working on behalf of the oligarch’s Project Lakhta, a global political and election interference operation. Malkevich, according to the Treasury Department, ran a company called USA Really, which “engaged in efforts to post content focused on divisive political issues but is generally ridden with inaccuracies. In June 2018, USA Really attempted to hold a political rally in the United States, though its efforts were unsuccessful.”

Still another co-organizer of the Baltic Sea conference was the Federal Association for Economic Development and Foreign Trade in Germany, better known by its acronym BWA. BWA and ADMIS consultancy co-hosted AFRIC’s last event in Berlin, an online conference on global consequences of COVID-19 in June 2020.

BWA is headed by Michael Schumann, a German business consultant specializing in China. Under Schumann’s leadership, BWA has developed partnerships with a series of Russian outfits in Germany including the Association of Russian Businesses and the Dialogue of Civilizations think tank, which was founded in 2016 by Vladimir Yakunin, a former KGB officer and close confidant of Vladimir Putin. Yakunin was the vice president of Russia’s state rail monopoly until 2015, a year after he was sanctioned by the United States for his alleged involvement in Russia’s invasion of Ukraine. So far he has evaded EU sanctions.

Two other BWA members, Volker Tschapke and Urs Unkauf, acted as AFRIC election observers in Madagascar, DRC, Zimbabwe and South Africa in the past few years. Tschapke and Unkauf were also present at AFRIC’s second and third conferences in Berlin, in July 2019 and January 2020, respectively. Yulia Afanasyeva, Prigozhin’s St. Petersburg-based operative, is also a member of BWA.

Afanasyeva did not respond to The Daily Beast’s request for comment on this story.

Adomaityte said in a Zoom interview that she had no information about Afanasyeva’s involvement in the Baltic Sea conference and that she “felt uncomfortable” talking about AFRIC. She claimed that she was directly hired by BWA in Germany. “We did [earlier] work together with BWA with the AFRIC institution,” she said. “So that was the direct link. However, I was directly requested by the BWA to conduct the research study for the Baltic Sea region.”

This account, however, is contradicted by documents obtained by the Dossier Center indicating that not only was Afanasyeva actively involved in organizing the Baltic Sea event, which she attended virtually, but she was in constant communication with Adomaityte about it. Afanasyeva was included in a back-and-forth exchange setting up the venue in the Berlin Hilton; Adomaityte further kept the Russian abreast of how everything had gone.

“When we look at the backgrounds [of the people involved], the connection to Prigozhin is clearly visible,” said Indrek Kannik, the former head of analysis of Estonia’s Foreign Intelligence and now the director of the International Centre for Defence and Security in Tallinn. He said the Baltic intelligence services likely follow such influence operations closely.

According to a person with direct knowledge of how the Baltic Sea conference was organized, Afanasyeva gave a direct order not to touch on matters of international security and instead focus on economics and ecology. That, too, Kannik said, is textbook tradecraft for the early stages of any successful influence operation.

“It is noteworthy that they started with politically uncontroversial topics such as the green deal,” Kannik told The Daily Beast:

“They start ‘soft’ and only when they gain some public trustworthiness and a moderately positive image, they take on more relevant topics for the Kremlin such as security, criticism of the Baltic states, Russia’s talking points about dialogue between Europe and Russia, not to mention everything else to do with Crimea and Ukraine.”

Another classic tradecraft technique employed by the conferences was employing unwitting foreigners to make the events appear legitimate, in this case by producing ancillary literature. A “strategy recommendation” report, released subsequent to the Berlin conference and branded as an ADMIS Consultancy product, was written by unsuspecting freelancers hired over the internet, The Daily Beast has confirmed. In September, U.S. news outlets reported that Prigozhin’s Internet Research Agency, or “troll farm,” had set up two fake news websites—one catering to the far right, the other to the far left—which hired unwitting American writers to contribute. Even the avatars of the putative editors of these sites were bogus, their faces generated with AI software. The goal was clearly to launder disinformation and propaganda through native participants, whose worldviews intersect with Kremlin interests.

The danger with bricks-and-mortar operations like the conferences is that they’re liable to snare respectable and credible participants who are fixtures at similarly themed events. And the participants don’t necessarily have to be influenced or persuaded by Russia propaganda; their mere presence is itself an operational success. Having, say, a government minister from an EU or NATO country photographed alongside a Prigozhin operative is a great way to signal back to Moscow that these exercises pay off.

In October 2014, months after Russia’s invasion and occupation of Crimea, the psychological warfare of the GRU, Russia’s military intelligence agency, orchestrated an entire security conference in Athens using cut-outs and front groups including a local Greek think tank and a Russian institute purportedly devoted to Russian diaspora issues. According to Estonia’s foreign intelligence service, an officer from GRU Unit 54777 even participated in a panel discussion next to Panos Kammenos, a Moscow-friendly Greek politician who subsequently became Greece’s defense minister.

One of the people invited to give a presentation at the Baltic Sea event was Mihkel Krusberg, an Estonian official from the Ministry of Environment. He received a personal invitation from Adomaityte a little over two weeks ahead of the conference. Because Krusberg is frequently asked to attend such forums and the other publicly named guests appeared legitimate, Krusberg told The Daily Beast he didn’t see any red flags in the offer. “Had I known about the background of the organizers, I would have politely turned down their invitation,” he said.

The Baltic Sea Region Strategic Dialogue was not envisaged as a one-off affair. The same group of organizers is already planning a follow-up conference to focus on the relationship between the Baltic and Nordic countries. According to Adomaityte, it’s scheduled to take place online in late March. “However we are really hoping to have a physical conference in the summer,” she said.

No Responses to “The influence operation run by Yevgeny Prigozhin, who was just added to the FBI Most Wanted list, has new targets right in the heart of Europe”