Prigozhin’s impersonator exploited in a failed information operation in Lithuania 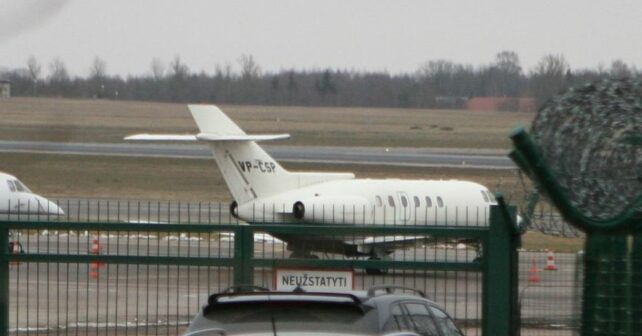 Hawker 800 aircraft owned by Prigozhin in Vilnius / Photo by Scanpix.

Over the past decade entities such as ‘troll factories’ and private military companies related to Yevgeniy Prigozhin, a Russian oligarch close to the Kremlin, have operated worldwide as proxies advancing Russia’s influence. In 2019, the US imposed sanctions on Prigozhin, his companies and assets due to interference in the 2016 US elections. In 2020, the EU put restrictive measures against Prigozhin for violating the UN arms embargo on Libya.

In 2020, Prigozhin’s impersonator was exploited in an information campaign perpetrated against Lithuania. In early 2020, Hawker 800, an aircraft owned by Prigozhin, landed at Vilnius Airport for maintenance but subsequently had to leave without servicing due to the imposed sanctions. At the same time, a person resembling Prigozhin and holding a Russian passport issued in the name of ‘Yevgeniy Prigozhin’ with the same birth date on it as Prigozhin’s – but not real Prigozhin – arrived in Lithuania taking a commercial flight. From the airport the person went straight to the Ministry of Transport and Communications, took a picture in front of the building and went back to the airport for a return flight to Russia. Overall, he spent five and a half hours in Lithuania.

Two weeks later, Prigozhin’s impersonator took a regular flight to Lithuania for a second time. This time his itinerary included taking pictures of the Lithuanian Parliament (Seimas), the National Museum and the Palace of the Grand Dukes of Lithuania. He did not take his return flight scheduled for the same day, instead, he left for Belarus by train on the next day.

In the meantime, the Russian tabloid news website sobesednik.ru covered this story and claimed that Prigozhin had allegedly arrived in Lithuania on his Hawker 800 for a meeting to discuss IT projects with a high-ranking official of the Ministry of Transport and Communications. A subsequent article on sobesednik.ru claimed that Prigozhin had once again come to Lithuania and visited Lithuanian parliament despite being on the sanction list. To add credence to the story, the articles included photos taken by Prigozhin’s impersonator.

Source: The National Threat Assessment report 2021 prepared by the State Security Department of the Republic of Lithuania and Second Department of Operations Services under the Ministry of the National Defence

Other Russian media outlets picked up the story and added even more fictional details, for instance, claiming that Prigozhin had met not only state officials but business executives as well. One item even asserted that the assistant to the Chairman of the Parliamentary Committee on National Security and Defence had expressed his discontent that there were no restrictions for Prigozhin to visit Lithuanian institutions.

Setting the record straight, Prigozhin’s impersonator did not actually meet any of the state officials or businessmen mentioned in the fake news published on Russian media. The intent of such information campaign was likely to undermine trust in Lithuania’s international commitments and probe for loopholes in the Schengen border control. Despite the resources allocated by the perpetrators, neither in Lithuania nor internationally did the story receive any significant traction.

The article is based on the report “The National Threat Assessment 2021” prepared by the State Security Department of the Republic of Lithuania (VSD) and Second Department of Operations Services under the Ministry of the National Defence (AOTD). You can download full report here.