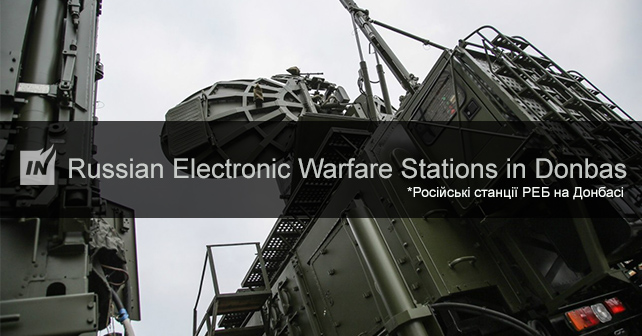 The new OSCE Special Monitoring Mission (SMM) report became a real sensation for the experts. For the first time since the start of the war in Donbas the official report mentioned four newest pieces of the Russian electronic warfare (EW) systems spotted in the occupied territories of Luhansk Oblast of Ukraine. This unique equipment was discovered in the village of Chornukhyne (Luhansk Oblast). All of the pieces are latest Russian arms systems and the fact they were spotted in Donbas is a direct proof of the Russian aggression against Ukraine. We will analyze why this information is crucially important and what could be the reason for OSCE SMM to keep it from public for two weeks.

“In non-government-controlled areas, on 28 July, an SMM mini-UAV spotted four distinct electronic warfare systems (a Leer-3 RB-341V, a 1L269 Krasukha-2 and RB-109A Bylina, and an anti-UAV system, Repellent-1) near Chornukhyne (64km south-west of Luhansk), all seen for the first time by the SMM. On 2 August, during a flight over the same area, the UAV did not spot the same systems.”

While analyzing the data from the OSCE SMM report, InformNapalm researchers singled out two important details:

The RB-109A Bylina is a modern top-secret automatic control system with the main task to coordinate all EW equipment within its range. The RB-109A Bylina serves to cover a large military command post on the level of a brigade or even a bigger military formation. Not much information about this system is available in open sources at the moment, yet, some details can be found in this document.

Other two modern Russian systems 1L269 Krasukha-2 and Repellent-1  discovered by the OSCE SMM are also complicated and expensive EW equipment. It is next to impossible to assume that Russia would pass such systems to the hands of untrained irregulars. The systems, most certainly, are operated by the Russian military servicemen, for these pieces of equipment remain under command of EW troops of the Russian Ministry of Defense and their operation and maintenance require extensive training.

Earlier InformNapalm already published evidence of 9 Russian modern pieces of EW equipment (see all data in our database) discovered in the occupied part of Luhansk Oblast. RB-341V Leer-3, mentioned in the OSCE SMM report, was among them.

The OSCE SMM official report proving the presence of the Russian modern EW systems in Donbas can and should push the world community towards imposing additional sanctions on Russia – the country that gathers hybrid armies, supports, sponsors and manages terrorist groups in Donbas.

It looks like the “spy scandal” within the OSCE SMM will have its continuation, but the mere fact that this report saw the light of day is a game-changer and gives us hope that the OSCE will gradually get rid of the Russian agents.

If you live in the occupied territories of Donbas and you have captured the movement of military equipment on photo or video, which can be further bound to a specific geolocation, please, email it to us and we will get your evidence noticed by people from all over the world:

The analysis was prepared by Kuzma Tutov and Roman Burko especially for InformNapalm. Distribution and reprint with reference to the source is welcome!
Creative Commons — Attribution 4.0 International — CC BY 4.0