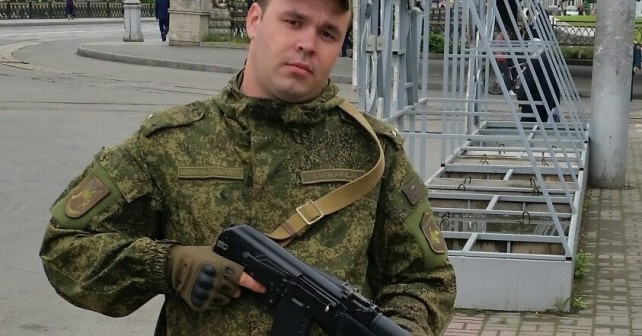 Mr. Galimar is the Russian officer, serving in an artillery battalion of the 17th Separate Motor Rifle Brigade (military unit № 23132, based in Shali, Chechnya) from the Southern Military District.

From 2008 through 2013, Sergey Galimar studied at Mikhailovsk military artillery academy of the Russian Defense Ministry in Saint Petersburg. He graduated from the military school in the second half of 2013 with the rank of lieutenant and was assigned to the 17th Brigade in the Chechen Republic.

Even though the social profile of Mr. Galimar does not contain clear evidence of his participation in the war, there are some hints that confirm it. First of all: here is a photo of the Order of Courage commendation No 76703, dated October 28, 2014, signed by President of the Russian Federation Vladimir Putin. 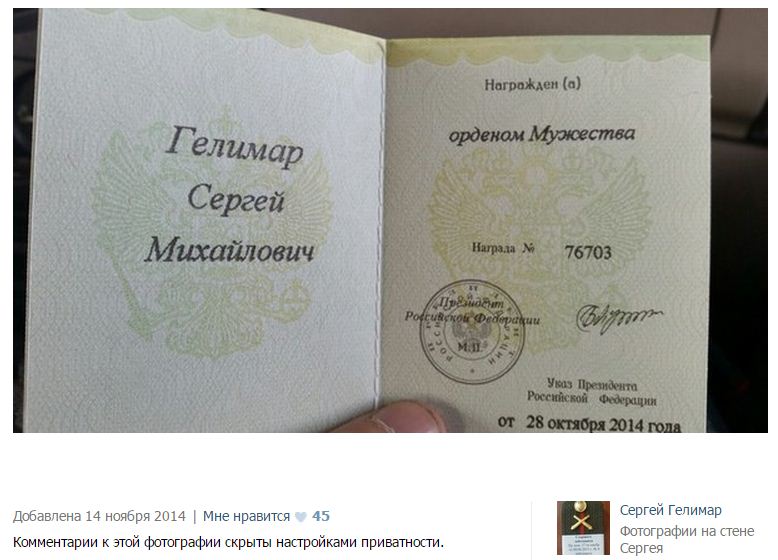 Note: Order of Courage is a state decoration of the Russian Federation awarded in recognition of selfless acts of courage and bravery in protecting public order, fighting crime, in rescuing people during natural disasters, fires, accidents and other emergencies, as well as for bold and decisive actions committed during the performance of military or civil duties under conditions involving a risk to life.

We can come to the reasonable conclusion that Galimar could get an award for his actions “during the performance of military or civil duties under conditions involving a risk to life” having participated in the summer-fall campaign with Russian military forces in Donbas.

Galimar’s photo album contains a number of “Novorossia” banners and an interesting group photo signed as “This is Luhansk, you’ll get your ass kicked here”. There is his photo taken at the Victory Day parade on May 9 in Vladikavkaz, Nothern Osetia, near Terek. Also, there is a photo of the first lieutenant insignia; he received the new rank on June 4th, 2015, by the brigade commander’s order.

It is worth noting that units of the 17th Brigade of the Southern Military District from Chechnya have been repeatedly observed on Ukrainian assignments since September 2014:

Original article by Irakly Komakhidze, translated by Roman Vlasov, edited by Sveta Kemblowski. The initial information referred to S.Galimar was presented by our friends from project “Mirotvorets”.