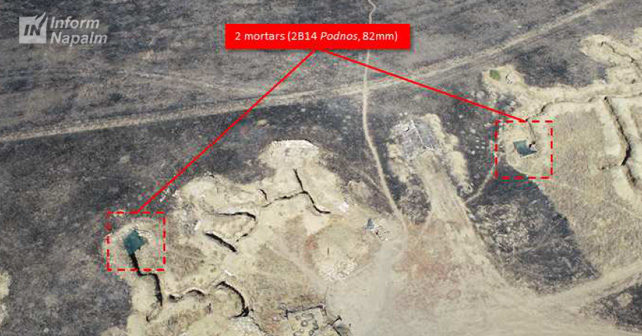 Volunteers of the InformNapalm international intelligence community received from their own sources another visual proof of a gross violation of the Minsk agreements by the Russian occupation forces in the Donbas. It is a photo from the classified part of an OSCE SMM report, which states that two Podnos 2B14 82 mm mortars are deployed only 2 km from the line of contact near the settlement of Veselohorivka, Luhansk Oblast. It should be noted that, according to the Addendum to the Complex of Measures to Implement the Minsk Agreements of February 12, 2015, such types of weapons must be withdrawn to a distance of more than 15 km from the line of contact. 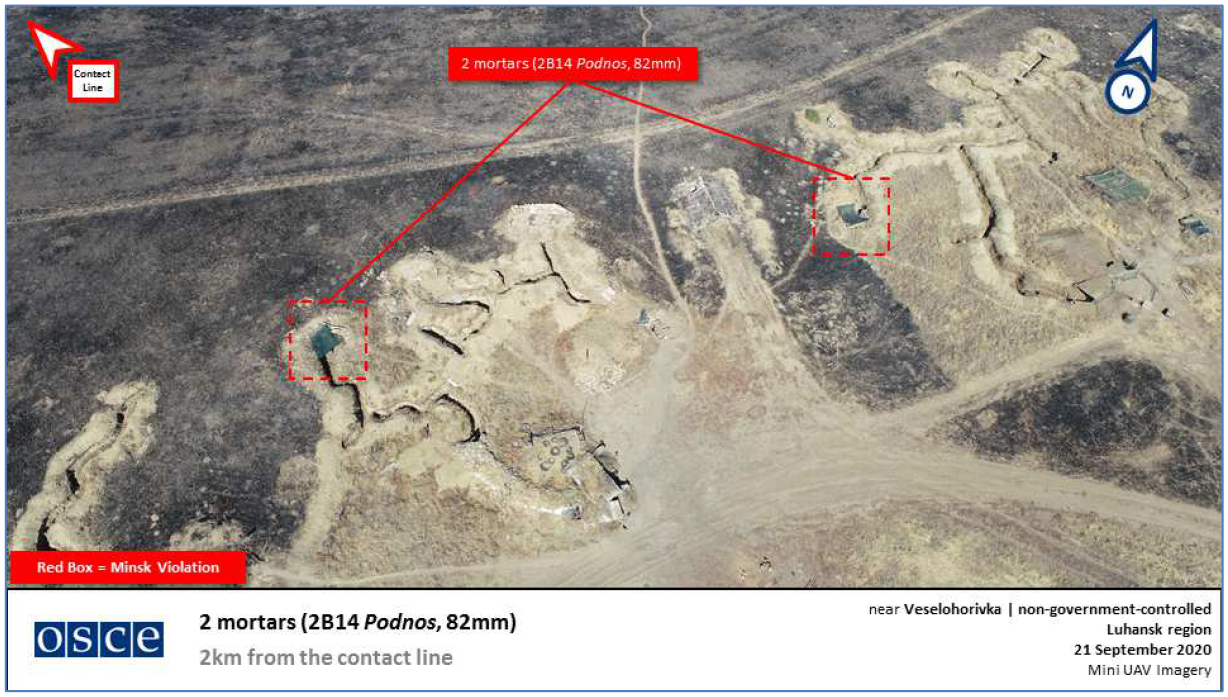 It is also interesting that in the text of the OSCE SMM report №228 / 2020 dated September 24, 2020, the information about the spotting of two 82 mm mortars on September 21 was somewhat distorted and indicated another settlement, Nadarivka, which is a few kilometers farther away from the line of contact. It also stated that one Podnos 2B14 mortar and one Vasilek 2B9 82 mm mortar were observed. The maximum range of the Podnos 2B14 mortar is 3.1 – 3.9 km (depending on the shell type), the rate of fire is 24 shots per minute without correction, or 15 – with correction. And the Vasilek 2B9 mortar has 100-120 shots per minute and a maximum range of 4270 meters.

It is possible that the information in the text report was modified or deliberately distorted to avoid the indication in the report’s open part a gross violation by the Russian occupation forces, evident from the available UAV images. In addition, the indication in the text of the open report of a locality slightly farther from the line of contact could be misleading as to the danger posed by these types of weapons, which can be used (or are being used) for shelling of Ukrainian positions when placed just 2km from the contact line. 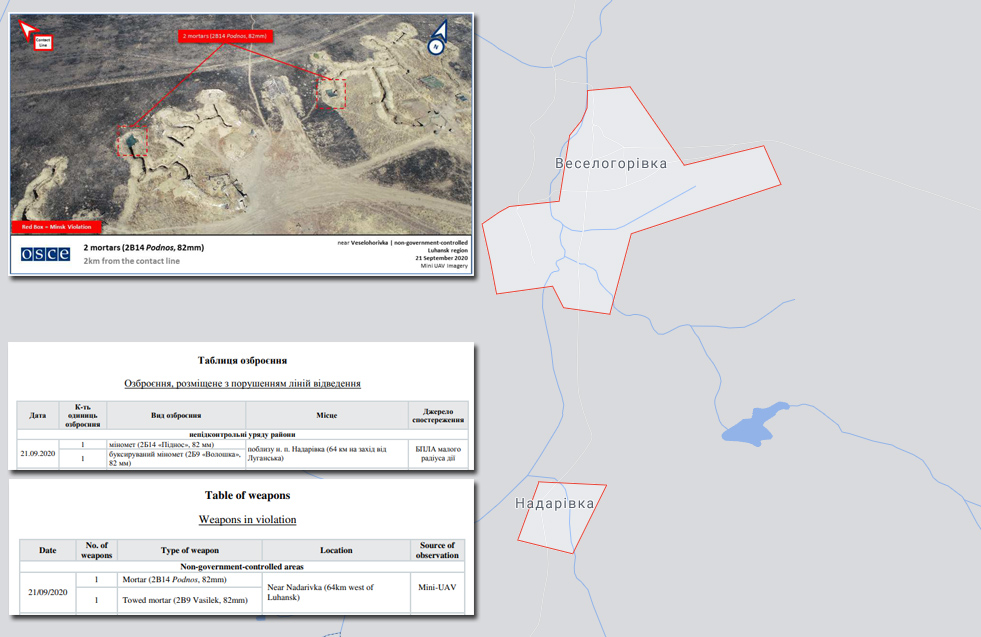 Who benefits from distortions in the public part of the OSCE reports?

During consultative meetings of NGO representatives with the National Security and Defense Council of Ukraine, InformNapalm volunteers also publicly addressed the Secretary of the National Security and Defense Council Oleksiy Danilov and called for an international discussion regarding exclusion of Russian citizens from the OSCE SMM team in the Donbas due to their affiliation with the aggressor country and their operation as de-facto agents of influence. However, these appeals were rejected on the basis that Russia contributes financially to the OSCE and can also block the work of the SMM in Ukraine, because all decisions in the OSCE are taken by consensus – unanimously. This creates certain absurd conditions when the aggressor actually controls and influences international institutions, which leads to both half-hearted decisions and softened terminology, in which Russia is not directly called a party to the conflict. Perhaps, given this sad experience, both the OSCE and the UN need to review decision-making mechanisms so that the aggressor country couldn’t misuse legal formalities as an instrument of influence.

The mortars are positioned on the line between Veselohorivka and Nadarivka, at 48.461591, 38.425495. Since daily updates of OSCE SMM are released the following day, it’s likely that the weekly report with the classified information that included the UAV photos contained corrected details about the type of the mortars and their distance from the contact line. 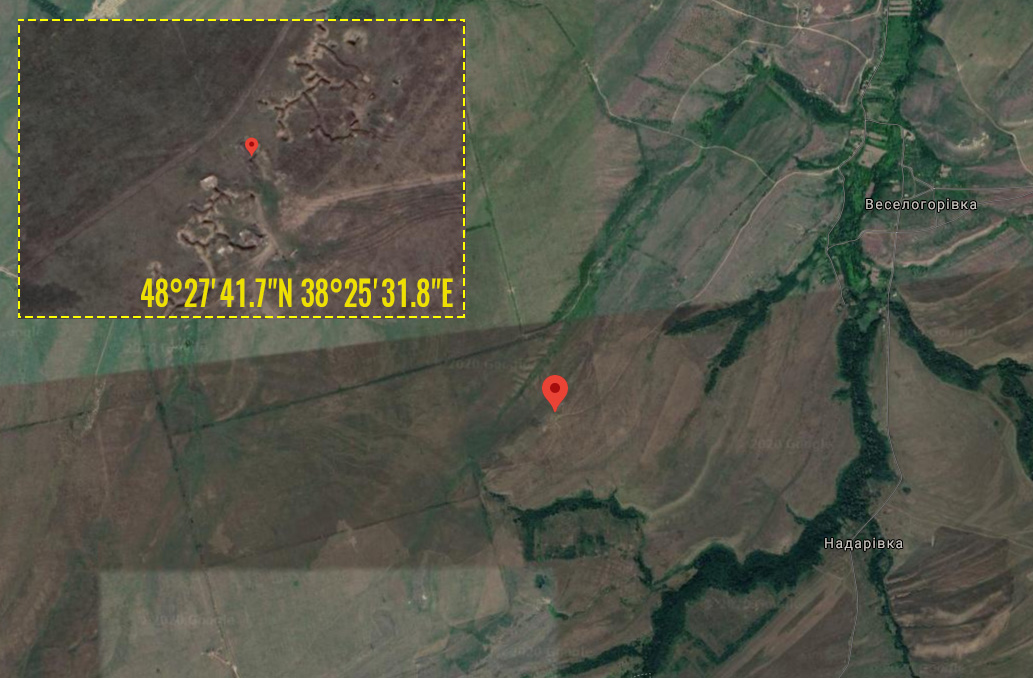 This publication was prepared especially for InformNapalm. Translated by Andrii Gryganskyi, edited by Max Alginin. Distribution and reprint with reference to the source is welcome! (Creative Commons — Attribution 4.0 International — CC BY 4.0)