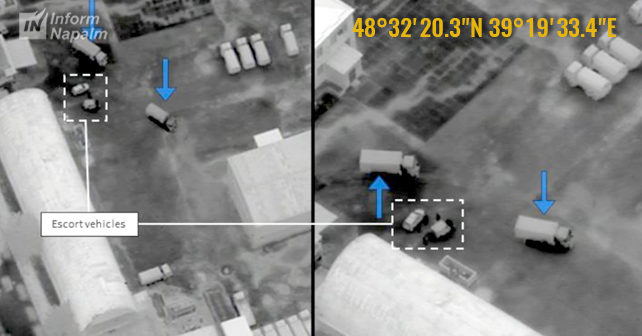 An OSCE Special Monitoring Mission (SMM) daily report No. 134/2020 of June 6, 2020 reported that a long-range unmanned aerial vehicle (UAV) recorded a convoy of trucks that covertly drove into Ukraine in an uncontrolled area of the Luhansk Oblast near the border with the Russia, in places where there are no border crossing facilities. The movement of trucks from Russia was described in sufficient detail in the OSCE SMM report. However, the report did not contain any visual details evidencing the gross violation by the Russian Federation. Volunteers of InformNapalm international intelligence community obtained unique UAV images and did additional geolocation to indicate the precise coordinates of both incursion sites of Russian convoys and their destination in Luhansk Oblast.

Pictures from the OSCE SMM UAV and identification by InformNapalm 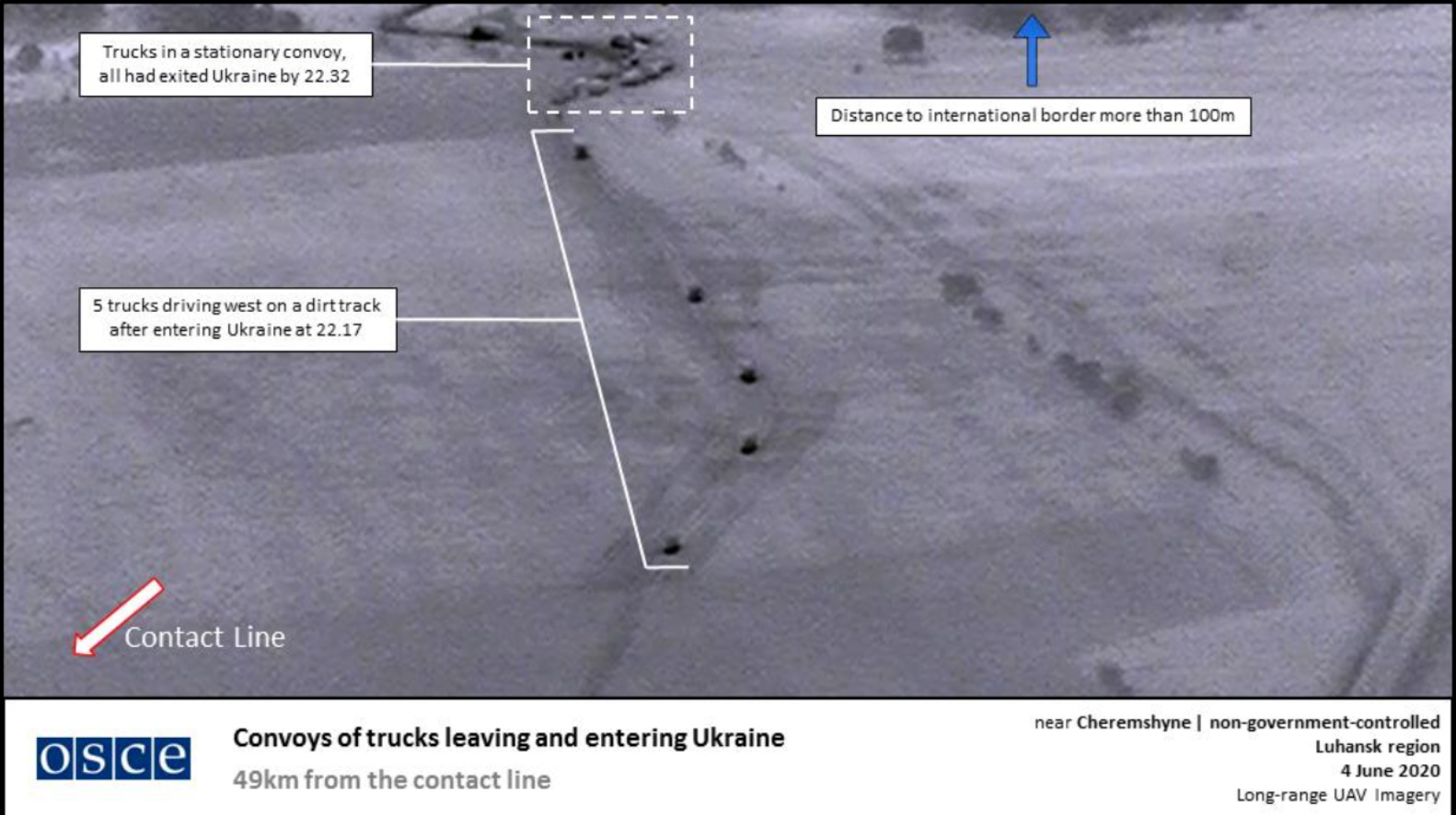 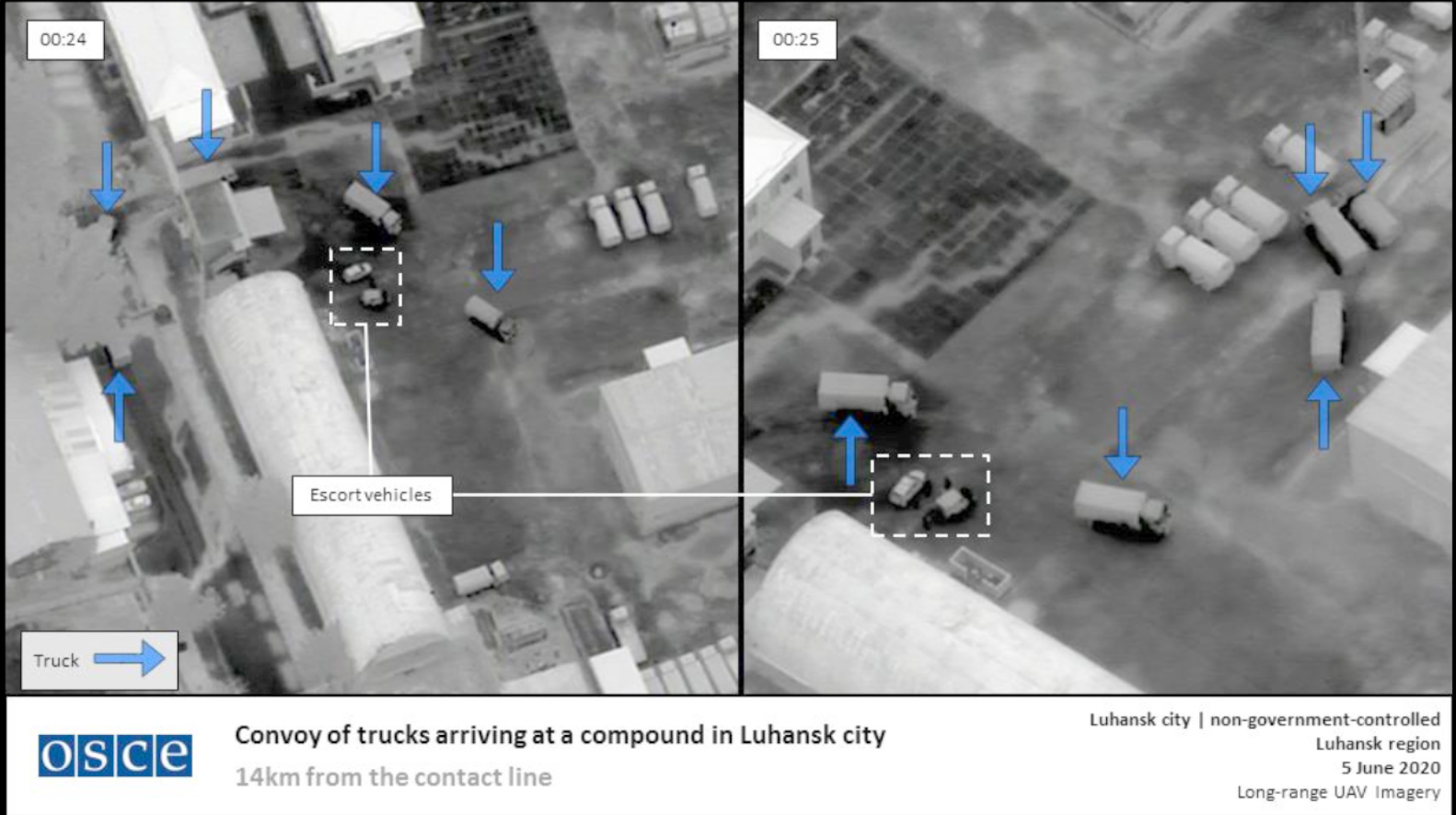 Based on the initial data indicated in the OSCE report, InformNapalm volunteers managed to geolocate the mentioned sites, i.e. to determine the exact coordinates of the images. 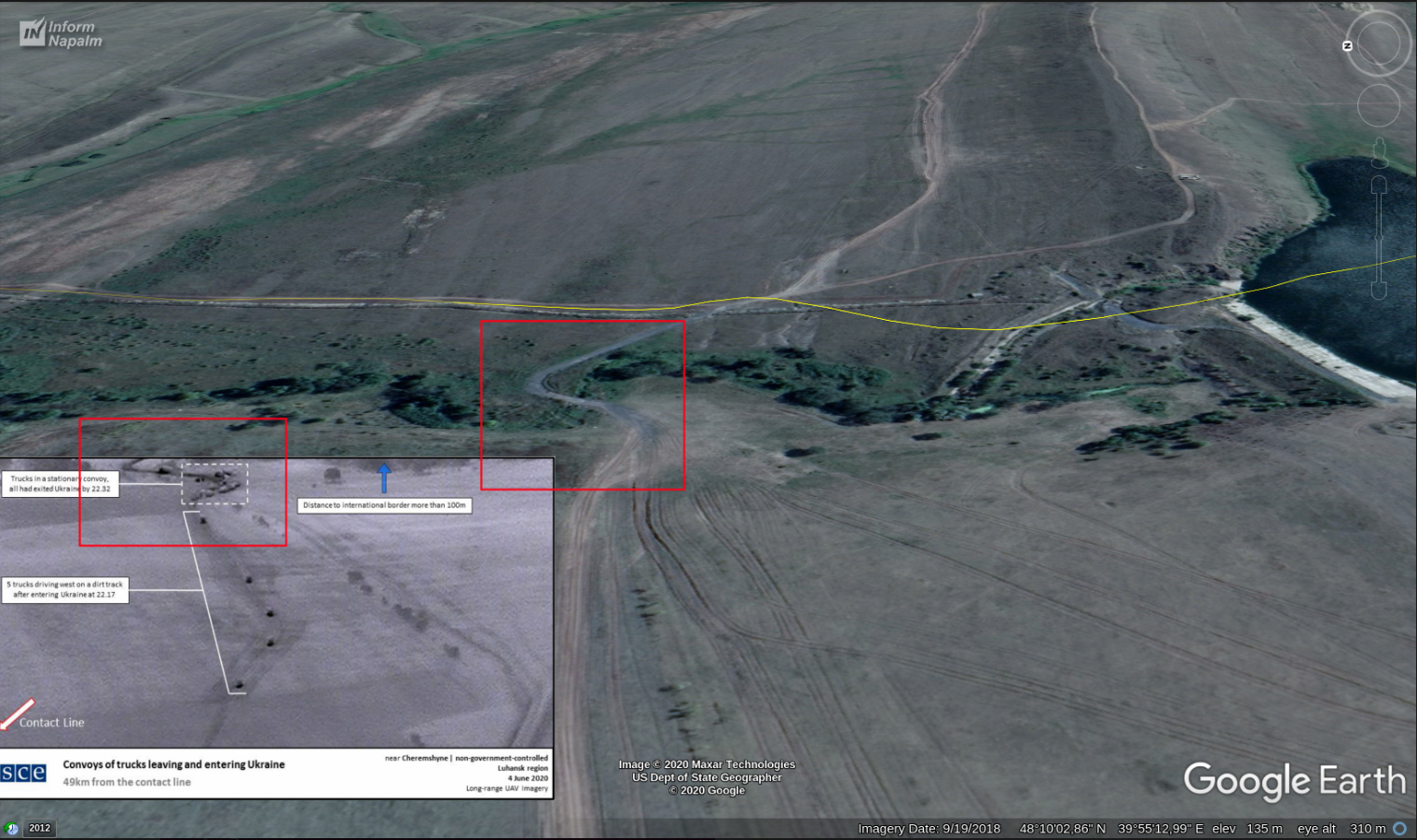 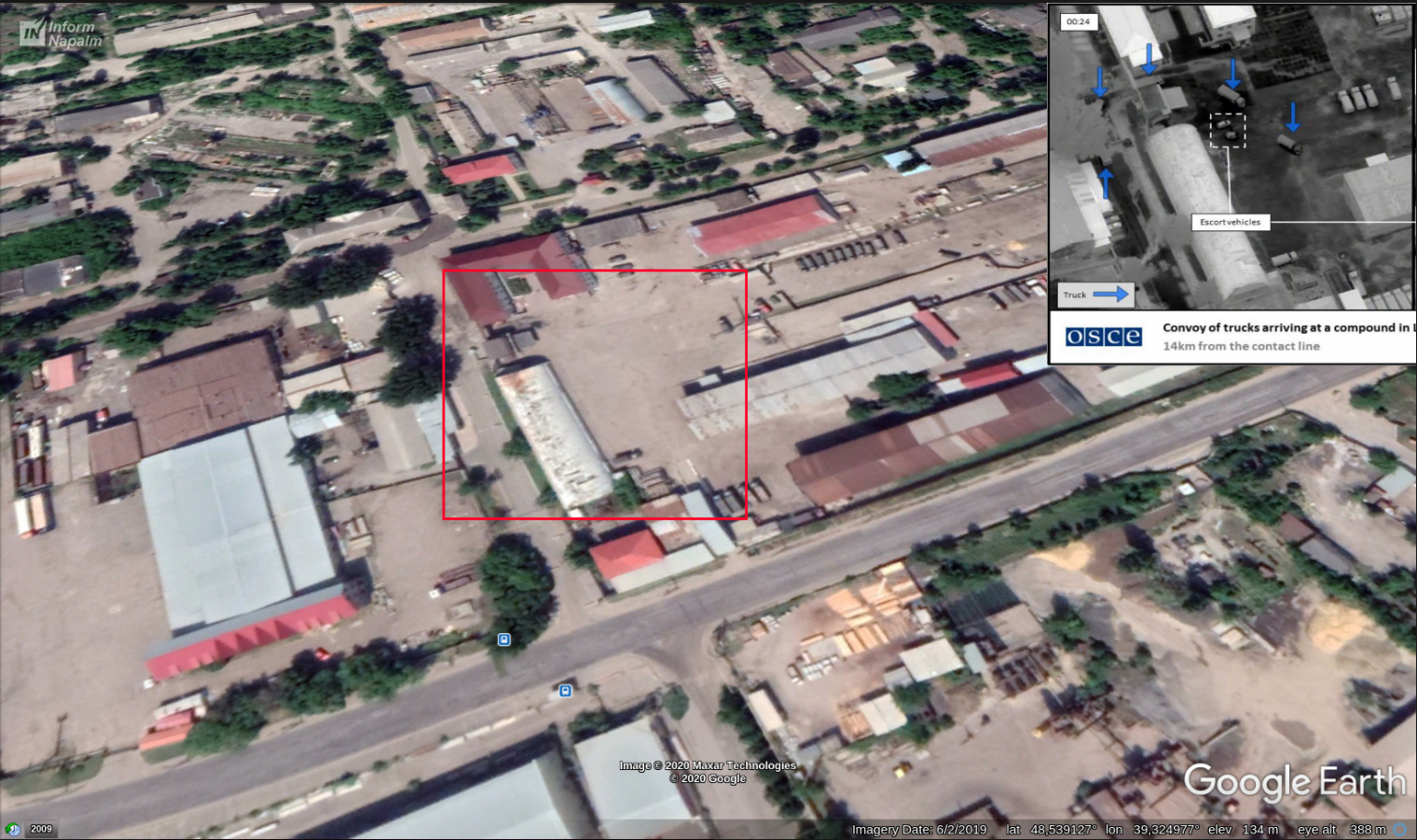 By monitoring open sources, InformNapalm volunteers found that this area has long been used by the Russian occupation forces as a base for the Logistics Battalion of the 2nd Army Corps of the Russian Armed Forces. This is evidenced by the video which was posted by propagandists of the Luhansk People’s Republic (LPR) terrorist organization in 2015. 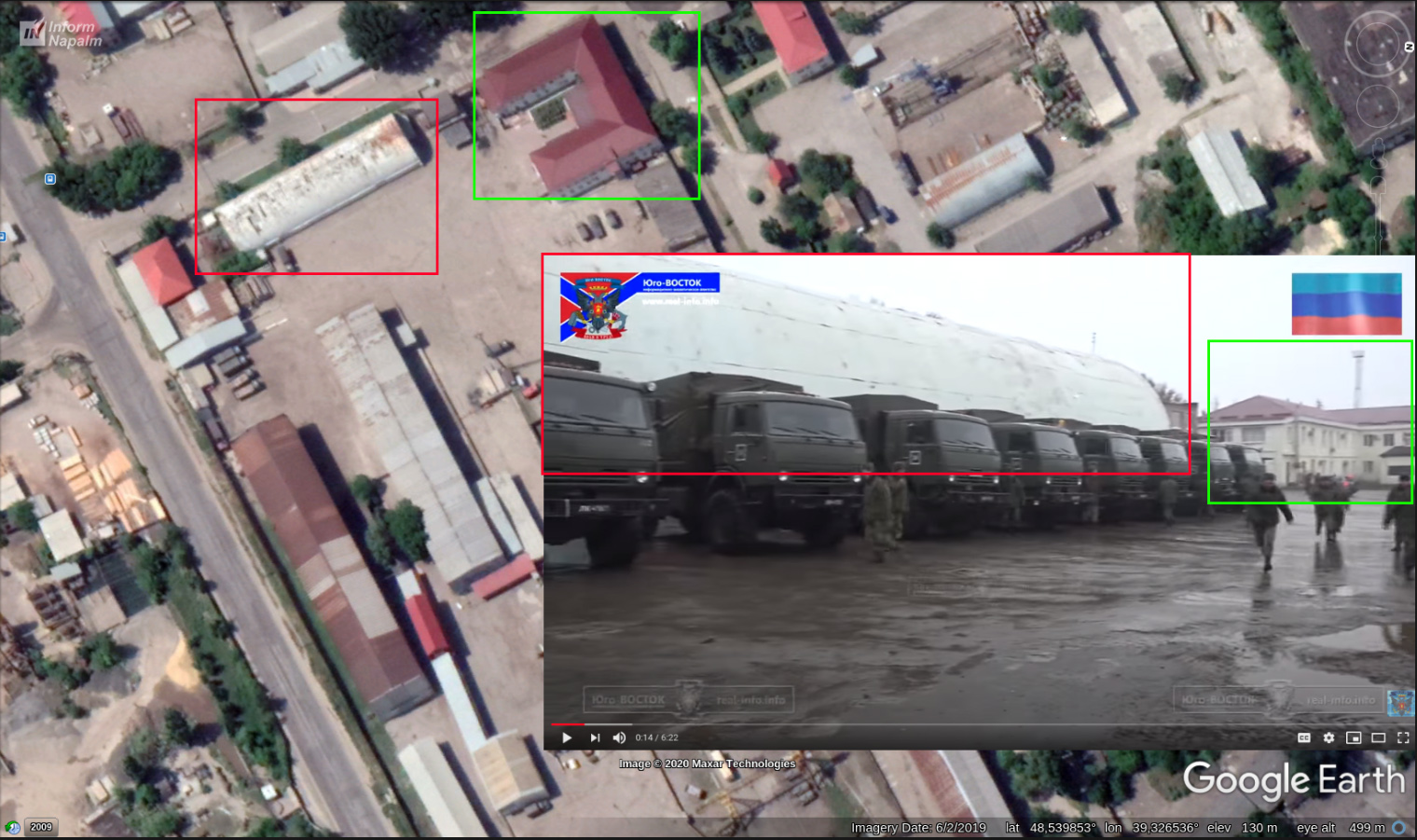 It is worth mentioning that in March 2020, InformNapalm showed a unique aerial photograph that supplemented the text data of the OSCE SMM report No. 60/20 of March 12, 2020 exposing 3 modern Russian electronic warfare systems: RB-341V Leer-3, R-934B Sinitsa and RB-636 Svet-KU. This information was apparently very sensitive for Russia, the aggressor state. Shortly after its publication all official pages of all language versions of InformNapalm were blocked on Twitter for the first time in 6 years. 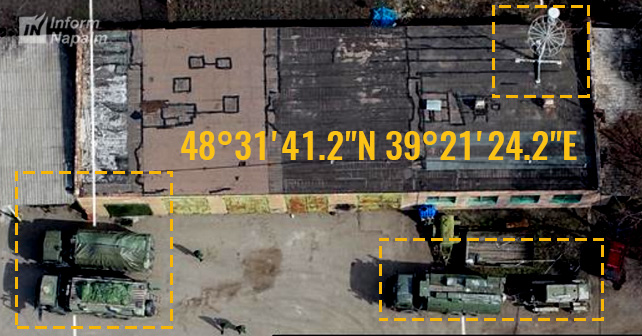 For over 6 years, Russia has been publicly denying its direct participation in the war in the Donbas. However, there is abundant evidence from international observers and volunteers indicating that Russia grossly violates international law throughout the entire period of the military conflict, continues to deploy weapons and military equipment, and uses its own military personnel, as well as mercenaries, mostly citizens of the Russian Federation.

Peaceful settlement of the conflict in the Donbas is impossible without the withdrawal of Russian hybrid armed formations and equipment from the territory of Ukraine: Crimea and parts of Luhansk and Donetsk Oblasts. Therefore, any political speculation regarding the “elections in the Donbas” is fraud and does not contribute to the real end of the war. Given that the Kremlin has not abandoned its aggressive intentions for 6 years, the international community should continue to strengthen its sanctions against the aggressor state and put consistent diplomatic, economic and other types of pressure on the Russian leadership. It is also important to acknowledge that the return of the Ukrainian Crimea occupied by Russia is inextricably linked with the war and the occupation of parts of the Ukrainian Donbas. Therefore these issues should be addressed comprehensively, and sanctions for the continuation of the war and occupation should be stepped up until the occupied territories are completely returned under Ukraine’s control, the destroyed infrastructure of the Donbas is restored and reparations paid by Russia as a country that launched a war against a sovereign independent nation and inflicted significant irreparable losses: deaths and injuries to tens of thousands of people.

We urge the international community to increase the pressure on the aggressor who launched a bloody war in Europe in the 21st century. If Russia is not fully taken to account for its actions, then other European states may become the next victims of the Russian aggression.