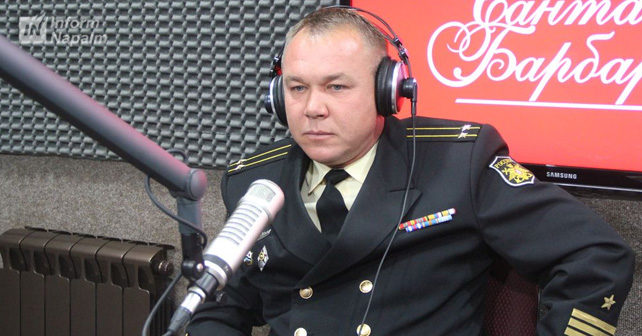 On January 15, volunteers of the InformNapalm international community published evidence of the large landing ship (LLS) Orsk participating in the invasion of Crimea. LLS Orsk belongs to 197th Brigade of Landing Ships BLS of the Russian Black Sea Fleet(military unit 72136). It this feature, we supplement that investigation by the data of the LLS Orsk commander. It was under his command, that the crew of the ship took part in the aggression against Ukraine.

It is important to note that Kuzmin is not yet on the list (1, 2) of the Russian military commanders and Russian officials indicted by the Main Military Prosecutor’s Office of Ukraine. Therefore, we appeal to the relevant authorities of Ukraine and urge them to carry out all the necessary legal proceedings.

Skvortsov graduated from the Popov Radioelectronics Naval College and took the higher special naval officer course in St. Petersburg. He served on the following ships of the Russian Black Sea Fleet: Ochakov, Kerch, Saratov, Orsk. He is currently captain of the 2nd rank.

While monitoring open sources, we found that in an interview in September 2015, to the question about the duration of his service as the officer in command of LLS Orsk, he replied that it had been 2 years. It means that the crew of LLS Orsk was under his command when they participated in the special operation to capture Crimea. In the interview it is also said that Skvortsov was awarded the medal For the Return of Crimea.

In 2017, Skvortsov was tried for extorting money from his subordinates. He was banned by the court decision from holding senior positions in the armed forces and state bodies of Russia.

In the following photo published on June 23, 2019, Skvortsov is pictured next to his relative Vasily Kvyshko and his son Timofey Kvyshko. Both are identified as militants participating in the capture of Ukrainian ships and the headquarters of the Ukrainian Navy during the Russian invasion of Crimea. Both feature on the Myrotvorets Center database.

Ironically, on August 31, 2015, Skvortsov was invited to the TV show called Santa Barbara. During the conversation (archive), the anchor asked him about the Russian navy lagging behind the American one in terms of aircraft carriers. To which the captain of Orsk replied that in the near future Russia would catch up and even overtake the US Navy.

In the comments, readers posted a photo of LLS Orsk, pointing out its age and constant breakdowns. Readers even advised Skvortsov to have mercy on the ship and sink it.

They also criticized the capabilities of Russia: “… why do we need aircraft carriers when we have no carrier-based aviation???? ……. and where will we keep these aircraft carriers???? … we do not have bases for them …….. I am surprised at people repeating the nonsense of Soviet leaders – “we’ll catch up and overtake America”… God help us to gain enough on Africa… And what sense is there in all this catching up and overtaking BS???? Why don’t we just get a normal life, instead of engaging in the bare-ass racing?”

The skepticism of commentators is understandable, as LLS Orsk was launched in 1968. From 2004 to 2017, it moved between shipyards and therefore did not participate in the Syrian Express like other Russian ships. In December 2017, LLS Orsk ventured for the first time in years beyond the Black Sea on a mission to Tartus. The ship delivered military equipment and servicemen to Syria. While passing through the Bosphorus in April 2019, the ship was photographed and the following equipment was identified in the photo: BTR-80 with Pelena-6BK2 electronic systems, KamAZ trucks, a Ural-4230 fuel truck, and Tiger armored vehicles.

However, on January 3, 2020, Turkish blogger Yörük Işık, who spots the passage of ships through the Bosphorus, published a photo of LLS Orsk being towed back through the Bosphorus Strait. One of the two diesels broke down on LLS Orsk, and it was unable to return on its own from the combat mission.

Therefore, 2020 began for the glorious Russian ship with yet another shipyard visit.