How “politically neutral” information can be used: Polsteam, Radio Szczecin and the Russian information war 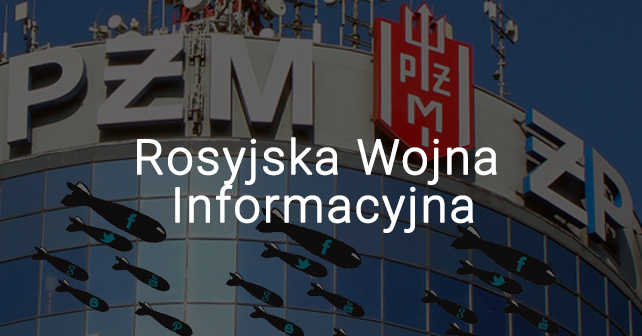 The ship with the name “Lwow” (Polish name of the Ukrainian city of Lviv) was part of the Polish fleet before the Second World War – it was a training sailing ship. Nowadays, Polsteam, the Polish state-owned company, is going to name two out of five recently purchased ships “Lwow” and “Tarnopol” (Polish name of the Ukrainian city of Ternopil. The acting head of the company Pawel Brzezicki believes that this will not cause political disagreements. “This is a politically neutral name also because for many years one of our ships was called “Orleta Lwowskie” (Lviv Eagles). And it did not bother anyone, which means that the name “Lwow” probably will not offend anyone either,” Brzezicki’s words are quoted in one of the publications on Radio Szczecin website.

It is understandable that during the acute phase of the Russian information war and aggression against Ukraine such actions have caused a resonance in Ukrainian media.  Information that Polsteam is going to name ships, recently purchased in China, after Ukrainian cities, was published in Ukraine on January 15 (two days after it was originally presented on the Radio Szczecin website). A Ukrainian internet portal Espresso was one of the first to share the news: 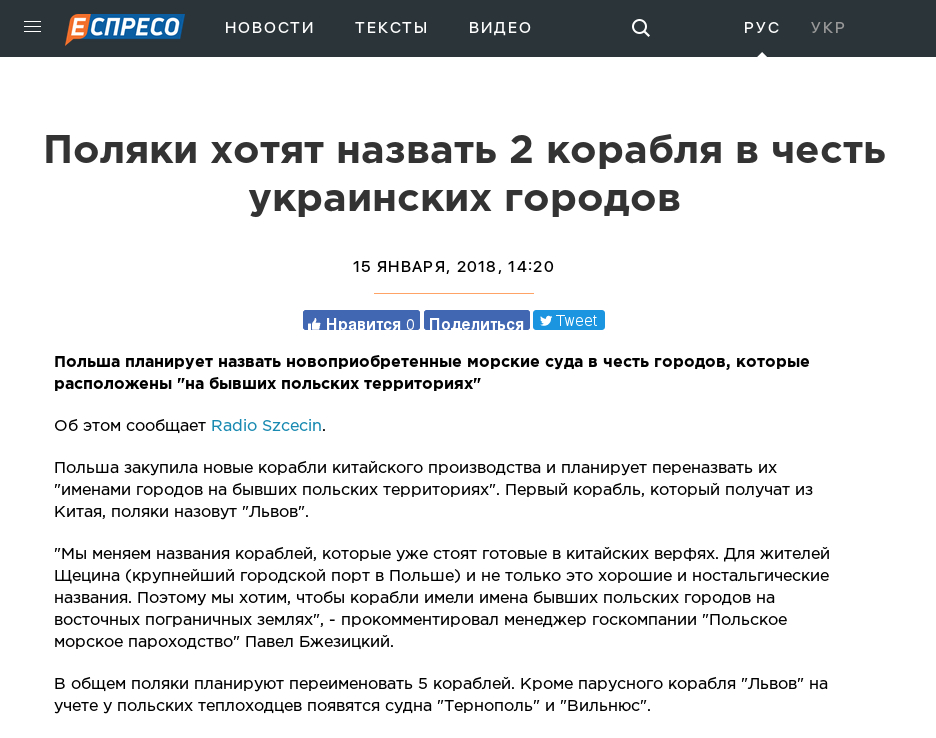 Then it was picked up by other Ukrainian news agencies, including popular media centers that on a regular basis spread useful to the Kremlin information. 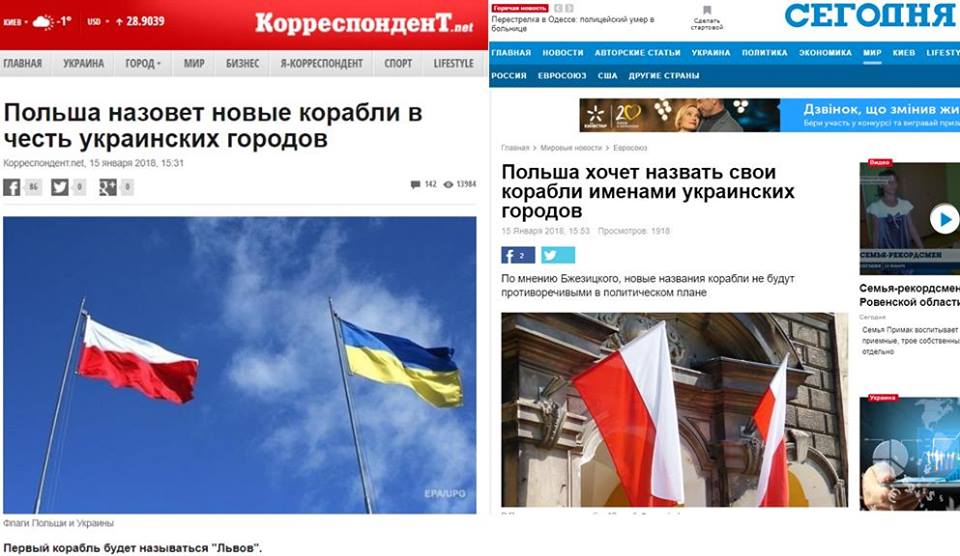 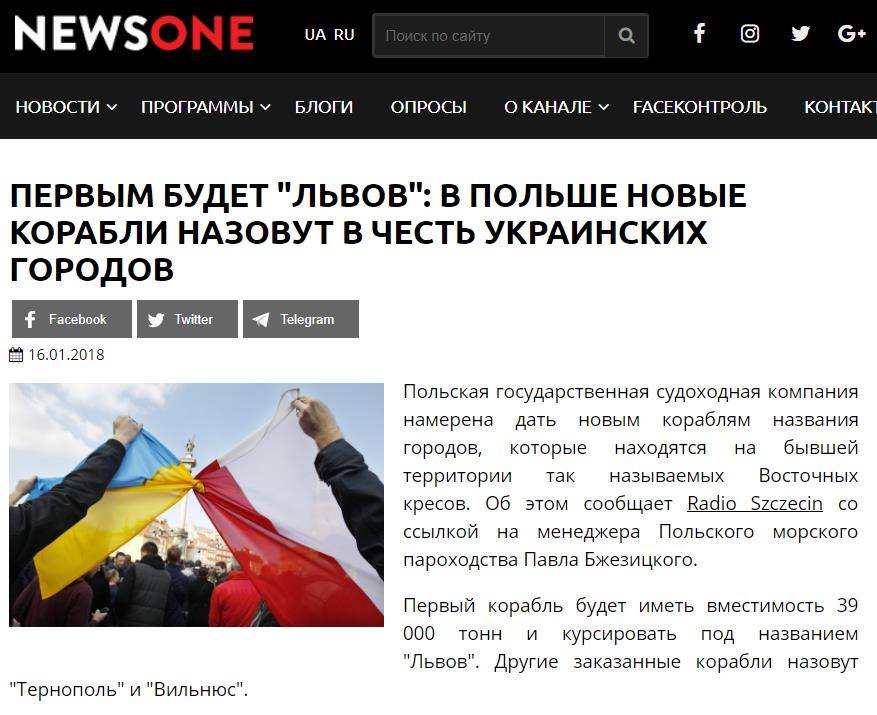 The information about the plans of Polsteam went far to the east. A Russian news agency, referring to the publication of the Radio Szczecin, used Pawel Brzezicki’s words to confirm its own thesis about the growing “sentiment about the lost eastern regions” in Poland.

The publication “Banderovsky’s Fear: Russia and Poland will divide Ukraine along the Zbruch River” by the Russian RIA Novosti new agency suggests the common interests of Poland and Russia, which could be realized through the partition of Ukraine between these two countries. Thus, “the decision that will not cause disagreements” directly helped Russia spread disinformation aimed at the internal consumer.

The thesis on the supposedly common interests of Russia and Poland, as well as the growing sentiment among the Poles across the eastern territories of the Second Rzeczpospolita, was used in an information campaign aimed to convince Russians of the serious aggravation of conflict between Ukraine and Poland. This information also fits into the narrative that Poland and Hungary are increasingly moving away from the European Union and are seeking mutual understanding with Moscow. 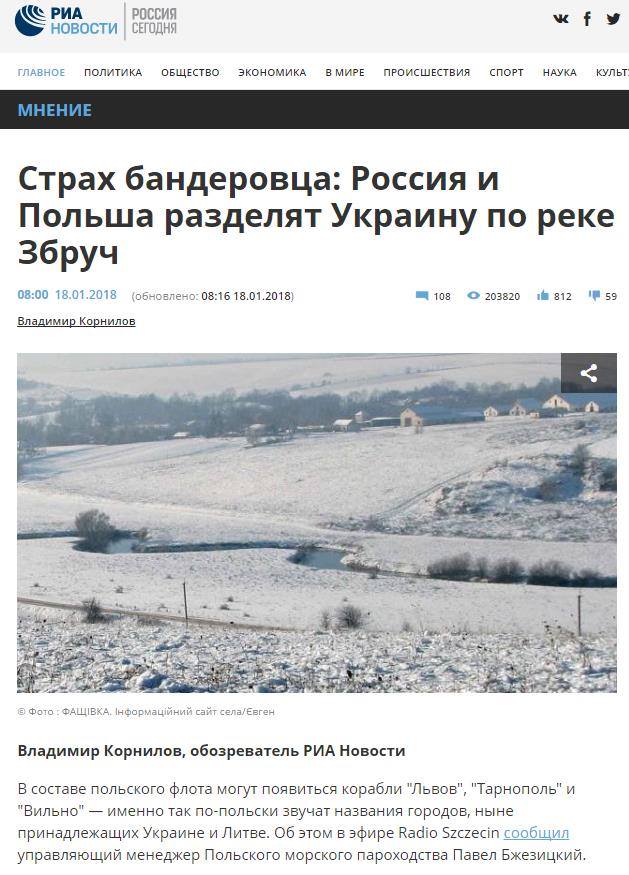 Another message from RIA Novosti appeared on the Polish version of the Sputnik website, a mouthpiece of Russian propaganda in the Polish information space. This publication, designed for the Polish reader, had an eloquent title: “Polish ships scared the Ukrainian nationalists” (Polskie okręty wystraszyły ukraińskich nacjonalistów). It fits perfectly into the campaign of disinformation which should present Ukraine to the Poles as a state embraced by “Bandera nationalism”. 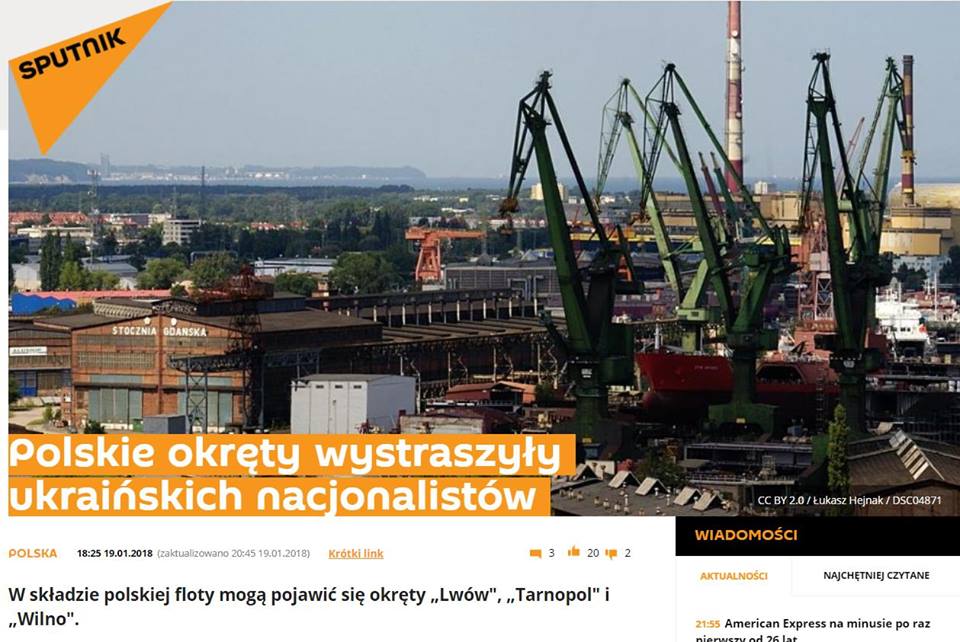 It is important to understand that the nation that has been fighting for four years and has its territories annexed by another country has a completely different level of political sensitivity than citizens of a state living in peace. The Poles should not be surprised that Ukrainians see a potential threat in such actions, that they get worried when the neighboring country, even totally in symbolic meaning, looks at the Ukrainian territories.

Let’s sum up: indeed, such actions as naming Polish ships after Ukrainian cities, even if these cities are inseparably linked to the history of both countries, do not at all strengthen Polish-Ukrainian relationships. Moreover, they are destroying the positive image of Poland in Ukraine and are hitting its image as an ally who understands the threat posed by Moscow.

Such errors, I hope, are caused solely by a lack of empathy and understanding of the Ukrainian socio-political situation, but they can damage the good-neighborly relations between Poland and Ukraine. It should be understood that every such step of the Polish side will be used by Russia to achieve its own goals on the information front, as it happened in this case. The ambiguous statement by Pawel Brzezicki has not only provoked a negative reaction in Ukraine, but was also used within the framework of propaganda campaigns inside Russia to influence Russian readers and beyond its borders as an instrument of influence on Poles and Ukrainians visiting Russian websites.

By Michał Marek exclusively for InformNapalm

No Responses to “How “politically neutral” information can be used: Polsteam, Radio Szczecin and the Russian information war”