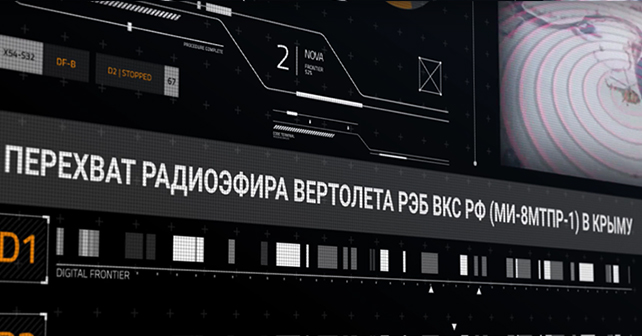 Ukrainian volunteers easily intercept and listen to airband of the Russian secret helicopter hyped as the “jamming super weapon” (video) by the Russian propaganda. The newest electronic warfare (EW) stations of the Russian Air Force which are supposed to penetrate air defense systems as easy as winking could not protect their own radio communications. And this happened in Crimea – right on the territory occupied by Russia and declared as Russia’s stronghold in the Black Sea. From the intercepted communications, Ukrainian volunteers discovered Russian military base sites, callsigns, frequencies, elaborate routes, and the results of EW systems testing.

Volunteers in Ukraine keep helping local intelligence agencies using the best international practices and innovative technologies. Through special intercept receivers they effectively monitor aircraft band. Members of Army SOS group handed over to InformNapalm exclusive proofs of the latest MI8-MTPR-1 prototype EW helicopters being deployed by Russia in occupied Crimea. Their presence was discovered and confirmed in March 2017 during a session attempting to shield the airband frequencies by the helicopter’s onboard tactical electronic protection (EP) system. Before that it had not been possible to confirm the deployment and usage of these helicopters by the Russian Air Force in Crimea.
This exclusive audio recording of the aircraft radio intercept was made by Army SOS volunteer with HackRF One device.

It is important to highlight that MI-8MTPR-1 helicopters are designed to protect fighter bomber air groups and / or army aviation against air defense systems.

In 2016 it was reported that the Russian Ministry of Defense was to get ten MI-8MTPR-1 EW helicopters equipped with Rychag-AV active jamming station. In the opinion of the design engineers, the supply of this helicopter model should substantially increase the ability of the Russian Air Force to conduct breakthrough maneuvers and defeat air defense. According to the information published in 2016 by Milkavkaz.net the first delivery batch of MI-8MTPR-1 helicopters was distributed among the Western and Southern Russian Military Districts which border with Ukraine.

Therefore it is worth bearing in mind the possibility that Russia could use these helicopters in case of an offensive on Ukraine from Crimean foothold.

For 3 years in a row Ukrainian citizens from all walks of life help the Armed Forces of Ukraine withstand the Russian military aggression and bring its equipment to a new level in order to effectively contain the enemy.

One of the many activities carried out by Army SOS group of civilian volunteers is to supply Ukrainian signal intelligence (SIGINT) units with new EW and intelligence devices. 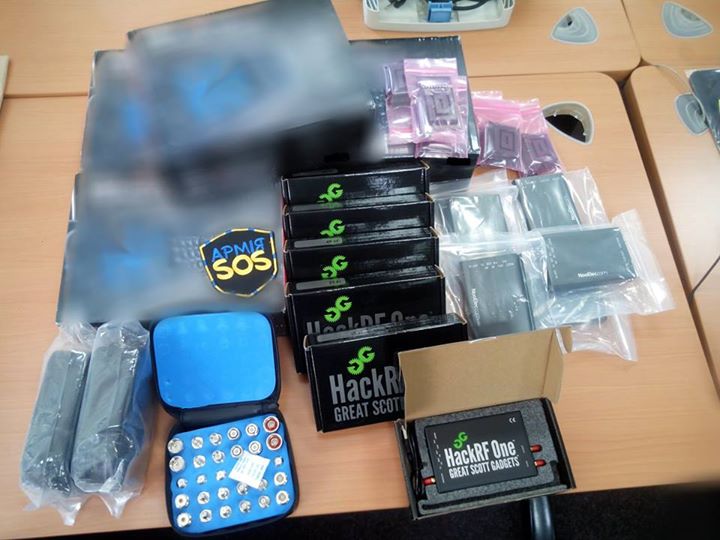 It is remarkable that radio communication of the latest Russian EW helicopter was intercepted by a civilian volunteer with ordinary HackRF One device that can be purchased in a regular online store for a price of a mid-range smartphone. This device is a major upgrade of a famous Chinese dongle with an RTL chipset that is well-known to amateur radio community. HackRF One allows to scan the broad range of frequencies and detect radio signals. Moreover, unlike the systems developed in Russian secret military labs, the device software is open-source and has open architecture.

While Ukrainian government agencies are bogged in red tape, outdated management practices and slow decision-making, volunteers put to work the advanced technology, crowdfund and purchase new systems and devices that can be qualified as non-lethal weapons and equipment.
Volunteers raise donations and, more importantly, invite others to try hand at radio hunt nailing down Russian aggressors. If this radio monitoring initiative goes viral, Russia will not be able to keep its invasion plans secret. Only by consolidated effort and by using innovative high-tech approaches the aggressor can be vanquished and occupied parts of Ukraine liberated.

Also read Who bombs civilians in Syria: profiles of 116 RuAF officers (Infographics) (Russian propaganda calls these data “secret” while InformNapalm gathered this information and shares it for free).

Instead of an afterword

In April Russian jingo circles had to digest several disappointing news debunking some Russian propagandistic myths of the might and unparalleled high-tech abilities of the Russian Army.

Precision strike by the U.S. Navy that hit Shayrat Air Base with Tomahawk missiles on April, 4 and, literally, burned the planes in aircraft shelters demonstrated that Russian S-400 air defense system could not protect Russia’s ally forces of Bashar al-Assad in Syria. Now the latest MI-8MTPR-1 electronic warfare helicopter could not protect its secure radio communications during the training flights over the Tarkhankut Cape in occupied Crimea. These are good examples of how superiority complex, overweening ambition, and confidence of being able to infinitely deceive others crumble against the hard reality.

(CC BY 4.0) By Roman Burko and Mykhaylo Kuznetsov.Translated by Christina Dobrovolska, edited by Artem Velichko

Information was specially prepared for InformNapalm.org, an active link to the authors and our project is obligatory for any reprint or further use of the material. Be the first to read our new investigations. Follow InformNapalm on Facebook and Twitter!