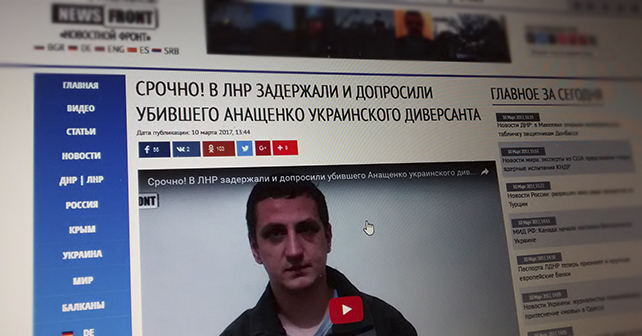 On March 6-9, 2017 the International Court of Justice in The Hague held hearings on Ukraine’s case against Russia for intervening militarily in Ukraine, financing acts of terrorism, and violating the human rights of millions of Ukraine’s citizens.

After having realized Russia’s dire position in court due to the overwhelming evidence refuting all core arguments of the Russian side, Russian propagandists chose to resort to the proven methods of information warfare.

On March 10 we witnessed a new round of the first stage of a large-scale Russian information provocation with the aim to accuse Ukraine of terrorism by using the captured POWs as puppets. 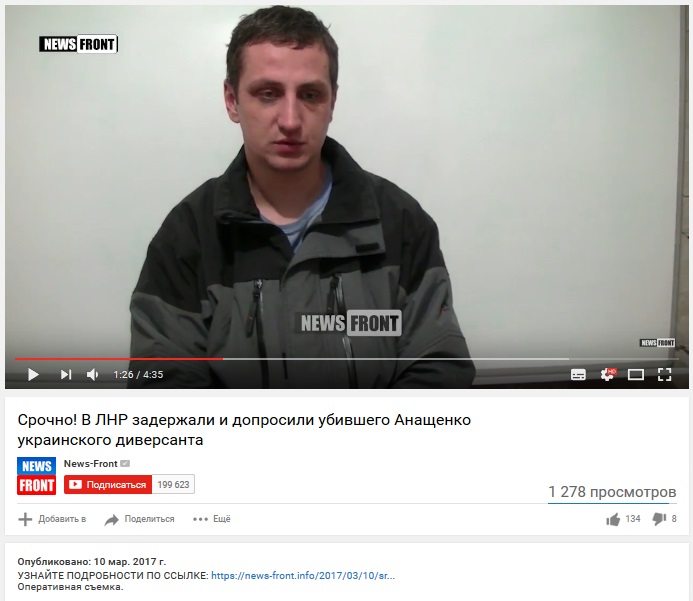 The agency released what they called “an operational footage of Ukrainian saboteur interrogation”. In this video the person who introduces himself as a Major of the Armed Forces of Ukraine Serhii Ivanchuk says he was personally responsible for the elimination of the self-appointed head of the so-called People’s Militia of LPR Col. Oleg Anashchenko.

To carry out their provocation Russian intelligence, most likely, used Ukrainian military servicemen captured in mid-February. Ukrayinska Pravda reported that on February 11 several Ukrainian servicemen stationed at the front line in Luhansk Oblast went missing and the contact with them was lost.

Remarkably, Anashchenko was killed in a car bombing attack in Luhansk on February 4, 2017 – that is more than a month ago, but the video was released only yesterday. His death was also associated with Plotnitsky’s revenge for his possible participation in preparation of a military coup in Luhansk. Overwhelming majority of militants and pro-Russian bloggers do not believe that Ukrainian intelligence or security services could be behind this attack. On the contrary, the elimination of Anashchenko perfectly fits into the general trend of recent murders in the best KGB style inherited by Russian special services.

Nonetheless, the most important message of the video with the captured officer (published only now, on March 10) is not the admission of guilt for the elimination of Anashchenko, but the statement that Ukrainian Special Forces are preparing to carry out terrorist attacks not only on non-government held territories of Ukraine, but even in Belgorod Oblast of Russia. It was the fashion in which Russian propagandists fulfilled the Kremlin’s task to accuse Ukrainians of terrorism against Russians.

So far there has not been reported any incident that could be attributed to Ukraine’s subversive operations in Belgorod or any other Russian city. Yet, if we trace the history of Russian information operations we can expect any cynical provocation from Russia in the future. The series of apartment bombings in Russian cities of Buynaksk, Moscow and Volgodonsk that took place on September 4-16, 1999 already demonstrated that in order to justify the full-scale war in Chechnya and boost Putin’s rating Russian security services were ready to sacrifice hundreds of Russian citizens.

Now, when the threat of the Hague Court ruling against Russia and its top officials became unavoidable, the Kremlin may opt for terrorist attacks on Russian territory seeking to blame them on Ukraine and, thus, justify further invasion and escalation of Russo-Ukrainian war.

This incident needs special attention of the international community to prevent Russian information manipulations backed by the intentions that can be easily discerned against the backdrop of the Hague Court trial.

Prepared for publication by Andrew Lysytskiy, translated by Christina Dobrovolska