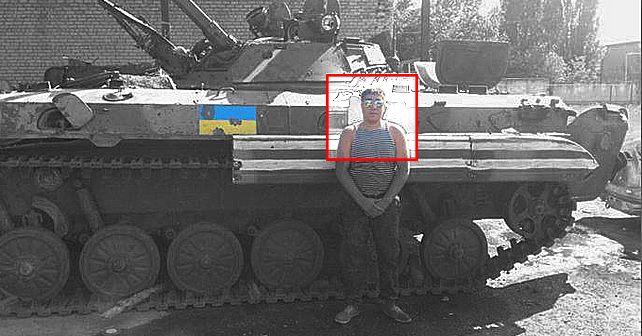 InformNapalm volunteer intelligence community continues to collect, study, and publish the facts of the participation of Russian military men in the hostilities in Ukraine. This piece will be of interest to those who collect facts of recent history trying to see the real picture of the war in eastern Ukraine, despite the flow of Kremlin propaganda. 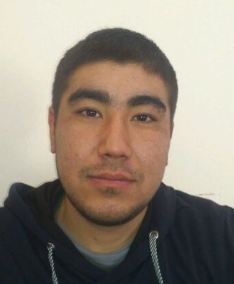 The object of today’s publication – Damir Selikhanov (archived social media profiles on  OK and VK , dedicated “personal” page on Myrotvorets web site), an active Russian serviceman of the 8th Motorized Rifle Brigade (MRB), military unit No. 16544 of the 58th Army of the South Russian Federation, permanent station in the town of Borzoi, Chechnya.

Some of his awards from 2013 with visible name and military unit number. 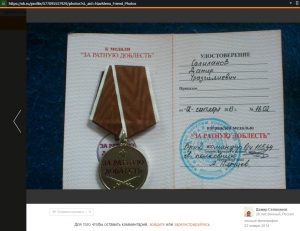 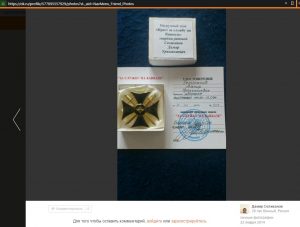 On the photo, posted on social media on October 1, 2014, Selikhanov poses against the background of the Ukrainian BMP-2 infantry mobility vehicle in the industrial zone (map coordinates  48.3355253, 39.7013578) of the Ukrainian town of Sukhodilsk, in the borderline area with Russia. 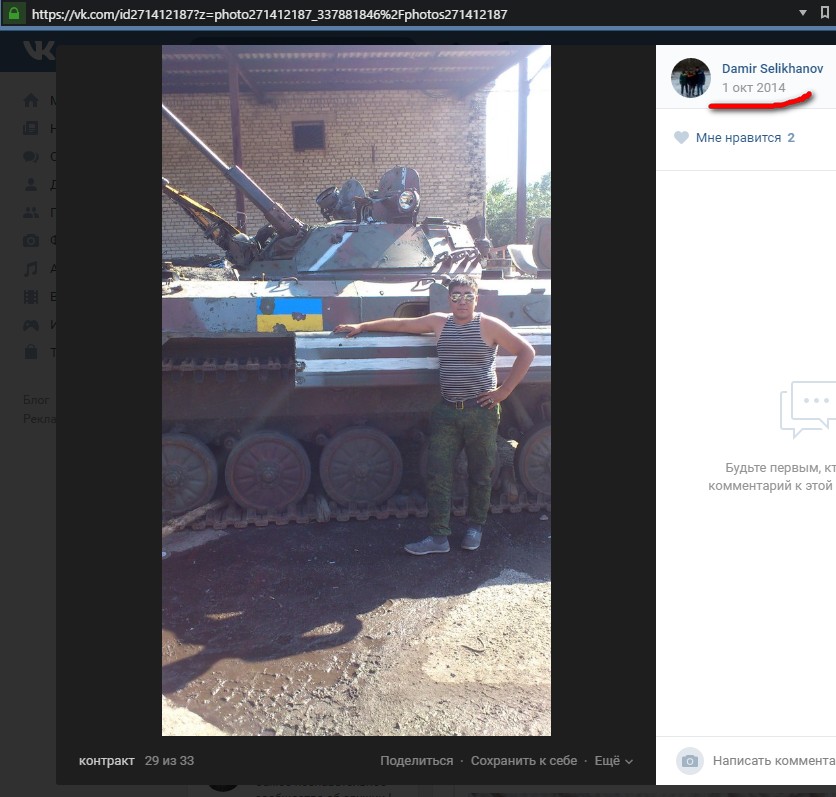 As early as December 2014, the Twitter user Askai noticed this photo of Selikhanov, and recorded him as a participant of hostilities in Ukraine.

But this BMP-2 could have been taken to the territory of the Russian Federation, and photographed somewhere there (there are known cases of this kind, e.g. see Looted BRDM Ukrop gave away Russian Marines).

To clear any doubts about the exact location of the photo, we have georeferenced the image and determined approximate time when the photo could have been taken.

We took the photos with the damaged Ukrainian BMP-2 from the archives used in our article titled Path of Russian 8th Brigade: from Departure to Donbas to Rewards for War Crimes. 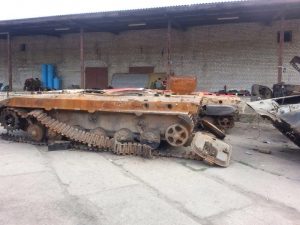 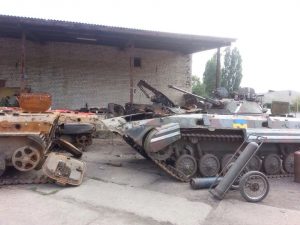 We took a satellite image dated August 31, 2014 with the clearly visible damaged military equipment standing nearby as the reference for our comparison.

On the satellite image of August 8, 2014, only one unit of damaged equipment is visible.

Selikhanov posted the photo with the BMP-2 at this location on October 1, 2014, which means that the photo in question was made between August 9 and October 1, 2014. The foliage on the trees and warm weather allowing Selikhanov to pose in a t-shirt, corroborate our assumption.

In the related article on the 8th MRB, we used photographs of Aleksandr Arkusha, another contract soldier from Russia, also dated October 2014. The above-mentioned industrial zone is located just under 2.5 km from the monument in Sukhodilsk, against which the servicemen of the 8th MRB were photographed.

In Selikhanov’s photo album, there is also a photo dated October 2, 2014, where he and 18 other Russian servicemen are posing against the background of equipment from military unit 16544. Askai also proved that the equipment belonged to the 8th MRB, having noted the painted-over tactical markings of this unit (a bold dot inside a square). 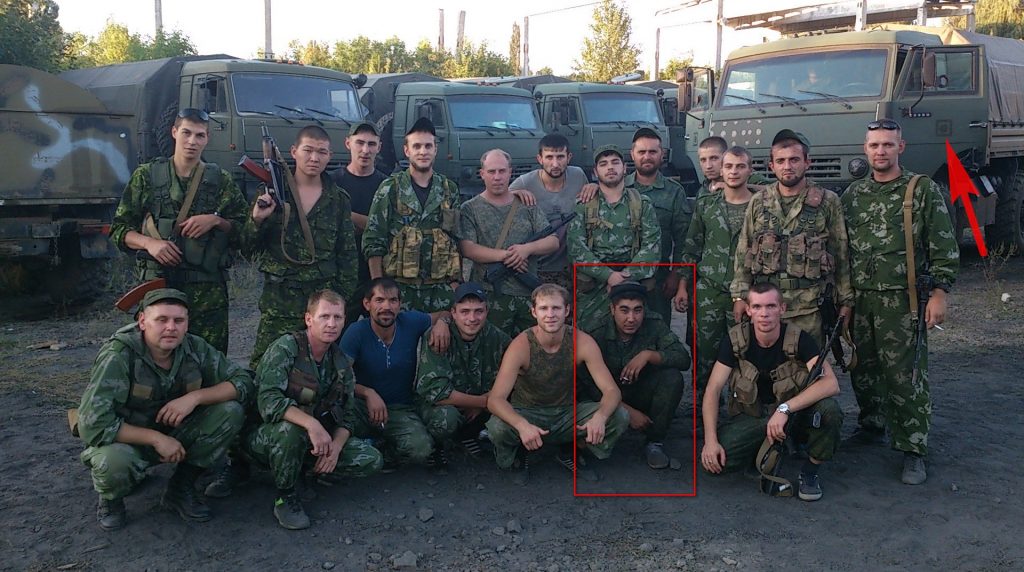 This place is located less than one kilometer away from the above-mentioned monument.

Behind the KamAZ trucks in the photo, there is a destroyed industrial building, of which only a skeleton remains. And on the satellite image, the military trucks are parked the same pattern as on the photograph. Location – 48.3555379, 39.7315916.

In the photo, marked with green arrows, there is more military equipment which did not fit in the photo.

Let us consider the photo of Alexander Arkusha posted on VK social network on November 20, 2014. It features him and other servicemen of the 8th MRB in a windbreak. 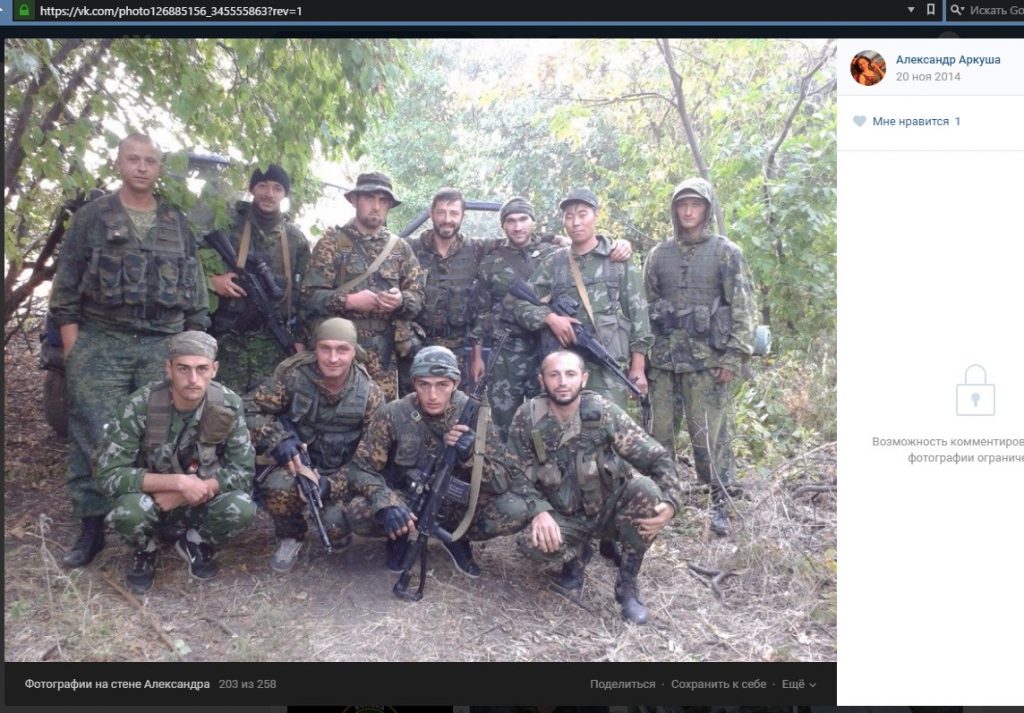 More about the geolocation

In the satellite image of July 13, 2014, everything is normal: green fields and windbreaks, straight field roads.

But on the image of August 31, 2014, there are obvious changes: military equipment tracks in the fields, more tracks near and inside the windbreaks along the road. The equipment is ever-present in the area. There are also Russian servicemen hiding in the trees.

This place was not chosen by chance: there’s a water source within 500 m – a pumping station near a small reservoir and an irrigation canal for the nearby fields. Also not far (1.5 and 2.5 km) there are small settlements Ohulchansk and the Vodotok.

For clarity, the identified places are marked on the map.

Note that the spot in the windbreak is located 10 km from the village of Novosvitlivka, and the photograph is connected with the events of late summer and early fall of 2014, which corresponds to the period of Russian shelling of Novosvitlivka.

Thus, we accurately and clearly determined the place of illegal foray of Russian regular troops into the territory of Ukraine. Such identification of actual locations is necessary to bring to justice all those who participated in the aggression against Ukraine, from a single Russian soldier to entire units of the Russian Army involved in the war crimes committed in Ukraine.

(CC BY) An active link to the authors and our project InformNapalm.org is obligatory for any reprint or further use of the material.