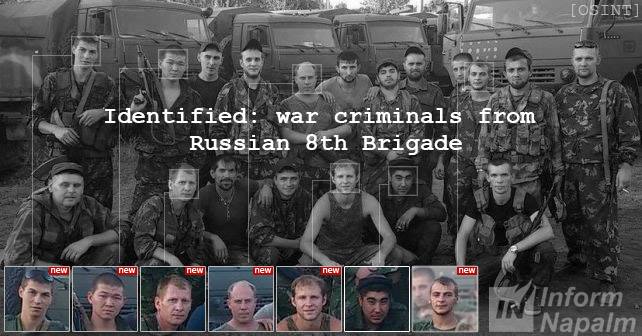 We have identified war criminals from a special forces battalion of the Russian 8th Mountain Motorized Rifle Brigade (the 8th MMRB) who participated in the first wave of the Russian aggression.

For three years now, Russia has been fighting an undeclared despicable war against Ukraine. InformNapalm community, along with other volunteers groups, has done a tremendous job identifying and publicizing facts of the Russian aggression. Our investigations are based on conclusive evidence. Hundreds of Russian Army servicemen – officers, contract soldiers and conscripts – have already been identified, and this work continues. Our goal is to identify each participant of this dishonest war, whatever it takes. Sometimes it takes several days to find and identify yet another “invisible soldier”, analyzing hundreds pages and links and putting together bits and pieces of information. But the efforts are well worth it because each revealed fact wreaks havoc on reputation of the aggressor that sooner or later will pay for everything. We are confident that the collected evidence base will be used by international investigative and judicial bodies, and the Russian military and political leadership will have to answer for their crimes.

The new InformNapalm OSINT investigation is based on the picture which may look familiar to many of our readers. The presented picture of Russian servicemen from the 8th MMRB was first published in autumn 2014 (see slide # 8). Later, it was picked up by several media and bloggers. After that, in February 2017, volunteer investigators were able to identify the place where the photo was taken – the vicinity of Sukhodilsk, Luhansk Oblast, Ukraine, and identified one of the 19 servicemen – Damir Salikhanov.

Now we have identified six more invaders: two officers and four enlisted contract servicemen who in August – September 2014 fought in the Ukrainian Donbas with so-called Special Forces Battalion of the 8th MMRB.

Note: In 2014, almost in each unit of the Southern Military District (SMB, Russian Army) there were so-called national units – Special Forces battalions manned by contract soldiers with combat experience, including the locals from the North Caucasus (sometimes – amnestied militants). Such battalion was in the 8th MMRB, too. Read more in the early InformNapalm investigation published in August 2014: National Battalions from the Southern Military District fighting in Ukraine. 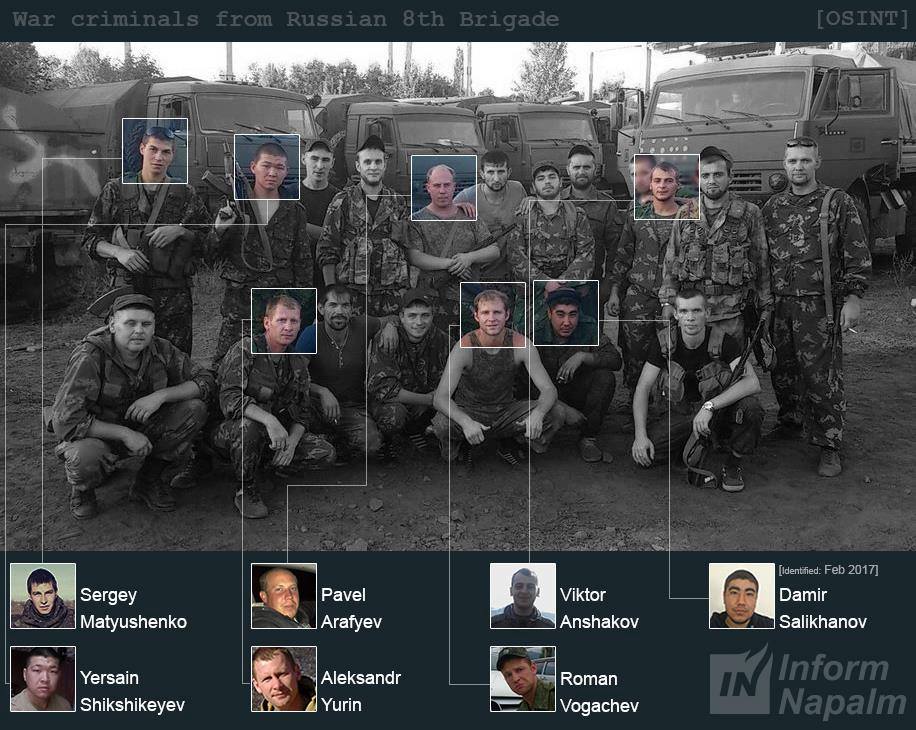 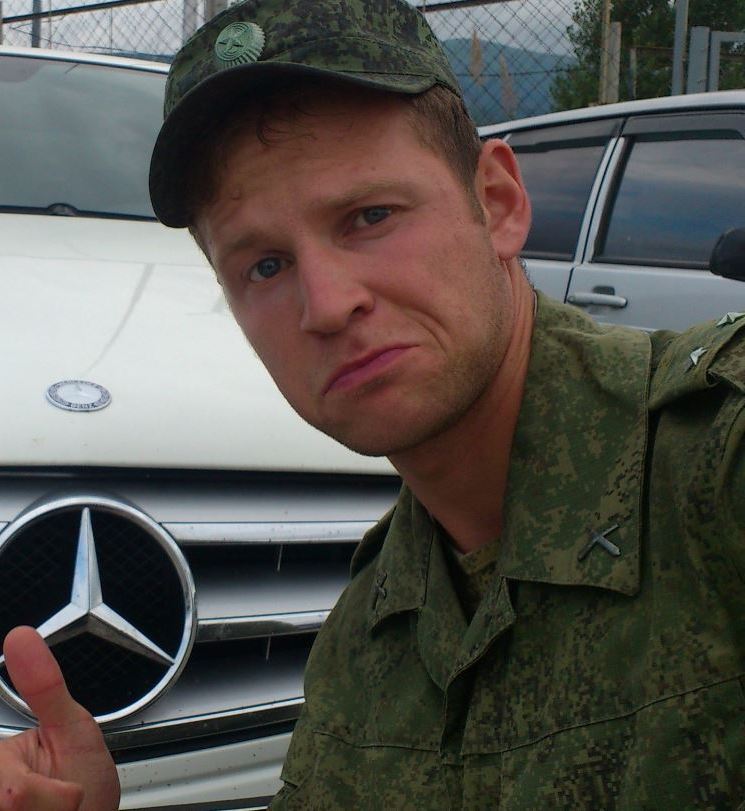 Born on October 22, 1989. Native of the town of Beloretsk, Republic of Bashkortostan, Russia, registered at address: 57, Krupskoy Street, Apt. 3, Beloretsk.

As of 2015 : he was an officer of the 8th MMRB in the rank of first lieutenant. He graduated from Yekaterinburg Higher Artillery Command School in 2012.

His social media account: VK (archives of his profile, photo album, and friends).

It is noteworthy that R. Vogachev was described by volunteers from Lostivan project about two years ago. Unfortunately, that project ceased to exist, and the original record is lost. However, the data about this Russian officer was copied to gruz200 project page and it says the  following: “[He is] an Imperial Nazi from the Russian Army. According to geodata obtained from the picture, one can conclude that he was in Sukhodilsk, Luhansk Oblast.” 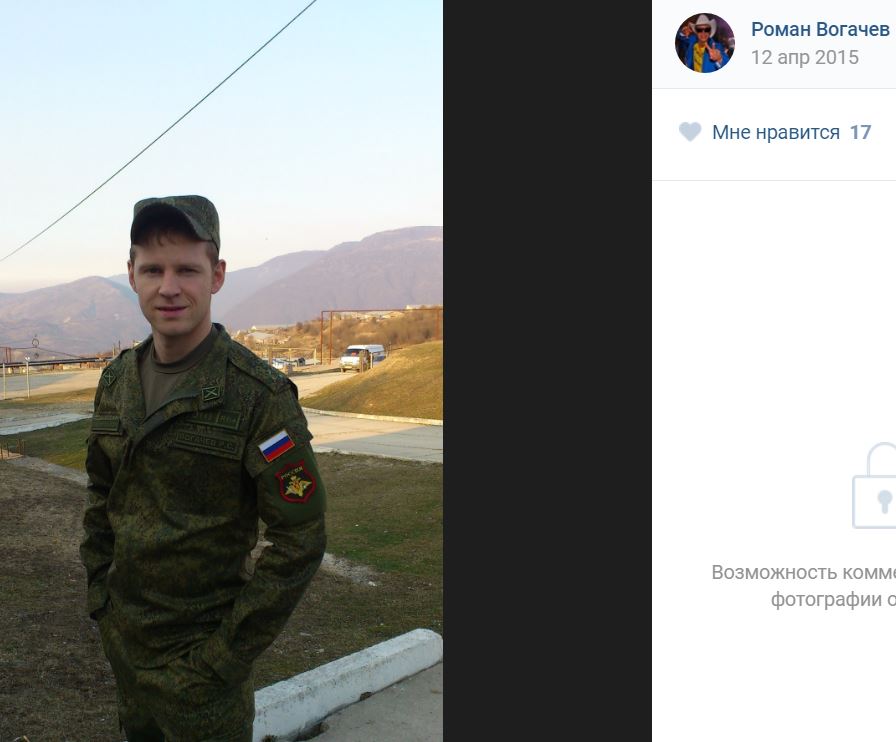 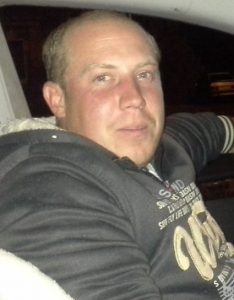 Born on June, 13, 1987. Native of the city of Penza (according to other sources, of the town of Teykovo, Ivanovo Oblast).

As of 2016 he was an officer of the 8th MMRB in the rank of captain. He is a graduate of Kolomna Artillery Command College.

His social media accounts: VK (archives of his profile and photo album) and OK (archives of the profile, album and friends). These accounts have been inactive since 2013. 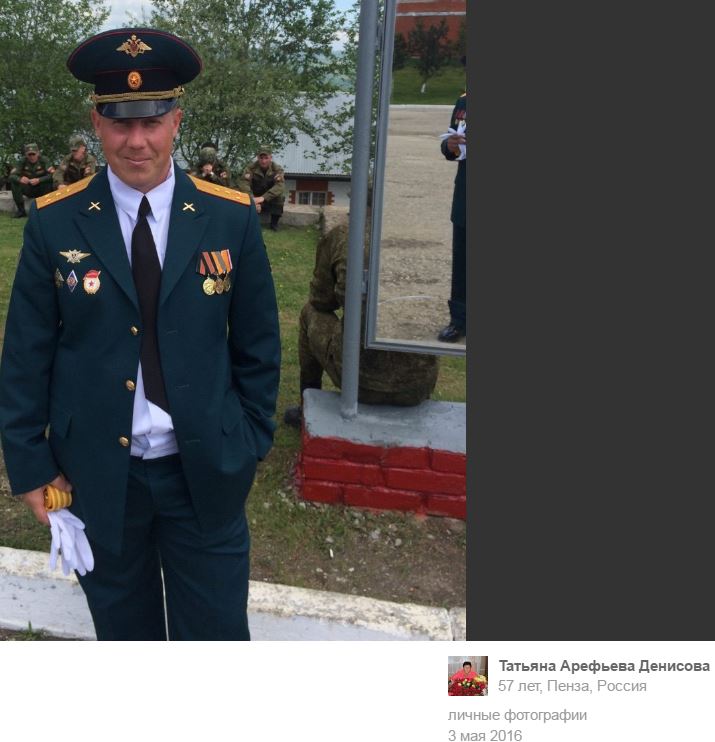 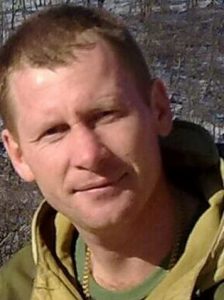 His social media account: OK (archives of the profile, photo album, and friends). 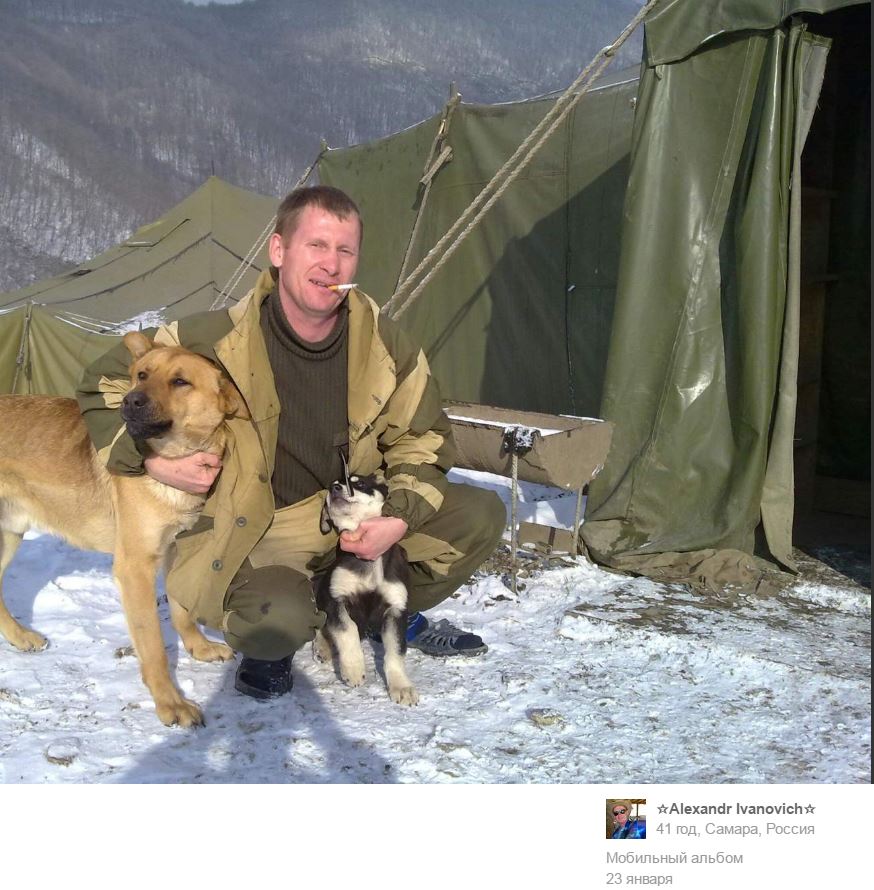 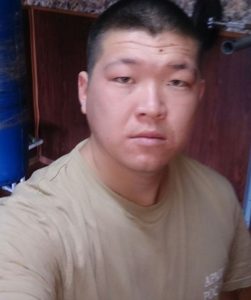 His social network accounts: VK  (archives of his profile, photo album, and friends) and OK. 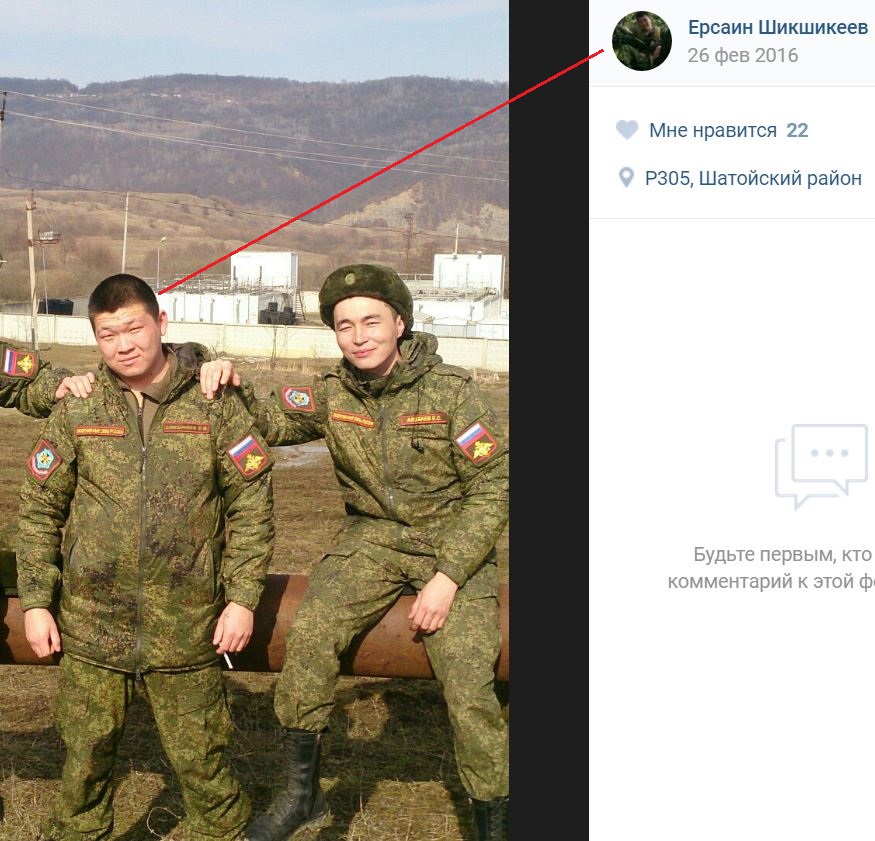 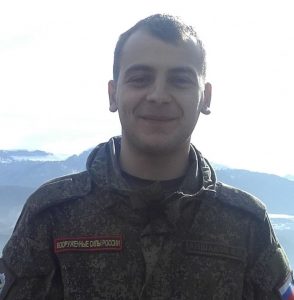 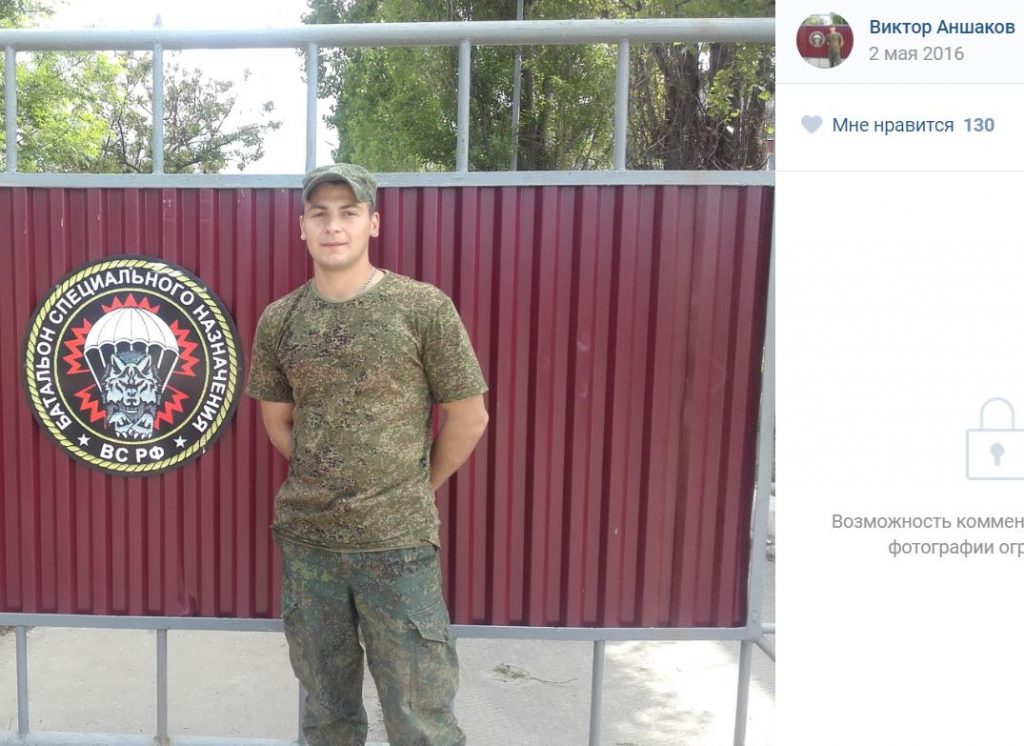 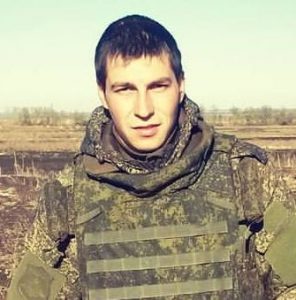 Born in 1994. He is native of Kamyshin, Volgograd Oblast. 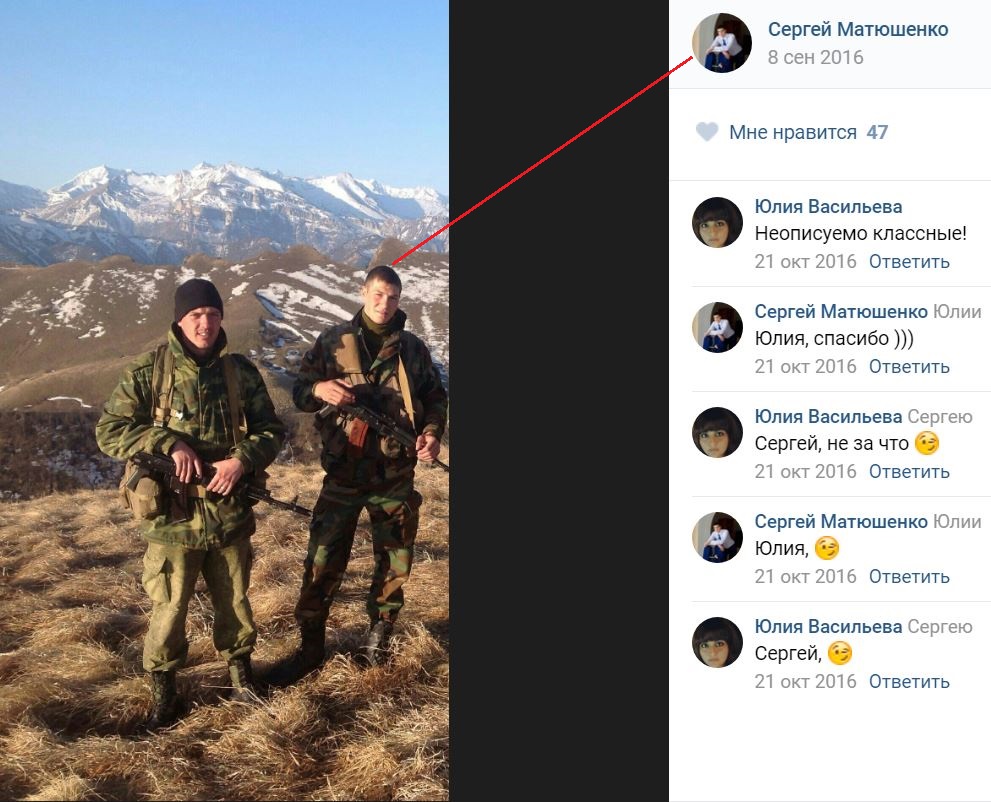 As for now, some motorized rifle brigades of the Southern Military District are being reorganized. Particularly, some brigades stationed in Chechnya, are being transformed into regiments of the 42nd Motorized Rifle Division which is currently going through the restoration process (see more in the InformNapalm publication from April 8, 2017). Along with the 17th and 18th Separate Motorized Rifle Brigades, the 8th MMRB is also being reorginized into a new, 291st Motorized Regiment, military unit 65384 with same home base in the village of Borzoy.

Taking into account previously identified D. Salikhanov, so far we have established the names of seven war criminals out of 19. Identification of others is in progress. It’s worth reminding that this is not the first time when Russian aggressors who fought in the Donbas, are recognized on group photos. The same way scouts from the 18th Separate Motorized Rifle Brigade (SMRB), artillerymen and scouts from the 7th Military Base, tankmen and scouts from the 17th SMRB, and tankmen from the 74th SMRB were identified. And this is only a small part of invaders identified by InformNapalm OSINT investigators.

The 8th Mountain Motorized Rifle Brigade was mentioned many times in InformNapalm publications in the context of Ukraine deployments:

This publication is based on the OSINT investigation of InformNapalm international volunteer community.