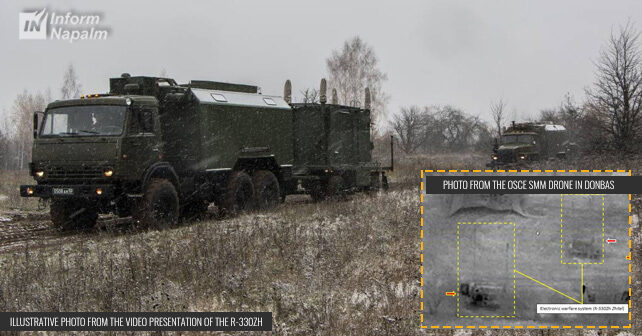 The Russian R-330Zh Zhitel electronic warfare system has been repeatedly spotted in the occupied part of the Ukrainian Donbas. It periodically featured both in the OSCE SMM reports and in the photographs that InformNapalm volunteer intelligence community published in the course of their OSINT investigations. This system entered service with the Russian army in 2008, and the Russian Federation has been actively deploying it throughout the entire war in eastern Ukraine, starting at least since 2015. This article provides new details, as well as the time line of the identification and sightings of this system in the Donbas.

The R-330Zh Zhitel system was spotted once again on the night of November 28, 2020 by a long-range OSCE SMM drone, 4 km north-west of the village of Kovske, Novoazovsk raion of Donetsk Oblast of Ukraine, about 5 km from the border with the Russian Federation. The OSCE SMM reported this in its report No. 286/2020 issued on December 1, 2020.

InformNapalm volunteer intelligence community has received visual confirmation of this report. Today we are making public this exclusive data. Here are the approximate coordinates of the location where Russian R-330Zh Zhitel was spotted again: 47°15’14.5″N 38°11’03.4″E. 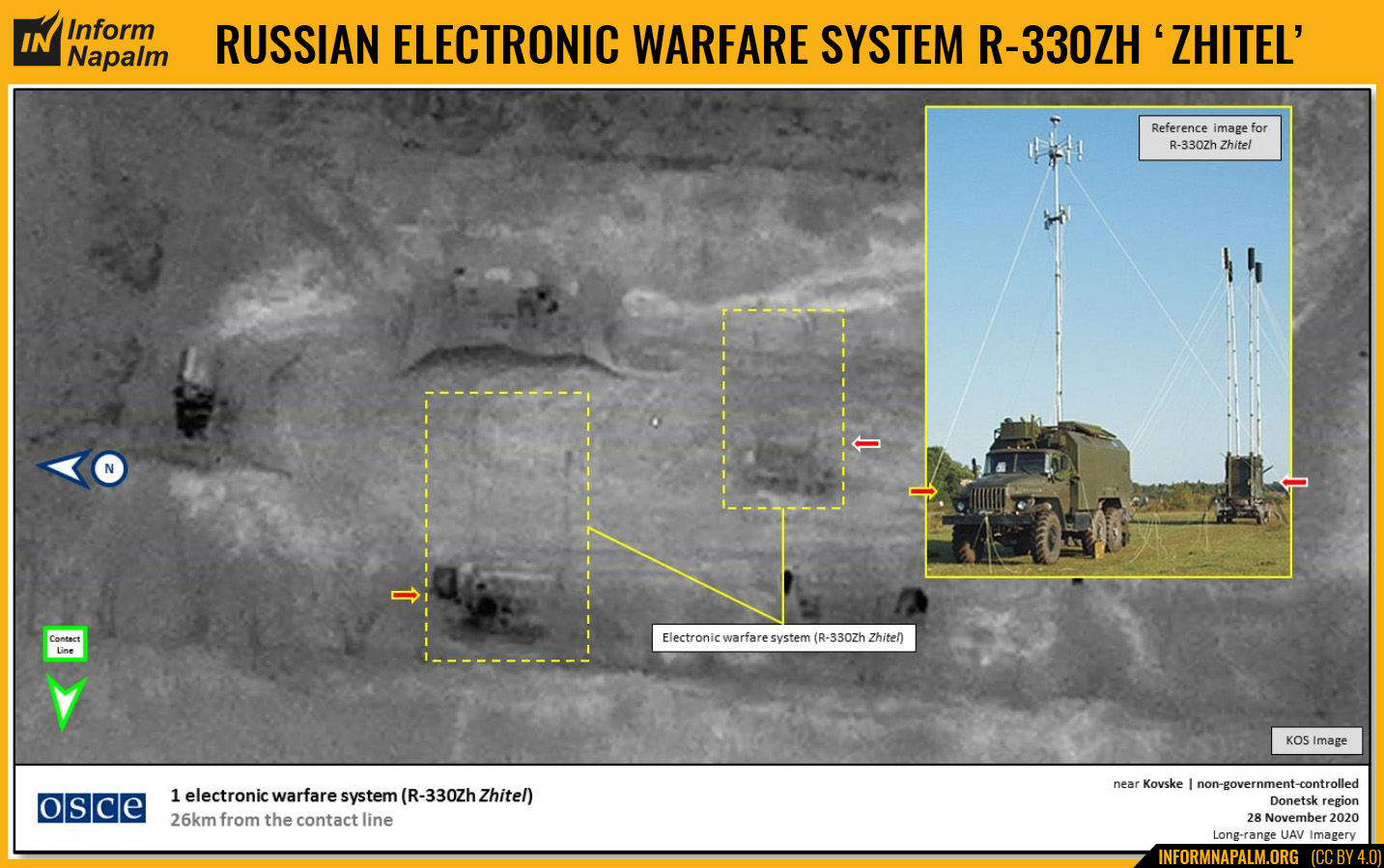 Although the quality of the night image is rather low, the photo clearly reveals the characteristic visual features of the R-330Zh Zhitel system.

Also, the R-330Zh Zhitel and other Russian electronic warfare systems were spotted in the occupied part of the Donbas by an OSCE SMM drone in early 2020, on February 16. 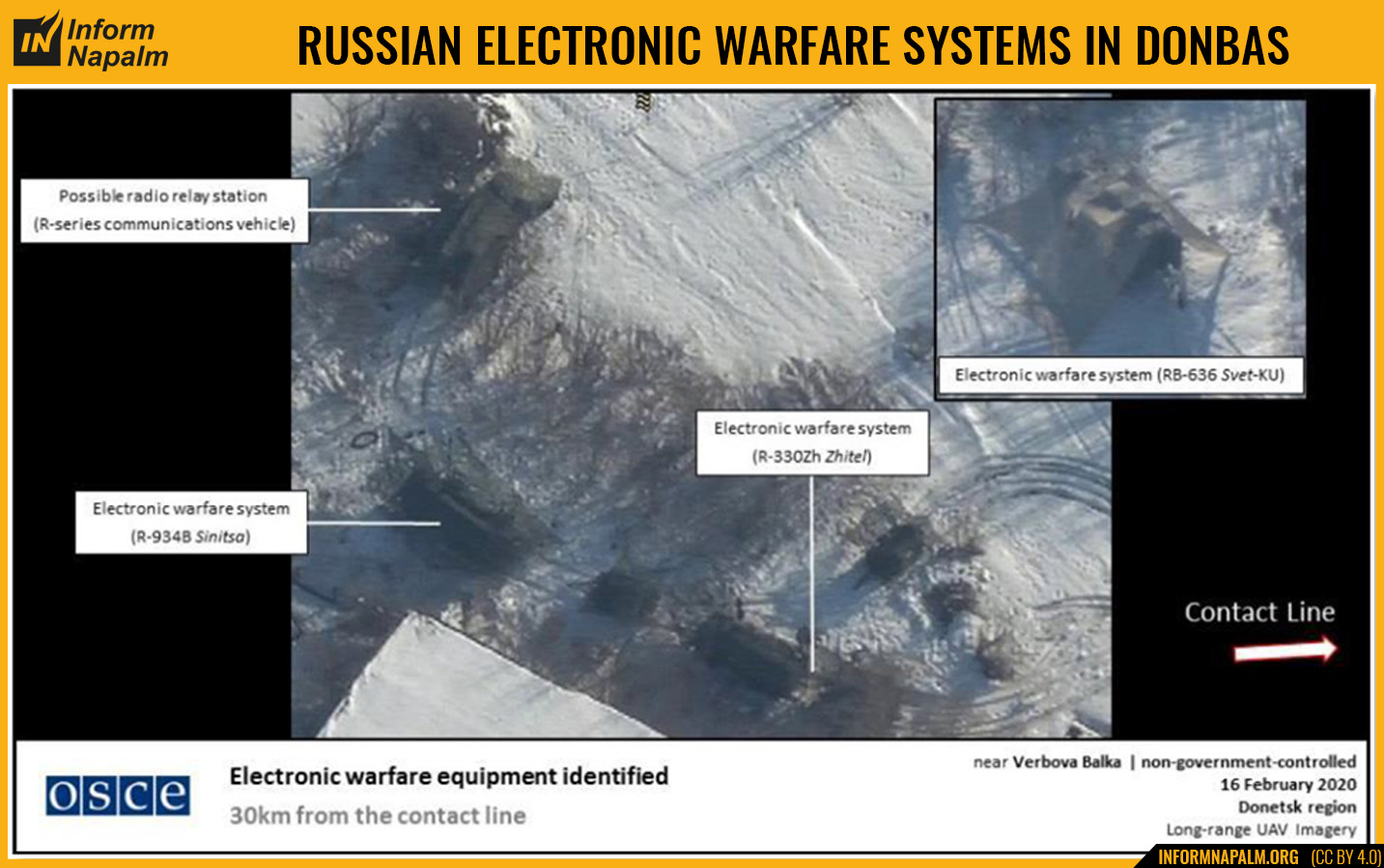 For the first time, the Russian electronic warfare R-330Zh Zhitel system was spotted in the Ukrainian Donbas in June 2015 – it was identified in the background of a photograph posted on social media by a collaborator of the Russian occupation forces from Vostok 11th Separate Motorized Rifle Regiment (military unit 08818). It was possible to determine the coordinates of the footage location: 48°05’18.8″N 37°54’30.2″E (the city of Makiivka, Donetsk Oblast). 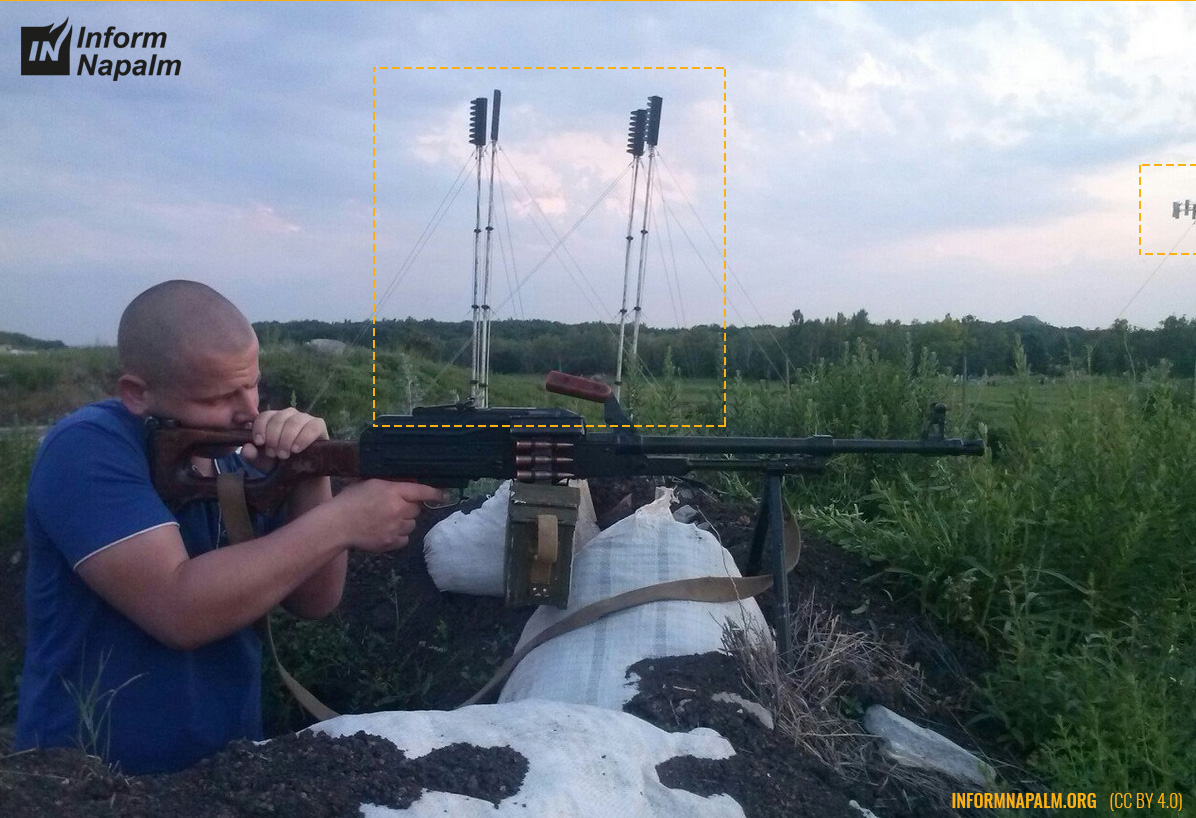 It is curious that in December 2015, a press release of the Russian scientific enterprise NPP PROTEK, the manufacturer of this system, boasted the deployment of the R-330Zh Zhitel in real combat (archive page).

In 2016, InformNapalm volunteer intelligence community also published a unique investigation based on the analysis of screenshots from the control workstation of the R-330Zh Zhitel system. These photos were obtained by Ukrainian hacktivists of the Trinity group from a hacked smartphone of a Russian serviceman. The investigation indicated that the Russian Army actively deployed the R-330Zh system in hostilities against the Armed Forces of Ukraine outside the city of Debaltseve in the winter of 2015.

The Russian system R-330Zh Zhitel has been repeatedly spotted the Donbas on other better-quality aerial photographs during 2016 and 2017. For example, the picture below was taken 7 km from the contact line in November 2017. Coordinates: 48°37’46.3″N 39°12’54.1″E (near Zemlyane village, Luhansk Oblast) – read more in another InformNapalm investigation. 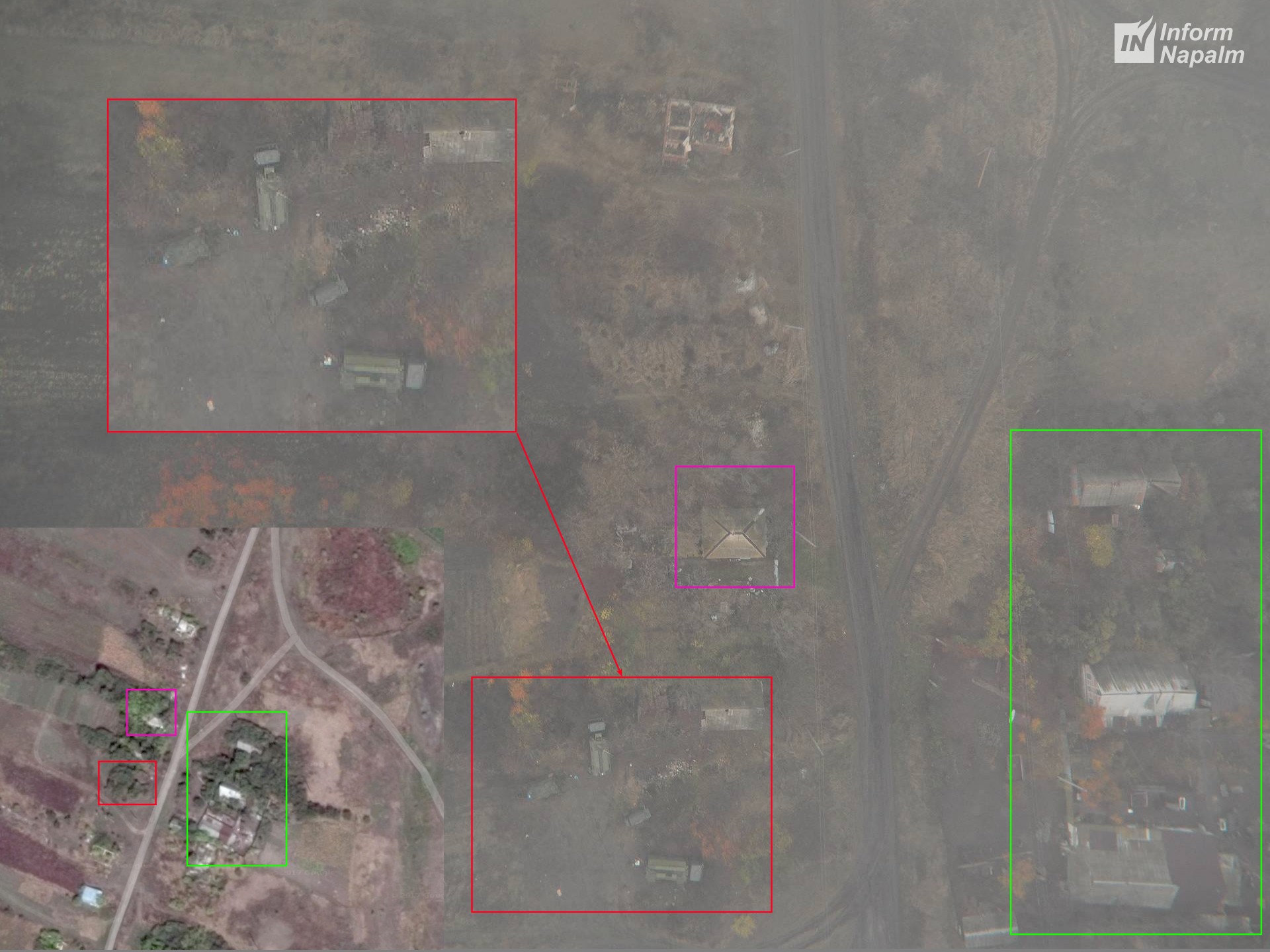 You can see a typical example of the deployment and operation of the Russian R-330Zh Zhitel system in the following video:

At the 1267th Plenary Meeting of the OSCE Permanent Council which took place on May 14, 2020, the delegation of Ukraine yet again recalled that Russia had not responded to numerous requests for explanations regarding the presence in the temporarily occupied parts of the Donbas of modern Russian weapons and military equipment including the electronic warfare systems RB-341V Leer-3, R-934B Sinitsa, R-330Zh Zhitel and others.

As of 2020, the InformNapalm database of the Russian aggression against Ukraine has listed evidence of the deployment of at least 12 types of Russian electronic warfare and signals intelligence systems in Donbas. 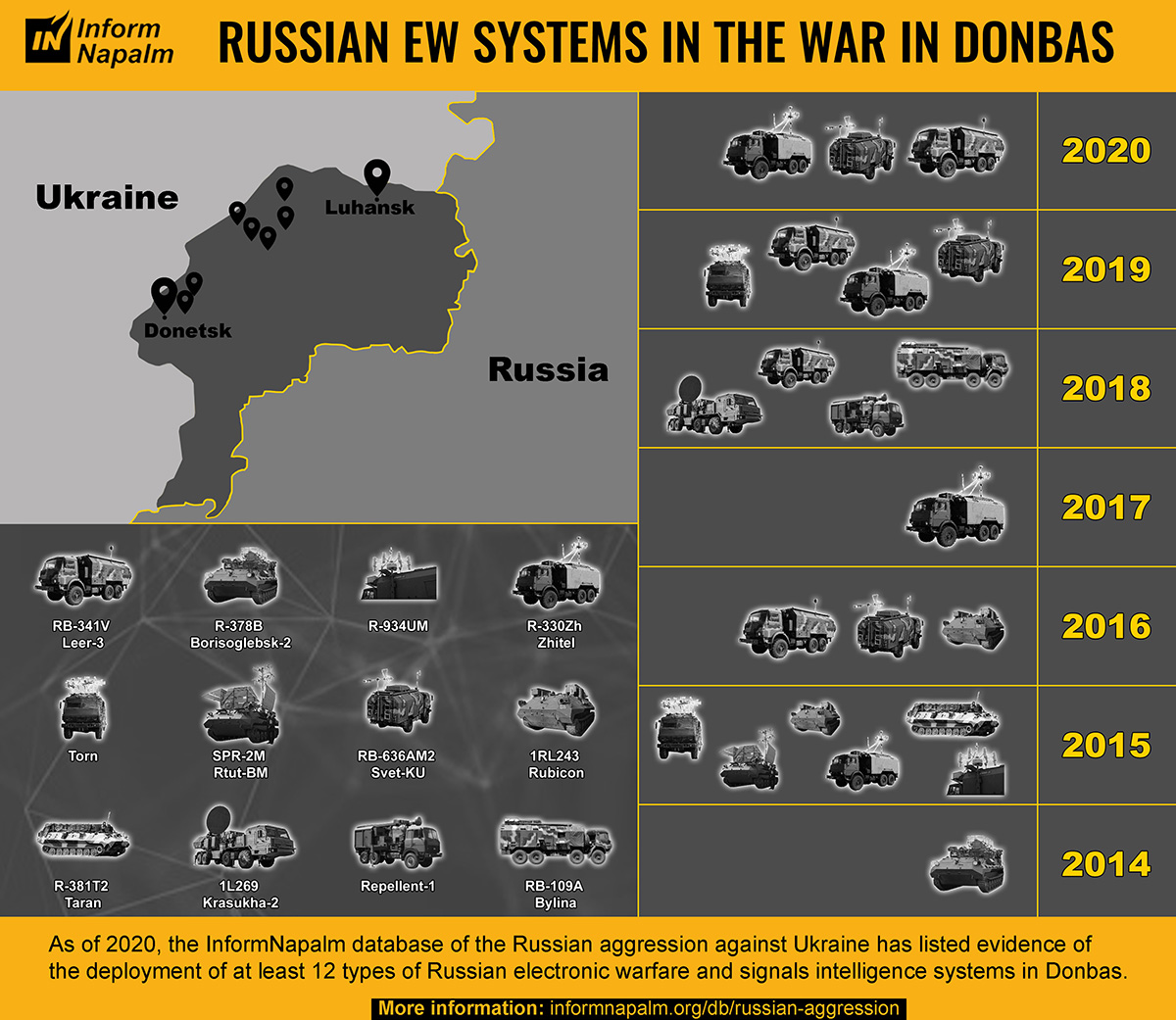