It is official, Russian army deployed R-330Zh jammer in the battle of Debaltseve 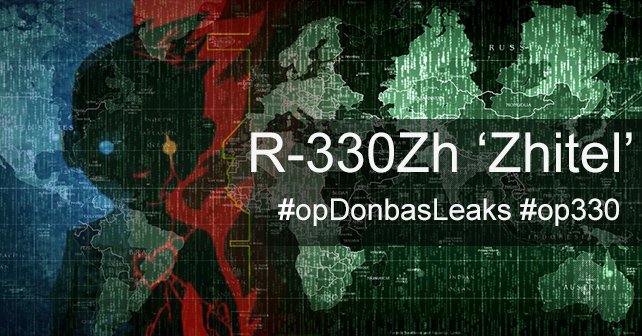 The international volunteer community InformNapalm carefully studied the data retrieved by the Trinity hacker group from the hacked cloud storage of a Russian serviceman’s phone. A part of the obtained information is being currently used for operational purposes. We have photos in our possession that are reasonably identifiable as screen shots from a workstation of the Russian R-330Zh “Zhitel” automated jamming station (AJS). The time, location, and content of the photos, as well as additional analysis of the satellite imagery performed by InformNapalm volunteers, allow us to establish that this jammer was deployed in the battle of Debaltseve in the winter of 2015. 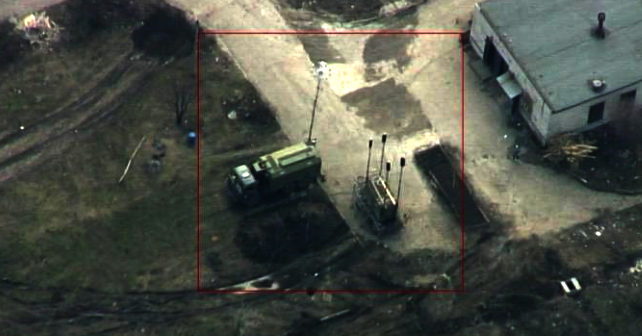 It is worth reminding, that in a recent publication R-330ZH ‘ZHITEL’ in Donbas According to Social Profiles and Drone Flyovers we have already presented evidence about this Russain AJS: a video revealing the jammer on its march towards the Ukrainian border in the summer of 2014, station elements in pictures in the profile of a Vostok gang militant in the area of Makiivka in the summer of 2015, as well as recent drone images confirming the positioning of the station in the same area as of March-April 2016.

There was only one element missing in the body of evidence: we needed to get inside the Zhitel station. Hackers of the Trinity group gave us this opportunity. The cloud storage connected to the mobile phone of a Russian serviceman contained two interesting photos. During their analysis, we found that these photos were taken on January 24, 2015 at 19:49 and 19:51 Kyiv time using a Lenovo A516 smartphone. They are showing working screens of the R-330Zh Zhitel AJS terminal. First photo: 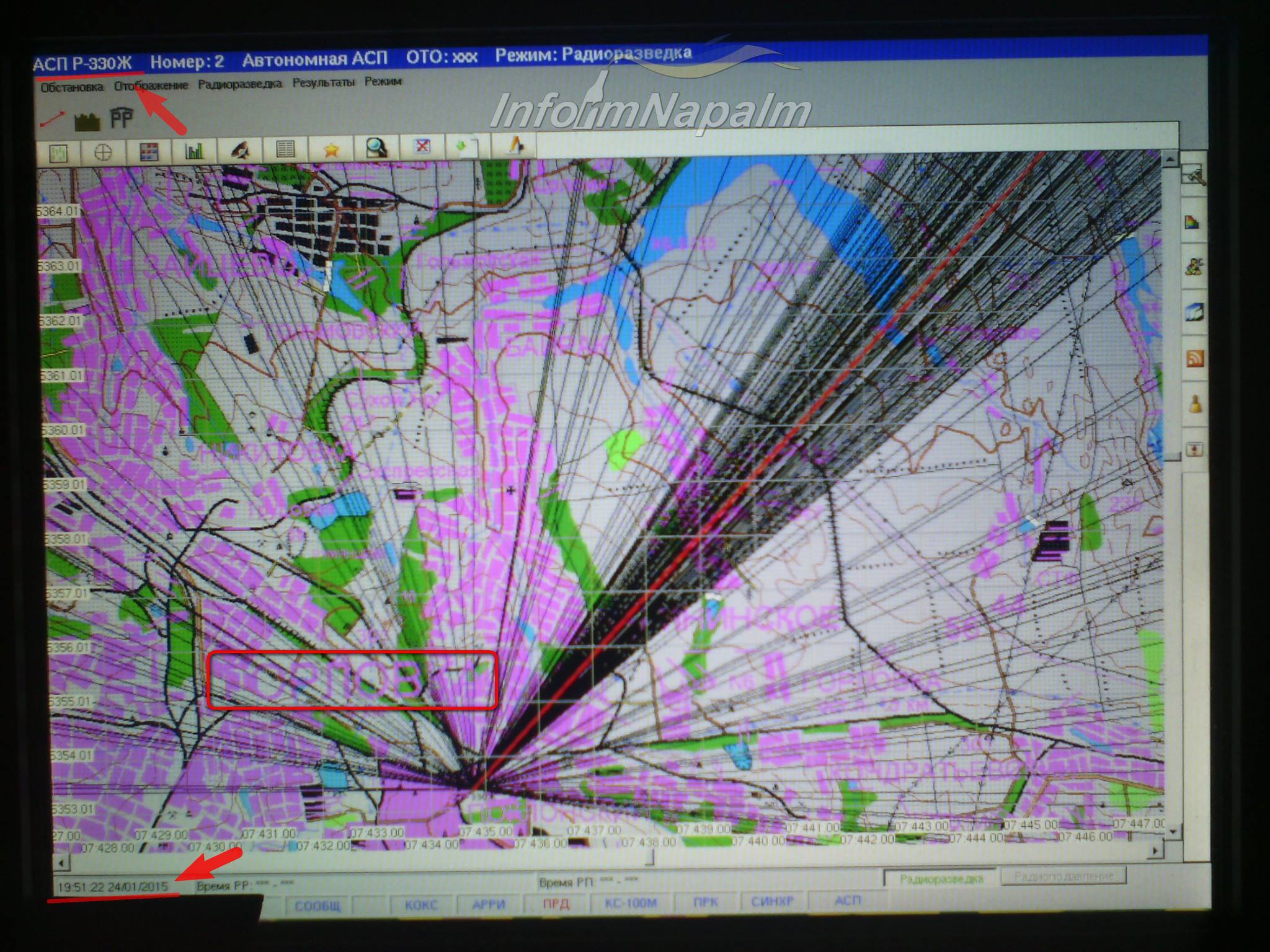 The upper left corner of the screen: The Russian inscription “АСП Р-330Ж” stands for AJS R-330Zh “Zhitel”. The lower left corner – the date: 24/01/2015. Also on the map, the names of Ukrainian settlements can be identified: Horlivka (marked), Zaytseve, and others. The red line with the bundle of rays shows the main direction of signals intelligence effort of this Russian AJS pointing towards the area of Svitlodarsk, Luhanske, and Popasna.

For comparison, here is a frame from a SEIMTV channel news piece titled “Electronic warfare troops conduct exercises” clearly identifying our photo as a typical screen of the Zhitel jammer workstation. 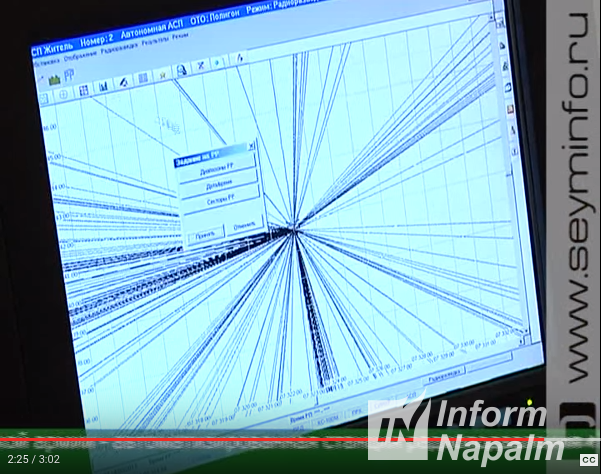 The second picture retrieved from the cloud storage shows the results of a radio frequency mapping in the area, in the 115-175 MHz band (frequency and directional chart). The vertical axis represents the azimuth of 0 to 360 degrees, the horizontal axis shows the frequencies. Red dots indicate the subscribers that have gone offline, green dots are for the active subscribers. The captured bearings are mainly within 150-175 MHz frequency range which falls into the VHF band. For example, one of the most popular radios with the Ukrainian servicemen is Baofeng UV-5R, which can operate in the VHF mode at the frequencies of 136-174 MHz. Another thing worth noting is the reflection of the ceiling lamps (typical for the military KUNG modules) in the upper left part of the image. 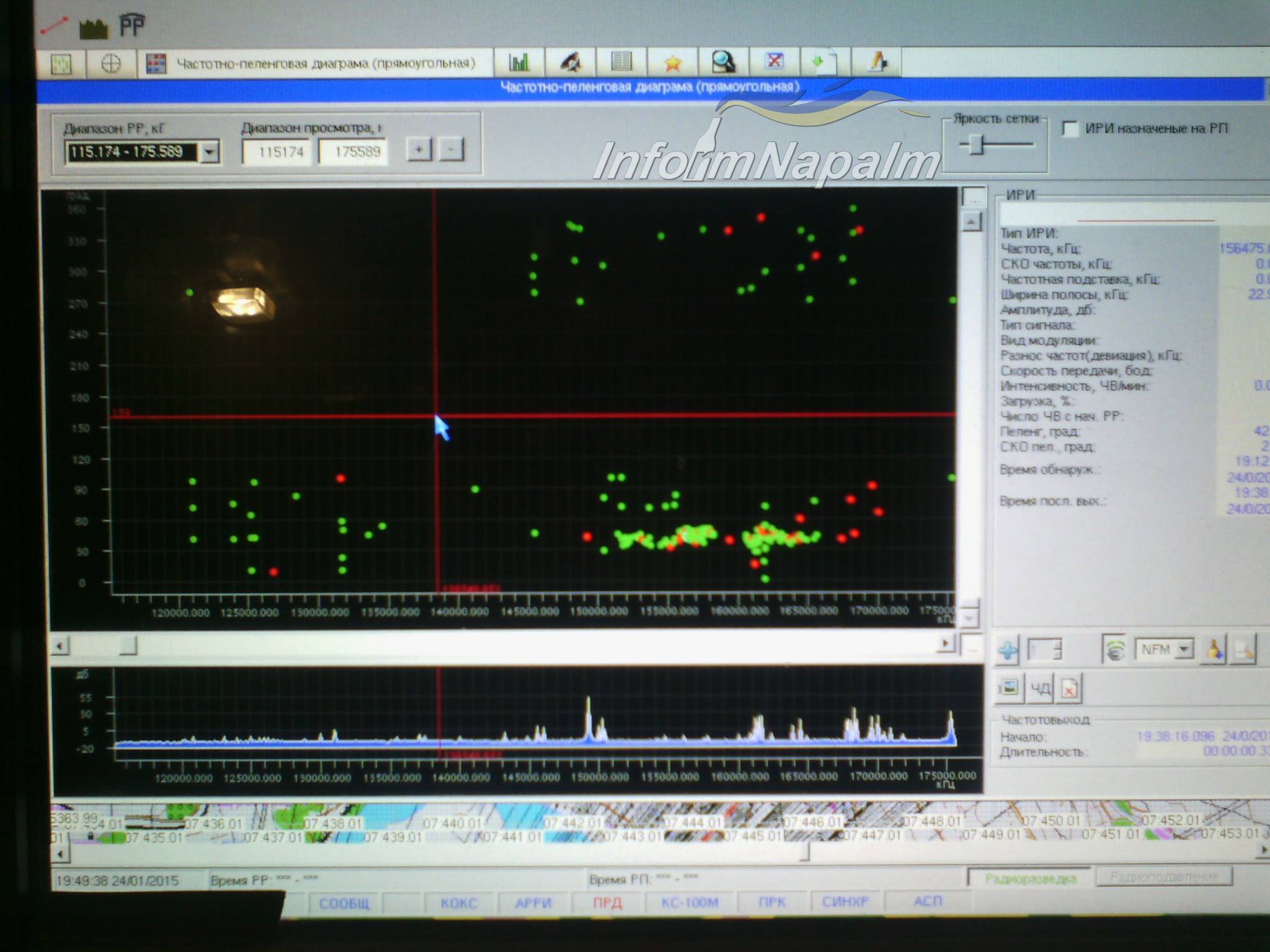 For comparison, let us take another look at another frame from that SEIMTV piece about the electronic warfare (EW) troops exercises, showing the frequency and directional chart screen. 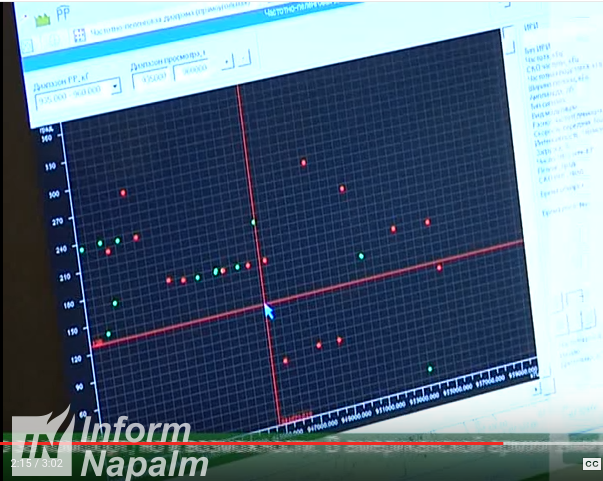 The frame from the Russia 1 channel piece from Nizhniy Novgorod of March 30, 2011 titled “An EW company on a scheduled field exercise” also allows to compare the ceiling lamps with the one featured in the screen reflection above. 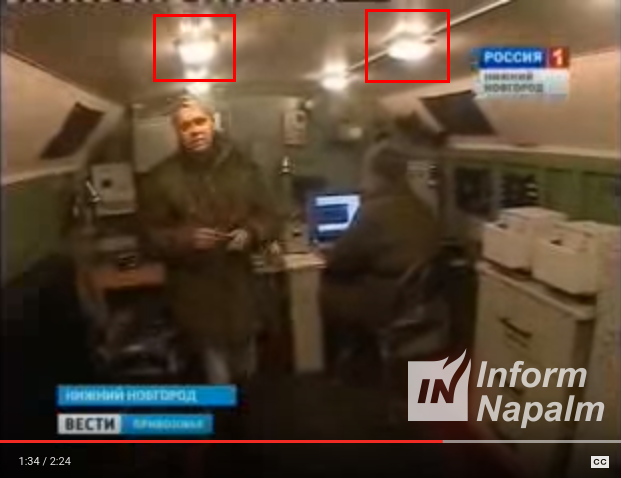 Let us return to the first photo, to try and establish the exact position of of the AJS on the basis of the cartographic data,. The red label is marking the Vuhlehirsk reservoir near the village of Svitlodarsk, Donetsk region, Ukraine. 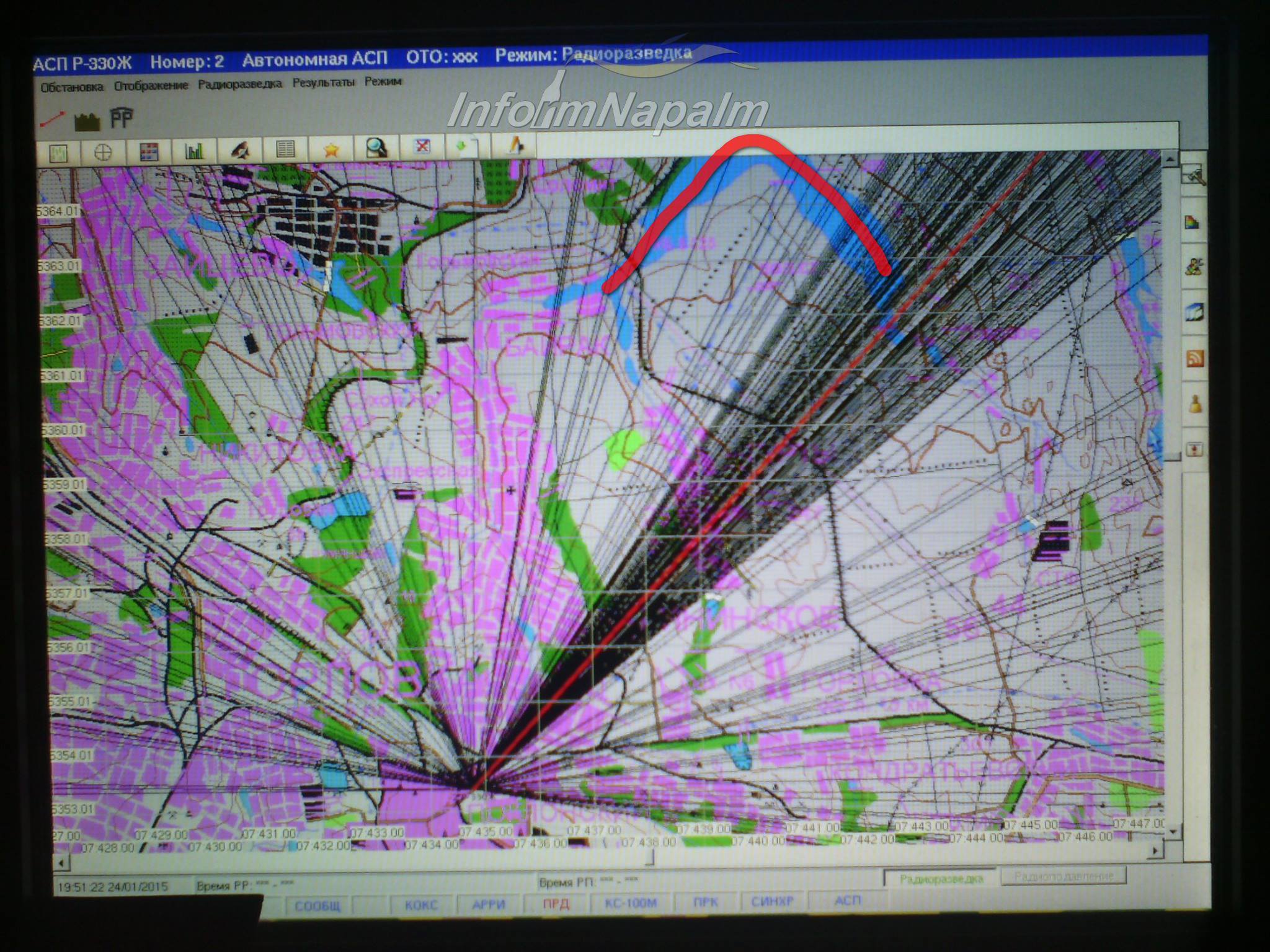 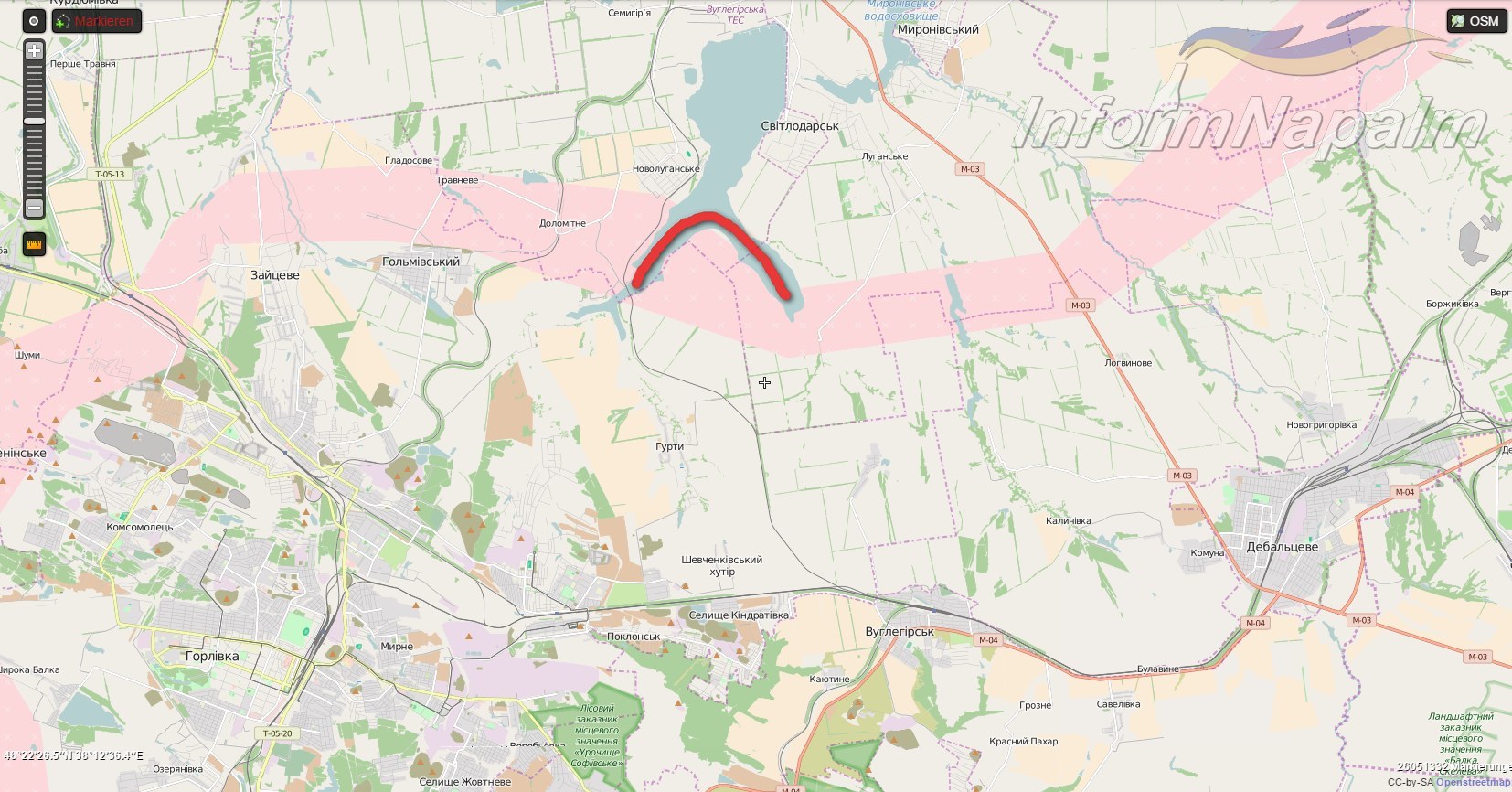 The only open question is whether the station seen in Makiivka and then in Horlivka is the same or if there were several units of this Russian AJS deployed in Ukraine. Shown below, is the coverage area of this station as positioned on the identified images from Horlivka. 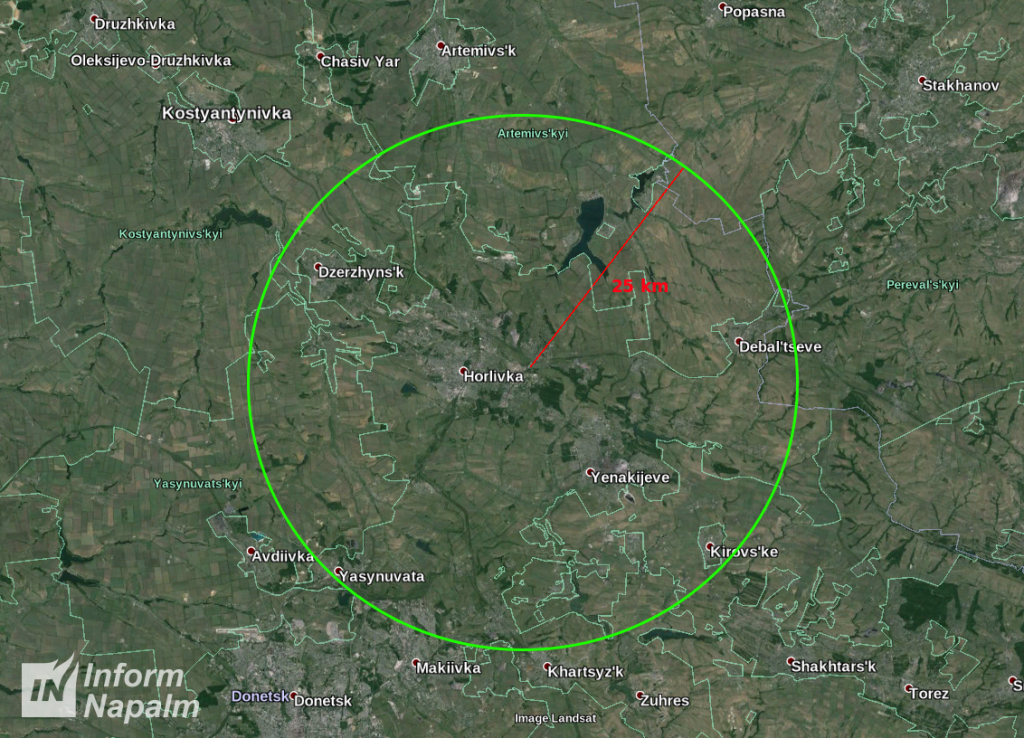 In addition to the analysis of the data obtained from hackers, InformNapalm volunteers conducted additional intelligence of the areas using Google Earth satellite maps to confirm the authenticity of the pictures and our assumptions as to the location of the AJS. The satellite imagery from February 27, 2015 confirms the presence of R-330Zh Zhitel AJS in the territory of the Horlivka city fire station No 28 (the control truck is in the shadow of the building, only its antenna is visible). 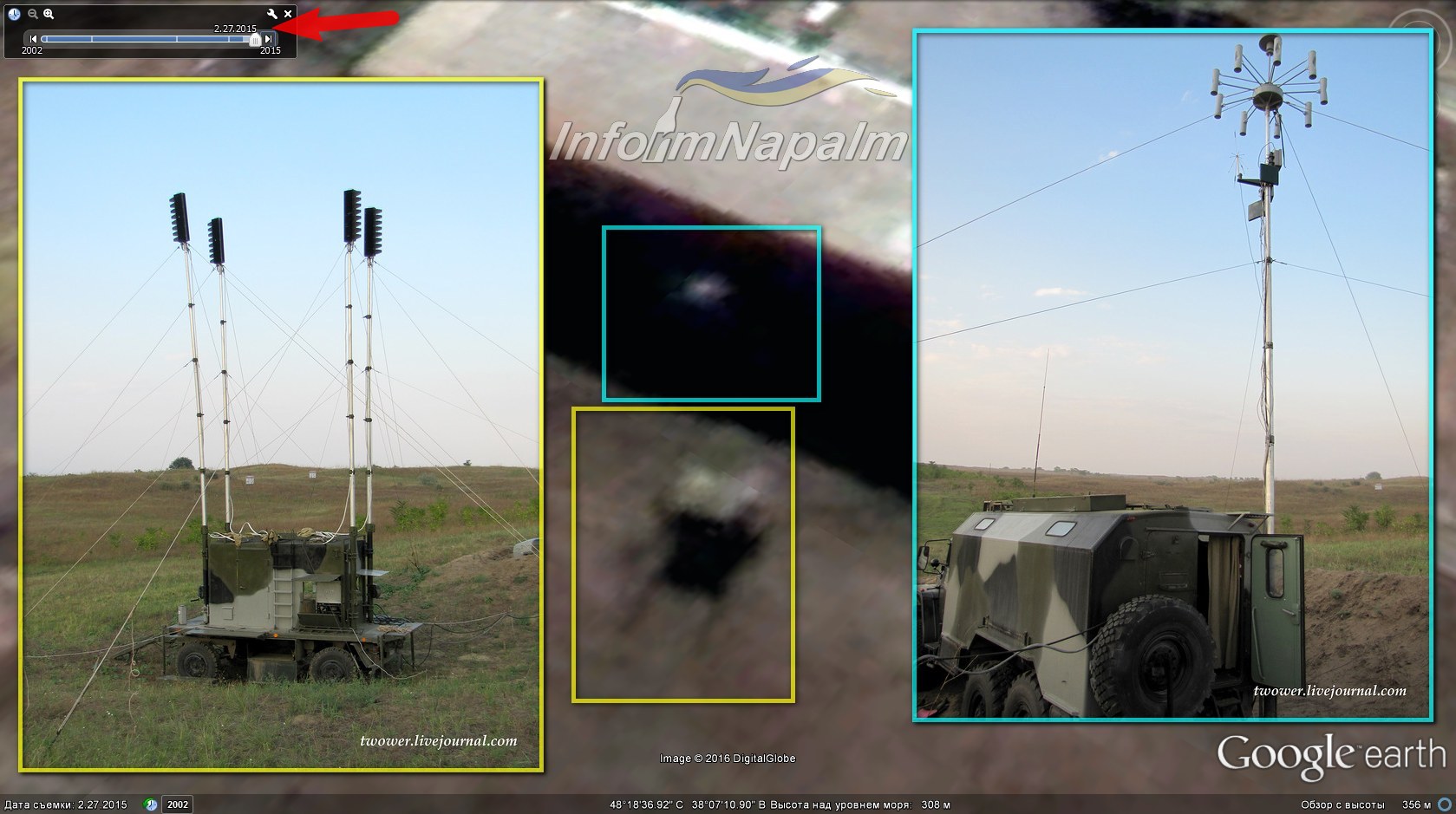 Based on our analysis, we can assert that the station remained in that place roughly from January 24, 2015 to February 27, 2015, exactly at the height of the battle for the town of Debaltseve, which falls within the 25-kilometer coverage zone of this AJS.

In this publication, we deliberately did not disclose the identity of the Russian soldier who kept secret photos in the cloud, as we foresee further activities in the interest of the investigation.

There are reasons to believe that the identified station(s) belong to the 18th Infantry Brigade. From open sources, it is known that R-330Zh Zhitel is in service with the 18th Separate Infantry Brigade (18th SIBr, military base No 27777, Kalinovskaya, the Republic of Chechnya, Russia). The participation of military personnel and equipment of this brigade in the Russian aggression in Donbas has been repeatedly documented by the InformNapalm OSINT investigators.

This publication was compiled based on the OSINT-investigation of the InformNapalm international volunteer group from the data obtained by the Trinity hacker group.
(CC BY 4.0) This information has been specially prepared for InformNapalm.org, an active link to the authors and our project is obligatory for any reprint or further public use of the material.

12 Responses to “It is official, Russian army deployed R-330Zh jammer in the battle of Debaltseve”