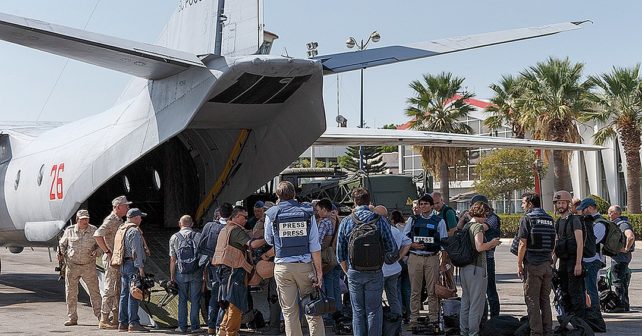 The news was quickly spread by Russian media, and Russian Ministry of Defense was forced to admit the loss of a plane right away in order not to make fools of themselves. It is not clear if the plane experienced a malfunction or was shot down from the ground. However, Russian officials immediately dismissed the possibility of an attack.

Khmeimim Airbase is surrounded by civilian settlements populated by Allawis who are mostly loyal to Assad. However, we need to take into account that the slow and low airplane could become an easy target for a machine gun or even a sniper rifle that would damage some critical component, and the pilots would have no time to respond to the failure.

In any case, witnesses report that the plane was approaching with a tilt, it was shaking, and it hit some ground structures. Most likely Russian Ministry of Defense will stick to the “malfunction” version and reject any possibility of the plane being hit from the ground. 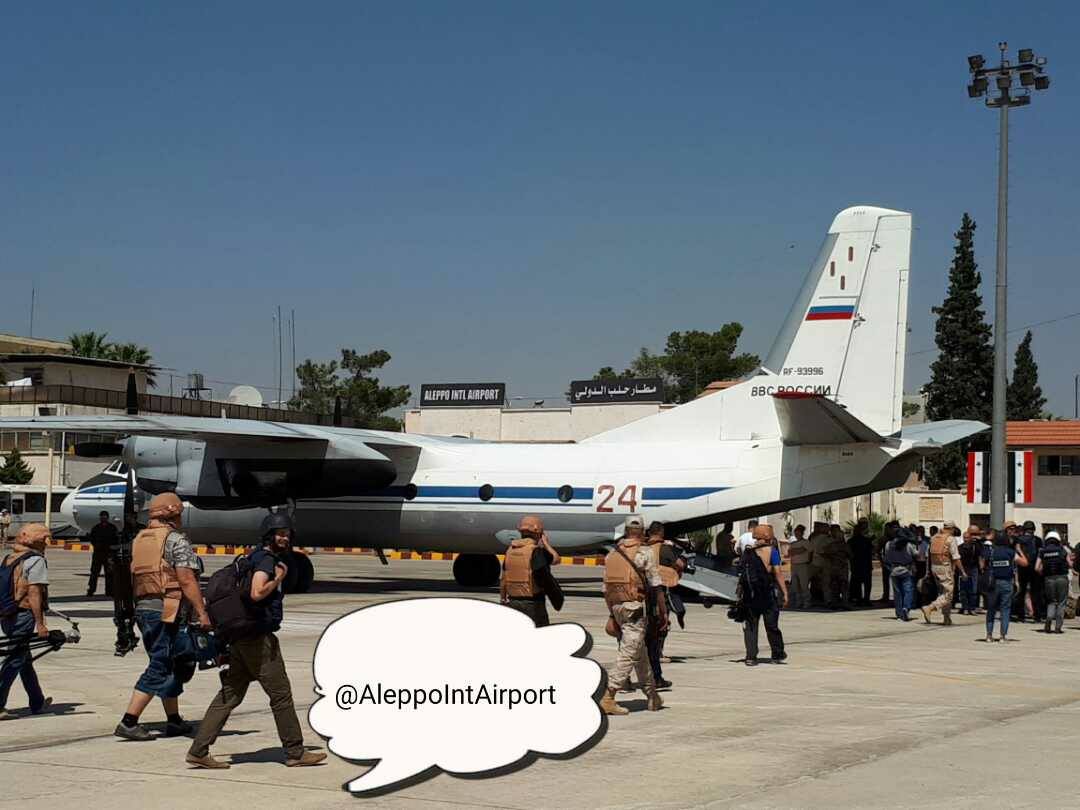 At least 2 AN-26 aircraft have been observed in Syria. One of them is RF-36162/26, “26 Red”. Photos of that particular plane were used by Russian media in the reports of this event. This aircraft brought journalists to the Aleppo airport in 2017. The plane was manufactured in 1980 and just turned 38 years old. It is a very advanced age for an aircraft, and even taking into account that military fleets are usually maintained and inspected better than civilian ones, human error and the age of the plane could be possible reasons for the crash. There was also another AN-26 plane observed in Syria, RF-93996/24, “24 Red”. It was manufactured in 1979, so it’s even older than the first one.

Last year, the Russian government was anxious to find ways of extending the service life of Antonov aircraft using local specialists. Obviously, Russian technicians can repair those planes in the field, however they lack the official approval of the manufacturer. Today there are 236 AN-24 and AN-26 aircraft in Russia. The Military Balance reports that there are more than 100 AN-26 in service with Russian Air Forces.

AN-26 is the primary aircraft of Russian military transport fleet. It was manufactured between 1969 and 1986. The youngest plane will be 32 years old this year.

Over the last 3 years Russian military transports have been constantly used to support Russian forces in Syria. Heavy equipment is delivered by sea from Novorossiysk and Crimea, but Russian Air Force is responsible for personnel transport and urgent cargo deliveries.

There are also several IL-62 aircraft flying to Syria (RA86559, RA86561 и RA86495). They usually carry senior officers or VIPs. For example, on March 5th, RA86561 landed in Damascus, and the next day news agencies reported that the Chief of the General Staff of Russian Armed Forces Valeriy Gerasimov had arrived in Syria. It is possible that Major General Vladimir Yeremeyev, who was on board of the crashed AN-26, was flying to meet with him. 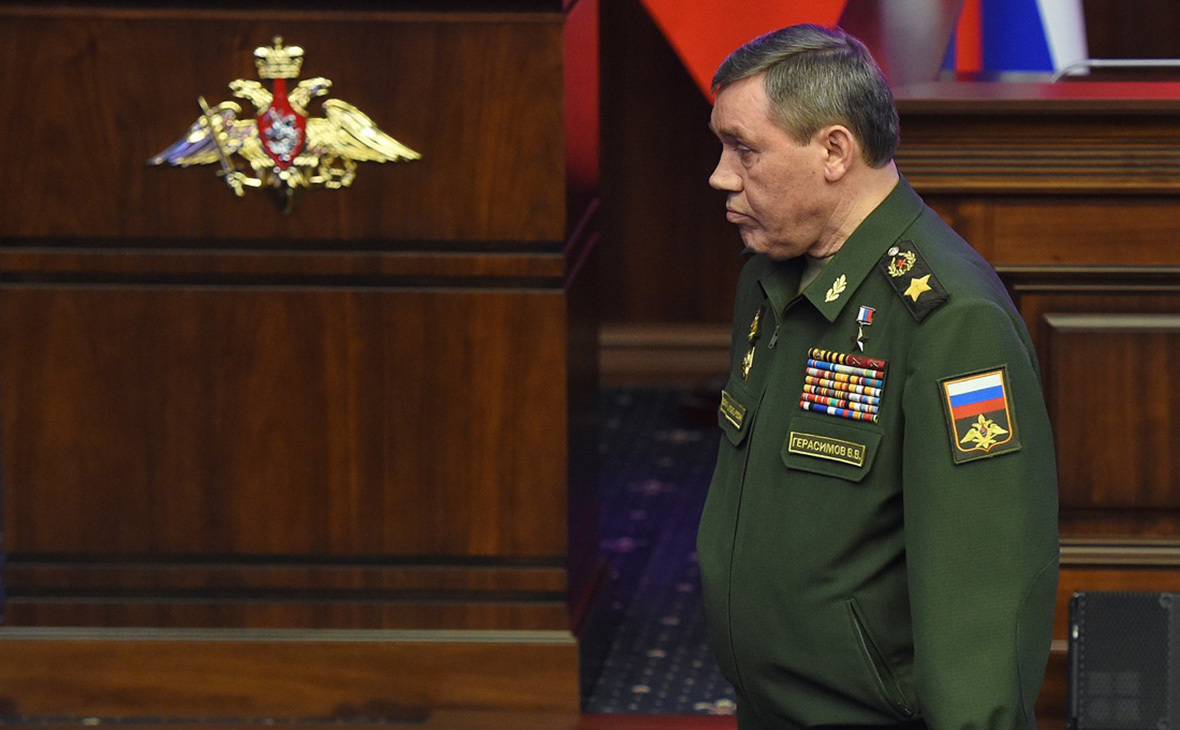 Usually, flights from Russia to Syria go over Iran and Turkey. They primarily fly to Khmeimim and Damascus. There is still civilian air traffic over Syria (Syrian Air and FlyDamas) that uses airports in Aleppo and Al-Kamyshly (near Turkish border).

AN-26 was flying from Kuweires (Aleppo) to Khmeimim (Latakia). It is a short flight of little less than 200km. Local flights like this one was what the AN-26 had been doing in Syria. It was a sort of an air taxi for Russian officers. Probably Major General Yeremeyev and his staff officers were called to meet with Gerasimov in Aleppo. Ground transportation would take much more time and could be more dangerous, so they decided to fly. It didn’t help them and as a result Russia receives another “Cargo 200”. 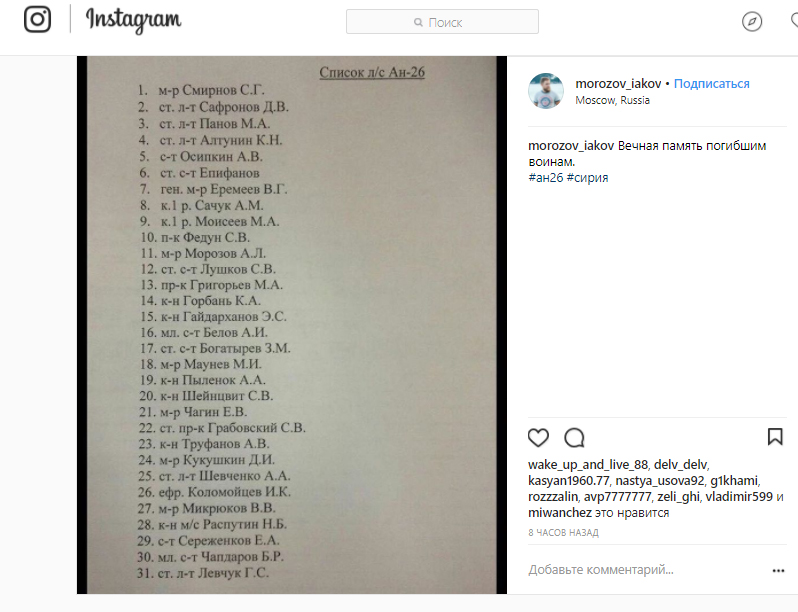 Probably this list was also obtained by the journalists of RBC. As the publication states, “The authenticity of this list of An-26 personnel was confirmed to RBC by three sources in the Defense Ministry. In total according to the Ministry of Defense, the plane carried 39 people. At the moment, the names of 31 dead are known.”

For some reason the list does not specify the initials of Senior Sergeant Yepifanov.
The Instagram channel ‘yelansky_garnizon’ had its first condolences with the mention of servicemen from the list. 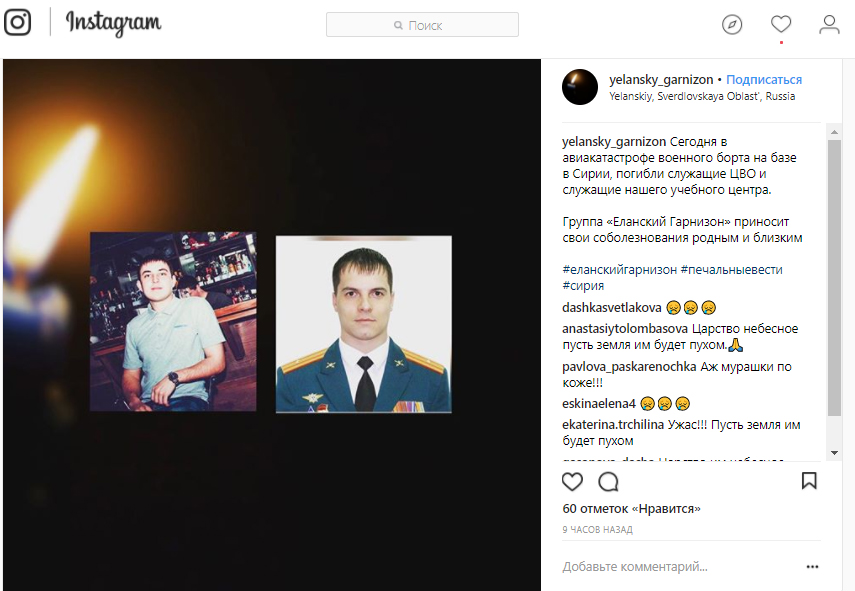 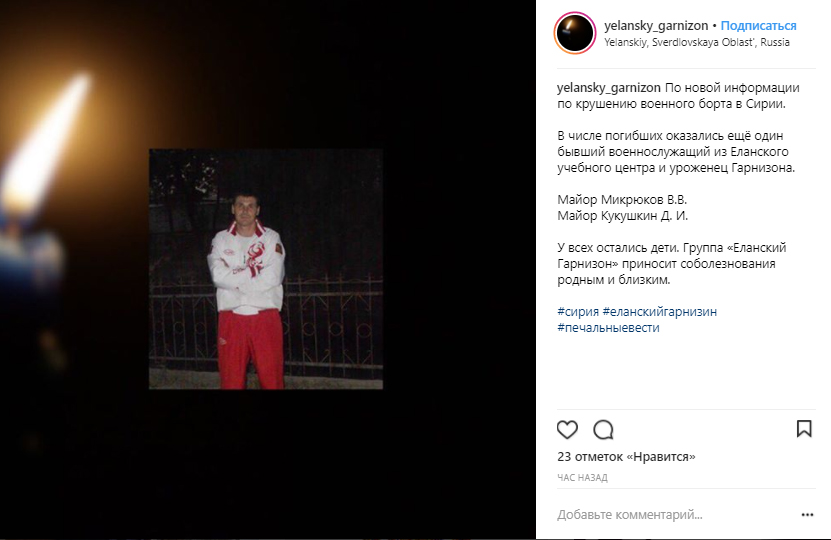 The entry states that among the dead were former servicemen from the Elanskiy Training Center and a local of the garrison: Major Mikryukov V.V. and Major Kukushkin D.I.
At the same time, investigative bloggers in social networks do not trust this list yet and continue to seek confirmation or refutation. 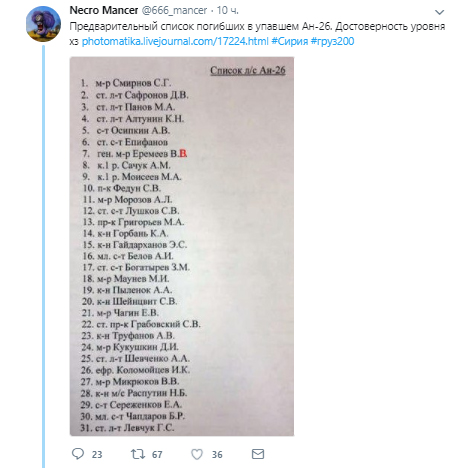 This publication was prepared by Anton Pavlushko specially for InformNapalm. Translated by GEK, edited by Max Alginin
(Creative Commons — Attribution 4.0 International — CC BY 4.0)
Repost and share with friends.
For notifications about InformNapalm investigations follow us on Facebook and Twitter.