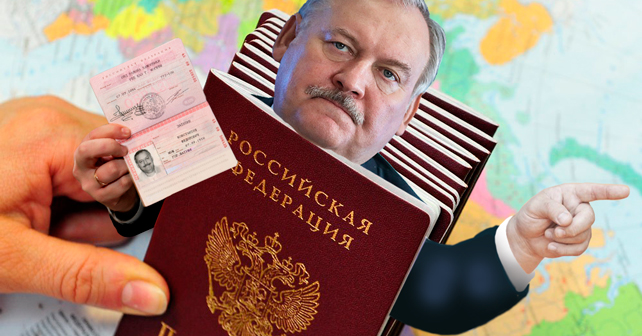 Volunteers of InformNapalm international intelligence community continue the painstaking analysis of the personal documents and correspondence of the Russian State Duma deputy Konstantin Zatulin and his staff from the Institute of CIS Countries. The access to confidential information of Russian politicians and officials, including Vladislav Surkov, was provided by the hacktivists of Ukrainian Cyber Alliance (UCA) and CyberHunta who forwarded the data to InformNapalm for study and publication.

The analysis of the hacked correspondence of Konstantin Zatulin’s staff provided the basis for a series of publications, about Alexander Usovsky (part 1, part 2) who organized pro-Russian events and anti-Ukrainian provocations in Eastern Europe, particularly in Poland. These materials provided a glimpse into the inner workings of Russia’s political scheming propaganda in the EU, some of them have received coverage by the world media. 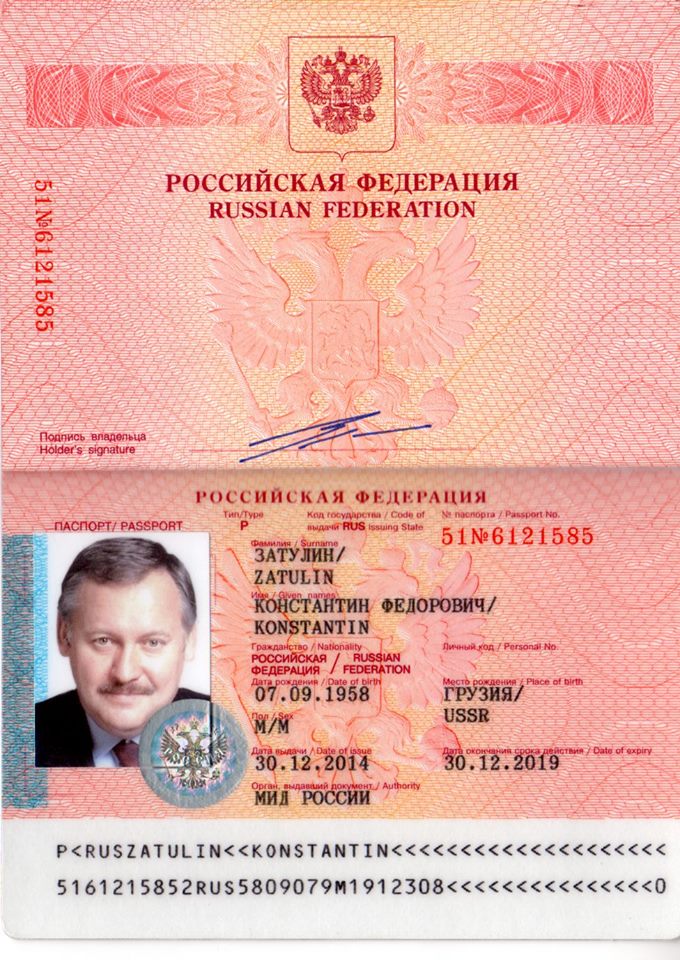 We received for analysis the dumps with thousands of files and requests from the citizens of post-Soviet republics, as well as the Russian-speaking citizens of non-CIS countries, who dream of getting a Russian passport and moving to Russia and apply to the Institute for legal assistance. The activities of Zatulin and Co can be summarized by: “Got nostalgia? Pack up and go to Russia!”

People turn to Zatulin’s office for advice, assistance and documents, as they would do to a passport office in the former USSR. All requests are processed and forwarded to the Federal Migration Service (FMS), Russian Ministry of Foreign Affairs and FSB. Konstantin Ivanovich Zatulin and his staff are improving the demographic situation in Russia in an unconventional way, helping natives of the former USSR, as well as all those considering themselves to be Russians in France, Germany or Uruguay “become true Russians”.

After the outbreak of the war with Ukraine, most requests come from the holders of Ukrainian passports, who want to “return” to Russia, but do not want to fight for the Russian world in Donbas.

Ruslan Marmazov is building his own DPR in the Russian Tula

While studying the documents, we found out that the former head of the press service of the Donetsk Shakhtar FC, Ruslan Marmazov, chose not to live in the Donetsk People’s Republic (DPR), but moved to the Russian city of Tula instead. 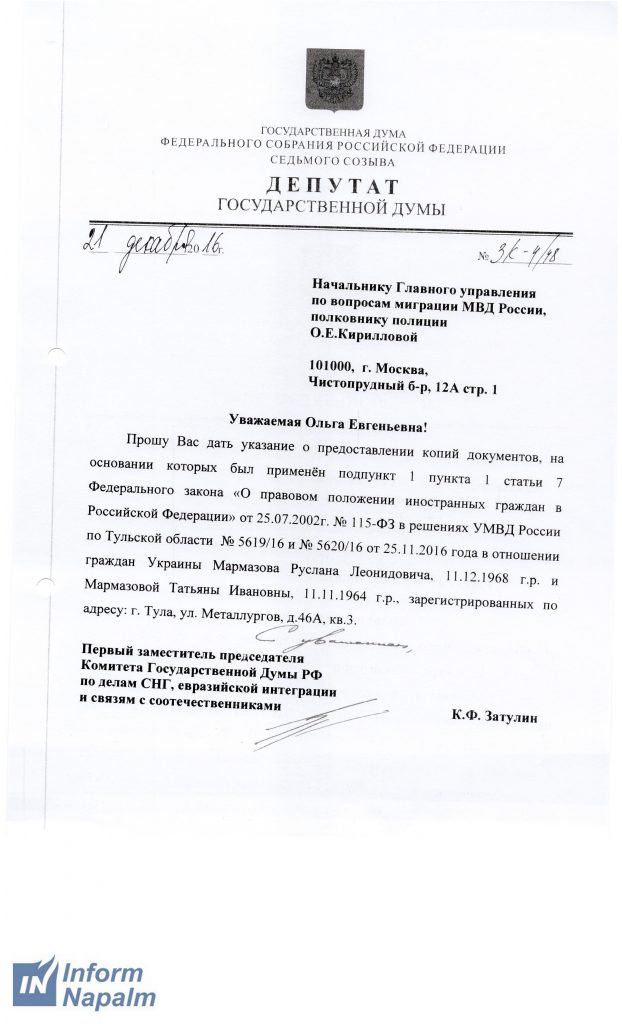 Immediately after taking the DPR side, Marmazov plunged headlong in the affairs of the new puppet republic. However, his fervor quickly died out, and he moved to Moscow, where he began to imitate journalistic activities.

Although he has been often seen in Moscow, he is registered with his wife in the provincial city of Tula at the following address: Metallurgov St., 46a, apt. 3. 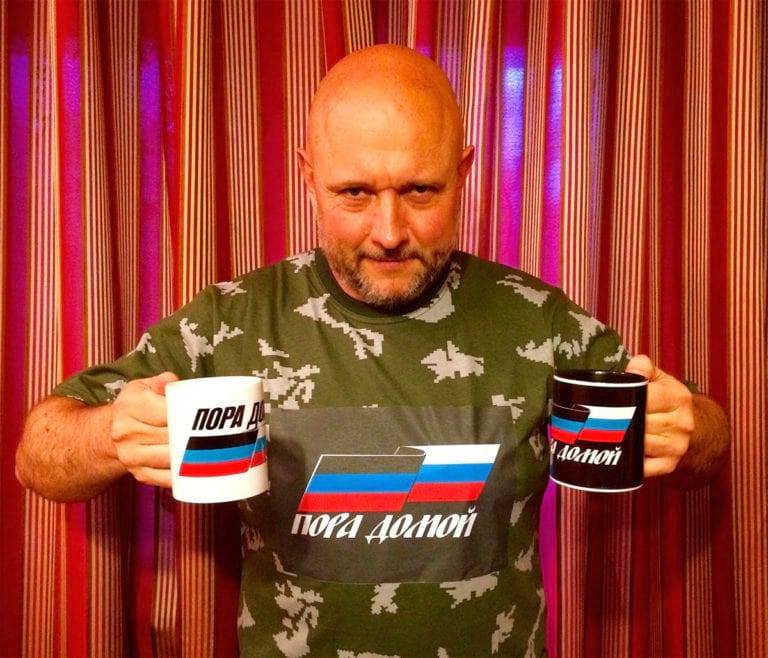 Apparently, the Marmazovs managed to surprise the local officials with their imperial designs, so much that they got a notice of imminent deportation to Ukraine under Article 7 of the Federal Law No. 115-FZ On the Legal Status of Foreign Citizens in the Russian Federation:

Article 7. Grounds for refusal to grant or revocation of a temporary residence permit

The staff of the Kharkiv Berkut (Ed.: Ukrainian riot police unit implicated in mass killing of Maidan protesters in Kyiv) have been more fortunate. In April this year, four former Berkut employees fled Ukraine: Oleksandr Kostyuk, Artem Voylokov, Vladyslav Masteha and Vitaly Honcharenko, all of them are under investigation of their role in the shooting of civilians on Maidan. 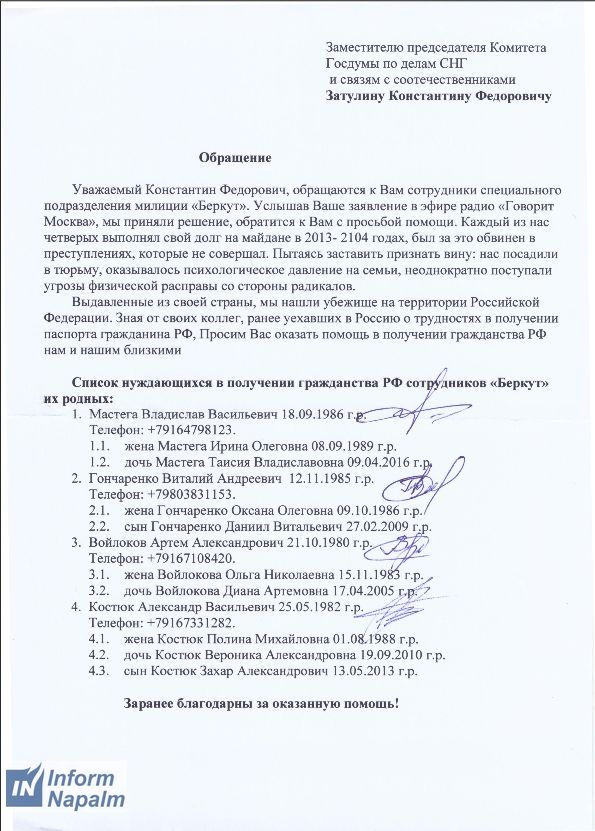 Ukrainian judicial system allowed them to leave for Russia, where the “Berkut veterans” first of all asked for the Russian citizenship promised by Zatulin.

Often, Zatulin and his subordinates have to “fight the Russian bureaucracy”, which sees in every runaway holder of the Ukrainian passport first of all a Ukrainian citizen, and only then a champion of the Russian world. For instance, an organization called Union of Political Immigrants and Political Prisoners of Ukraine writes to Zatulin with a request for a preferential residence permit in Russia after local officials decided to send back to Ukraine citizens Roman Hryva and Oleksandr Lakh (a member of the Party of Regions from Lviv). Zatulin, without hesitation, wrote directly to the Head of the Federal Migration Service, colonel-general Konstantin Romodanovskiy (who held this post until the end of 2016). 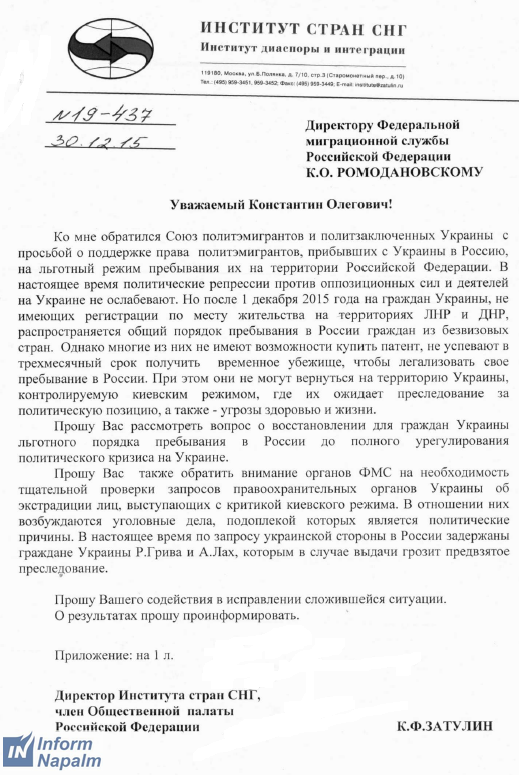 In general, the Institute of the CIS Countries works very closely with the Federal Migration Service and FSB. For instance, in December 2015, Zatulin asked Romodanovsky to grant political asylum to a German citizen. 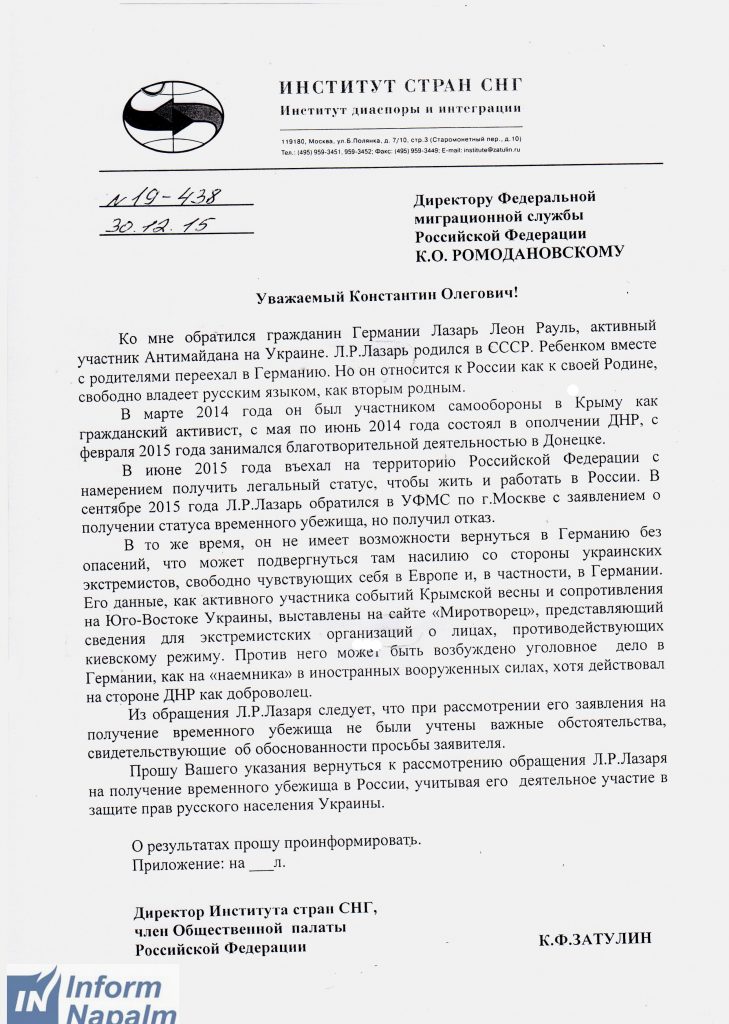 In 2014, Leon Raul Lazar took part in the annexation of Crimea in the ranks of the “local self-defense”, then went on to fight for the DPR, ended up on the Myrotvorets lists and is now afraid to go back to Germany. However, Russian officials did not appreciate his patriotic impetus and did not rush to grant Lazar a provisional asylum.

This is a very strange story. A Russian MP helps legalize an international terrorist from Germany. Can you imagine, for example, a member of German Bundestag helping legalize an ISIS fighter? In Russia, however, this is business as usual.

The Institute of CIS Countries works consistently and responds to almost all requests. It made us wonder what kind of trivia is being done for the Gazprom money. Here, for example, are requests to issue long-term Russian visas to Lithuanian citizens: 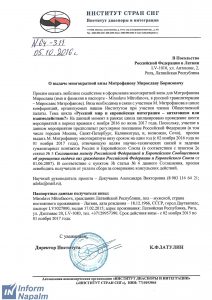 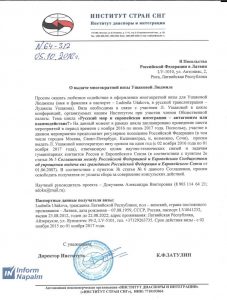 Do you speak the language? Get your citizenship and enjoy mother Russia!

Last year, lots of paper and energy was spent by the Institute to push through the law on Russian language speakers. Thanks to this law, anyone who speaks some Russian can count on Russian citizenship. You just pass the language test and an FSB check to become a Russian. To help the “new Russians,” the Institute of the CIS Countries has even developed a scheme for obtaining citizenship or official status in Russia. 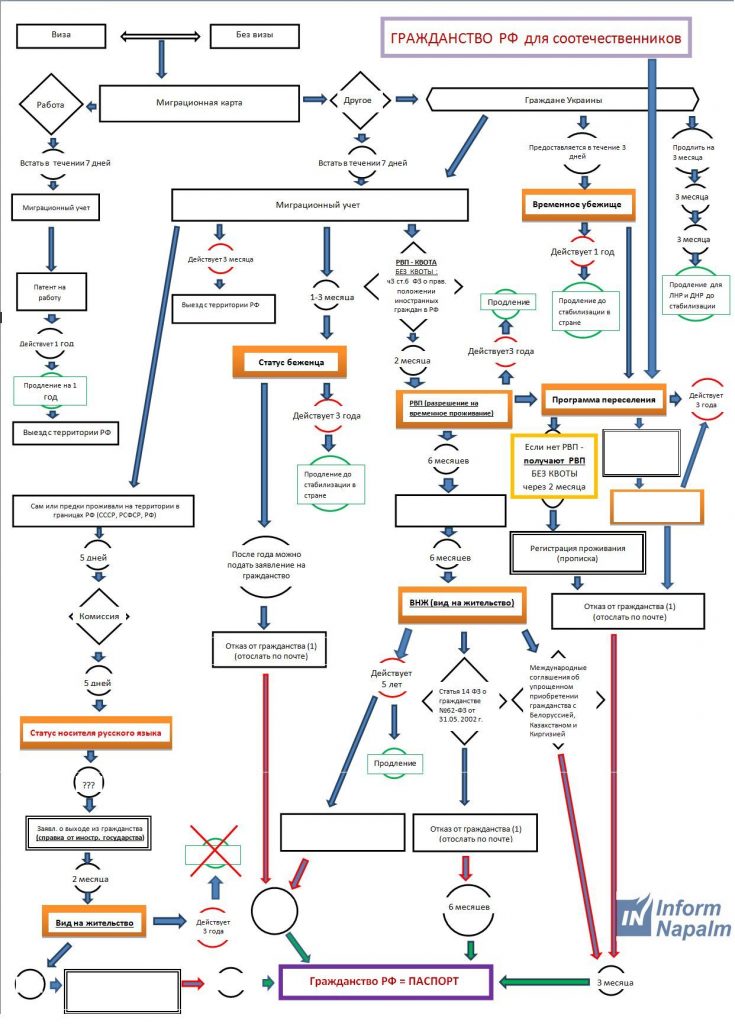 The Institute of CIS Countries helps thousands of foreigners with a peculiar mindset and world view obtain a residence permit in Russia and solve the Russian demographic problem. We approve of this effort. After all, it helps many people to settle where they belong.

Translated by InformNapalm English
An active link to the authors and our project is obligatory for any reprint or further public use of the material.
(Creative Commons — Attribution 4.0 International — CC BY 4.0)
Repost and share with friends.
For notifications about InformNapalm investigations follow us on
Facebook / Twitter / Telegram
.