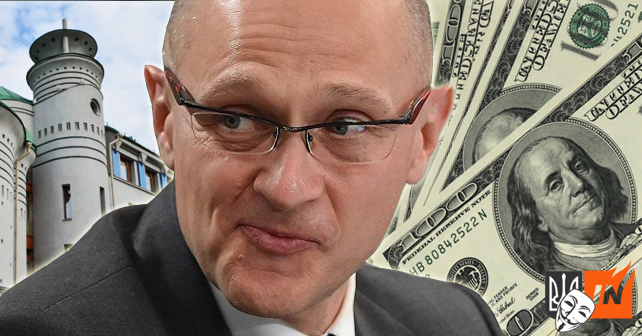 The hacktivists of Ukrainian Cyber Alliance and CyberHunta shared with the volunteers of InformNapalm volunteer intelligence community scanned copies of the documents revealing the details of the 840 million ruble financial fraud executed in 1996 by the First Deputy Chief of Staff of the Presidential Administration of Russia, Sergey Kiriyenko. As a reminder – earlier the Ukrainian hacktivists hacked the computers in the reception office of Vladislav Surkov, aide to the President of Russia, [1], [2] and Konstantin Zatulin, a Russian MP [1], [2], [3]. 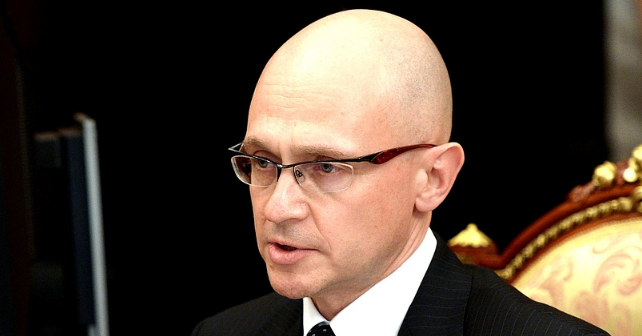 Career as Chairman of the Board of Garantiya Bank

In 1993 S. Kiriyenko decided to stay on the “safe side” – he liquidated his early business connected with the YCL and cleaned up after himself. Instead, he established Garantiya bank (allegedly, under the “protection” of gangsters with such exotic nicknames as Vagon (Wagon) and Zima (Winter).. His income increased multiply as compared with the usual scams connected to buying and selling operations which were unavoidable for any business in Russia at that time. At Garantiya, Kiriyenko realized his management skills of “3rd degree master of administration” fully. He obtained this degree at the Nizhny Novgorod branch of the Hubbard College belonging to the Church of Scientology considered by many governments a dangerous cult and a pseudo-religion. There he took an Administrative Technology course (management technology using the methods of consciousness suppression, blackmail and libel to achieve business goals).

Kiriyenko turned out an apt student with an appetite for debt fraud involving the people close to him or his “protectors”. He “got” his first really big money from retirees. He made an arrangement with V. Babakayev, head of the State Pension Fund branch in Nizhny Novgorod region, and V. Barchuk, Chairman of the Board of the State Pension Fund whereby major taxpayers, particularly, oil refineries, were to transfer money to Nizhny Novgorod region directly to accounts at Garantiya bank bypassing the Pension Fund.

At that time, there was a lack of cash in the nascent monetary system of the country, and companies often made their payments or paid salaries in kind, that is, with their products. Kiriyenko’s bank undertook a noble mission of ensuring regular pension payments by selling such products and transferring the pension money to the region. The real course of events is described in the criminal case # 550314 of 22.02.2000 initiated by the prosecutor’s office of Nizhny Novgorod region against Viktor Babakayev, as well as in numerous parliamentary inquiries.

In fact, just like many other projects of the scientologist banker, Garantiya bank to a large extent was established not with his own but with the “pension” money. From 1993 to1995, about 65% of the whole amount of pensions of Nizhny Novgorod region was invested in the authorized capital of the bank. Reference to these special relations between the Pension Fund and then Chairman of the Board of the bank, S.V. Kiriyenko, was made in the parliamentary inquiry addressed to Prosecutor General V.V. Ustinov (# СШ-11/4-3 of March 11, 2001). Members of the State Duma who signed the inquiry – S.M. Akhmetkhanov, E.G. Zyablitsev, S.P. Shashurin, V.I.Shandybin and N.P. Zalepukhin – believed that “the illegal actions of the management of the Pension Fund branch in Nizhny Novgorod region and of Garantiya bank, as well as their violations of the federal laws, caused damage to the Pension Fund of the Russian Federation in the amount of 163.7 million rubles, illegal use of the national pension assets in the amount of 67.5 million rubles and misallocation o the funds in the amount of 334.4 million rubles”.

Next to such large-scale crimes (that is how the MP qualifiied this activiry) the sale of a building constructed by the Pension Fund to the same Garantiya bank way below its market value may seem petty. However, there another even more interesting episode – “unlawful settlements between oil refineries and the Pension Fund branch in Nizhny Novgorod region” made with bills of exchange. The bills were issued by the same Garantiya bank and its subsidiary Rusneftinvest CJSC.

As the result, the Pension Fund was more than 100 million rubles short, but that was not the end of the story. Unsecured bills of exchange of the bank were used by the regional administration towards future pension payments with guarantee of those pensions borne by the regional budget. When the Legislative Assembly of Nizhny Novgorod region rejected the draft of the corresponding resolution, governor I.P.Sklyarov passed the required decision at his sole discretion. Despite the Prosecutor General’s “special attention” to this criminal case, it was closed by the Prosecutor of Nizhny Novgorod A. Fedotov “for the absence of material elements of offence”.

Apparently Kiriyenko liked the taste of the “oil money”, and in 1996 he quit the banking business which was constantly under the scrutiny of the law enforcement agencies, and became President of NORSI-oil which was 85% state-owned.

Before quitting the position of the Chairman of the Board of Garantiya bank, Kiriyenko pulled a typical banking fraud. On August 30, 1996, citizen of the Russian Federation S.V. Kiriyenko (passport VII-АГ No. 723330 issued on August 29, 1978, by the Sochi Department of Internal Affairs) and Garantiya Commercial Bank entered into a credit agreement for the amount of 840 million Russian rubles (approximately 157 thousand dollars at the applicable rate) valid for 25 years at the interest of 12 percent per annum for consumer purposes of the bank employees. On behalf of the bank, the credit agreement was signed by Deputy Chairman of the Board of the bank V.V. Kitayev. According to the agreement, the money was to be received on account No. 716300716324 in Garantiya bank.

Click on the photo to enlarge it. Image sharpness and contrast enhanced for legibility. 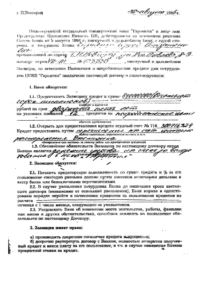 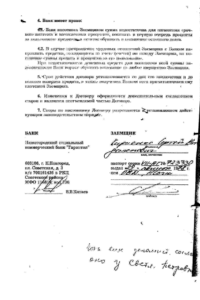 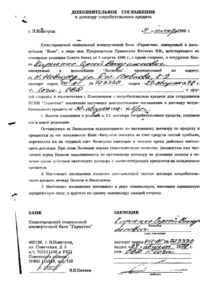 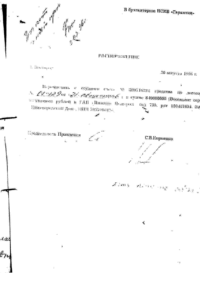 On September 4, 1996, citizen of the Russian Federation S.V. Kiriyenko and Garantiya Commercial Bank signed an addendum to the credit agreement of August 30, 1996, amending the procedure of credit repayment – now all Kiriyenko’s outstanding debt was to be repaid by the bank from its net profit.

Thus Kiriyenko embezzled 840 million rubles using his position as the Chairman of the Board of the bank.

From open sources, we found contact details of Pashik Manukyan (archived profile), one of the employees of the tax office of Nizhny Novgorod who audited Garantiya Commercial Bank in 1996. His comments of the case are as follows: “I was working in the tax inspection of Nizhny Novgorod from 1994 till 1998; at the same time, Sergey Kiriyenko was head of Garantiya bank. In 1996 I audited that bank. My colleagues warned me: “Look, Pashik, Kiriyenko is friends with governor Nemtsov”. I have to note that for pensioners the interest on their deposits was higher than for other depositors. I think, it was 35% per annum”.

We published document copies, explained the fraud and even mentioned a potential witness who can be asked hard questions. Now the ball is in the court of the Russian anti-corruption activists. InformNapalm volunteers, in their turn will continue analyzing the data from the hacked computers of the Presidential Administration of Russia.

Disclaimer: Evidence data was exclusively provided to InformNapalm by the hacktivists of the Ukrainian Cyber Alliance. InformNapalm Community bears no responsibility for the sources and origin of the data. We analyze and supplement the materials based on open source intelligence.