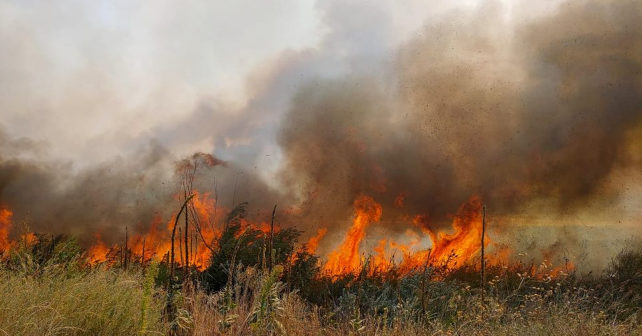 George V. Pinchuk, a volunteer of InformNapalm international intelligence community brings to the attention of our readers the English translations of social media postings illustrating subversive actions of the Russian occupation forces.

So much for September 2!

On September 2, 2014, Russia fired at us with all kinds of heavy fire from its territory, and today #2_September_2020, everything is on fire.

It started yesterday in a gray zone behind a demolished school building (many “thanks” for the withdrawal of troops), and today there is a fire in Bolotenny and Sizom.

These villages are right at the Russian border.

I am not hinting at anything, but I am very interested in why does it burn exactly where the Russian snout is sticking out?!

The photo was taken just now at the Olkhovsky dachas, in our yard.

Just now I found out that in the direction of the village of Kamyshny, behind the village of Yuganovka, there was a strong fire on the Russian side of the border.

All the locals agree that this is sabotage done by the Russian occupation troops.

This summer was very dry, but the fires all along the line of contact in the Luhansk Oblast began to rage simultaneously!

Moreover, all the arsons were made at the moment when the wind blew from the north, from the Russian side … Believe me, as I had the opportunity to study all the habits of the wild Russian horde over the last 6 years.

Let the two senile grandpas [Kravchuk and Fokin, the octagenarian “representatives” of Ukraine at the talks with the occupier troops. – G.P.] come here and grasp the real situation …

Units of the Joint Forces Operation and other units of the Ukrainian Armed Forces continue to fight fires in areas of the Stanychno-Luhansk and Novoaidar districts of the Luhansk Oblast. Also, the fight against wildfires takes place in two districts of the Donetsk Oblast, near Bakhmut and Yasynuvata.

The quantity of equipment and the numbers of the personnel involved in extinguishing and localizing these fires is sufficient for accomplishing this task. The Armed Forces of Ukraine, the State Emergency Service, the National Guard and the police are fighting the steppe and forest fires, working side by side. The operation is being carried out on a total of six sites, with a total area of about 200 hectares.

We are sad to report that Sergeant Artem Bondarenko, who was considered missing during the firefighting operations in Luhansk Oblast was found dead. The body of the serviceman was found under the rubble of a dugout. According to his colleagues, while they were extinguishing the fire, which was rapidly approaching the positions, Artem was trying to evacuate military property.

The Joint Forces Command expresses its deepest condolences to the relatives and friends of the fallen soldier.

Joint Operation Forces press center also stated in a recent dramatic video of the fire-fighting effort that there are signs of intentional arson from the side of the Russian occupation forces. These actions show their full disregard for the environment and the lives of Ukrainian citizens, fully disproving Russian propaganda talking point of “protecting the Russian-speaking population of Ukraine”.