Ukrainian paratroopers contain an avalanche of fire near Krasnohorivka. 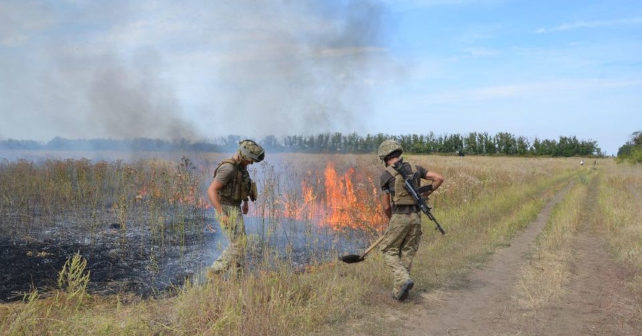 From the Headquarters of the Air Assault Troops of the Armed Forces of Ukraine:

Paratroopers contain an avalanche of fire near Krasnohorivka A fire broke out once again near the settlement of Krasnohorivka due to the brazen actions of the Russian occupiers. It started before dawn. According to the press officer of the Air Assault Troops (AAT) unit, Captain Oleksandr, at about 4:00 a.m.on 6 September 2020, a single RPG shot was registered at the observation post at a position near Krasnohorivka.

The grenade exploded in the field about three hundred meters from our position. A few minutes later, smoke billowed from the place where the grenade fell. The duty officer reported seeing the smoke near our trenches to his commander. The commander of the forward base ordered the personnel to take their positions according to the order of battle and be ready to engage the enemy. But around four in the morning the paratroopers were forced to start a fight.

This time, the had to fight the fire that reached the positions of the AAT unit because of the wind from the east.The personnel did not hesitate to localize the fire. The soldiers used shovels, picks and saws to stop the flames from spreading. Everyone acted decisively and quickly. At first it seemed that the fire was contained. But at eleven o’clock in the morning it flamed up with new vigor. The wind intensified and the fire reached even the trenches and dugouts. Firefighters arrived to help the servicemen. Extinguishing the fire was complicated by the fact that the flames spread through the mined areas and there was the danger of explosions of mines and other ammunition.

There was also the possibility that the enemy, taking advantage of extreme circumstances, could resort to other provocative actions. The command took all necessary measures to prevent this scenario. Additional fire-fighting equipment and tools were brought in. Despite the difficult situation, the military fully controls the dangerous section of the front line.

No Responses to “Ukrainian paratroopers contain an avalanche of fire near Krasnohorivka.”