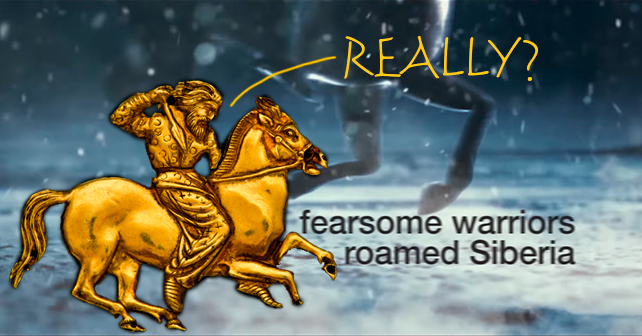 Is Crimea far from Siberia? A few thousand kilometers? Well, there could be an alternative take on it. In this feature, we will introduce the new view of the Russian Hermitage on history and geography.

At this moment, a large exhibition with an impressive title “Scythians: warriors of ancient Siberia” is being hosted by the British Museum. The event is jointly organized with the State Hermitage Museum in St Petersburg, Russia.

The roots of the exhibition lie in the conflict over Scythian gold, which started in 2014, after the annexation of Crimea. Russia wanted to seize Ukrainian exhibits sent to an exhibition in the Netherlands, but by the ruling of the Dutch court, Scythian gold was returned to Ukraine.

As St John Simpson, Assistant Keeper of the Middle East Department in the British Museum and the curator of the exhibition, wrote in his blog, the work on the exhibition devoted to the Scythians started in early 2014. That is approximately the time when the conflict over Scythian gold arose, and this timing makes the London exhibition look like a reaction of the Russians to this conflict. Therefore, the publicity value of the exhibition titled “Scythians: warriors of ancient Siberia” for Russia cannot be overestimated: it is an attempt to link the annexed Crimea with Russia through the history of the Scythians, creating the perception that Russia is the sole heir to the Scythian civilization.

Europeans are no longer surprised when Russian tries to appropriate not only foreign territories, but history as well. Just recently, Kyiv princess Anna became the cause of a scandal at the meeting of the presidents of Russia and France. However, we cannot let new attempts to falsify history go unchallenged, because they have become a mainstay in the information warfare waged by the Kremlin.

A large part of the exhibition consists of the treasures that were found in the territory of modern Ukraine and brought to Russia over a long period – from the reign of Peter I and until the collapse of the USSR. Apparently, Russia is now also extracting new artifacts from archaeological digs in the illegally annexed Crimea.

Read also our material #RussiaIsAThief, or what awaits the Crimean museums?

In the photos kindly provided to us by an exhibition visitor, we can see which Scythian artifacts are exhibited in London today and how they are labeled. 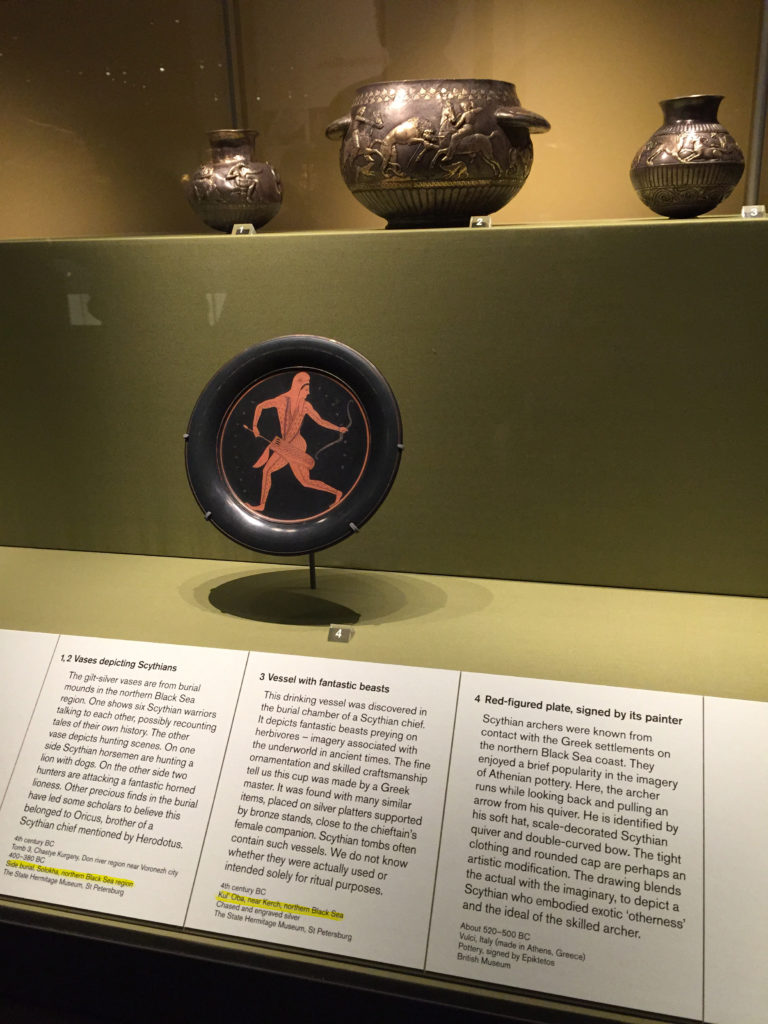 In some cases these descriptions are rather laconic. For example, for exhibits No. 2 and No. 3, the location of the find is generalized to the “Northern Black Sea region”. But it is not a secret for scientists that the first cup was found in the famous Solokha Scythian mound on the left bank of the Dnieper, near Kamenka-Dniprovska (Zaporizhia Oblast, Ukraine), whereas the vase was found in the Kul’ Oba mound near Kerch, in Crimea.

But for the exhibit No. 4, the organizers of the exhibition are much more generous with the details: the country where the artifact was found (Italy), and the place of its creation (Greece), and the property rights (the British Museum) are indicated.

By a “strange coincidence”, all incomplete labels belong to the objects that were found either in Crimea or in the mainland Ukraine. 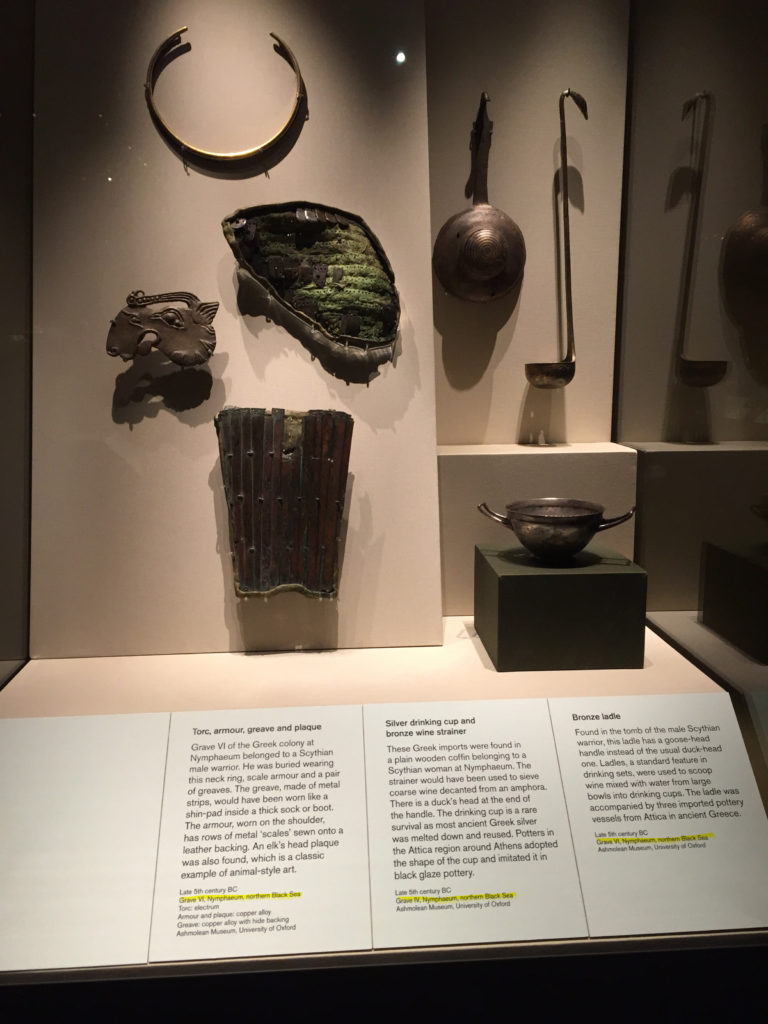 The exhibits above were found in Nymphaion, an ancient city located north of the modern settlement of Eltigen (Heroivske, near Kerch) and 17 km south of Panticapaeum. Once again, the exact location of the find – Crimean peninsula – is not specified. 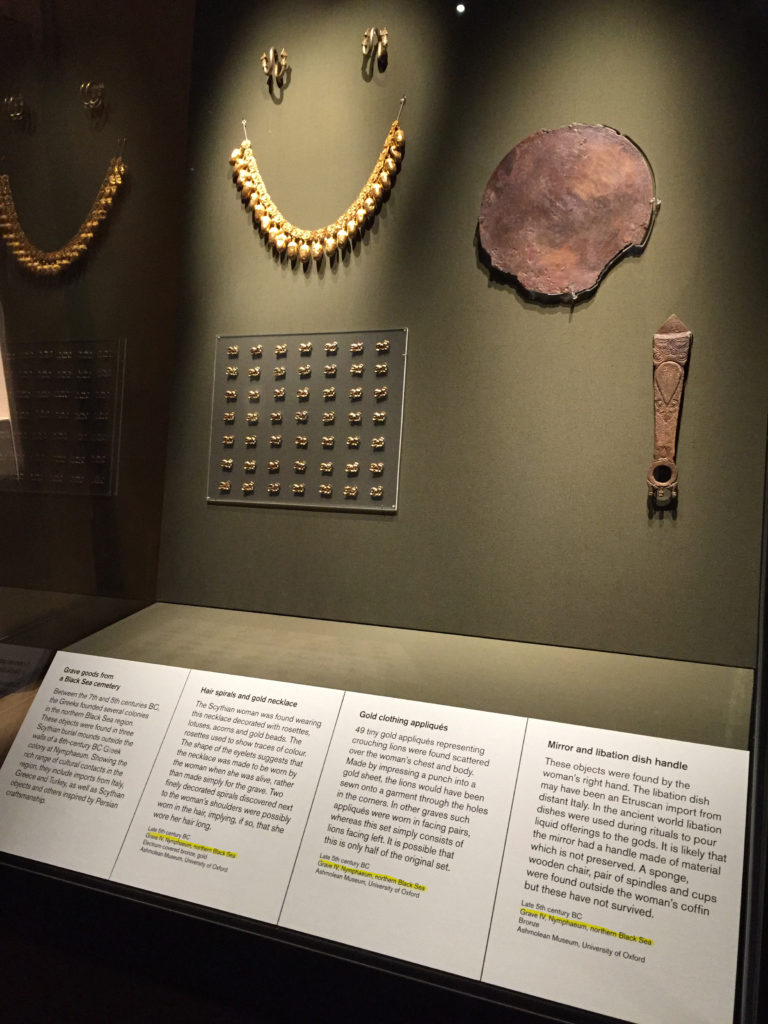 And here are some more finds from the Crimean Nymphaion. 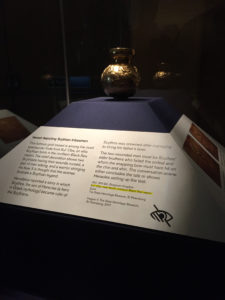 Note this masterpiece of Scythian culture, the famous ritual bowl from the Kul’ Oba mound. It was taken from Crimea to St. Petersburg in the 19th century, and now Russian “historians” prefer not to mention the Ukrainian Crimea in the description of the exhibit. 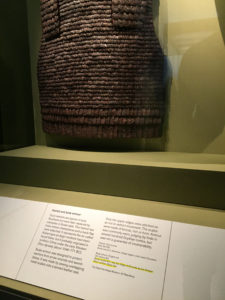 This armor, as you can guess, is also from the territory of Ukraine. A full description of the location of the find should look like this: kurgan 401, village Zhuravka (Zhurovka), Cherkasy Oblast, Ukraine. 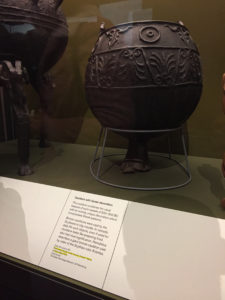 Here are items from the Plundered Grave (or Broken Grave) mound near Berezan in Kiev Oblast. The town is only 80 km from the capital of Ukraine and hundreds of kilometers away from the Black Sea, but for the Russians all this is an abstract “Northern Black Sea region”.

The British Museum has extensive coverage of the exhibition on its website. But if we look closer at the illustrations used by this respectable website, then we will see the same manipulations: the descriptions of exhibits mention only the locations of their storage, but not where exactly they were found.

Well, Russia’s desire to omit the origin of archaeological finds is understandable – it tries to uphold the validity of its claim to all lands populated by Scythians, many of which are in the territory of Ukraine. However, it is astonishing that all the posters of the exhibition about the “Siberian Scythians” feature an image of the artifact found in Crimea. After all, the peninsula of Crimea is more than 5 thousand kilometers away from Siberia. 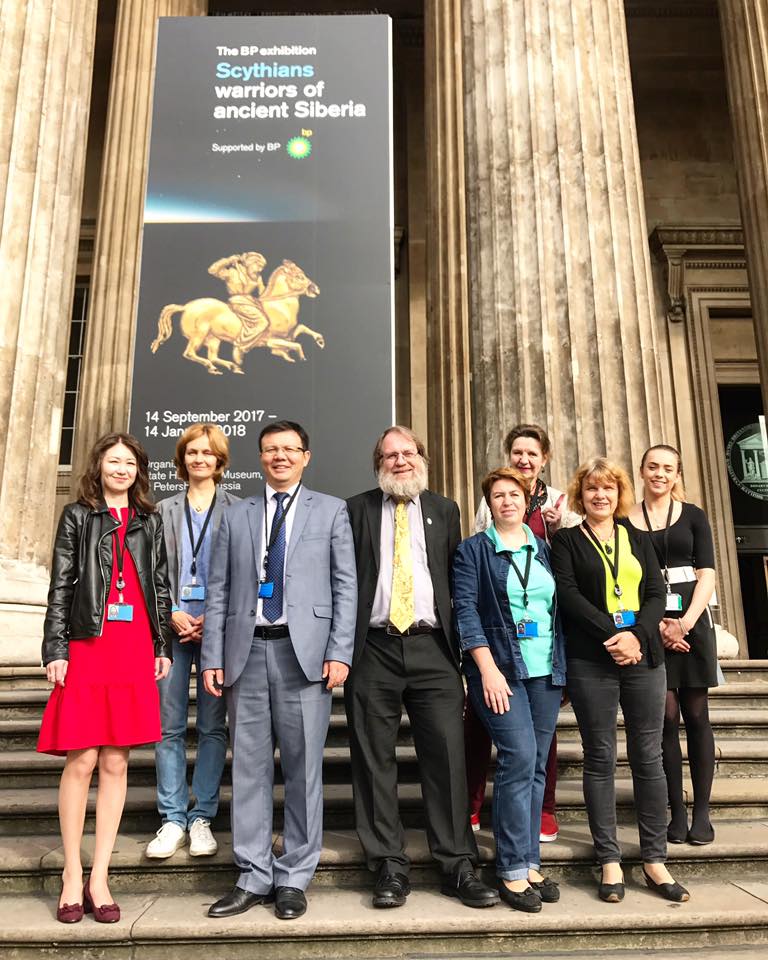 The golden horseman shown on the poster was found in 1830 in the Kul’ Oba mound (near Kerch) and was taken to Russia, where it is still kept. 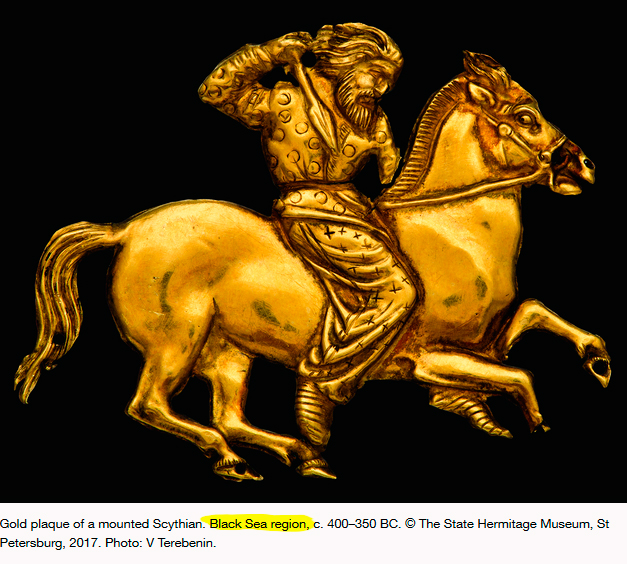 The location of the find is bashfully indicated as the “Black Sea region” – too broad a concept for true archeology.

In the catalog of the British Museum, this decoration with archers is thoroughly attributed: 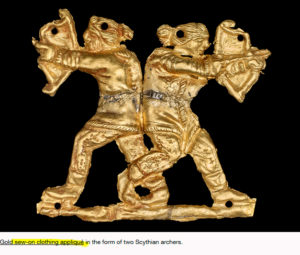 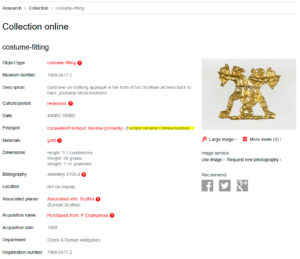 But there is no detailed description both at the exhibition and in the web site article. 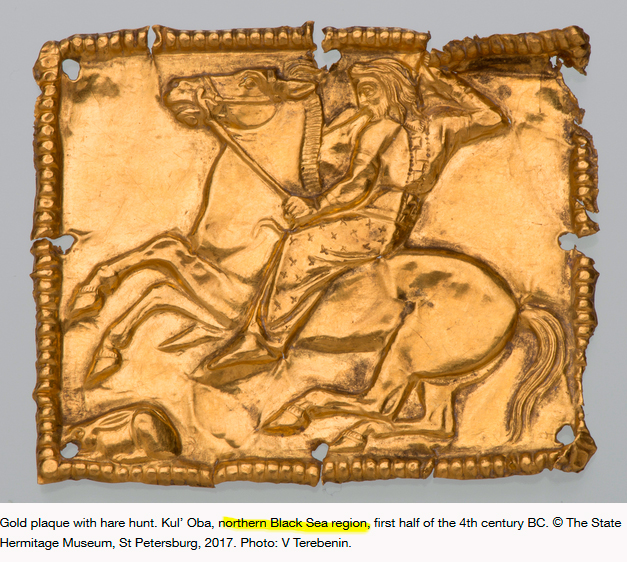 Apparently, the absence of references to Crimea and Ukraine is not an oversight, but a conscious, systematic approach. On the Hermitage website, all Ukrainian finds are also listed without any mention of the country of origin. 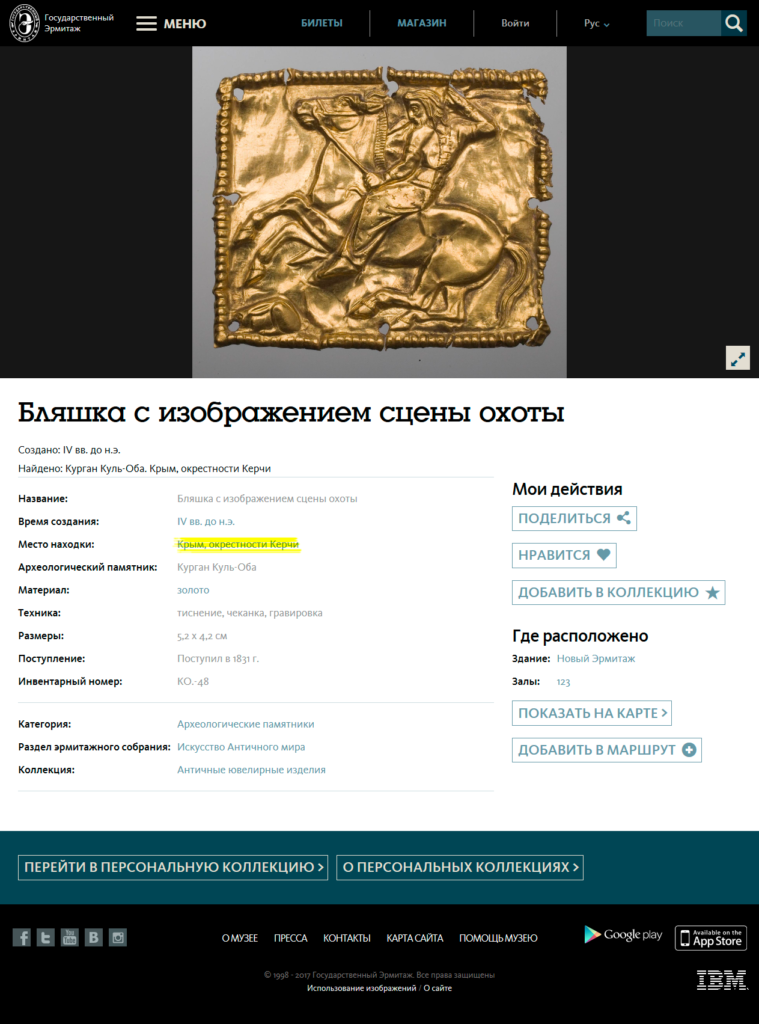 But let us go back to the exhibition catalog. In it, we see plates with the Scythian fraternization scene. 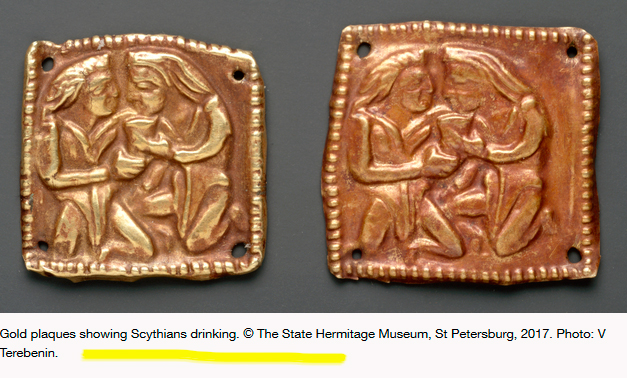 They were found in the Solokha mound (Zaporizhia Oblast, Ukraine, excavations of Nikolai Veselovsky, 1913). But only the storage location is specified in the directory – the Hermitage.

The exhibition is full of the items from the annexed Crimea and mainland Ukraine, but it looks like the Russians got a bit carried away in their fantasies about “Scythians of ancient Siberia”. In the beautiful exhibition catalog, you will not find a single word about the connection of Scythian history and culture to the territory of modern Ukraine. 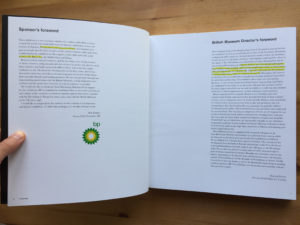 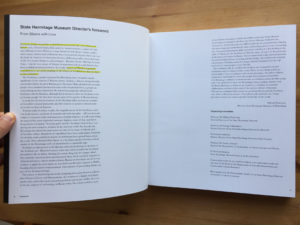 The annotation mentions only Russia and Siberia, which, to put it mildly, is misleading about the origin of the priceless Scythian treasures:

This book includes many rare and recent discoveries of personal garments and possessions made of gold, leather, fur and felt, revealing the legacy of one of Russia’s oldest indigenous civilizations. 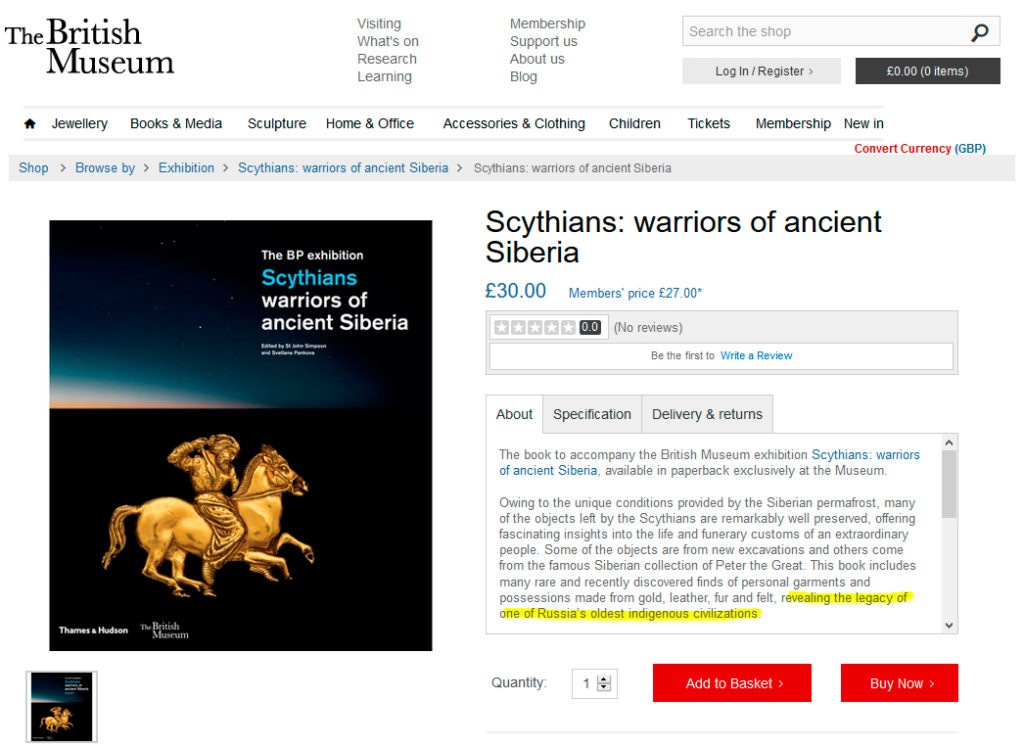 However, we should probably not be so surprised by this kind of selectivity, if we remember that the sponsor of the exhibition is British Petroleum, a company that merged with TNK in 2003 and is Rosneft’s property since 2012.

But let us have another look at the catalog of the exhibition about “one of Russia’s oldest indigenous civilizations”. 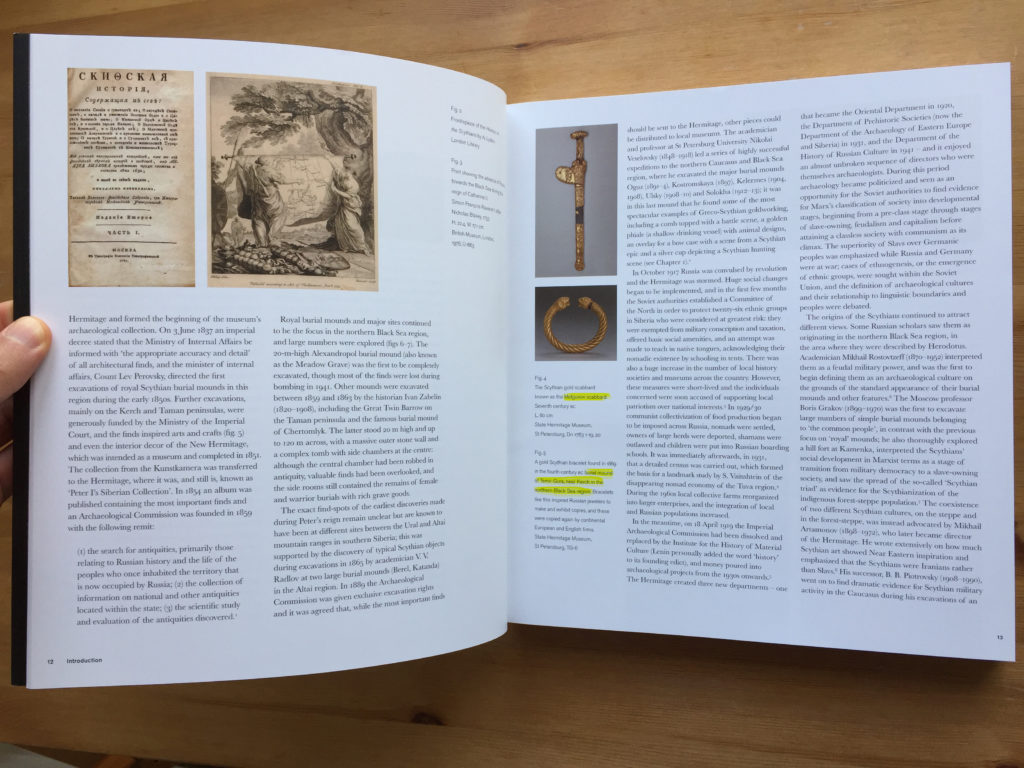 The description of the sword is again incomplete. The Melgunovsky Mound (Litoy Mound, Molded Grave) is one of the oldest Scythian burial mounds, the royal burial of the second half of the 7th century BC, discovered in September 1763 near the village of Kopany, Znamenka District of Kirovograd Oblast, Ukraine. This is practically the center of Ukraine, Russia chooses not to mention it.

And for the bracelet below, the exhibition organizers again “forgot” to indicate that it was found in Crimea. These are examples from just one page spread. And here is a very interesting map. 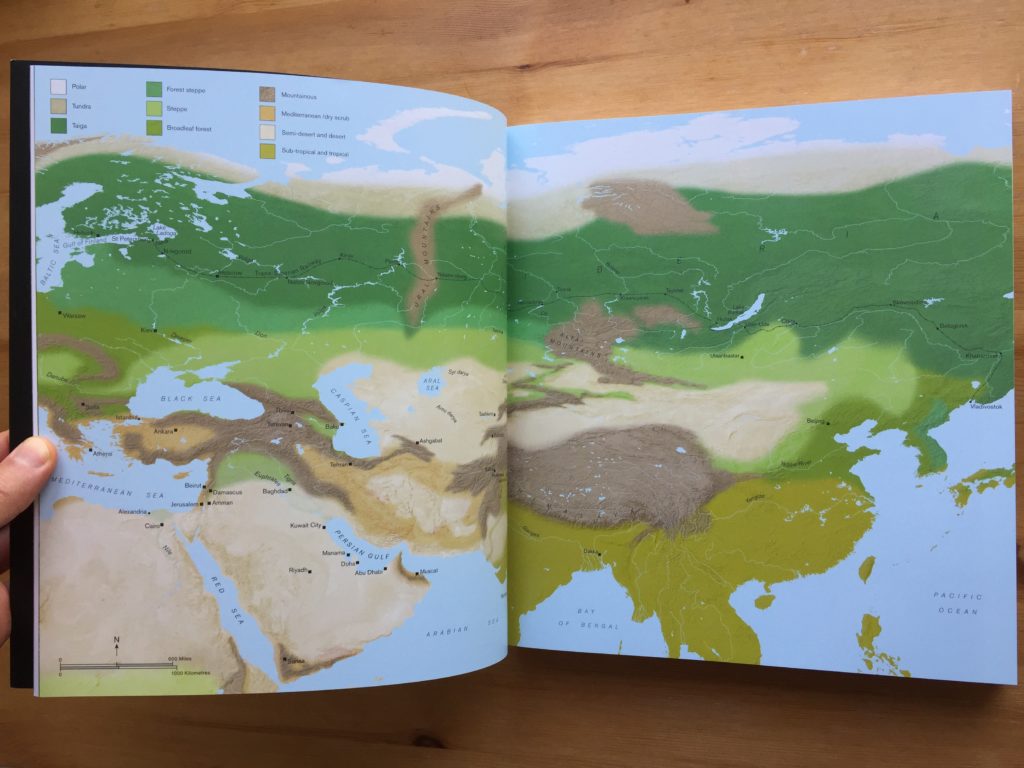 It is marked with climatic zones, the capitals of modern countries and the Trans-Siberian Railway. But the map does not show the modern borders together with the territorial spread of the Scythian civilization. Apparently, with such details the image becomes not so attractive for Russian propagandists. 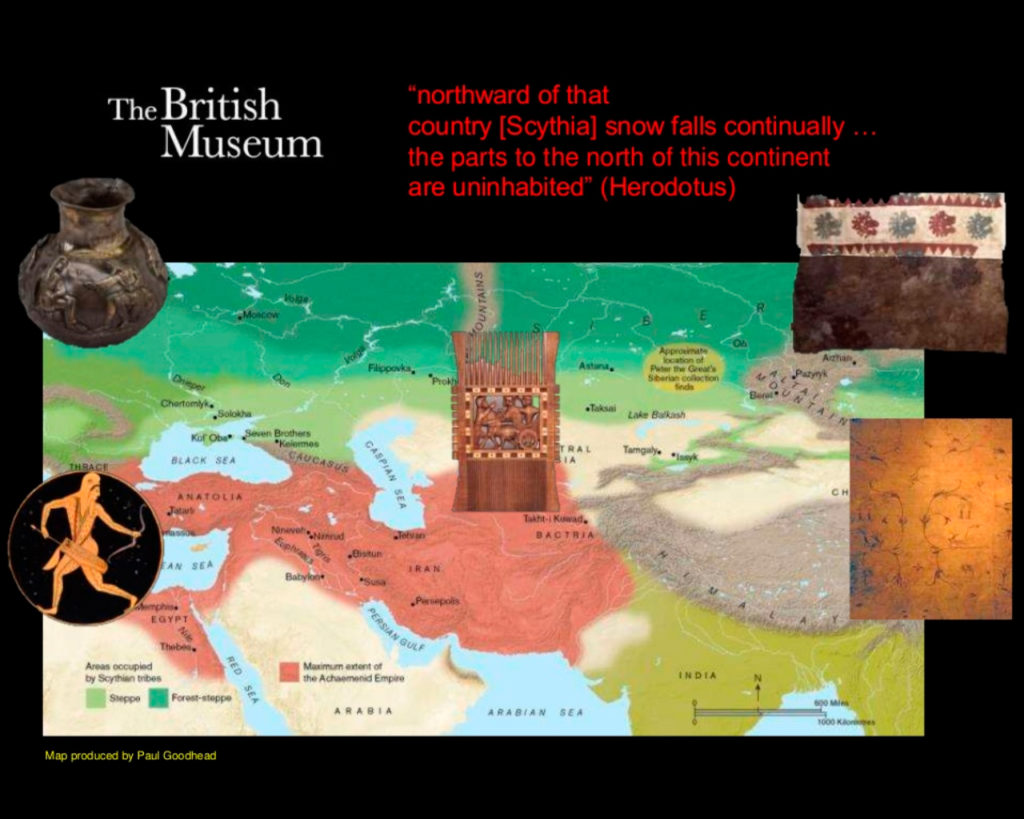 For the presentation on the British Museum website, a vessel from the Melitopol burial mound (Zaporizhia Oblast, Ukraine) was chosen as the cover image. 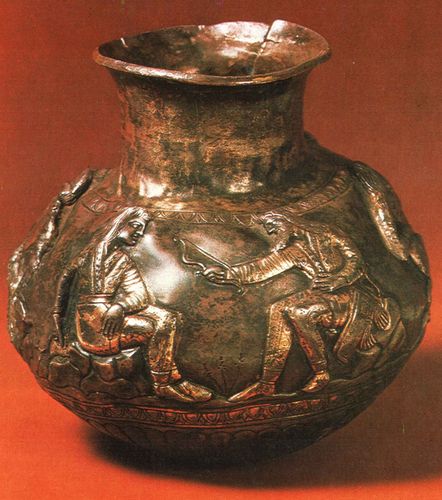 The article in The Times is illustrated by the famous find from the Kul’ Oba mound (Crimea, Ukraine). 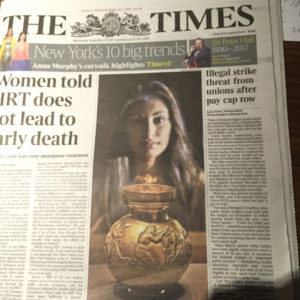 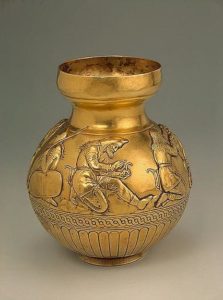 And so on… We will not describe all the exhibits of Ukrainian origin presented at the exhibition. The examples above are sufficient to show the reader the extent of the manipulation. The exhibition is full of Ukrainian exhibits, but you will not find in its materials a single mention of the Crimean Peninsula or Ukraine. These names are taboo.

It’s unfortunate that such esteemed institution as the British Museum has been forced to play by Russia’s rules.

However, the exposition also contains exhibits of truly Siberian origin (let us not forget that Siberia is a very large territory comprising different cultures and peoples). 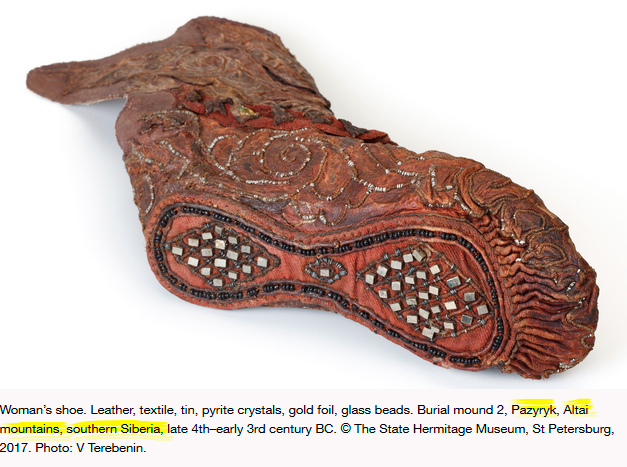 But many of the finds can only be conditionally called Scythian – almost all of them belong to the Iron Age Pazyryk culture (7th-3d centuries BC). Most of its objects were found in the Altai Mountains, and the Pazyryk people lived in the adjacent territories of modern Kazakhstan, Russia (Ulagan plateau, Ukok), and Mongolia. 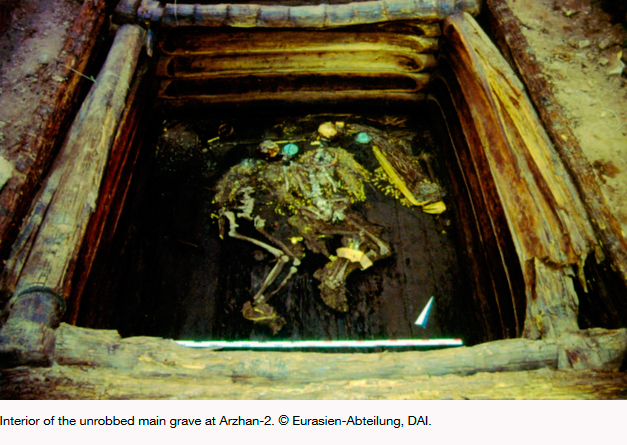 Finds from the Republic of Tyva from the burial mounds Arzhan and Arzhan-2 are referred to the exhibition as early Scythian. However, the very history of studying these mounds is quite curious. At the turn of 20th-21th centuries, a sensational find was made – a completely untouched burial of a Scythian chieftain (7th century BC). The treasures, of course, were taken to St. Petersburg, to the Hermitage. Only after many years the Tyvans were able to return most of the finds to a specially constructed museum in the city of Kyzyl.

In our humble opinion, one of the possible ways of returning treasures could be their transfer of ownership to our country as part of the reparations for the annexation of the Crimea and the war in the east of Ukraine. Of course, this can only happen after the return of Crimea to the control of Ukraine and the withdrawal of the Russian forces from Donbas.

The civilized world knows many examples of the return of relics to their historical territories. We think that this will be the case with some of the finds from the territory of Ukraine that are kept in the Russian Federation.

The exhibition is a success, and there have been numerous publications in the leading British and world media and authoritative blogs about the “Siberian Scythians” have spread widely. The interest is clearly visible on Google Trends .

And we can see Russia rather successfully imposing its interpretation of history on the world, in which Ukraine does not deserve a mention. An effort to counter these information policies of Russia should become a task for Ukrainian Ministries of Culture, Information Policy, and Foreign Affairs.

P.S. True “warriors of Siberia” can still be found today in the Ukrainian steppes. They often feature in our investigations. 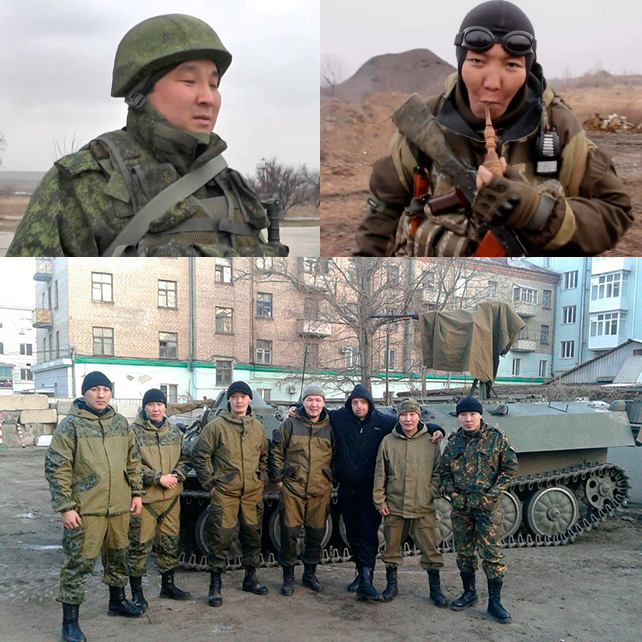 This publication was prepared by Lukyan Turetsky specially for InformNapalm.

An active link to the authors and our project is obligatory for any reprint or further public use of the material.
(Creative Commons — Attribution 4.0 International — CC BY 4.0)
Repost and share with friends.
For notifications about InformNapalm investigations follow us on Facebook / Twitter / Telegram.

No Responses to “Scythians hostage to Russians”