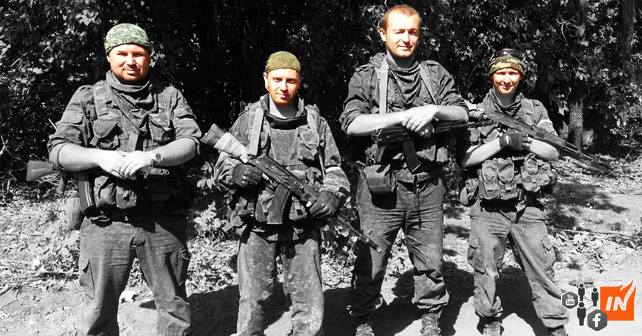 Informnapalm international intelligence community continues a series of publications containing information and visual evidence of the participation of the Russian Northern Fleet detachments in the fighting in the east of Ukraine. Today, four new war criminals will be added: three re-enlistees and one electronic warfare (EW) officer, who fought in the summer and fall of 2014.

The further into the forest, the fatter the “partisans” (Russian slang)

Further study and analysis of social media accounts of the previously identified ‘veterans of the Rostov-Ukrainian assignment’ from the 200th Motorized Rifle Brigade of Northern Fleet (see Soldiers of the Russian Northern Fleet in the Donbas in 2014, 20.09.2017) let us track other servicemen of the same unit who in the summer and fall of 2014 took part in the aggression against Ukraine.

In the photo album of one of them (№4 Yadovin), we found a series of photos showing a daily life of the military personnel from the 200th Brigade. We assumed that the several pictures with a hedgehog were very likely from the period of the Ukrainian deployment, in summer-autumn of 2014. These photographs helped us to trace the EW unit of this brigade and identify three contract soldiers and one officer. In the accounts of the newly-identified Northern Fleet servicemen, there are many photographs that prove their participation in the war against Ukraine. Also, they picture the modern Zhitel Р-330Zh station of interference (communication jammer), which we have repeatedly spotted in the Donbas. 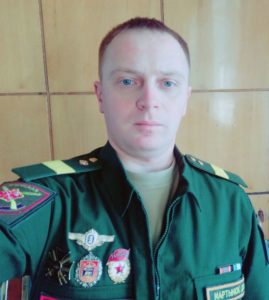 Born February 21, 1984 in the city of Olenegorsk, Murmansk Oblast. Graduate of the Tambov Training Center for the junior EW specialists. A long-term contract serviceman (over 10 years), Senior Sergeant. Participant in the Russian invasion of Georgia in 2008, as evidenced by photos and videos on his pages.

Martyniuk uploaded a few photos from the Ukrainian deployment into his VK profile in 2016. Among them are valuable pictures of Russian servicemen against the backdrop of the EW equipment, apparently taken in the occupied part of the Donbas. They pose in the combat dress (equipment, bandanas, straps on rifle butts) and with white armbands (identifiers of Russian aggressors).

Photographs from the Martyniuk’s second profile in the OK social network (including the same photos with white armbands uploaded in early September 2014) confirm that they were taken during a period of active hostilities at the end of summer and early autumn of 2014. Earlier in July, Martyniuk uploaded some photos showing the stele in the city of Donetsk, Rostov Oblast, as well as a snapshot of EW equipment on combat duty with a comment “Gukovo” – the town on the border with Ukraine. 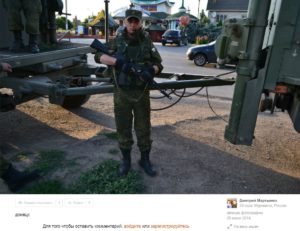 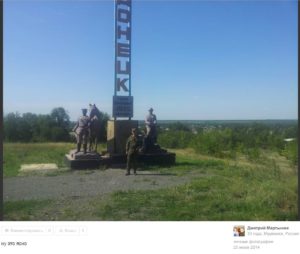 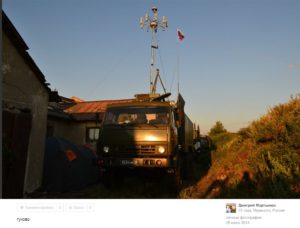 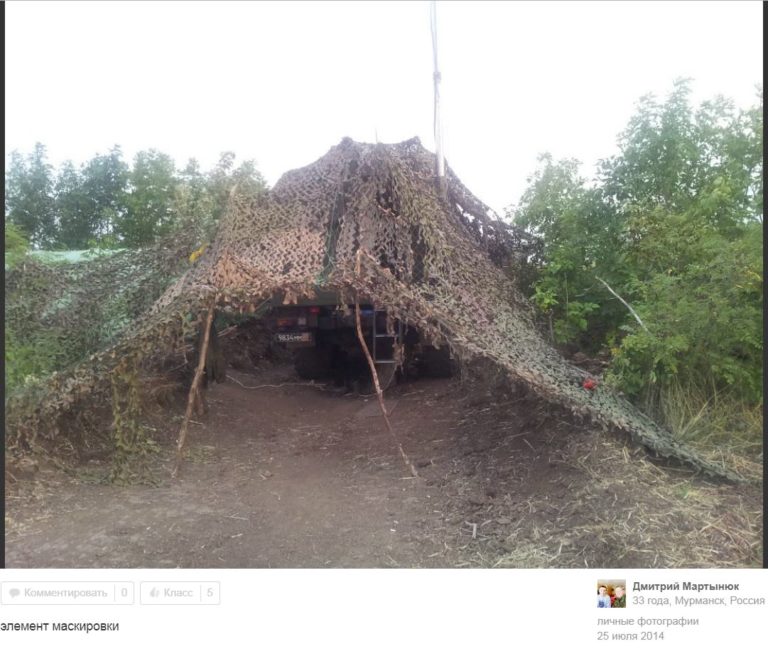 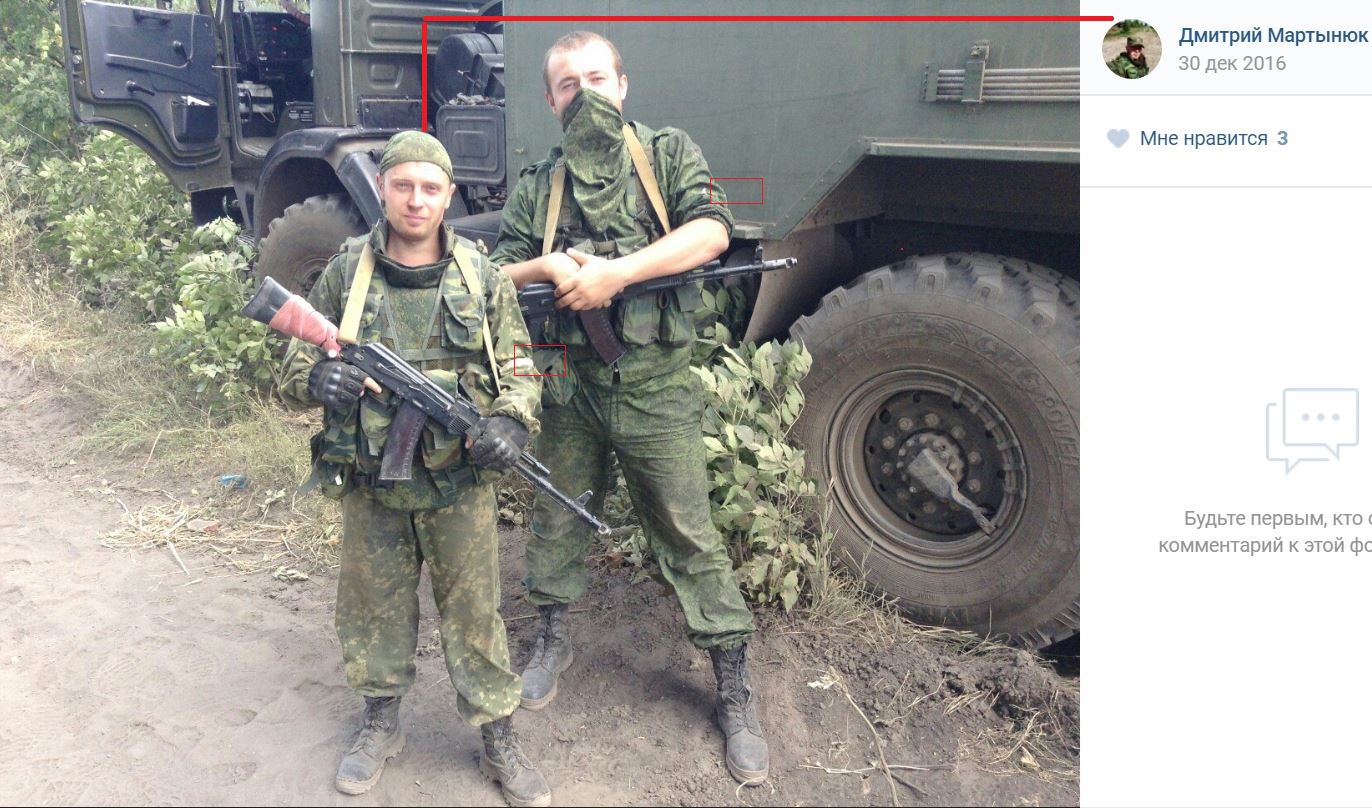 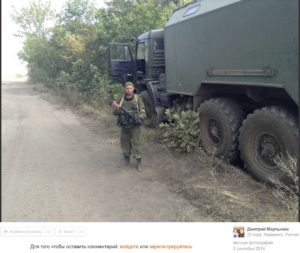 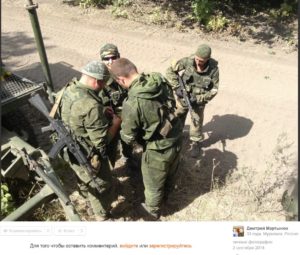 After obtaining a strong evidence of Martyniuk’s Rostov-Ukrainian deployment in 2014, let’s look at his colleagues – other servicemen of the EW unit, identified in his group photos: 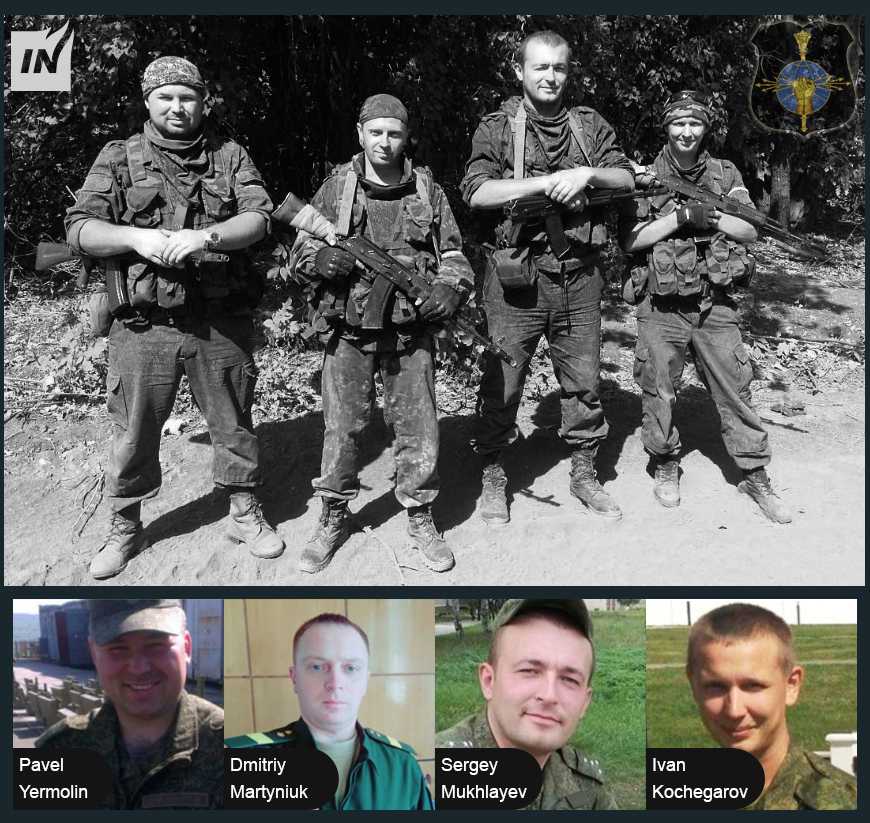 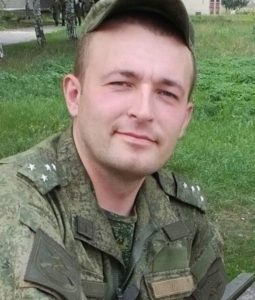 Mukhlayev’s sister Marina Kaufman (archives of the account, album, contacts) lives in the hostile to Russia United States of America, as indicated in her account, as well as comments to the photo and posts of their father Vladimir Mukhlayev.

Some of Mukhlaye’s photos posted in 2016 show him wearing awards (1 and 2). It is reasonable to assume that the Russian Ministry of Defense Medal “For Military Valor of the II Degree” was awarded to him for his Rostov-Ukrainian deployment in 2014.

But the most noteworthy are the photographs of Captain Mukhlayev posted in the album of above-mentioned Sergeant Martyniuk, including ones taken on the border with Ukraine in Gukovo, Rostov Oblast, and directly in the territory of Ukrainian Donbas. 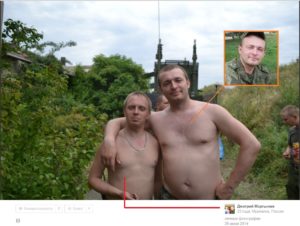 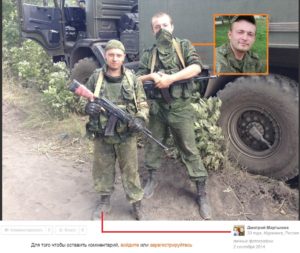 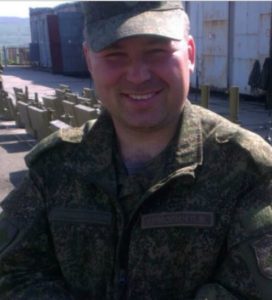 From the city of Murmansk. His rank is Warrant Officer. Hides under the nickname Karabas Barabas, which did not prevent us to establish his identity, first of all due to the diligence of his mother, as well as other relatives: girlfriend, sister, and brother-in-law, and hockey.

In social networks: VK (archives of the account, album, contacts), photos of Yermolin in the album on the OK account of his mother Natalia Ermolina (Kokhanovskaya). 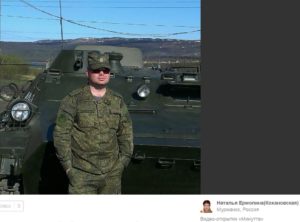 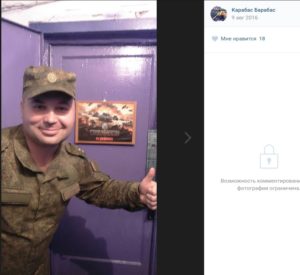 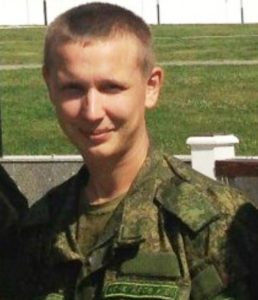 Born October 9, 1985 in the town of Pechenga, Murmansk Oblast. Identification of Kochegarov was difficult because he does not have any active account in the social networks. There is only one profile in OK in his name and that contains only his birth date and place of residence. However, as in the case of Yermolin, we found photos of Kochegarov in the albums of his relatives: his wife Alexandra Kochegarova (archives of the account, album, contacts) and sister Antonina Minakova-Kochegarova (archive of the album). 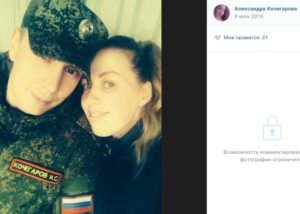 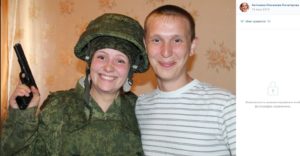 We would like to remind you that in May 2017 InformNapalm identified EW servicemen of the 19th Motorized Rifle Brigade (military unit 20634, Vladikavkaz, North Ossetia, South-Eastern Military District of Russia), who were transferred to the Ukrainian border in summer-autumn of 2014 as part of the battalion tactical group to support the invasion of the Russian army.

The Tour of Duty of the 200th Special Purpose Separate Motor Rifle Brigade of the Northern Fleet of the Russian Navy in Rostov Region and in Ukraine, 2014-11-26

The Tour of Duty of the 200th Special Purpose Separate Motor Rifle Brigade of the Northern Fleet of the Russian Navy. Rostov oblast and Ukraine. Part two. Camp, 11/26/2014