Situation report on global security as of April 28, 2017 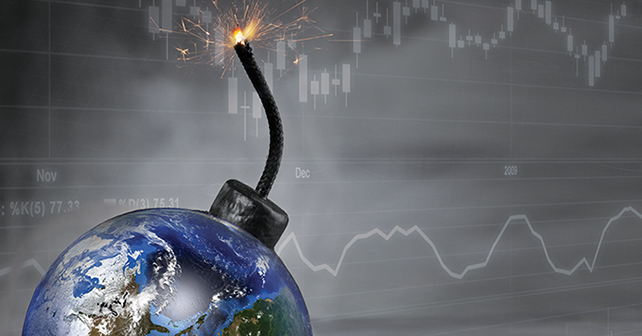 We are going to review the facts that, in our opinion, are important to take into account when monitoring the situation in the context of the new global challenges of the hybrid and conventional war. Today, the Russian Federation acts as the main aggressor, which challenges the entire system of world security in Europe and the Middle East. It uses hybrid methods of war to achieve controlled chaos in various regions of the world. The second player with an aggressive position is North Korea, whose regime is supported by the Russian Federation.

As reported by Agerpres.ro, on Monday, April 24, four Typhoon fighter aircraft from the British Royal Air Force landed at the Mikhail Kogalniceanu military base in Romania. Starting May 1, they will begin patrolling the Romanian airspace. The mission will last until early September. A detachment of 150 personnel will carry out security monitoring tasks in the Black Sea region on the eastern borders of NATO in conjunction with Romanian MiG-21 Lancer aircraft.

The North Atlantic Alliance is strengthening its control over its eastern borders from the Baltic states to the Black Sea as a response to the so-called Zapad-2017 Russian-Belarussian military exercises scheduled for September 14-20. Maneuvers will be held simultaneously on several military training grounds in Russia and Belarus: it is believed that about 100,000 troops will participate. This will make the Zapad-2017 the biggest war games held by Russia since 2013. And we remember that then after the exercises, in the spring of 2014, the annexation of the Crimea followed. 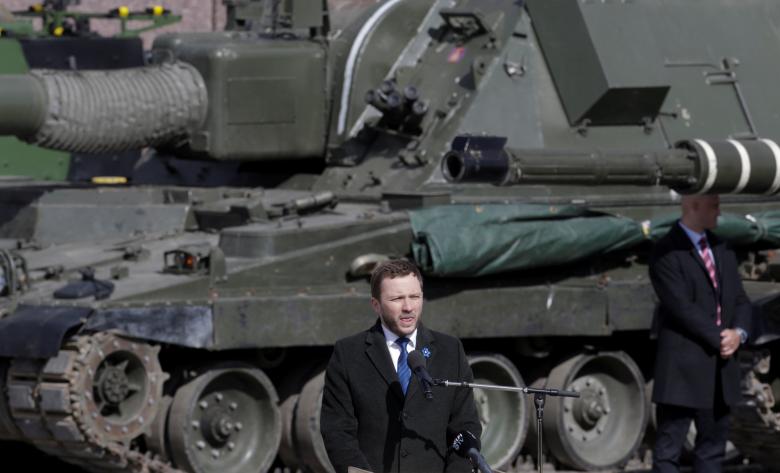 On April 27, Estonia’s Defense Minister Margus Tsahkna said that Estonia and other NATO countries have intelligence on possible actions of Russia in Belarus. He stated that Russian troops may stay in Belarus after the completion of the exercises, and for them, “it is a one-way ticket,” Reuters reported

Estonia also intends to create backup copies of the databases of all major Estonian registers by the end of the year and place them on secret servers in Luxembourg. The so-called data embassy is being created by Estonia as a precaution against military aggression and occupation, Pealinn.ee reported on April 27.

On April 28, the largest national military exercise Strike of lightning (Žaibo kirtis 2017) started in Lithuania, according to Delfi.lt. More than 3,000 servicemen, 200 policemen, 200 representatives of other law enforcement agencies, and about 2,000 reservists are going to take part in the exercise. The chief of the joint staff of the Lithuanian army, Major-General Vitalijus Vaikshnosaras said that the exercise will simulate various unconventional situations of the hybrid war.

According to UNIAN, the Russian occupation forces continue shelling Ukrainian positions along the entire demarcation line, using 120mm and 82mm mortars, IFV, grenade launchers, heavy machine guns, and small arms.  A Ukrainian website Infolight daily presents maps showing types of weapons, place and time of shelling. Almost every day the headquarters of the Anti-Terrorist Operation (ATO) reports about new Ukrainian military and civilian victims of shelling by Russian terrorist forces. The Ukrainian servicemen get killed and wounded in the front line, while restraining the aggressor on the eastern borders and preventing the advance of the occupying forces to the rest of Ukrainian territory.

Russian special services continue their attempts to destabilize the situation in Odessa and Mariupol on the eve of the anniversary of the events of May 2, 2014 and the Day of Remembrance of those killed in World War II.

At the same time, in occupied parts of Donetsk and Luhansk Oblasts of Ukraine, the Russian occupation forces continue to pull down arms and equipment under the pretext of preparing for the May 9 parade. Among the military equipment that got into the propaganda stories on April 25, volunteers from InformNapalm international intelligence community identified relatively new types of equipment that have never been used by the Ukrainian Armed Forces and could not have been taken from them. The InformNapalm database already contains 43 types of Russian equipment (see Google spreadsheet v1.7), identified in the arsenal of the DPP/LPR terrorist groups and the Russian occupation forces in the Donbas.

The Balkans is yet another front of the hybrid war 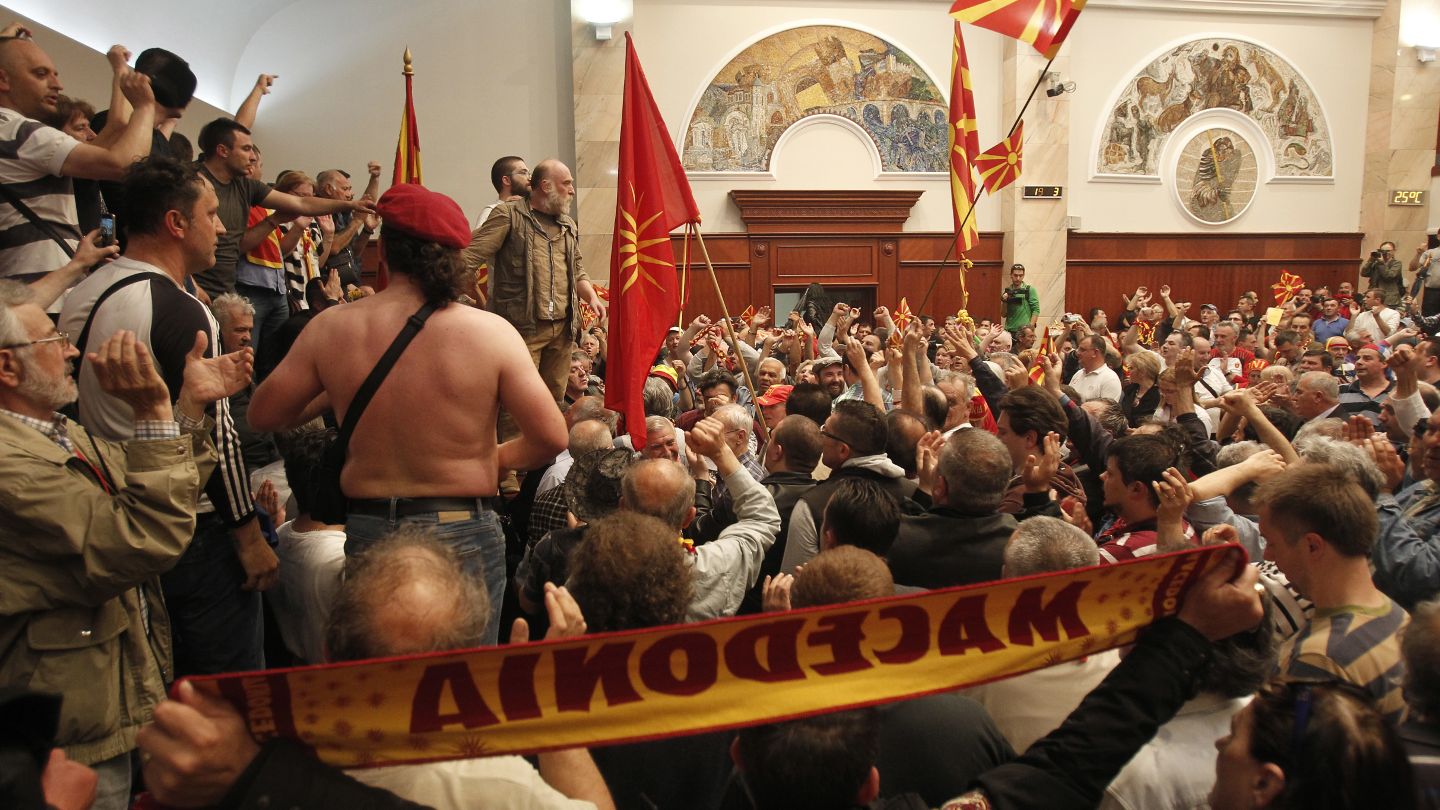 The situation in the Balkans causes a concern: the incitement of the conflict in this region has long been in the interests of Russia. On Thursday, April 27, protesters against the election of an ethnic Albanian Talat Haferi broke into the Macedonian Parliament. It is reported that during the storming of the parliament 77 people were injured, including 22 policemen and three Macedonian deputies.

Reva Goujon, vice president of Global Analysis for the US analytical intelligence company Stratfor, in an interview given to Apostrof, at the end of March, stated the Balkans was a suitable place where Russia could stir up a new conflict to destabilize the situation in Europe.

The attempt of a coup in Montenegro on October 16, 2016, which the mixed group of citizens of Russia, Serbia and Montenegro tried to implement, makes us think about the role of Moscow in the next round of tension in the Balkans. Let’s remind, that Montenegro’s special prosecutor Milivoje Katnic directly accused the Russian special services in the failed coup. Perhaps Macedonia has become another target in the geopolitical ambitions of the Kremlin.

The Middle East is a large-scale battlefield

As reported by Reuters, on Thursday, April 27, an Israeli strike hit an arms depot in Syria near Damascus airport. The depot was used by the Lebanese group Hezbollah, the militants of which, together with Russian and Iranian forces, support the regime of Bashar al-Assad in the fight against the Syrian opposition. An intelligence source said that regular supplies of weapons from Tehran are sent by commercial and military cargo planes.

Recall that in October 2015, InformNapalm presented evidence that Russian military aircraft flew to the Iranian airbase Hamadan, where Russia, in violation of the resolutions of the UN Security Council on the arms embargo, supplied armament and ammunition for further shipment to Syria. Perhaps Russia continues to supply arms to Hezbollah in 2017.

On April 27, after an Israeli strike on the depot, am unmanned aircraft invaded Israel’s airspace from Syria. It shot down by the Patriot air defense system which intercepted the target over the Golan Heights, Haaretz writes.

According to Censor.net, in coming days, Russian occupants plan to hold the St. George’s ribbon rallies in the cities of Aleppo and Latakia where earlier massive air strikes by the Russian Air Forces killed many civilians.

Let us remind you that using the propaganda stories of Russian media, InformNapalm have identified 116 crew members of the Russian Air Forces who participated in the deadly bombardments of the Syrian opposition and civilians.

According to Ukrinform, on Thursday, April 27, U.S. ambassador to the United Nations Nikki Haley during the meeting of the UN Security Council on the humanitarian situation on Syria made a sharp statement against Russia because of its support of the Assad regime. Russia, using its right of veto, “continues to cover for a leader who uses chemical weapons against his own people,” Haley stressed. “Assad continues to do these things because they know Russia will continue to cover for them,” said Haley.

US President Donald Trump, in an exclusive interview with Reuters said there was a danger of a “major, major conflict with North Korea”, while he stressed that he preferred a diplomatic solution. Trump noted the positive role of China in resolving the conflict with North Korea: according to the US president, the Chinese leader Xi Jinping “is trying very hard.”

At the same time, North Korea continues to provoke a full-scale war. According to The New York Magazine, on Thursday, April 27, North Korea released another propaganda video that shows a simulated e xplosion of the U.S. Capitol in Washington.

Prepared by Roman Burko specially for the readers of InformNapalm.org

(CC BY 4.0) The information was prepared specifically for the InformNapalm.org website, when you reprint and use the material, an active link is required