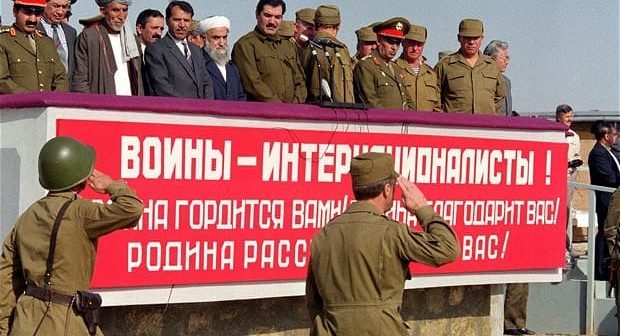 In December 2017, Russia’s president stated once again that the Russian army had won a victory in Syria, and they would start withdrawing their forces. Ironically, Vladimir Putin had spoken to the Russian military at the Khmeimim airfield, and in 20 days the airport was fired upon by unknown Islamist militants.

The press did not immediately understand what kind of weapons were involved because just the day before the militants had published a video of their shooting down an L-39 with Strela-3 MANPADS. 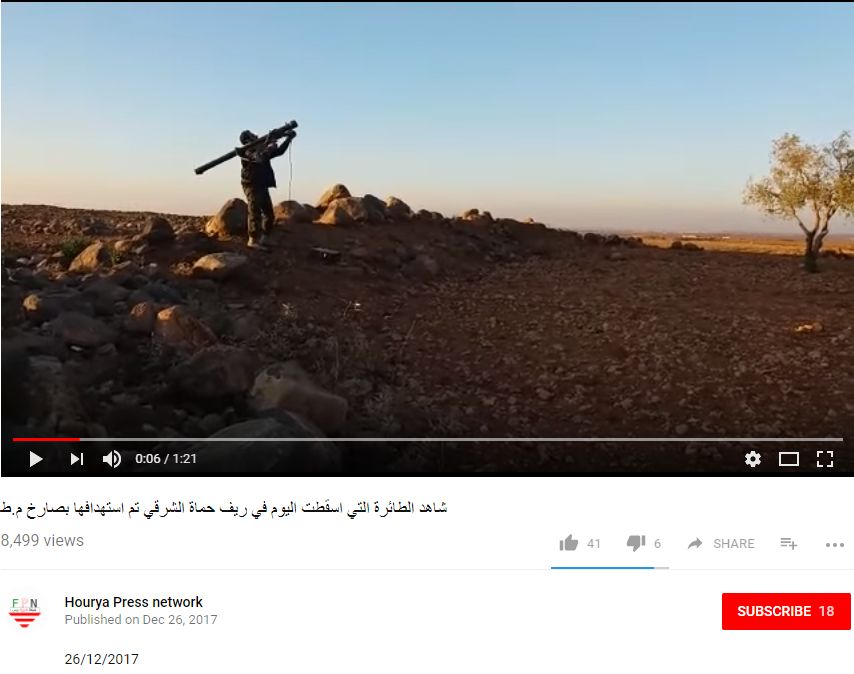 The Islamists used to shoot down Syrian air force planes, which are becoming fewer and fewer. Just like their pilots are. But this time they were shot down demonstratively with MANPADS as if getting a message across to the Russian airforce. Notably, the MANPADS had an external power supply with a wire running all the way to the ground. Apparently, the battery failed because of its old age. It is not clear if this was an item from a new delivery of old MANPADS from abroad or a one from Assad army’s stockpile. Also, this way of launching limits the mobility of an anti-aircraft group, but if one knows roughly where Russian aircraft are landing or maneuvering, then both Russian planes and helicopters can be shot down.

Zakharova also commented on the found weapons made in Bulgaria ranging from artillery shells and grenade launchers to shells for the Grad MLRS. This is not the first time that rumors about Bulgarian weapons appear in the media, but this time several events coincided in the range of a few days—Islamists with MANPADS, Grad ammunition made in Bulgaria, attacks on Khmeimim.

Thus, 2017 ended for the Russian army in Syria with the exemplary beating. On December 31, there were reports about a downed Russian Mi-24 helicopter. According to some, the helicopter malfunctioned; according to the others, it touched a power line. Be it as it may, two pilots died, but the Russians reported this news only after the New Year holidays on January 3. The year was ordered to finish on a positive note.

However, the Khmeimim airfield was shelled while the Russians were listening to the President’s familiar New Year line of “it has been a difficult year…” accompanied by the chiming bells. However, they only found out about it on January 3 from Kommersant newspaper. Nevertheless, the discussions of the incident itself, the loss of aircraft, the killed and injured started even earlier in social media.
Early on January 4, the reports referred to the “mortar” fire, and the death of two soldiers because of the shelling was acknowledged. Any rumors about the loss of aircraft were denied.

Soon thereafter, the version with mortars faded into insignificance and reports started mentioning an assault with DIY drones. And the other day the Russian military allegedly destroyed another IS headquarters, or rather the group of “the same subversives” who had attacked Khmeimim.

In parallel, some media and experts raced to speculate of even greater losses of the Russian army, whereas others vehemently denied them. They threw in the images of damaged Russian aircraft, a burned S-400 unit, and missiles fired by Islamists. Some experts did not believe that shelling had ever taken place because none of the locals recorded any videos of a mushroom cloud or plumes of smoke from the burning equipment.

However, this is not Hollywood, where any collision results in a spectacular mushroom cloud. In reality, a few mortar rounds shredding the body and internal components of the aircraft with fragments, would suffice. And there wouldn’t be any mushroom clouds for external observers to see. Nevertheless, even this attack was enough to kill two servicemen and wound several more (according to comments on social media, 9+ people were wounded).

Notably, photos of the IL-76MD Scalpel-MT flying hospital were were posted on the web only on January 3. Apparently, the severely wounded had to wait either for New Year celebrations to end or for an opportunity for the aircraft to land in Khmeimim again.

In particular, there were reports on January 5, that the Il-76MD had been unable to land in Syria and had to return to Sochi. Coincidence? Or was there a tip-off that the situation around Khmeimim did not allow for landing on this airfield?

On a separate note, it would be appropriate to mention that Khmeimim airfield is located in the Assad-friendly province of Latakia, 15 kilometers away from the city of the same name. It is a former civilian airport that the Russian military were compelled to use for want of a better option. It has no protective shelters for the military equipment, so most of the Russian air group is camped out in the open. 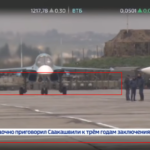 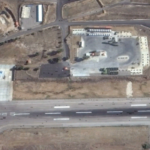 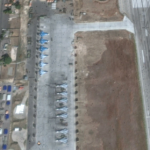 The ammunition is stored along the perimeter—it is delivered from there to rearm the aircraft for new flights. To make sure that the airport is fully protected, one needs to monitor the entire perimeter and roads going into nearby cities and villages. The inner line of defense and checks is manned by the Russian military, while the Syrian army is working at the remote approaches and roadblocks.

However, the situation gets complicated because, while nominally this is the historical homeland of the Assad clan, the Alawite and Sunni settlements are interlaced with one another. An Alawite village borders a Sunni one, and lands settled by Turcomans, who are in opposition to the Assad regime, lie to the north. To the east of Latakia and Khmeimim, there is a mountain mass running up to the border with the province of Hama. While the areas adjacent to the airport and the coastline are more or less flat and can be controlled visually, the more remote approaches need to be controlled by numerous roadblocks and patrolling helicopters. And, in fact, this is the problem—a sabotage group of Islamists can approach the airfield both from the sea or from some Sunni village, from sprawling suburbs of Latakia or from the hilly eastern part of the province.

It was actually the reason for the massive outcry in response to the first “mortar-shelling” version offered by the Russian Ministry of Defense because it would mean that Islamists had been within several kilometers of the Russian base.

On the other hand, Russians were weary of the Islamists gaining possession of Grad shells made in Bulgaria, as portable single-unit Grad-P systems with its numerous modifications have been in use in Syria since a long time. These systems are hardly accurate, but their presence means that Russian army has to expand the Khmeimim protection radius by dozens of kilometers. One successful hit with Grad missiles would spell an end to Russia’s military campaign in Syria. And there have been numerous Grad-equipped gun trucks traveling all around Syria for many years. 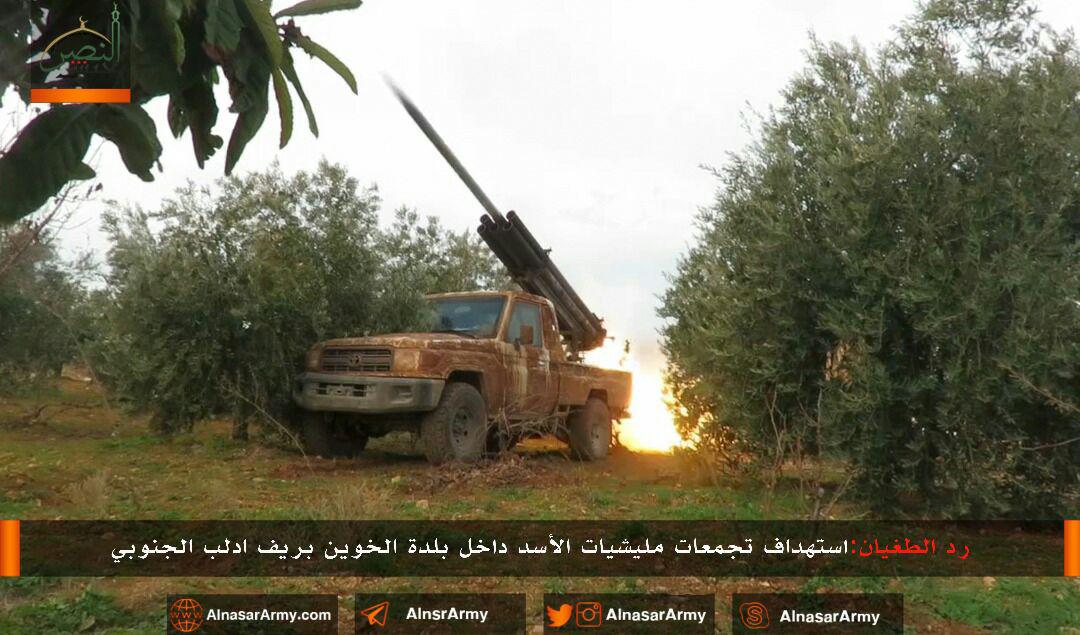 However, in addition to Grads, Iran’s licensed 106-mm M40 can also work on Khmeimim. 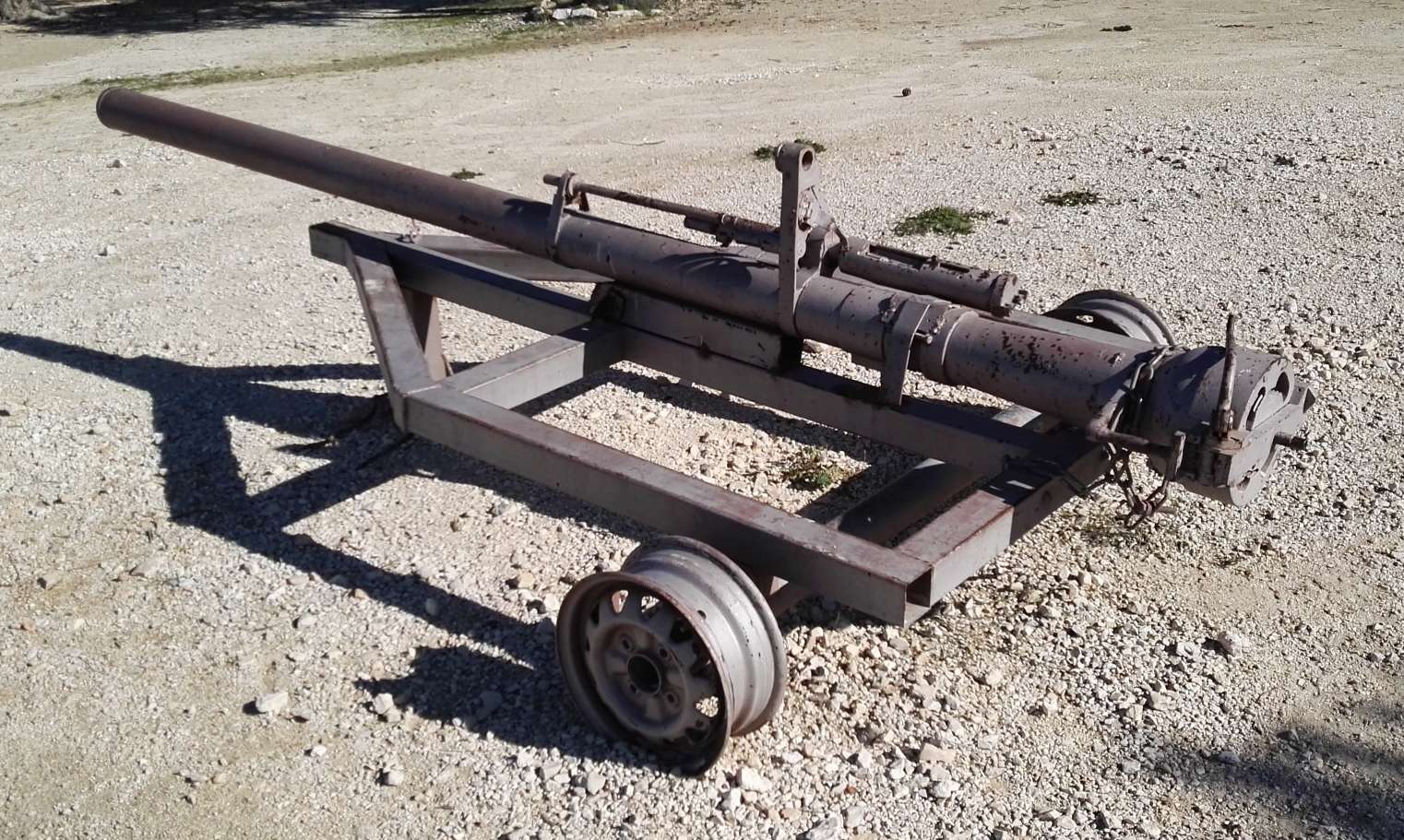 The use of DIY (almost plywood) drones makes matters even worse because Russians’ expensive anti-aircraft defenses are unable to deal with them. Some of them can be downed in the area nearby, but others will still be able to reach the airfield, as it apparently happened on December 31, 2017. Small targets carrying little payload are very challenging for the traditional air defense systems, they stretch the perimeter of defense even more. 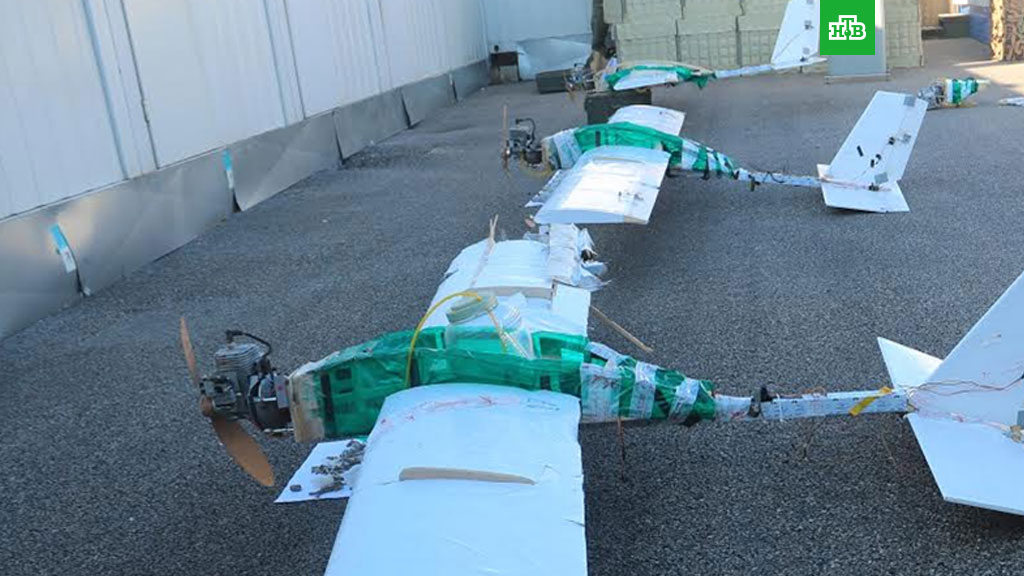 And one should not forget about MANPADS which from time to time fall in Islamists’ hands. A Russian IL-76 can be easily downed on approach to Khmeimim, if Russians fail to abide by some tacit arrangements, or if someone decides to show them who the boss is in the Middle East.

The downing of the Russian military transport aircraft would hardly upset anyone in Ukraine. When Russians wanted to turn the tide in the area of ​​Luhansk airport in June 2014, they shot down a Ukrainian Il-76 with paratroopers without any scruples. Now the militants are in position to pull it off against the Russians. The first downed Russian transport is a matter of time, and people at the Russian base must be aware of it.

It is becoming painfully obvious: it would have been wiser not to enter Syria at all. Now, the Russian forces in Syria have found themselves in a stretched situation when they are forced to defend several footholds all over Syria. There are 65 kilometers between the port of Tartus, where Russians unload their equipment and ammunition, to the Khmeimim airfield, where the Russian air force group is quartered. All convoys along the way must be escorted; roadblocks need to be set up at approaches to all the main bases. For instance, the distance from Latakia to Aleppo, where a battalion of military police from Chechnya was posted, is more than 200 km. There are also Hama, Homs, and Palmyra—and there is already a tradition of handing them over to Islamists every year. 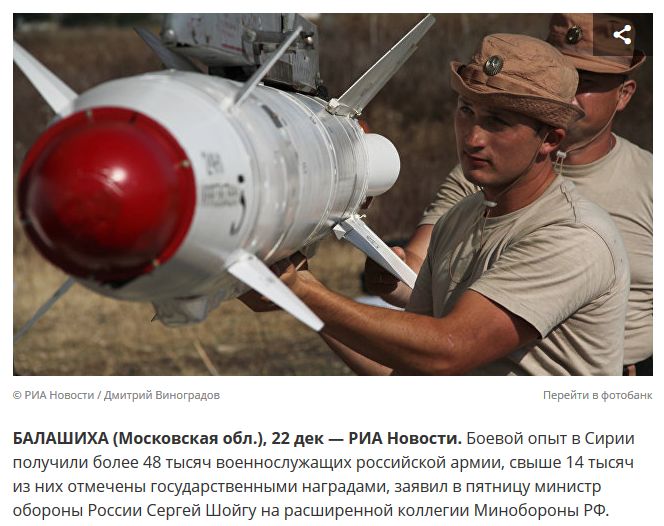 This is the reason behind Shoigu’s unexpected statement that “more than 48,000 servicemen of the Russian army obtained combat experience in Syria.” It took two and a half years to reach this figure. And it is worth keeping in mind that this figure does not include the numbers of the Russian PMCs operating throughout Syria at the forefront.

There is a reason for the Russian authorities not to specify the whole strength of their forces in Syria, because most Russians will hardly like the figures. At least several logistics and support battalions are needed just to maintain the current presence, and several more battalions are required to guard pilots and aircraft. And all of them have to be rotated at least every three months (so the number should be at least doubled). Moreover, some ships of the Russian Navy have been turned into bulk carriers for the delivery of ammunition and supplies to the port of Tartus. And Russia’s military transport aviation is the only lifeline supporting the operation of the Russian forces on a daily basis.

As a result, the Russians are stuck Syria, bound to fight on until they are overstretched militarily or until the bulk of domestic problems in Russia forces them out. Russia’s cash resources are dwindling, but it keeps squandering them on overseas military ventures.

In 1987, the USSR seemed invincible, but in a few years on, the Soviet army would have to leave Afghanistan, Syria, Angola, Cuba and the GDR in a hurry. Thus, the proverbial sitting by the river might not take that long to see the body of our enemy float by.

This publication was prepared by Anton Pavlushko specially for InformNapalm. Translated by Oleksandr Ivanov, edited by Artem Velichko
(Creative Commons — Attribution 4.0 International — CC BY 4.0)
Repost and share with friends.
For notifications about InformNapalm investigations follow us on Facebook and Twitter.