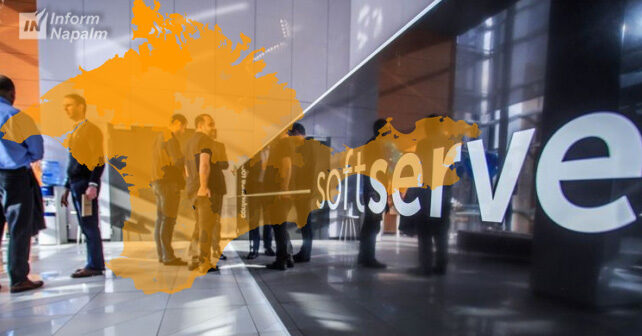 In September 2020, SoftServe experienced a major data breach that compromised personal information of their customers and employees. In this OSINT investigation, InformNapalm volunteer intelligence community will cast some light on the murky side of the company’s activities that has been hushed up by its public representatives for the past six years. We will touch upon the company’s activities in the occupied Crimea, business in the Russian Federation, and cooperation with government authorities of the aggressor country.

SoftServe was founded in 1993 by Taras Kytsmey and Yaroslav Lyubinets, two post-graduate students of Lviv Polytechnic. The company focuses on outsourcing software development for clients around the world. After seventeen years of operation, the company has significantly increased its employee base—there are more than 7000 people registered in Ukrainian offices only. Among SoftServe’s clients, there are Microsoft, Google, Cisco, Dell, and many other globally renowned corporations. SoftServe founders Kytsmey and Lyubinets are placed 41st ($188 million) and 51st ($153 million) in the latest TOP 100 richest Ukrainians ranking.

In addition to this, 54-year-old Taras Kytsmey heads the IT Ukraine Association. He features in videos about the quarantine, helps raise money for the Holodomor Museum, and is generally quite active in the media. But for almost seven years of the war, he has kept a conspicuous silence about the war in the Donbas, the ATO, the annexation of Crimea. Apparently, this is due to a conflict of interest, as his company continues to work with Russia.

In April 2014, SoftServe announced that they were closing their office in Sevastopol. At that time, it employed 150 people. The office on the peninsula was headed by Igor Tsimbal. According to him, in 2013, being a part of SoftServe, the division earned about $5.5 million from exporting software services.

Since he did not want to lose such profits, Tsimbal (probably together with Kytsmey) decided to continue software development in Crimea under the Alvion Europe brand registered in the Russian Federation on May 14, 2014 (OGRN 1149204001968). It is interesting that Tsimbal had registered a company with the same name in 2002 in Ukraine. In 2007, it was reorganized into Alvion Ukraine LLC that soon became part of SoftServe. After the Ukrainian outsourcer “left” Crimea, Alvion again reorganized into an independent company, which, in fact, became the legal successor of SoftServe in Crimea.

At the same time, Tsimbal remains the head of two more companies in Ukraine: Alvis Realty Europe and Black Sea Holding. The founder of both companies is Vilnis Ezerins, a 60-year-old US citizen. In the case of Alvis Realty Europe, he manages the company together with Tsimbal. The same person sits on the SoftServe board of directors. 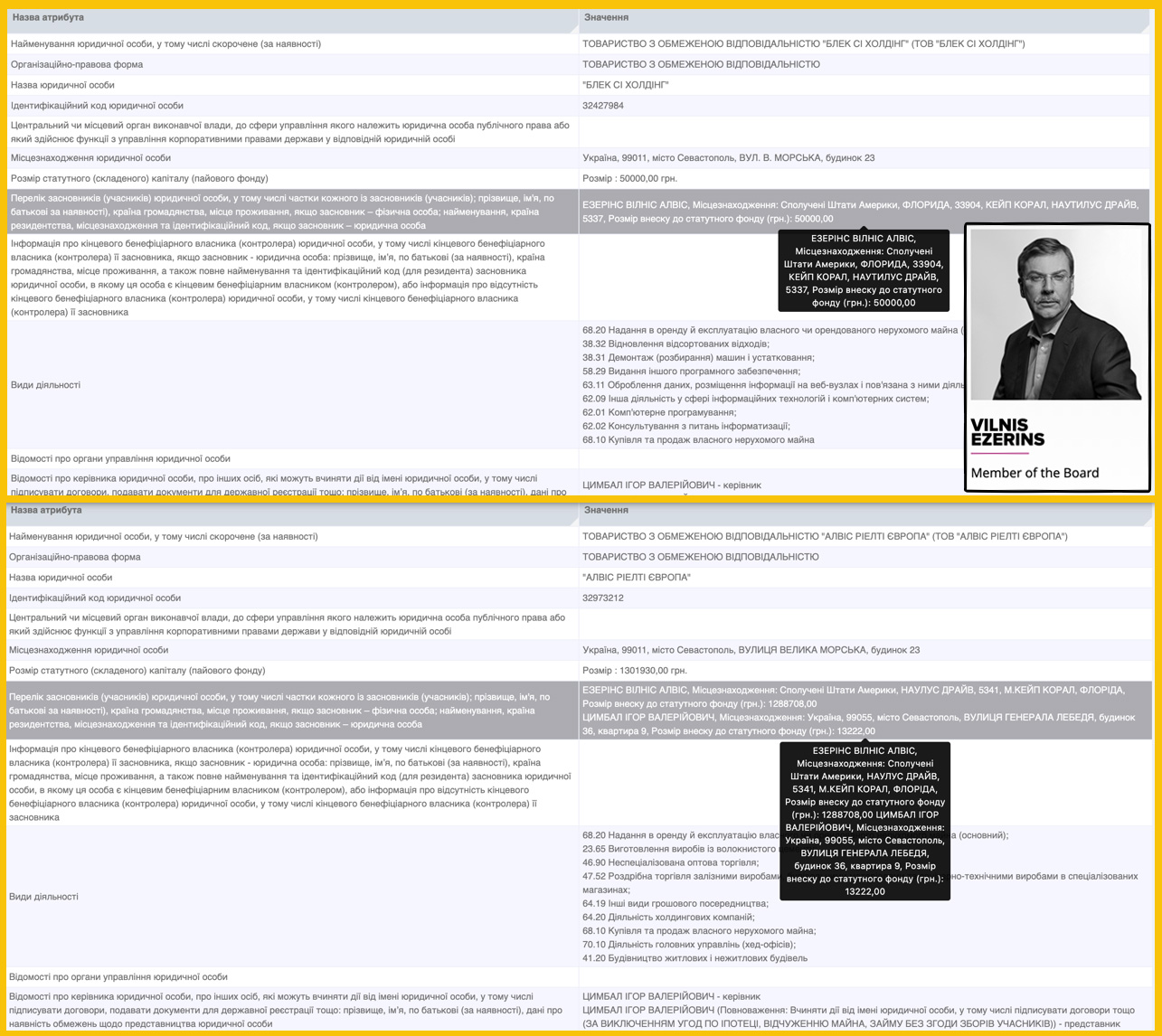 And this is not the only thing that connects Softserve, Ezerins, and Tsimbal. There is also a company with the name Alvis Realty Europe that is registered in the Russian Federation. At its foundation, Tsimbal contributed 1% of its authorized capital. Another 99% was contributed by one Gennady Menshchikov. It is known that this man is 81 years old and, back in 2002 he asked Vladimir Putin for the Russian citizenship. Alvis Realty Europe is the owner of Dialog shopping center in Sevastopol. It was the place where in 2017 the Tsimbal’s IT company Alvion Europe rented an office. SoftServe had rented office space there as well. 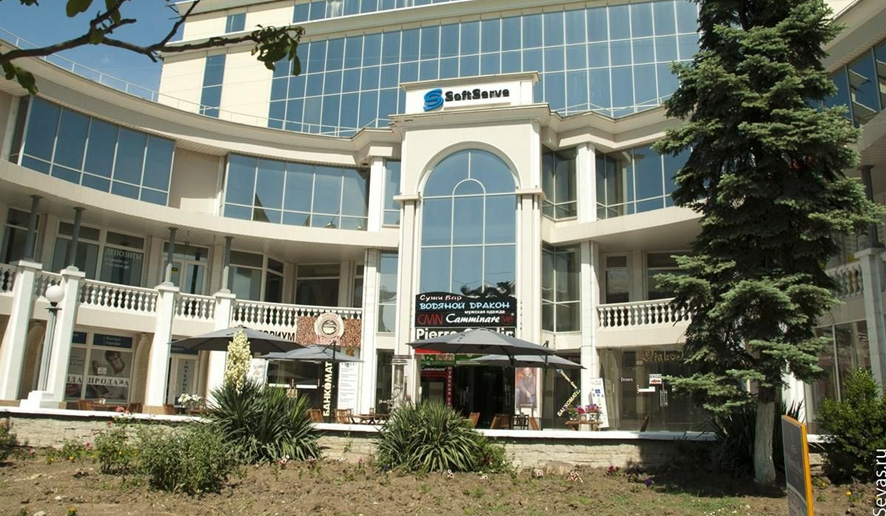 The most important fact here is that all these companies are connected. And not only via Tsimbal. Valeriya Ezerins, the wife of SoftServe board member Vilnis Ezerins, is Gennady Menshchikov’s daughter. And such intricacies in the statutory documents of different companies and the fact that they have clones in the Russian Federation can indicate only one thing—neither Vilnis Ezerins, nor SoftServe has severed ties with Crimea. Apparently, they did everything instead to not be de jure associated with the peninsula.

And this is logical since the IT company under Tsimbal’s leadership develops software for the Russian occupation administration in Crimea, builds an IT cluster in Crimea, and in 2017, Tsimbal was even called an IT advisor to the self-proclaimed head of Sevastopol Alexei Chaly. For all these “merits” back in 2018, Tsimbal got into Myrotvorets Center database.

Activity in the Russian Federation

SoftServe is a large company with offices in a number of countries. The official website lists offices in Ukraine, the USA, Great Britain, Germany, Sweden, Singapore, Poland, and Bulgaria. But there is not a single mention of offices in the Russian Federation. And this is another fact that Kytsmey and other members of the board deliberately try not to talk about in public.

In fact, in Russia, there is a subsidiary of the company SoftServe LLC that is successfully operating up till today. According to the register data, the company is headquartered in Moscow. The director is Vladimir Nistratov, there are 12 employees. The company’s founder is SoftServe LLC, registered in Pustomyty, Lviv region. 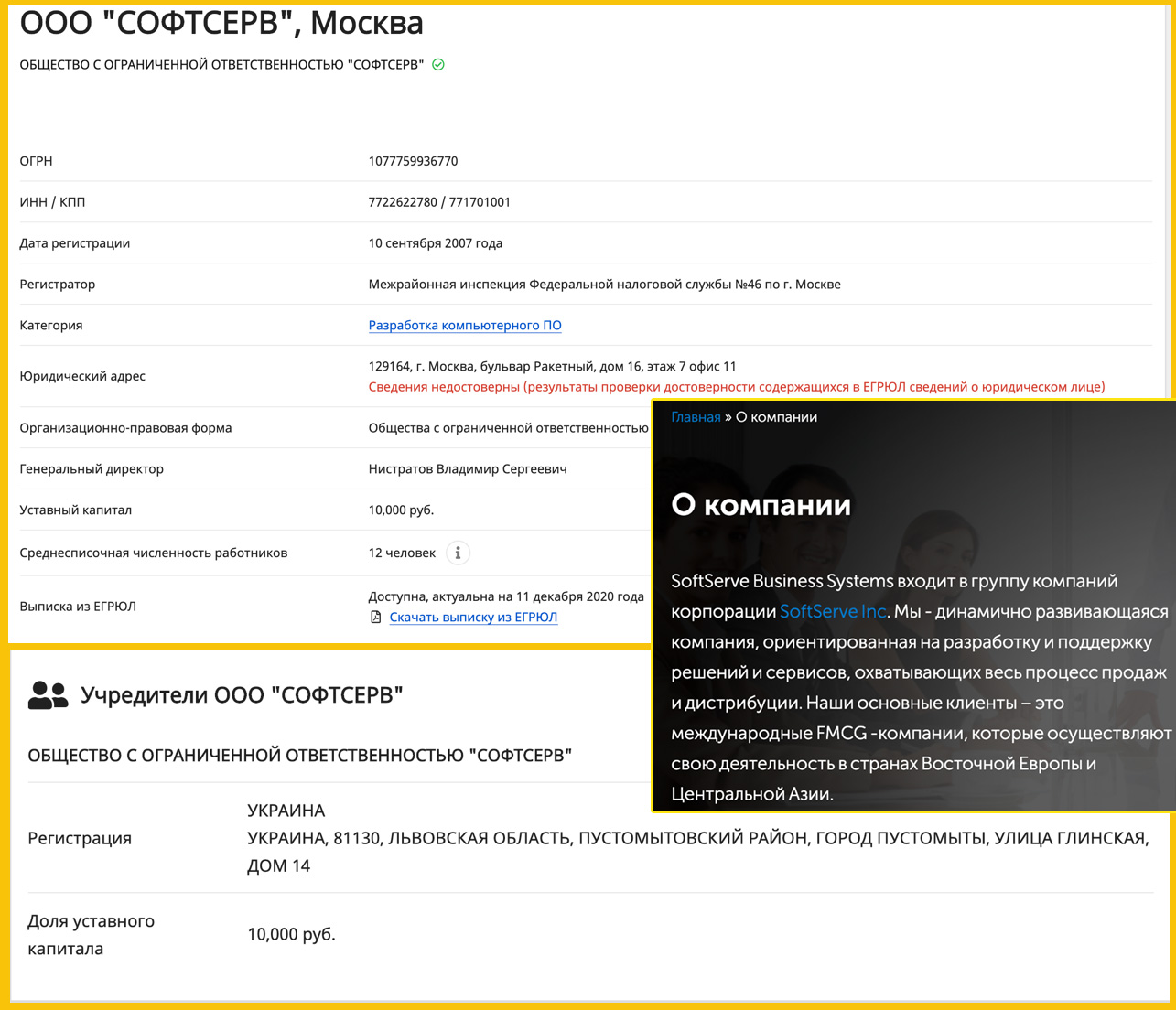 Even on the official website of the Russian SoftServe, they do not hide the information about their connection with the Ukrainian parent company.

And in the Contacts section, there are phone numbers in Ukraine and representative offices in Moscow, St. Petersburg, Novosibirsk, Yekaterinburg, and Samara.

In the Russian capital, SoftServe rents the 7th floor of the Alekseevskaya Tower business center on Raketny Boulevard, 16. IT specialists moved in there six years ago. “We are pleased to make a significant announcement“, they wrote in the news section of their website about the change of location of the Moscow office on May 5, 2014 (archive).

It is noteworthy that on this very day Ukraine closed the checkpoints in Crimea, and there was the first serious battle near Sloviansk in the Donbas—that was when the pro-Russian militants led by Igor Girkin first attacked a column of the Ukrainian military.

The company regularly pays taxes from this revenue to Russia. In 2019 alone, SoftServe replenished the Kremlin treasury by 3.5 million rubles. And that’s just income taxes. VAT amounted to another 7.5 million rubles. It is possible the money was later used to finance terrorists in the Donbas.

A subsidiary of Ukrainian SoftServe does not shy away from working with Russian government authorities. According to the extract of the Unified State Register of Legal Entities, the company has become a service provider for the “Main Scientific Innovation Center of the Federal Tax Service of the Russian Federation.” The deal was worth 585,000 rubles. It is clear that the cooperation with the state authorities in the Russian Federation is hardly possible without a clearance from the FSB.

We should like to pay special attention to the attitude of the company’s employees to the law of Ukraine and border crossing rules. We found some evidence of company representatives visiting Crimea bypassing Ukraine. For example, in June 2019, the regional manager of SoftServe, 37-years-old Ivan Belyaev from Yekaterinburg went by car to Crimea. On the way, his family spent the night in Anapa. The employee wrote about this on his Instagram page. But you can only get to the peninsula from Anapa through the Kerch Strait, and that is a violation of the state border crossing rules liable to a ban of entry into Ukraine. However, not for everyone—a month after this trip, Ivan Belyaev visited the company’s office in Lviv for the Hawaiian-style staff party. 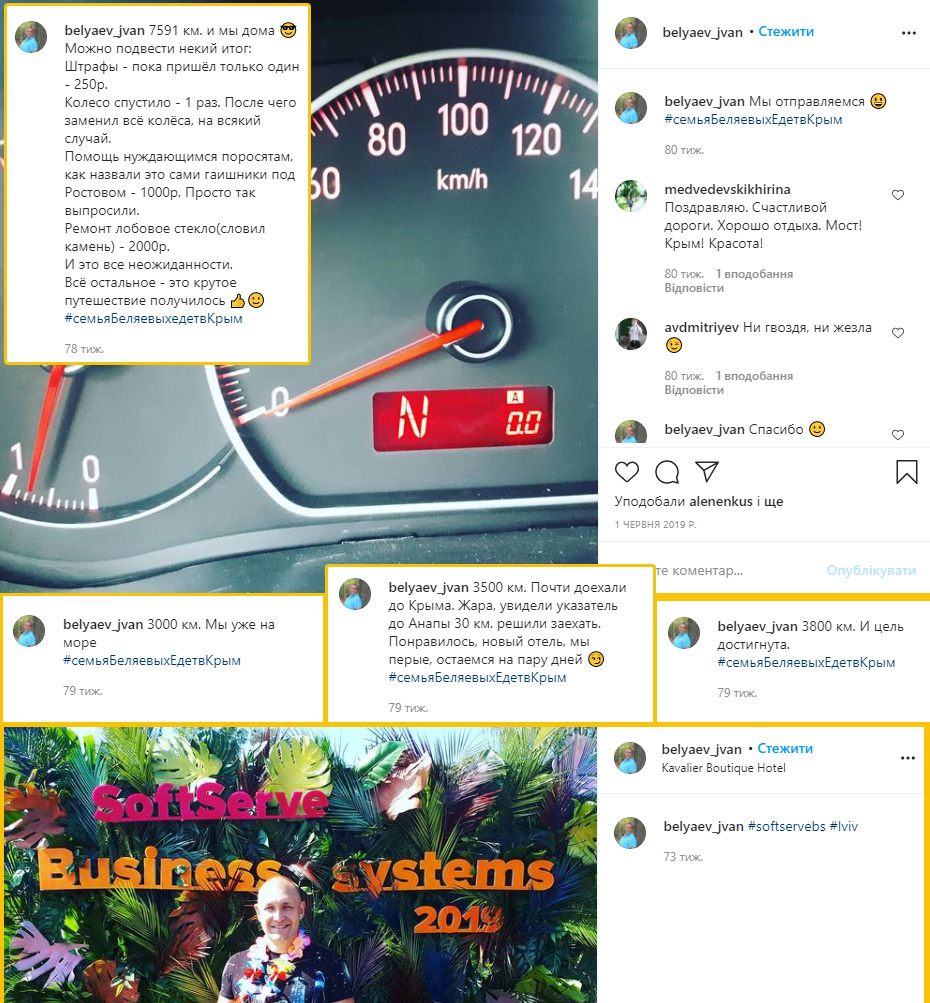 Thus SoftServe, one of the largest IT developing companies in Ukraine continues to do business in Russia and the occupied Ukrainian Crimea through deliberate schemes. It takes orders from state authorities of the Russian Federation. It pays considerable taxes to the Russian Federation. At the same time, its employees brazenly violate Ukrainian border crossing procedures with the occupied Crimea, and for some reason this does not lead to any sanctions or entry bans to Ukraine. After illegally traveling to Crimea through the Kerch Bridge built by Russia in violation of the international law, company’s employees immediately attend the “Hawaiian party” in Lviv. Perhaps this publication will help the company management to reconsider their attitude to the realities of the long-term Russian occupation of Crimea and the Russian aggression against Ukraine in the Donbas. Russia’s aggression against Ukraine continues, the civilized world consistently imposes economic sanctions on the Russian Federation and deems doing business in the occupied Crimea inadmissible, whereas a large Ukrainian IT company based in Lviv and operating in the EU and the United States sets up schemes to circumnavigate sanctions and continue to do business with the occupier.