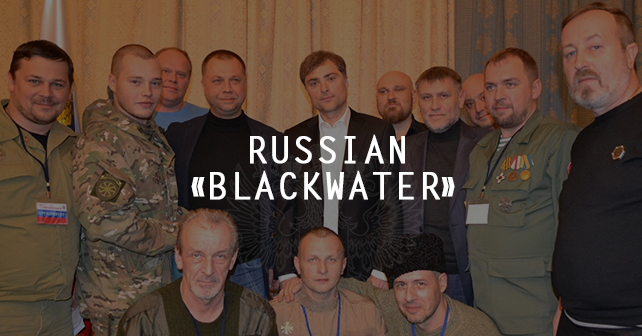 Following the news on the assumed closing of the Novorossiya project by the Russian puppeteers in May 2015, a press conference was held in Moscow on August 27, 2015, dedicated to creating the so-called “Union of Donbas Volunteers” Interregional Voluntary Organization (UDV). The Union was headed by the former DPR Prime Minister Aleksandr Boroday. In October, the first congress of the new organization was held, with its main official goals stated as uniting, employing and helping the “volunteers” who fought in the Donbas.

UDV management and membership never concealed the fact that their employer (or, rather, slaveowner) is Russian presidential aide Vladislav Surkov, known as one of the Kremlin’s shadow operators. In this investigation, in which we use the archives of the correspondence of the UDV deputy head A. Pinchuk, we will try to understand why Surkov began to form and finance the UDV.

After the failure of the Novorossiya project and the recall of the Russian spin doctors and burned military experts from the East of Ukraine, the rather broad powers of Surkov (who still was at that time the main curator of the Ukrainian issue) were significantly limited by the top Russian leadership. Only the issues directly related to politics in the occupied territories of the Donbas were left within Surkov’s purview (meetings within the scope of the Minsk agreements, creating a favorable media image for the PDDLO “leadership,” elections in the Donbas, spinning movements in the style of “Donetsk and Luhansk Republics”, etc.). All other fields of work were divided between the Russian special services (FSB and GRU), as well as the relevant Russian ministries (Ministry of Economic Development, etc.).

All further attempts by Surkov to influence the Donbas issues beyond his purview were curtailed by his competitors. First deputy director of the Russian Federal Security Service (FSB) Vladimir Grigoryevich Kulishov succeeded the most. There are reasons to believe that after the assumed closure of the Novorossiya project, he has been managing all appointments in the occupied territories and controlling everything that “crosses the ribbon” to get there, and does not like anyone grazing in his garden.

Such state of affairs was very insulting to the Kremlin’s gray cardinal and, as an experienced opportunist, he created a puppet jingoistic organization that is on trend in Russia, expecting this tool to help him renew and consolidate in the near future his influence not only in the Donbas, but also in other regions and areas related to the sphere of the national security of the Russian Federation.

Surkov’s personal interest in the UDV’s activities is also confirmed by the fact that this organization is financed by his business partner Sergei Aleksandrovich Astanin (General Director of the Foundation for Support and Development of Education and Culture of the Nations of the World). 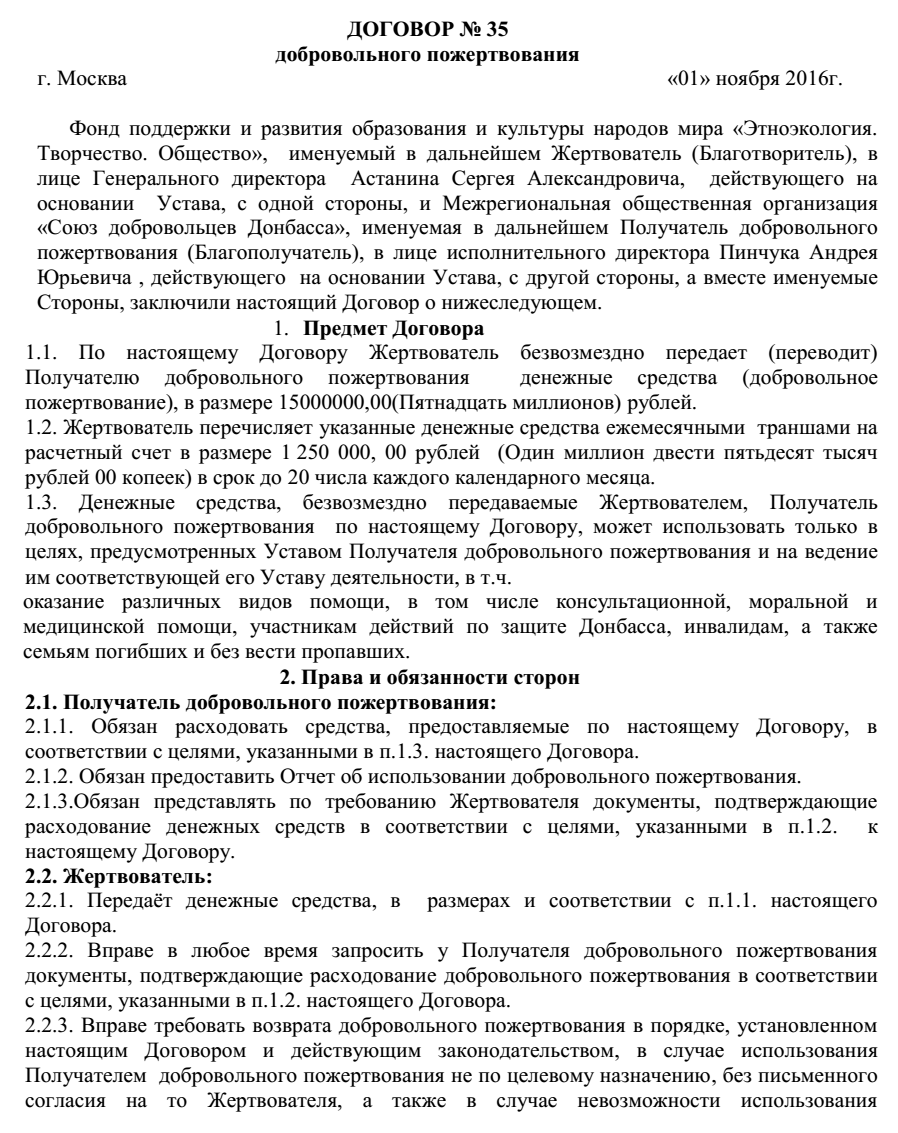 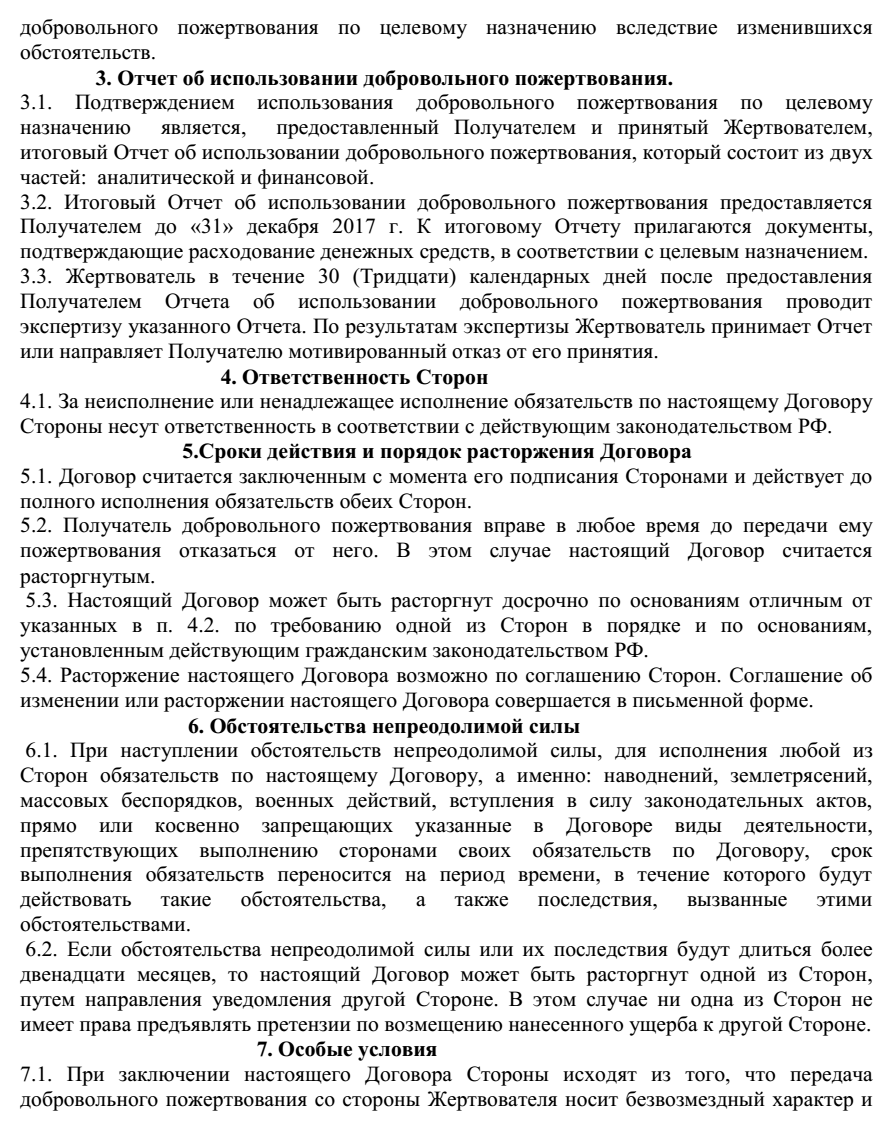 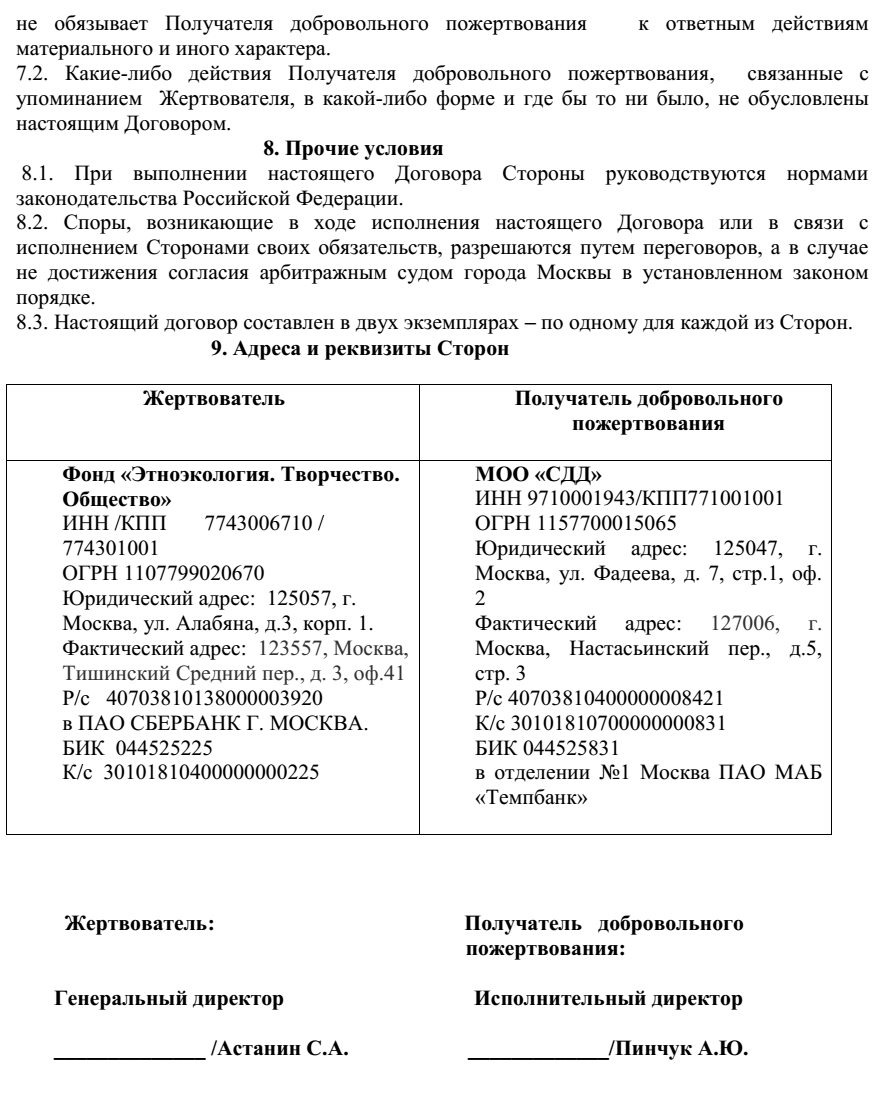 First, we will analyze the main outcomes of the UDV’s activities. This will help us establish the true goals that Surkov pursued when creating the organization. As of early 2017, Surkov has managed, through Boroday:

UDV includes the so-called Commanders Council, charged with monitoring the situation in Donbas and reacting to its changes. Some of the commanders, such as the UDV special authorized representative Oleg Anatolyevich Mamiyev (commander of “Pyatnashka” brigade), are still in command in the DPR. 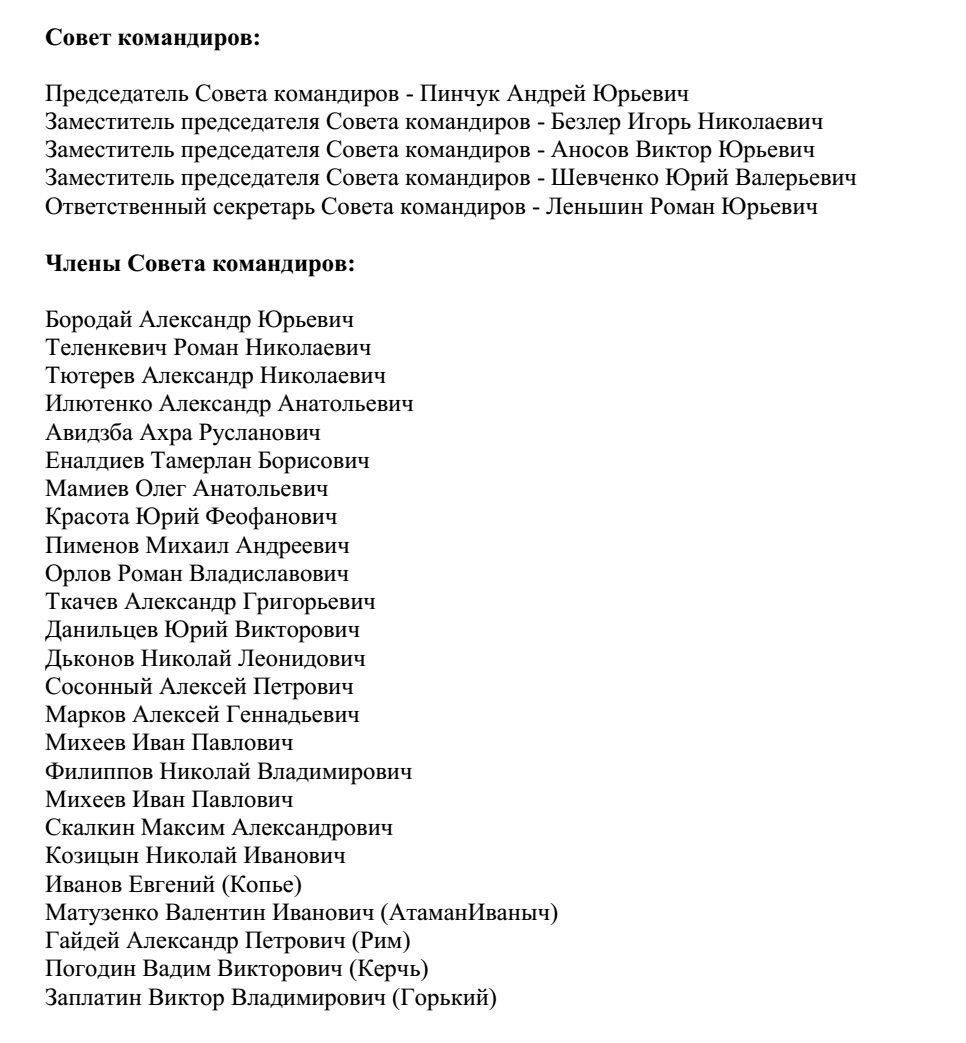 UDV management also has very warm working relationship with a certain “Comrade Alex,” representative of the so-called Union of Russian Troopers and, in actual fact, a high-ranking member of the Main Intelligence Directorate (GRU) of the Russian Ministry of Defense who oversees this organization (this character and his role in the Russian annexation of Crimea deserve a separate journalistic investigation).

Media repeatedly wrote about the possible involvement of the UDV members in the coup attempt in Montenegro.

We can only add that on September 30, 2016, on the instructions of A. Pinchuk (Surkov could not have been unaware of this), a seasoned terrorist and a Russian citizen Stanislav Aleksandrovich Orlov arrived in Montenegro (call sign “Hispanic”, former commander of a reconnaissance unit in Horlivka). A video of him, filmed with the assistance of UDV, can be found here: https://www.youtube.com/watch?v=3abIsGWd1nc. We remind that according to the Prosecutor’s Office of Montenegro, the liquidation of the country’s Prime Minister was scheduled by terrorists for October 16, 2016. 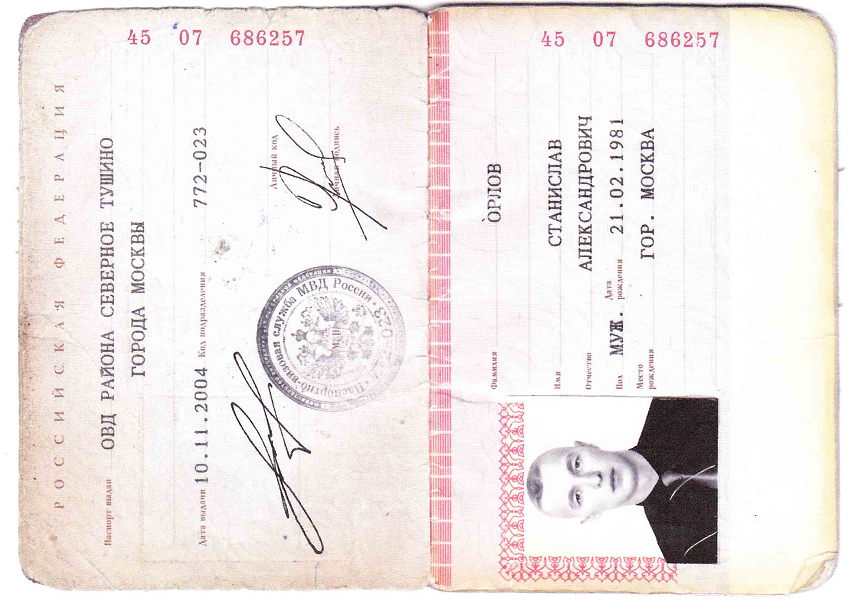 All this confirms that UDV members took part in preparing a coup d’etat in Montenegro. Surkov, probably, very much wanted to share the victory lap in case this special operation succeeded.

To begin with, the UDV leadership instructed its territorial subdivisions to set up a network of private security firms in Russia, as well as in the occupied Crimea, which whould resolve the issue of employing former militants and, more importantly, providing them with access to legal weapons. It should be noted that this process provoked quite a strong opposition from the local FSB units, since security companies are traditionally the home territory of the retired security officials, that is, the niche has long been occupied.

In parallel, Boroday and Co. are considering the question of forming, from among the UDV members, the so-called Reserve Volunteer Corps of the Russian Guard. The main task of the National Guard of Russia is to protect the Russian leadership in the event of an outbreak of revolutionary sentiments. In fact, such a corps, if necessary, could become a non-government force that could disperse anti-Putin rallies and protests in the field. Perhaps, Surkov is trying to demonstrate his loyalty and readiness to protect Putin from Russians, or maybe, on the contrary, he is preparing his own PMC in his own interests.

Surkov discussed all these and other issues with UDV members on November 4, 2016 in the President Hotel during the meeting of the so-called UDV Commanders Council. 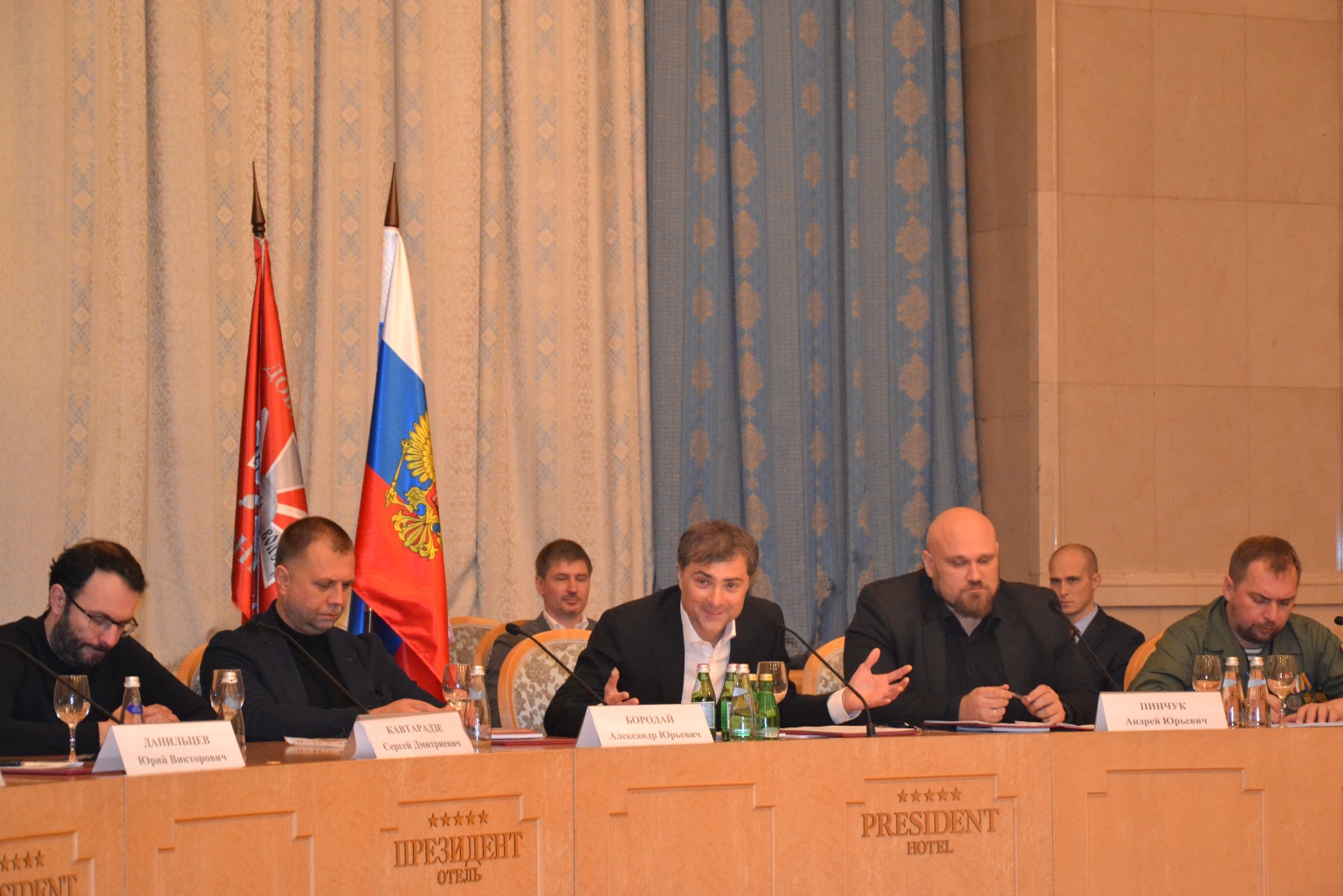 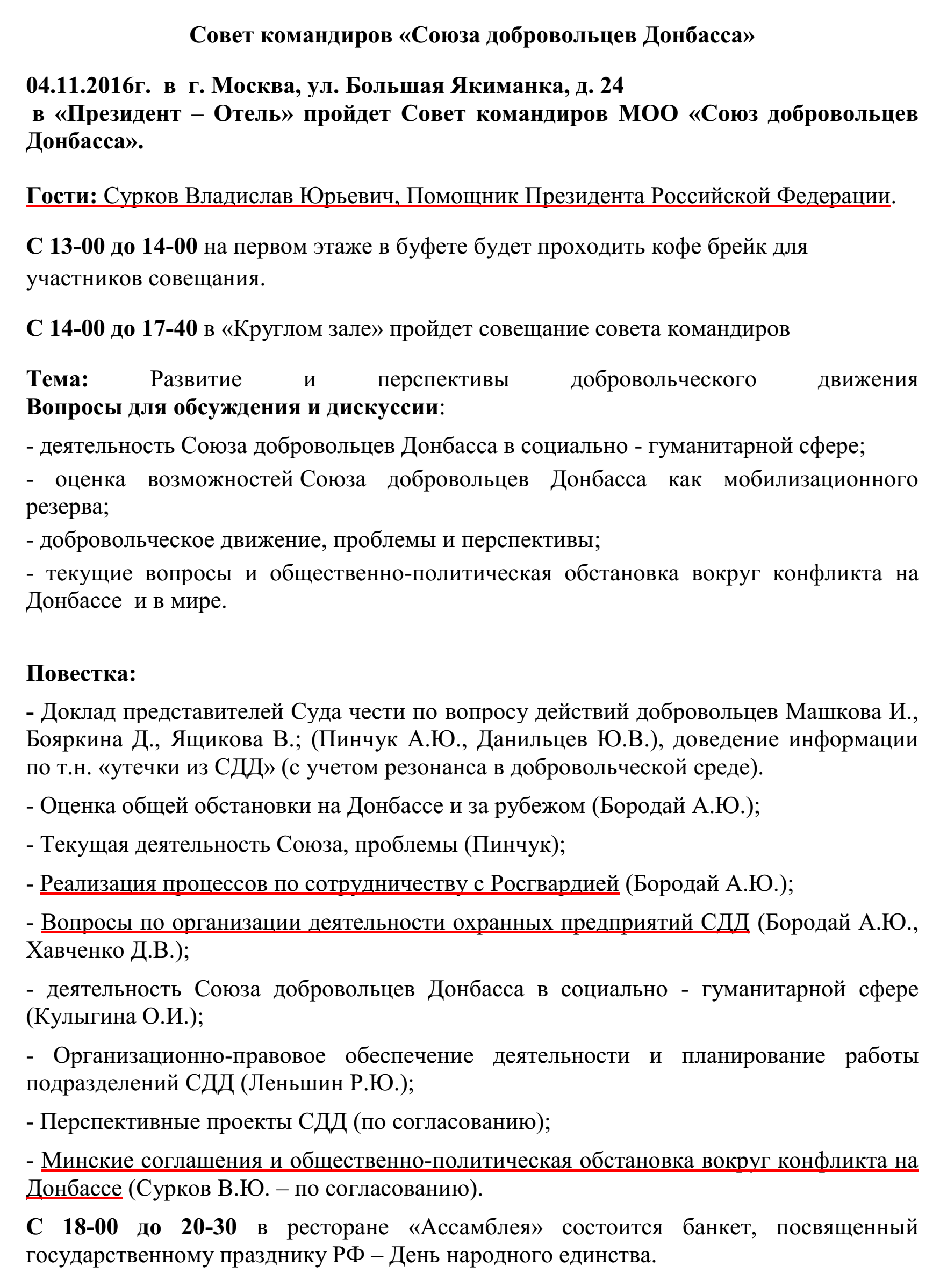 Also, the concept of UDV activities includes assisting the Russian Guard in terms of collecting and processing information, both from open sources and by covert operations. Besides, the possibility of creating training camps (conspired for training centers to train guards) for UDV members throughout Russia is under consideration. Already today, we can talk about the work of two such camps: in the Moscow region (Preobrazhensky defense and sports complex) and in the occupied Crimea (Eski-Kermen in Bakhchsarai district). There, militants, in the format of military and sports assembly (with the duration of 24 days) undergo physical, tactical, fire, medical, and engineering training.

Surkov has created a mobilization reserve of militants that can be used not only in Donbas, Montenegro and other countries, but also to achieve home policy goals in Russia. He actively lobbies the activities of this organization. He does this because, on the background of international sanctions, the domestic political situation and the alignment of forces in Russia are changing; besides, Russia is changing its tactics in Donbas: it tries to discredit the embarrassing Minsk agreements, recognizes L/DPR passports, “nationalizes” the industry of the occupied Donbas, and prepares for another escalation of the conflict. Raising the stakes is necessary for Kremlin to negotiate on more favorable terms.

In the foreseeable future, to destabilize the situation in Donbas, Putin will again need the Russian marginal “volunteers,” since the more active use of the regular army significantly increases the risks of new sanctions and other measures that are taking more and more distinct shape in the context of lawsuits in The Hague. As you already guessed, Vladislav Surkov can provide Putin with this army of “volunteers.” In this way, the Kremlin’s gray cardinal could arrange for his comeback and wipe the eyes of his opponents. This is his subterfuge.

However, the FSB, in turn, is awake and very worried about its “own garden.”

In 2016, the internal conflict between the FSB and Russian Presidential Administration led to the FSB’s Information Security Center (which, among others things, is connected to Malofeyev through the “League for Secure Internet”) grabbed hold of the dump tank, working under the “Humpty Dumpty” sign, and then both were simply sacrificed, taking the occasion of the hack by the Ukrainian Cyber Alliance of Surkov’s reception and mailboxes, as well as of other events described in the article: Hacker behind the looking glass: the reasons behind the arrests in FSB and the hunt for Humpty Dumpty.

This example shows that Russian voluntary terrorists, who have joined the banners of Surkov, are risking to one day become a bargaining chip. Then, massive arrests will start in Russia, without waiting for The Hague Court decisions. In parallel, the next wave of cleanups of “gang commanders” will sweep through the occupied territories of Donbas, as we recently observed in the cases of Givi and Anashchenko. Time will tell, which of the Kremlin towers will win, and what will be the role of the “Russian riot” in the game. But it is obvious that, after the “Russian spring,” a “… winter” will inevitably follow for the Russians. You can choose the adjective you like.

We call on our readers to actively share our publications on social networks. Broad public awareness of these publications is a major factor in the information and actual warfare.

5 Responses to “Why Surkov Needs Private Army: Union of Donbas Volunteers (UDV) as Reserve of National Guard of Russia”