From the annexation of Crimea to the war in Donbas: the GRU curator of the DPR terrorists was identified 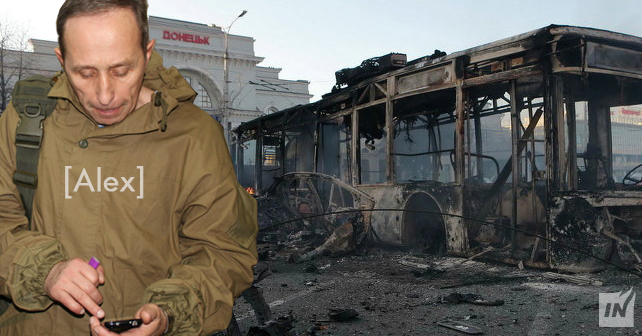 On the systemic long-term cooperation of the Russian Union of Donbas Volunteers (UDV) with the agent “Alex” – a high-ranking officer of the Russian GRU, we already told in the investigation of the “secret army” of presidential aide Vladislav Surkov. But who exactly hides behind this call sign, until recently, remained a mystery. This person could not be identified for a long time, and such a level of conspiracy indirectly indicated that we were dealing not with a simple mercenary, but with a really well-trained and protected officer of Russian special services. This assumption was confirmed thanks to the archives of Andrei Pinchuk, the executive director of the UDV.

The curator, hiding behind the pseudonym “Alex”, is an officer of the central apparatus of the Russian Main Intelligence Agency of the General Staff (GRU) Alexander Grigoryevich Tkachev. 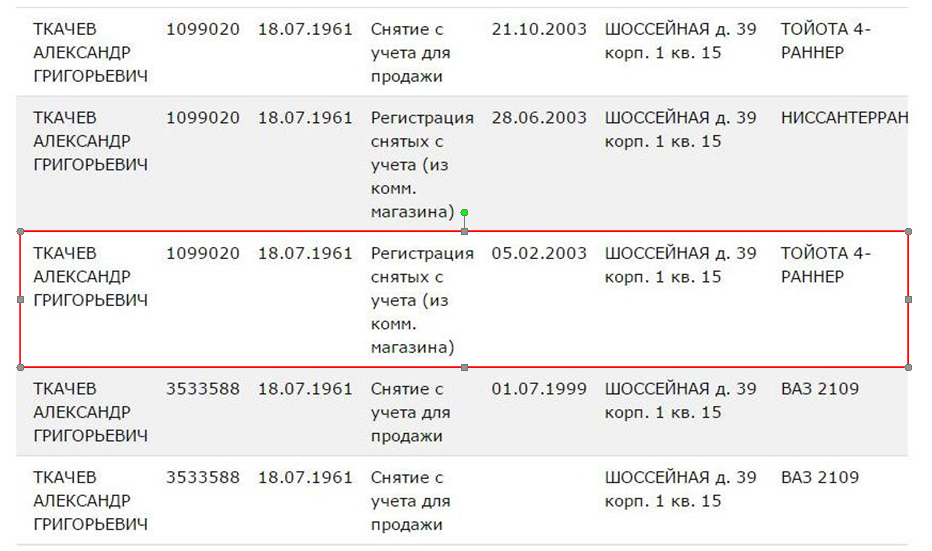 His career path is noteworthy: the “Agency” appointed Tkachev a representative of the department of relations with state and law enforcement agencies of the executive committee of the Union of Russian Paratroopers. The minutes of a meeting of the Board of the Union of Russian Paratroopers contained a list of the invited guests. Among them was Alexander Grigoryevich Tkachev (“Alex”). His name is underscored in red.

Copy of the minutes of the Union of Russian Paratroopers meeting 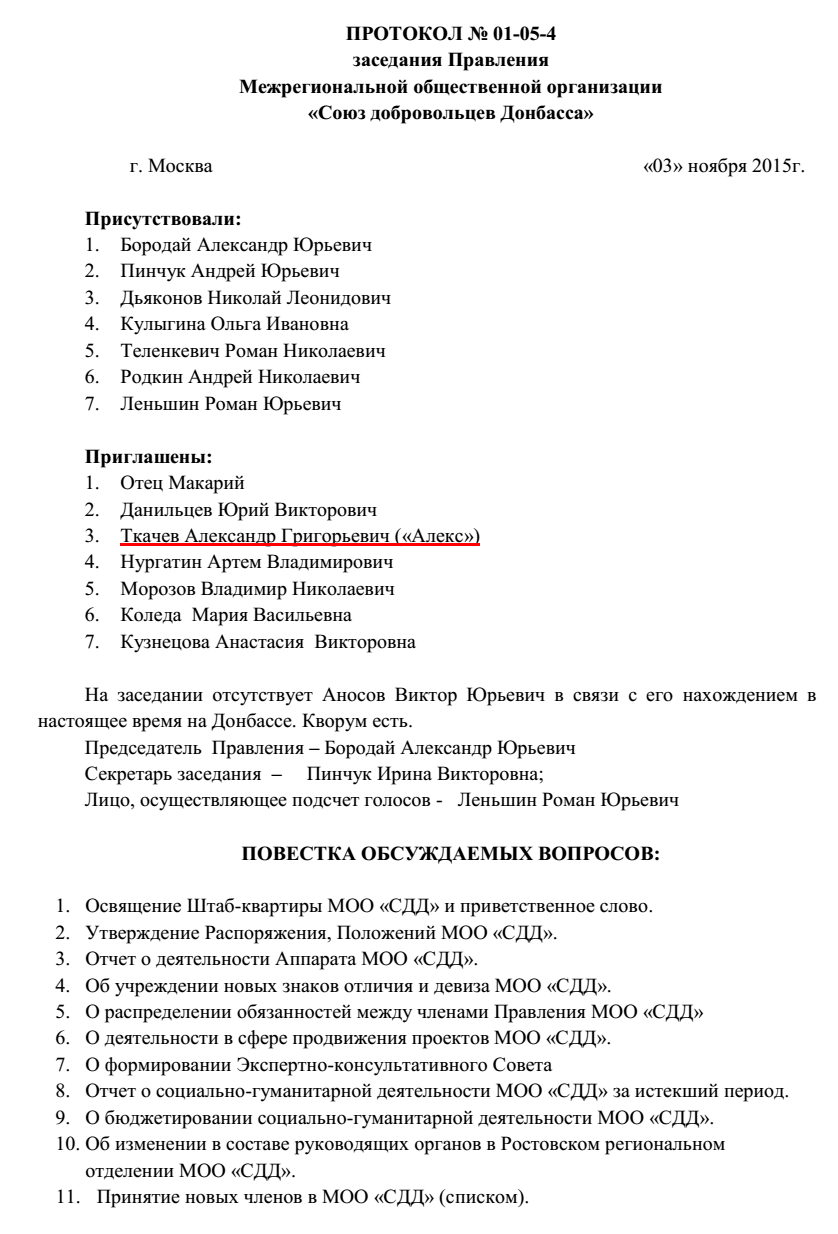 Thanks to the photo archive from the VDU congress, exclusively handed over to InformNapalm by hackivists of the Ukrainian Cyber Alliance, we were able to find a photo of “Alex”. 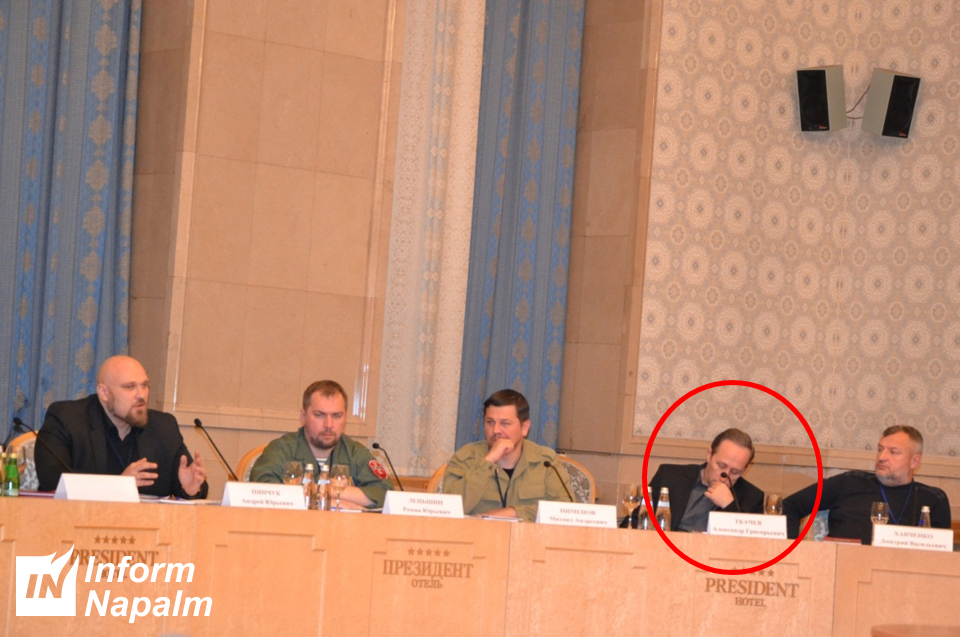 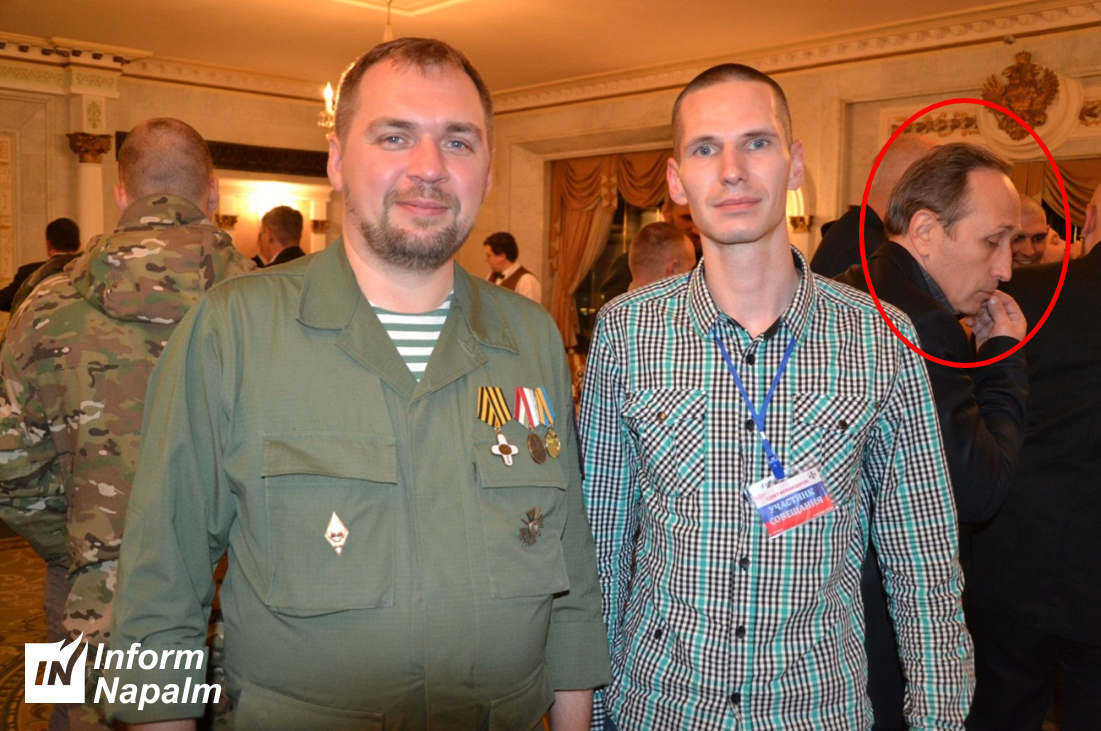 A few more of his pictures were found on the website of the Union of Russian Paratroopers. 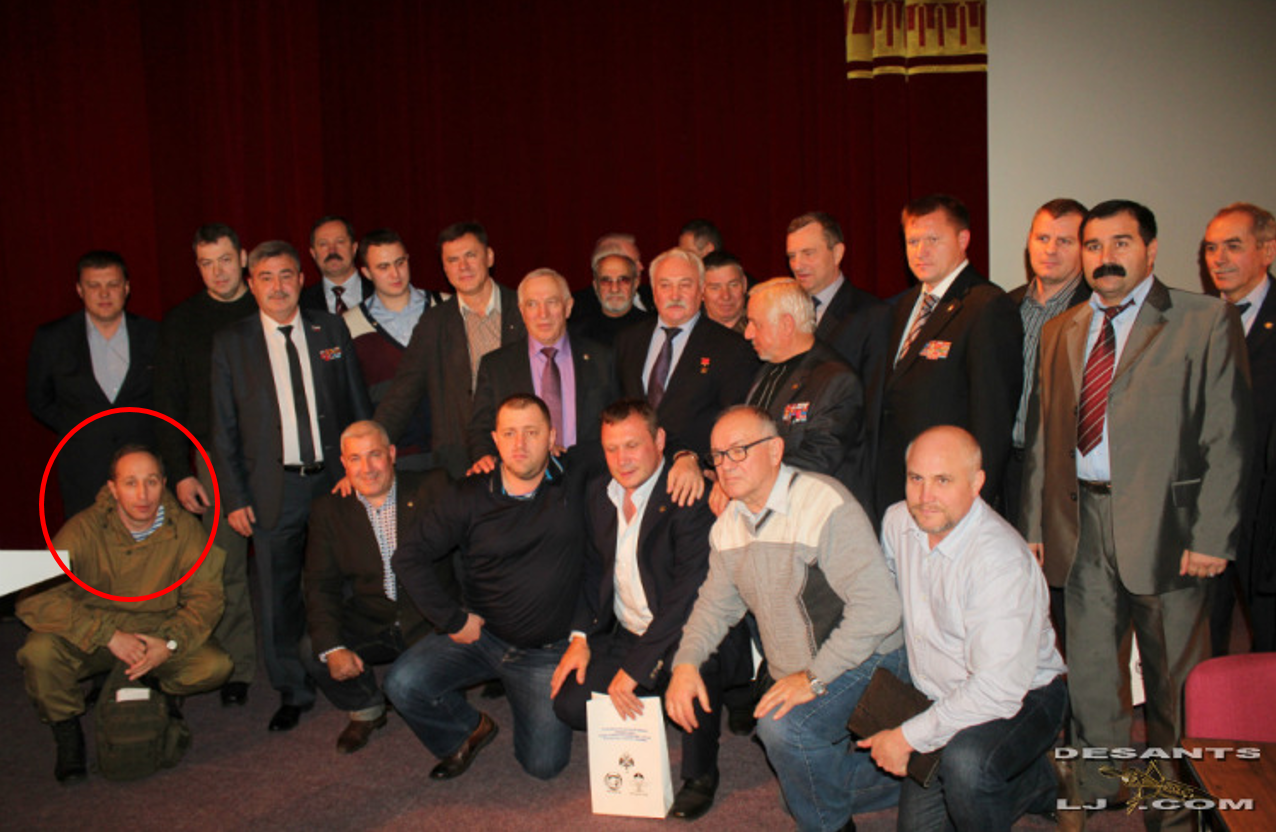 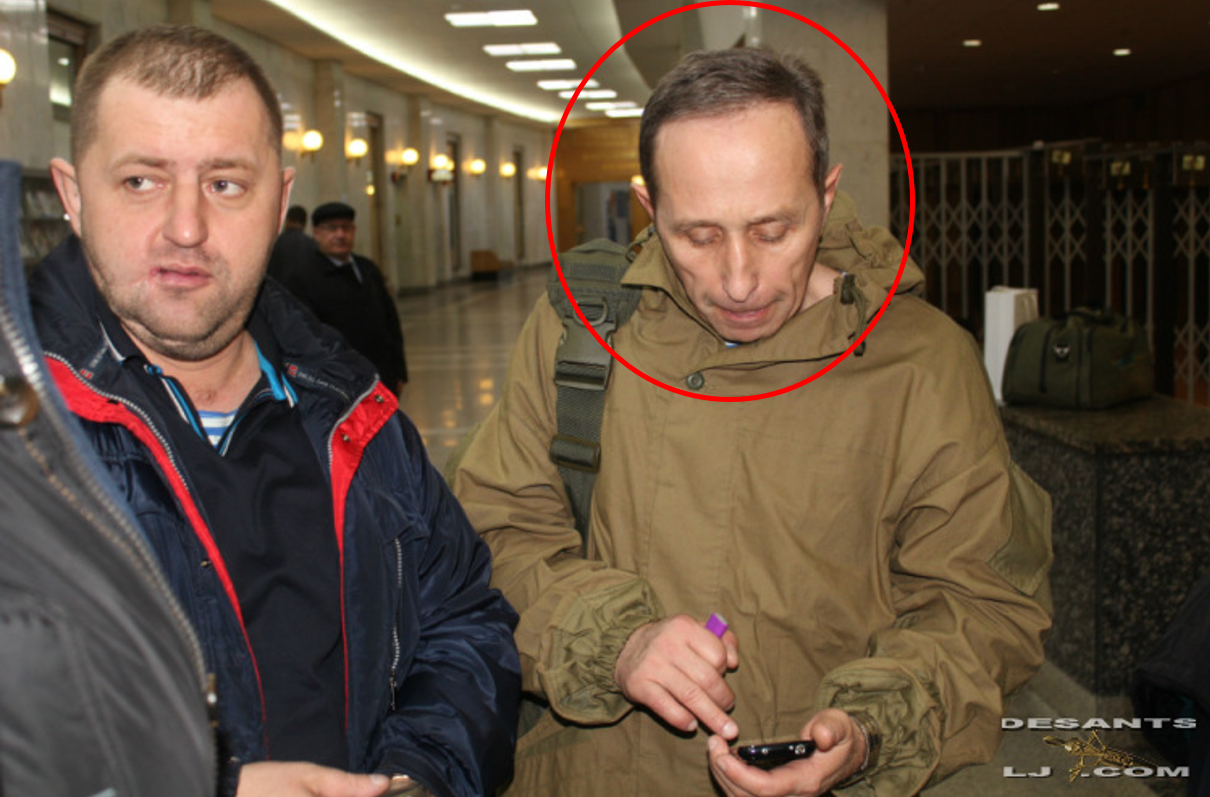 Earlier, when we analyzed the events of the “Crimean Spring” and the reasons for its emergence, from the direct participants of the occupation, namely the members of the “voluntary squads” of Crimean self-defense, we repeatedly heard of a certain “Alex”. He was called the “Moscow big wig from the GRU” and he allegedly was responsible for the overall coordination of actions. Later we learned that this was our “Alex”, in charge of the GRU’s forces and assets (special units formed from former servicemen of the Airborne Forces, Interior Ministry, including the Berkut, as well as collaborators from the Ukrainian Security Service), who were selected from among the notorious “Crimean Self Defense” and various social organizations of Crimea. A special role in recruiting and selecting these people belonged to the Union of the Crimean Afghan War Veterans, the Union of Paratroopers of Crimea, the Congress of Russian Communities of Crimea, the Civic Asset of Crimea, and all kinds of Cossack formations. All of them were created in 2010-2013 due to the policy of the then Ukrainian President Viktor Yanukovych, which was openly aimed at surrendering the national interests of Ukraine.

In addition to Crimea, such organizations were actively created and flourished in the south and east of Ukraine, and Russian special services had a direct relationship with them in the framework of the plan to unleash military aggression against Ukraine. During the well-known events in Crimea in the spring of 2014, the groups of trained militants, assembled in this way, took an active part in the seizure and blocking of almost all the objects on the peninsula, they also deployed roadblocks and carried out service on them. And most importantly, representatives of these forces were included in the operational center of Russia’s highest military and political leadership deployed in Crimea to lead the annexation process, led by State Duma deputy, chairman of the Russian Union of Afghan Veterans Franz Klintsevich.

“Alex” played one of the main roles in the said center during the annexation of Crimea. Among the rank-and-file members and management of the UDV, Alexander Tkachev was considered the real legend and called “Comrade Alex.” Alexander Borodai offered him to take one of the two posts of a specially authorized representative of the UDV (the second was Oleg Mamiev, commander of the “Pyatnashka” Brigade).

As far as we were able to establish, it was the leadership of the UDV who wanted to have “Alex” among its members. His authority was used to increase the importance of the UDV and demonstrated to militants that the union functioned in conjunction with the Russian GRU, which meant that “the rear is covered and all issues are resolved.” “Alex” himself used the post of a specially authorized representative of the UDV as another cover, because at present his professional activities are tightly connected with the occupied Donbas. Now he is engaged in the integration of Russian mercenaries into the 1st Army Corps of the DPR. In this, he is helped by the loyal terrorist Victor Yurievich Anosov (call sign “Nos”) who heads the Separate Commandant Regiment of the 1st Army Corps of the DPR. 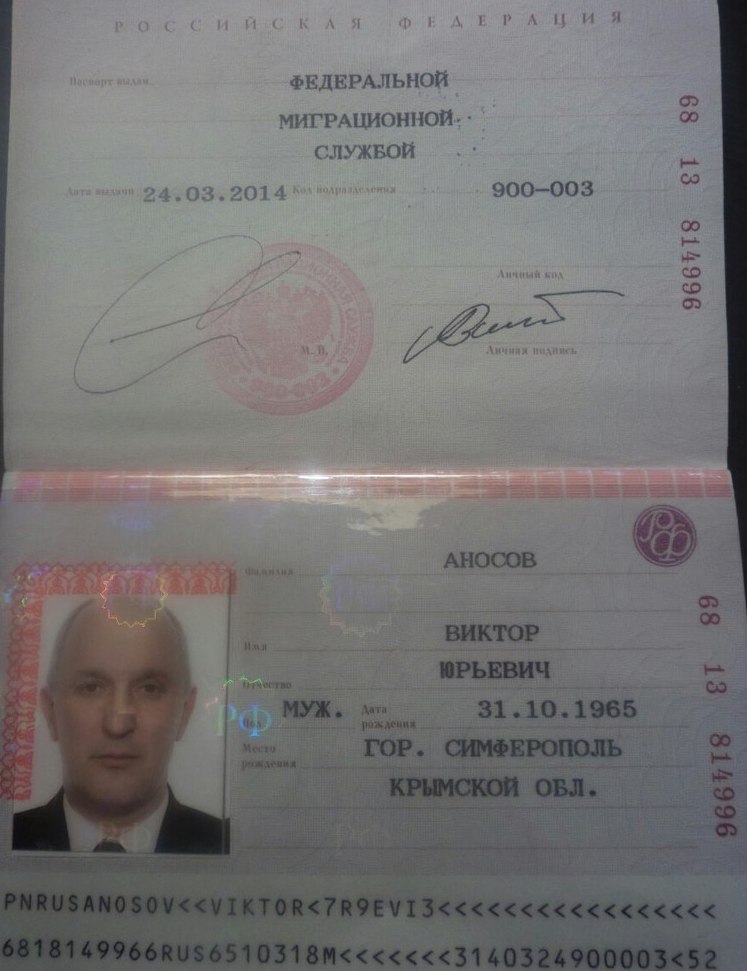 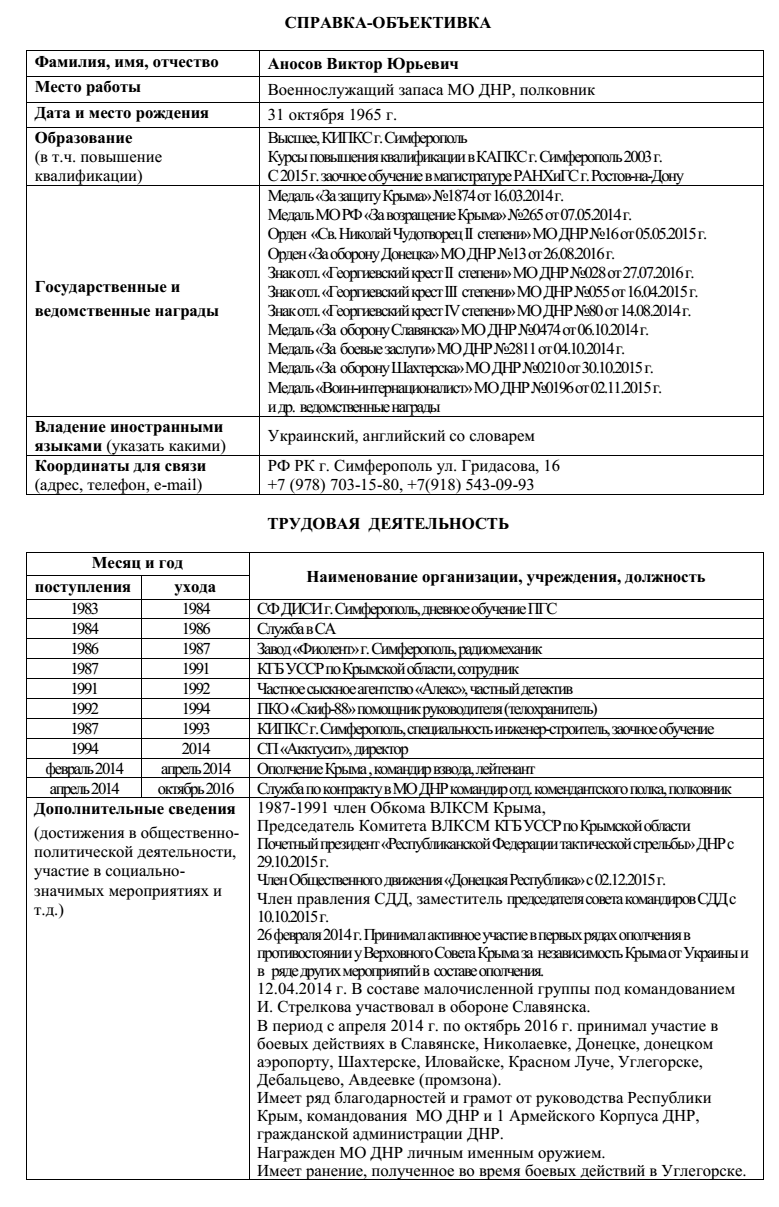 It is noteworthy that after the dismissal from the KGB in Crimean Oblast, in 1991-1992 Anosov worked in Crimea in a private detective agency called “Alex”. Tkachev had direct connection to his work. Also in the ranks of this detective agency, which was used by the special agencies, you can find another accomplice and loyal subject of “Alex” – Nikolai Vladimirovich Filippov, commander of the Internal Troops Battalion of the DPR (military unit 5001, based in Horlivka). This unit plays a role of a kind of protective detachment and is responsible for preventing protests of residents of occupied Horlivka and other Donbas towns. 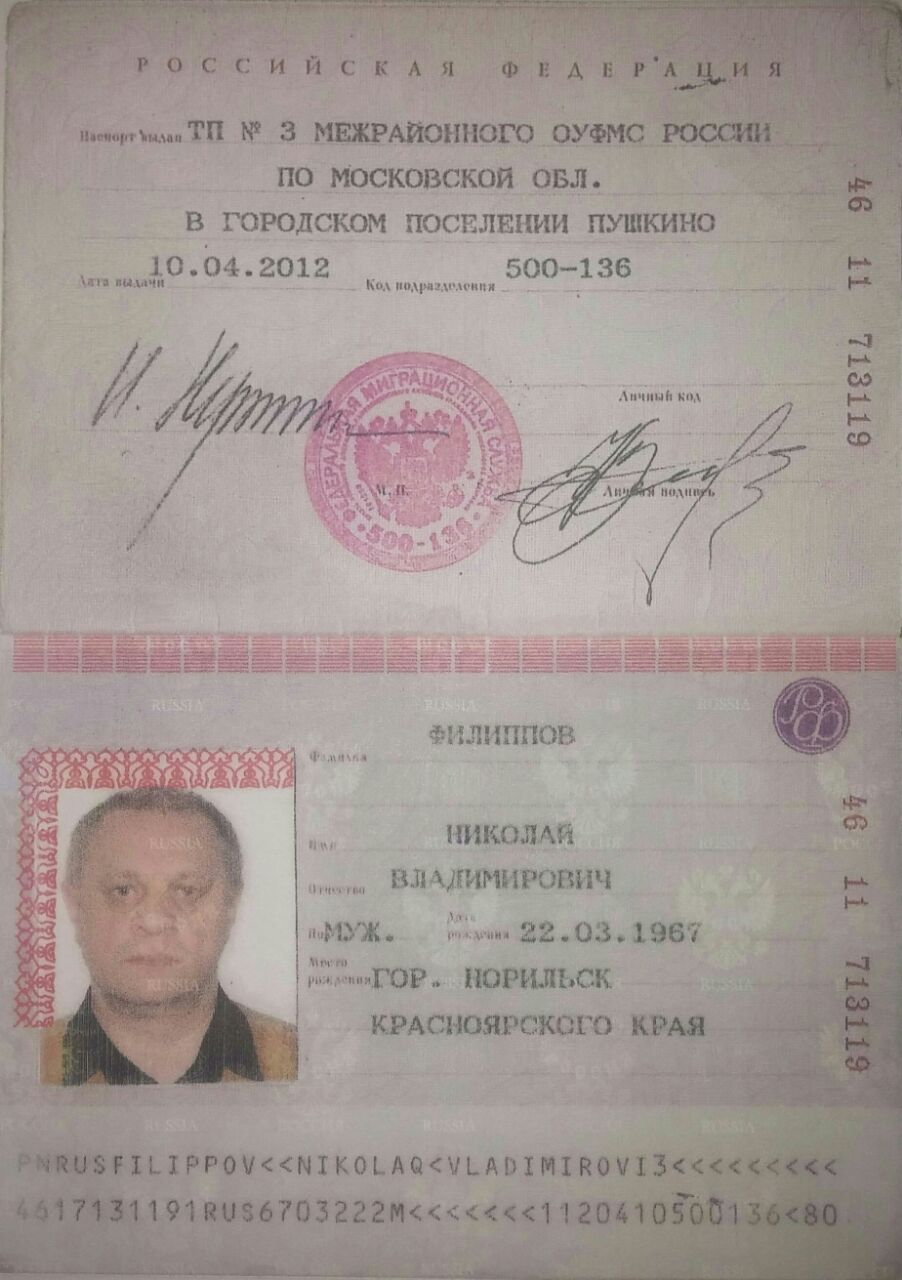 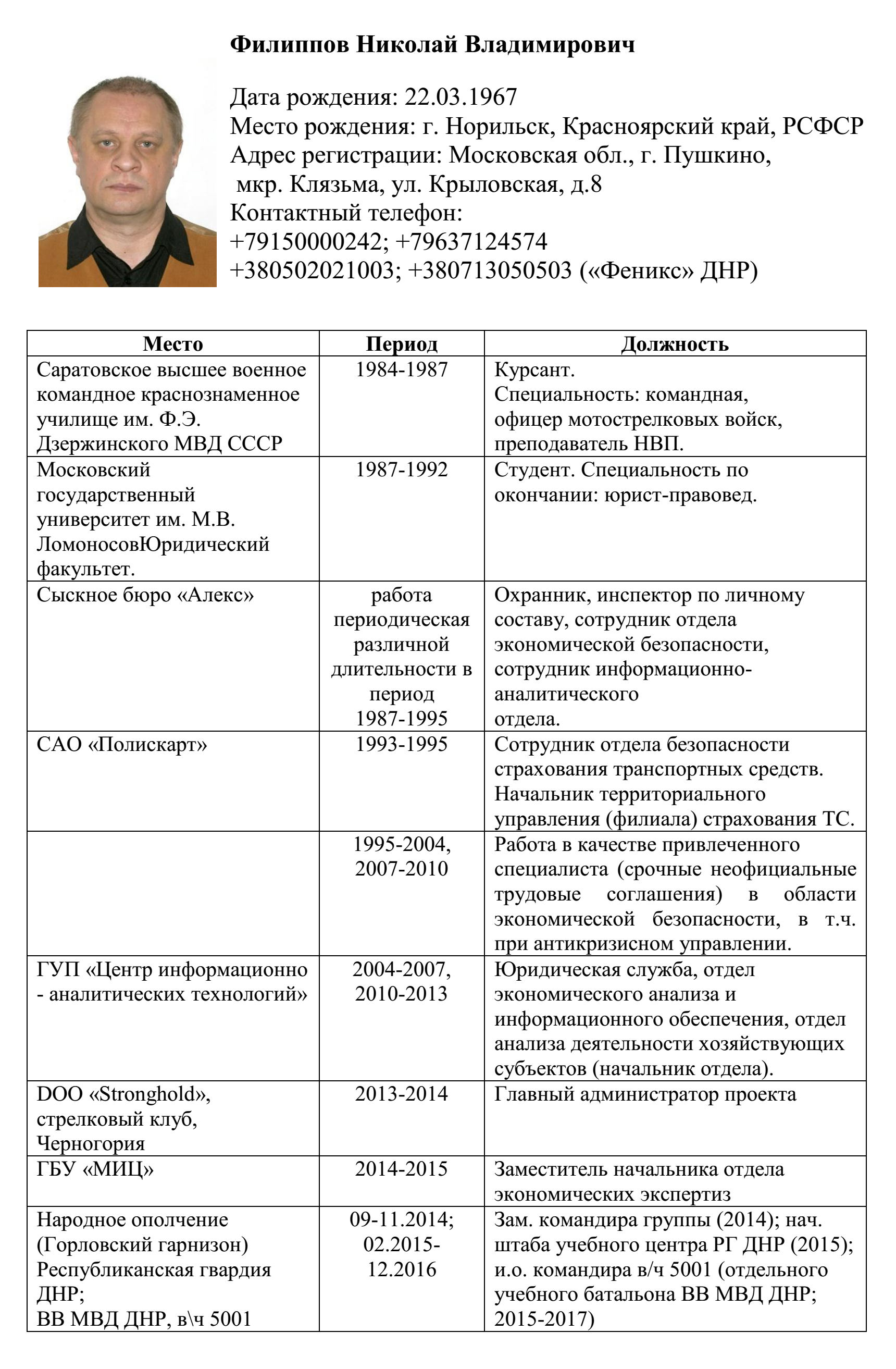 After the in-depth analysis of materials provided by hacktivists in previous InformNapalm publications, it was possible to identify high-ranking Russian terrorists who carried out the annexation of Crimea and direct Russian aggression in the Donbas. Pay attention reading the dumps of militants’ documents: they contain many answers to questions about the terrorist activities of Russia against Ukraine.

The publication has been prepared by Dmytro Lisunov and Oleh Baturin (Europrostir NGO) especially for the international intelligence community InformNapalm.

We call on our readers to actively share our publications in social networks. Broad public awareness of these publications is a major factor in the information and actual warfare.

2 Responses to “From the annexation of Crimea to the war in Donbas: the GRU curator of the DPR terrorists was identified”