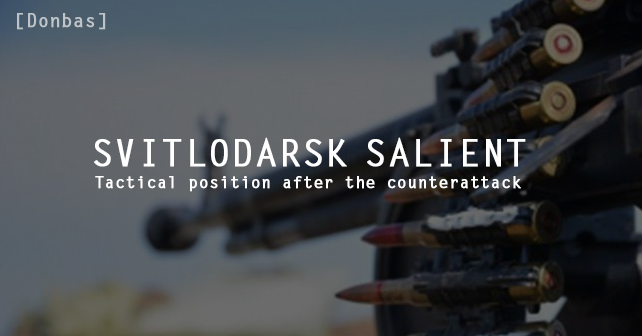 In this publication we are presenting an analysis of the situation on the Svitlodarsk salient, initially published by an ATO veteran and volunteer Yuri Rudenko in the Opinions section on Inforesist.org. We will also make an additional fact checking note on the sides.

The Svitlodarsk salient is called this way for a reason. After withdrawal of the Ukrainian Army from Debaltseve in February 2015, the contact line in this area formed a bulge skirting Luhanske and running into Vuhlehirsk reservoir from west.

The terrain in the area is rough, rather hilly with scant settlements. In combination with the enemy’s reluctance to entrench themselves in the open steppe area it offered a tactical gap to our troops, therefore the tactics of “creeping offensive” had been bringing positive results since February 2016. So that by digging trenches and building strong log-and-earth dug-outs we managed to push the line of contact some distance away from the strategically important thermal power stations (TPS) of Myronivsky and Vuhlehirsk.

Keeping in mind that according to the second Minsk agreement Debaltseve and neighboring areas were confirmed as controlled by Ukrainian Government, all actions of our troops in this area are within the provisions of the mentioned agreements.

At the same time, this area is located at the junction between so called Luhansk People’s Republic (LPR) and Donetsk People’s Republic (DPR) and the enemy’s defense has been seriously affected by communication issues between the “armed forces” of these terrorist organizations. It was natural for our command to use these conditions to our advantage to improve our positions both from tactical and strategic standpoint.

Further advance of several kilometers in Debaltseve direction would give us a kill zone over the M04 highway in the area of Vuhlehirsk-Debaltseve. This would complicate the enemy’s logistics in Horlivka, and probably improve Ukrainian positions in terms of counter-battery warfare by shielding north-east of Horlivka from enemy’s artillery which would shift the situation in Zaitseve, Holmivskyi, Kurdyumivka.

However understanding strategic importance of the area (commanding hills), the enemy also was trying to improve its positions there. Thus all the sides engaged in artillery duels and scout group skirmishes throughout the summer.

At the same time, resources of the Ukrainian Army and attention of the society were focused on the events in industrial zone of Avdiivka.

On June 29, 2016 it saw its first serious armored engagement. In reply to a mortar shelling, a joint tactical group consisting of units of 54 Mechanized Infantry Brigade, 25th Battalion (Kievan Rus) and scout-groups of the Right Sector attacked the enemy’s heights. The group managed to seize a strongpoint, its commander, lieutenant Kalimullin Airat Natikovich, Russian citizen from Tatarstan, was killed in action.

According to the information available to InformNapalm, lieutenant Kalimullin was not killed in that battle, despite wide erroneous reporting of the fact by mass media. In July 2016 InformNapalm volunteers met one of the participants of this battle on Svitlodarsk salient. He showed us the passport of lieut. Kalimullin lost on escaping from the position, as well as a leave pass in the name of Aleksander Galkin, a sniper in Kalimullin’s command. There was a cell-phone number written on the back side of the slip. A probing call helped us establish additional facts as well as prove that lieut. Kalimullin was alive.

However the enemy’s artillery started shelling these positions and due to low quality of the fortifications we had to retreat having destroyed the enemy’s heavy weapons. Ukrainian Army losses in that battle: 2 killed, 10 wounded. Enemy loses: approximately 20 killed (including 6 POW’s killed by the “friendly” artillery fire).

Until December 2016, the situation on Svitlodarsk salient remained static, but on December 18 another battle happened on a totally different scale.

On December 18, a company task force started a local offensive to neutralize positions of the enemy in the wooded area to the east of height 231.6 (enemy’s platoon strongpoint code-named Pasha in winter 2015). It was constantly used for shelling in different directions, including Vuhlehirsk TPS, threatening to disrupt electricity and heating supply to the city of Bakhmut and surrounding villages. In order to clean up the wooded area it also became necessary to neutralize the strongpoint on height 216.8 (code-named Kikimora by the enemy). 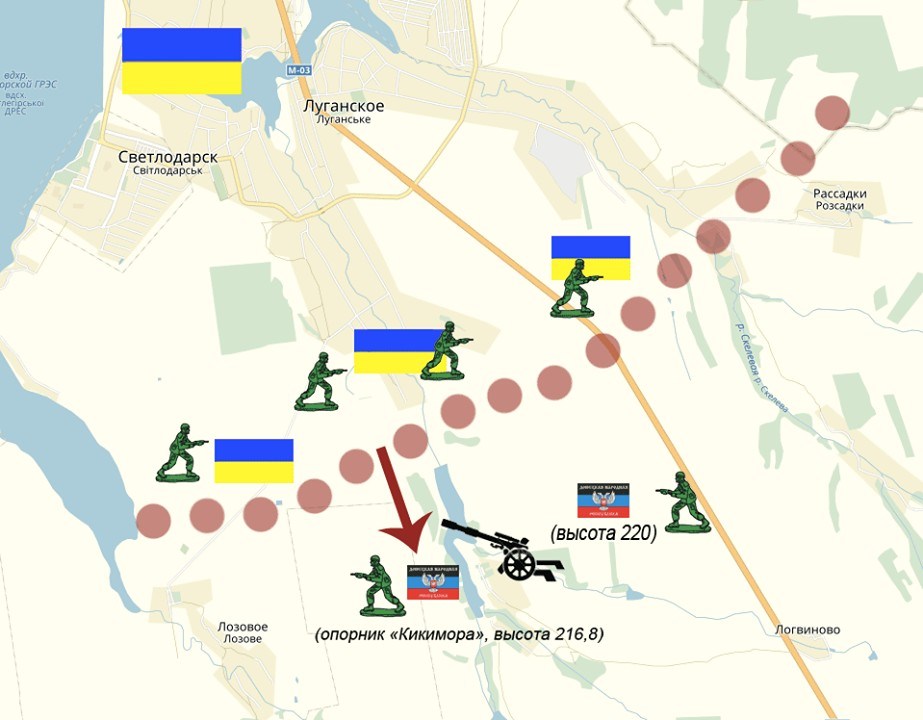 The operation started at about 6 a.m. Terrorists had improved their positions and put up a strong resistance. They requested artillery support, and during the day a local attack grew into a serious operation with use of reserves and armor. Besides artillery duel, there was close-in combat on distances from 10 to 200 meters and several counter-attacks.

Ukrainian Army took serious loses: 8 killed, 30 wounded (by the moment of writing of this article). Enemy’s loses (according to data from different sources) approximately 20 killed. By the end of the first day of battle, the stronghold at height 216.8 was in the hands of Ukrainian Army, ammunition delivery and personnel rotation was established. Important part in evacuation of the wounded was played by the volunteer paramedics from ASAP group.

By evening of December 18, social networks and news websites erupted in panic. Pro-Ukrainian segment mostly discussed Ukrainian Army loses, whereas pro-Russian media painted the local operation of Ukrainian Army as a massive offensive towards Debaltseve and cried foul about another violation of the Minsk Agreement by Ukraine, forgetting that all of Debaltseve area was supposed to be under Ukrainian Army control according to the second Minsk Agreement.

On December 19, the combat continued, but less intensively, mostly artillery was used. Reserve units of the 17th Armored Brigade were placed on operational alert to neutralize any probable attack by the enemy’s reserves. However, it did not get to the deployment of tanks, and all the enemy’s attacks were repelled by the forces in place.

As of December 20-21 it is still not clear if the battle has ended, but the intensity of fighting has subsided. The situation will most probably develop further. The reason is that positions taken by the Ukrainian Army give a line of sight over M04 highway in the area Vuhlehirsk – Debaltseve. They also make neutralization of the enemy’s artillery in the area of Holmivskyi – Bairak – Hurty much easier. These factors can potentially reshape the contact line in these areas. 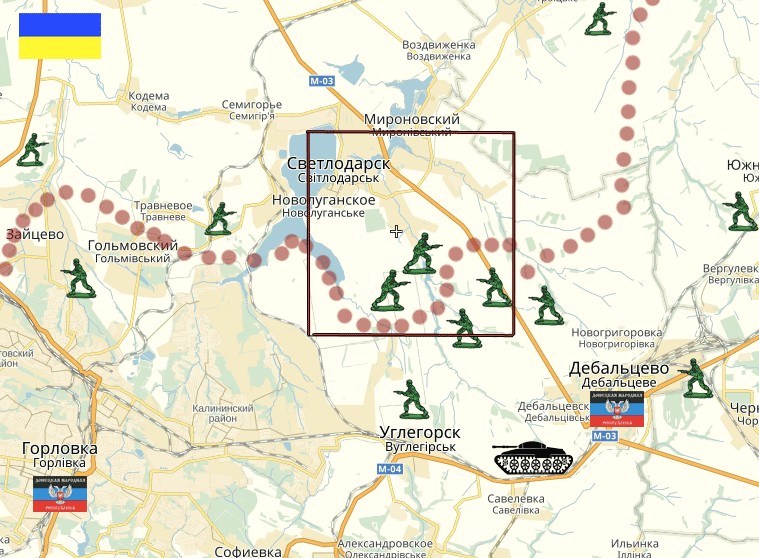 In the current situation, it is likely that enemy will try to regain the height 206.8. At the same time Ukrainian Army will need to take the neighboring height 226.7, effectively repeating the actions of the Russian army in 2015 when they seized Lohvynove.

Also we should count that Lohvynove has lost the importance it had in February 2016, when main battles were fought for control over the portions of Kharkiv-Rostov highway. On the way to the commanding height in this area (height 309, used to be code-named Valera) our forces will face the necessity to control heights near Lohvynove, and that will cause shifting of the whole contact line.

By now, the contact line has two reciprocal double-edged salients and neither Ukrainian Army nor the enemy will be satisfied with the status quo. As new US President is about to assume the post, OSCE monitoring mission is heading into Christmas Hollidays, and we are awaiting the arrival of the next Putin’s “humanitarian convoy”, we should brace for a new escalation in the Debaltseve area.

(CC BY 4.0) This information has been specially prepared for InformNapalm.org,an active link to the authors and our project is obligatory for any reprint or further public use of the material is obligatory.

No Responses to “Svitlodarsk salient: tactical situation, achievements and perspectives”