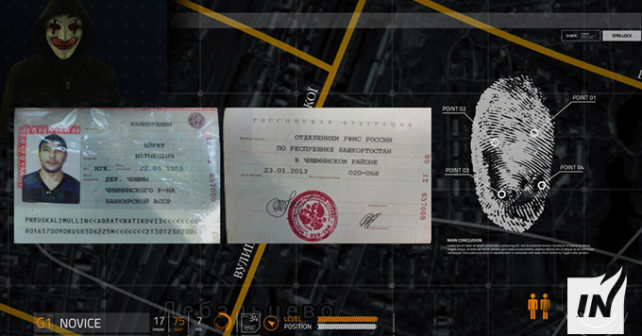 We met a Ukrainian volunteer serviceman in a park in Kyiv on July 17. He serves in the unit that participated in the counterattack in the Svitlodarsk arc on June 29. We met to see the documents of citizens of Russia found near a killed separatist sniper and among the abandoned belongings of Russian terrorists. 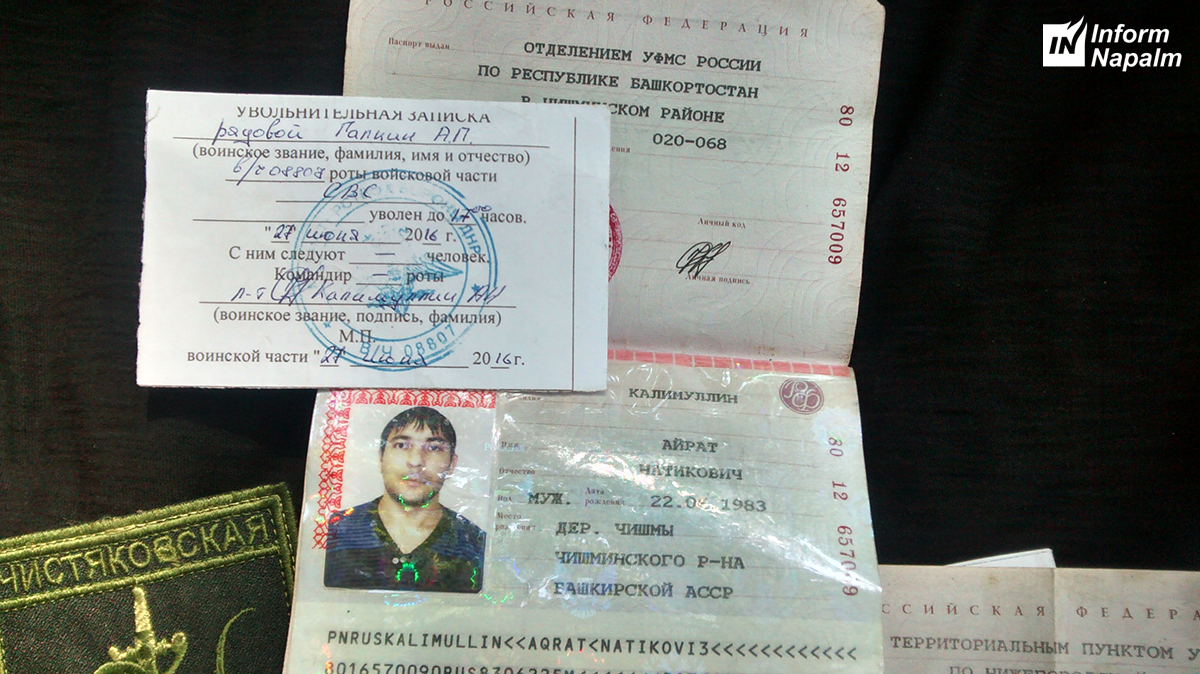 For over two years, the international volunteer community InformNapalm has been investigating and recording the participation of Russian professional military servicemen in the war in Donbas (database). Russian citizens participate in the war, claimed by Russian propaganda to be exclusively “civil”, as mercenaries as well. Here is one example. 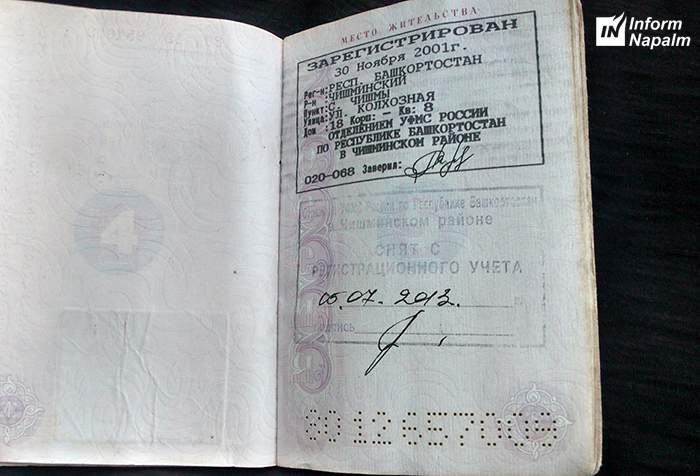 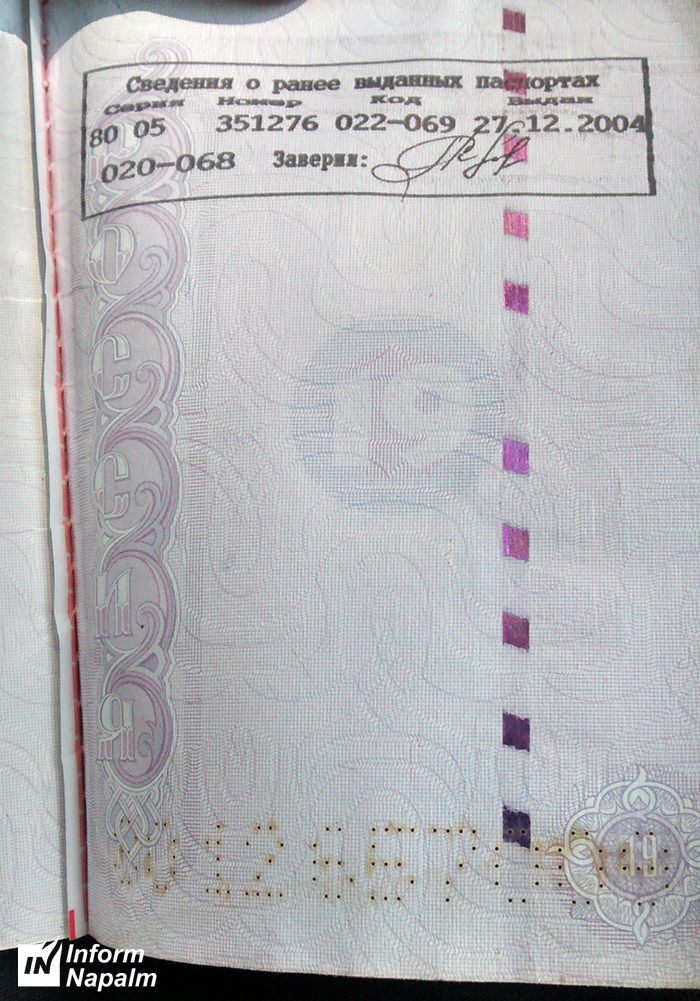 We are looking at the passport of Airat Natikovich Kalimullin , a citizen of the Russian Federation, and taking pictures of every page. Our interlocutor explains that the passport was found in the jacket of a Russian uniform with lieutenant straps, dumped on the separatists’ positions. In the nearby dug-out, a combatant sniper Russian citizen Aleksandr Petrovich Galkin was killed (we have one page of his passport, a leave ticket and a “LPR temporary identity card”).
Cans of Russian army stew, first aids kits with Russian medicines, assault rifles and a SVD sniper rifle (make 1967), wrapped with camouflage net, with an inscription on the belt “Ptitsa” (call sign of A. Galkin), a sniper kit, a shooting record, as well as 7.62 and 5.45 rounds of ammunition were found in the dug-out of the terrorists snipers, who were constantly shooting at the Ukrainian military personnel.

After a successful counterattack and elimination of the enemy’s position, the Ukrainian soldiers got the command to retreat and not occupy the cleared position.

Earlier, the media reported about this fight, posting a photo of a “LPR military ID card“ issued to Airat Kalimullin. Thus, journalists concluded that the documents found on the dead militants and next to them automatically pointed to the death or captivity of their owners. However, InformNapalm has discovered that the Company Commander Lieutenant Kalimullin was in such a hurry to turn tail from the battlefield that he dumped all his belongings, as well as his subordinate personnel. His subordinate sniper Galkin, whom Kalimullin signed a leave card just two days earlier, was killed during the counterattack.

Later the Lieutenant even gave an interview to the terrorists’ propaganda channel News Front, where he with uncertainty and missing words made some clumsy comments a-la Viktor Yanukovych: “I’m alive, I’m legitimate.”

During further exploration of open information sources and monitoring of social profiles, we haven’t found any explicit proof that the Russian citizens Kalimullin and Galkin were the servicemen in Russian military. A passport issued on 04.02.2014 and distinguishing marks of Mr. Galkin only indirectly may indicate that prior to the Russian hybrid war in Donbas he could have served his criminal sentence and may have been released under a special obligation “to assist in the protection of the Russian world.”

Interestingly, that on the backside of Galkin’s leave ticket signed by the company commander Lieutenant Kalimullin, a phone number 095-408-14-62 (Tatarin) was written. 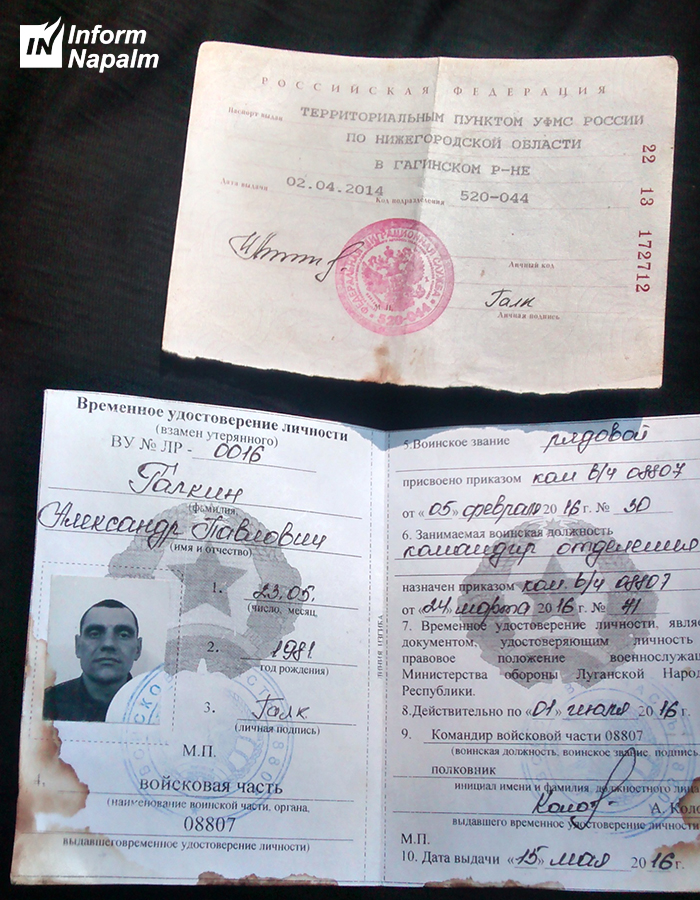 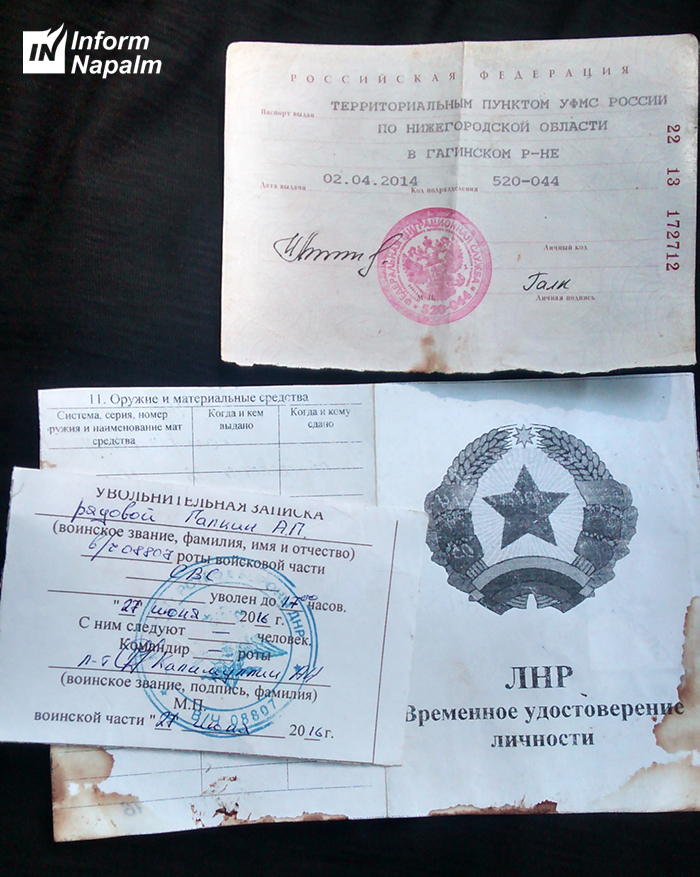 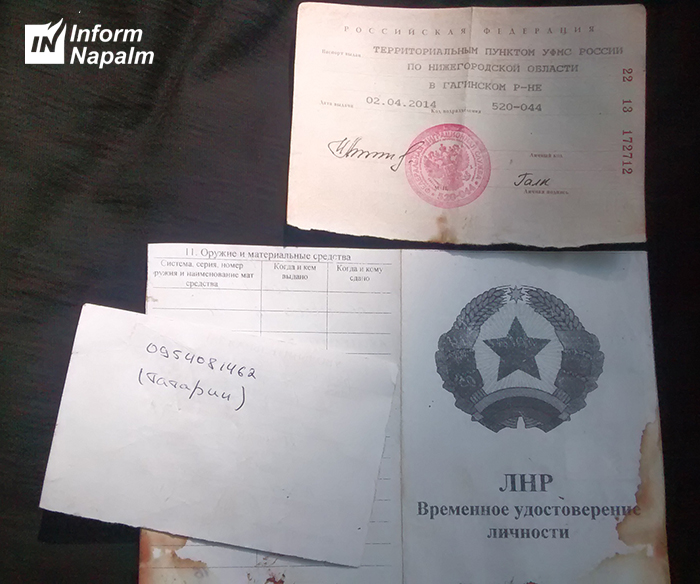 InformNapalm volunteers hypothesized that this phone number belongs to a Russian citizen, separatist Company Commander Lieutenant Kalimullin. They called the number and confirmed the identity of the Russian terrorist and even located the fugitive Commander in Debaltseve.

Thus, a high density of Russian citizens, both professional soldiers and mercenaries, on every square kilometer of occupied Ukrainian territories of Crimea and Donbas, indicates that this war is not an internal civil strife, but an intervention of the Russian Federation.

In this regard, a recent appeal by the Ukrainian Canadian Congress to the world community to recognize Russia as a sponsor of terrorism is completely logical and consistent.

International volunteer community InformNapalm supports this step and calls for the tightening of sanctions against Russia.  Not only Ukrainians but citizens of other countries suffer as a result of terrorist activities by Russia, including the passengers of flight MH17, shot down in the sky over the occupied part of Donbas exactly 2 years ago.

This article was prepared by volunteers of the InformNapalm international community.

7 Responses to “Citizens of Russia: Killed Sniper and Quick Call to Company Commander”