The court as banned a book about the trial of Vasyl Stus, boosting its popularity. Reactions in social networks 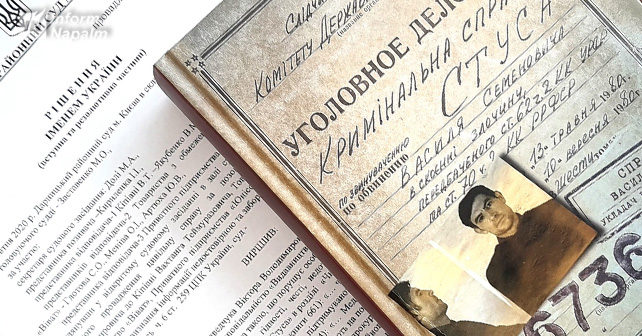 According to BBC Ukraine, in the morning of October 19, Darnytskyi District Court of Kyiv partially upheld the complaint of Viktor Medvedchuk, Vladimir Putin’s kum (Putin is the godfather of Medvedchuk’s daughter) and banned the distribution of the journalist Vakhtang Kipiani’s book “The Case of Vasyl Stus”.

“Kipiani and the Vivat publishing house are compelled to remove all information about Medvedchuk’s identity from the book in the sections “Criminal case No5. The book of life and the death of Vasyl Stus” and “Did the lawyer Medvedchuk kill the poet Vasyl Stus”. Prohibit Kipiani and the Vivat publishing house from distributing the printed circulation of the book “The Case of Vasyl Stus” and its subsequent printing until the illegal violation of Medvedchuk’s personal privacy is remediated,” the judge announced.

The court’s decision has not yet entered into force and will take effect if Vakhtang Kipiani does not file an appeal within the next 30 days.

Viktor Medvedchuk has not yet commented on the court decision, and Vakhtang Kipiani responded to it with a short post on his Facebook page with a quote from Vasyl Stus:

“A bunch of bandits, KGB men, thieves and rapists in the capital occupied the city as the party of Bolsheviks.”

Many other Ukrainians also responded to this event in social networks. The former head of the Ukrainian Institute of National Remembrance, the deputy of the Ukrainian Parliament (Verkhovna Rada) of the IX convocation Volodymyr Viatrovych wrote on Twitter:

“In Ukraine, Stus is banned again. We’ll have to defeat the sovok yet again. And we’ll do it.”

“Stus is eternal! And Medvedchuk is just a temporary misunderstanding in the history of Ukraine. Once again, I thank Vakhtang Kipiani for his titanic work and tireless struggle against the Kremlin satellite and the Communist lackey! And to all presidents of Ukraine – my “sincere thanks” for the creation of the judiciary that keeps surprising us by going lower and lower!”

“It seems Vasyl Stus has been sentenced for the second time, this time in the Independent Ukraine, and this the second time is because of the same person, the torturer and collaborator Medvedchuk… You know, we have to be at the appeal. For if we miss it, then the Stalinist Kolyma concentration camps will soon come to each of us.”

A well-known Ukrainian blogger, journalist Denis Kazansky, who joined the Three-party Contact Group negotiating the settlement of the situation in Eastern Ukraine as a representative of Donetsk Oblast, noted on Facebook:

“. .. Egor Firsov proposed to show Medvedchuk what the “Streisand effect” is and organize a flashmob. Putin’s kum wants the information in the book about his crimes not to be distributed. Well, let’s do everything to make the whole country learn about this book and the “heroics” of the leader of the Opposition Platform party – from a schoolboy in Kramatorsk to a grandmother in the village of Velyka Kosharyshcha… “

The Ukrainian diplomat, former Minister of Foreign Affairs of Ukraine Pavlo Klimkin also commented on the event on Facebook:

“Everyone resents the court decision that upheld Medvedchuk’s claim against Vakhtang Kipiani regarding his book “The Case of Vasyl Stus”. The outrage is 101% fair, but the promotion the original Vakhtang’s text gets thanks to the decision is fantastic! Now everyone will consider it their duty to get and read the original – Ukrainians will look at Stus’s case through the eyes of Kipiani, not Medvedchuk. So, there is a positive side even in the decisions that look very similar to censorship and thus have caused a lot of unprintable words from the public”.

And it seems that the court decision, which caused outrage in the Ukrainian society, did become a catalyst for the book’s wild popularity. The author and editor of the book, Vakhtang Kipiani, and the marketing director of the Vivat publishing house Kateryna Avramchuk reported on Facebook that the book was sold out in a matter of hours and a new print is planned, which will be distributed while the court decision hasn’t come into force and is still subject to appeal.

“And who are the judges?”

Vakhtang Kipiani also said on his Facebook page that, based on the data by the Anti-Corruption Action Centre expert Galina Zhizhyk, the crooked judge in this case, Maryna Zastavenko, had visited the occupied territories during the war:

“The decision to ban the mentions of Medvedchuk in the book by Vakhtang Kipiani about the trial of Stus was made by a judge from Donetsk, who in 2017 was close to being fired for her ties to the so-called “DPR”.

Prior to transferring to Kyiv, Maryna Zastavenko worked in Chervonogvardiysky district court of Makiyivka, Donetsk Oblast.

In 2016, the SBU (the Ukrainian state security agency) appealed to the High Qualification Commission of Judges, indicating that the judge had property in the temporarily occupied territories and was systematically traveling back and forth. At the same time, the judge did not show up at the court bench for a long time, because she was in the territories not controlled by Ukraine.

The HQCJ initially opened a disciplinary case, but then refused to dismiss Judge Zastavenko.

It is unlikely that a Ukrainian judge can safely ride in and out of the “DPR” without receiving a guarantee of security from “the other side,” especially given how eager the Russians were to replenish the numbers of their prisoners for subsequent swaps. That is why the SBU wrote complaints against such judges to the HQCJ”.

This publication was prepared especially for InformNapalm. Translated by George Pinchuk. Edited by Max Alginin.  Distribution and reprint with reference to the source is welcome! (Creative Commons — Attribution 4.0 International — CC BY 4.0)

No Responses to “The court as banned a book about the trial of Vasyl Stus, boosting its popularity. Reactions in social networks”