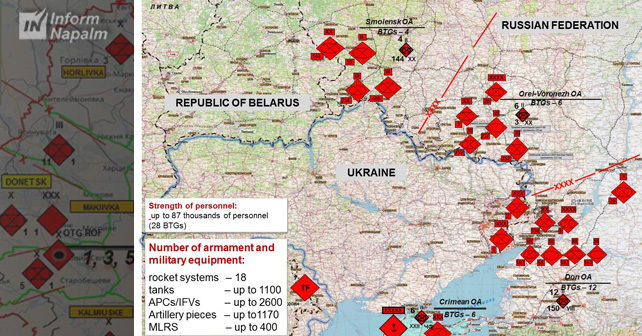 Ukraine has transferred to the OSCE intelligence about the presence of the Russian troops near its borders, as reported by Ukrinform.

Ukrainian and American experts, as well as the Chief Directorate of Intelligence of the Ministry of Defense of Ukraine warn that under the pretext of the Kavkaz-2020 strategic exercises Russia could launch a large-scale offensive against Ukraine. The Russian president has recently signed a decree on the recalling reserve military personnel from the reserve “for military training”, without specifying any specific date for the training. And this points to the increased likelihood of an offensive: the decree may be an attempt to conceal mass mobilization.

These facts raise the question: what number of troops is Russia prepared to deploy against Ukraine? How much military hardware does Russia have at its disposal? In general, the answers to these questions were heard on July 1, at the OSCE Forum for Security Co-operation.

As Ukraine is currently chairing this decision-making body of the OSCE, on July 1 the issue of the implementation and modernizing of the Vienna Document 2011 on confidence and security building measures was raised. The main speaker from Ukraine was the head of the Main Department of International Cooperation and Verification of the Armed Forces of Ukraine, Lieutenant-General Leonid Holopatyuk. He pointed to the transformation of the occupied territories of Donbas into a “gray zone”, where the OSCE’s arms control regime is not ensured, whereas confidence and security building measures are not being implemented.

Another destabilizing factor is the militarization of the occupied Crimea. Non-transparency of military exercises in the Russian Armed Forces does not contribute to confidence.

OCCUPATION CORPS IN THE DONBAS IS BIGGER THAN SOME EUROPEAN ARMIES

“The Russian Federation, within the framework of the Global Exchange of Military Information, should provide data on the number of troops, weapons and military equipment of the Russian Armed Forces deployed in Ukraine,” said Holopatyuk. He emphasized the need to develop effective mechanisms for international control over the military activities of the Russian troops deployed in the temporarily occupied territories of eastern Ukraine and the Crimea.

The Ukrainian general noted that today, near the border with Ukraine, Russia has already created three combined arms forces  “which are capable of carrying out sudden limited-objective offensive operations on the territory of Ukraine without mobilization and with minimal preparation.” This analysis does not take into account the highly militarized Crimean peninsula and the occupied parts of the Donbas, where the army corps deployed by Russia outweigh whole armies of several European countries in terms of personnel and fire power.

Setting up of a group of Russian occupation forces in the temporarily occupied territory of Donetsk and Luhansk Oblasts composed of the 1st (Donetsk) and 2nd (Luhansk) Army Corps (AC) lead to a large increase in the numbers of armaments and military hardware in eastern Ukraine.

The combat structure of the 1st AC includes:

The combat structure of the 2nd AC includes: 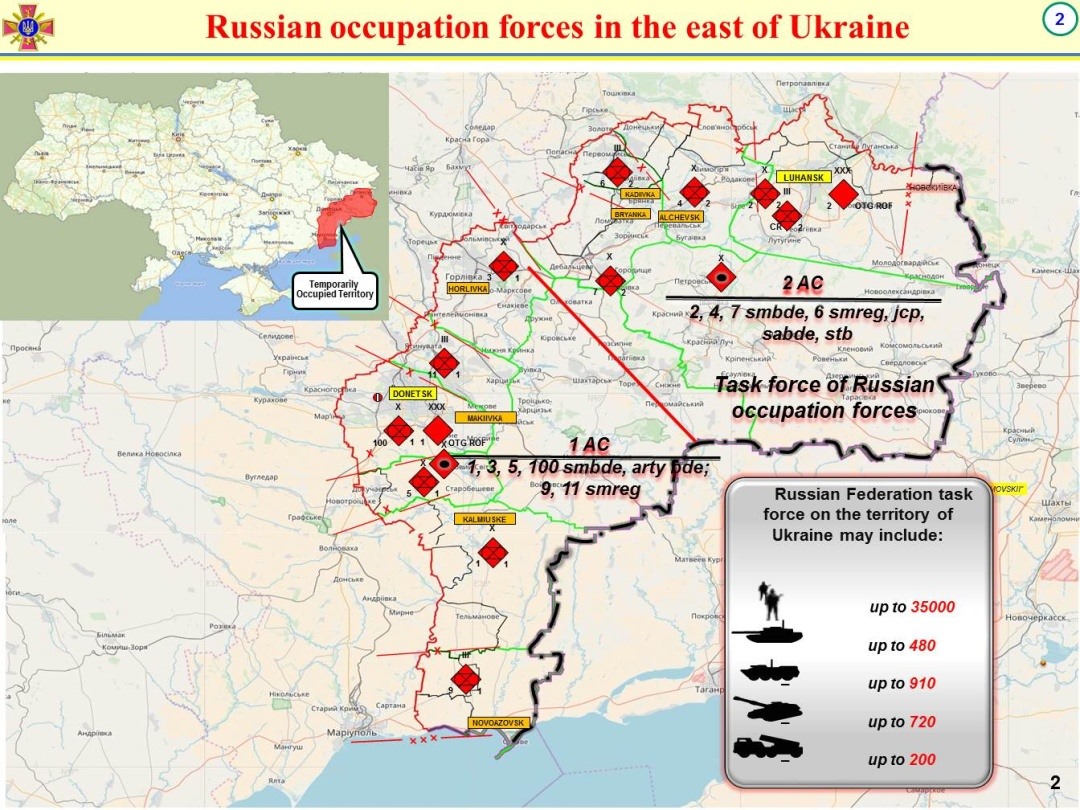 The staff numbers of the 1st and 2nd AC is about 35 thousand military personnel.

At the same time, command and staff positions, as well as all specialist positions in the 1st and 2nd ACs, are filled by the active-duty personnel of the Russian Armed Forces with a total number of about 650 military men.

In addition,, there are operational / combat and logistic support units, military advisers, and instructors of the Russian Armed Forces deployed  in the temporarily occupied territory of Donetsk and Luhansk Oblasts. Their total number is about 2,100 men.

CRIMEA TURNED INTO A “CARRIER DECK”

Due to the militarization of the occupied Crimea, the peninsula has virtually become a  “carrier deck”, housing a powerful combined arms group with land, air and sea components numbering about 32,500 military men.

In addition, coastal defense forces were set up and groups of the Federal National Guard troops (up to two brigades) and the border service of the Russian FSB were redeployed.

There is an active buildup of the attack capabilities of the Russian Armed Forces illegally based on the peninsula, by increasing the personnel strength and equipping them with new types of weapons and military hardware. 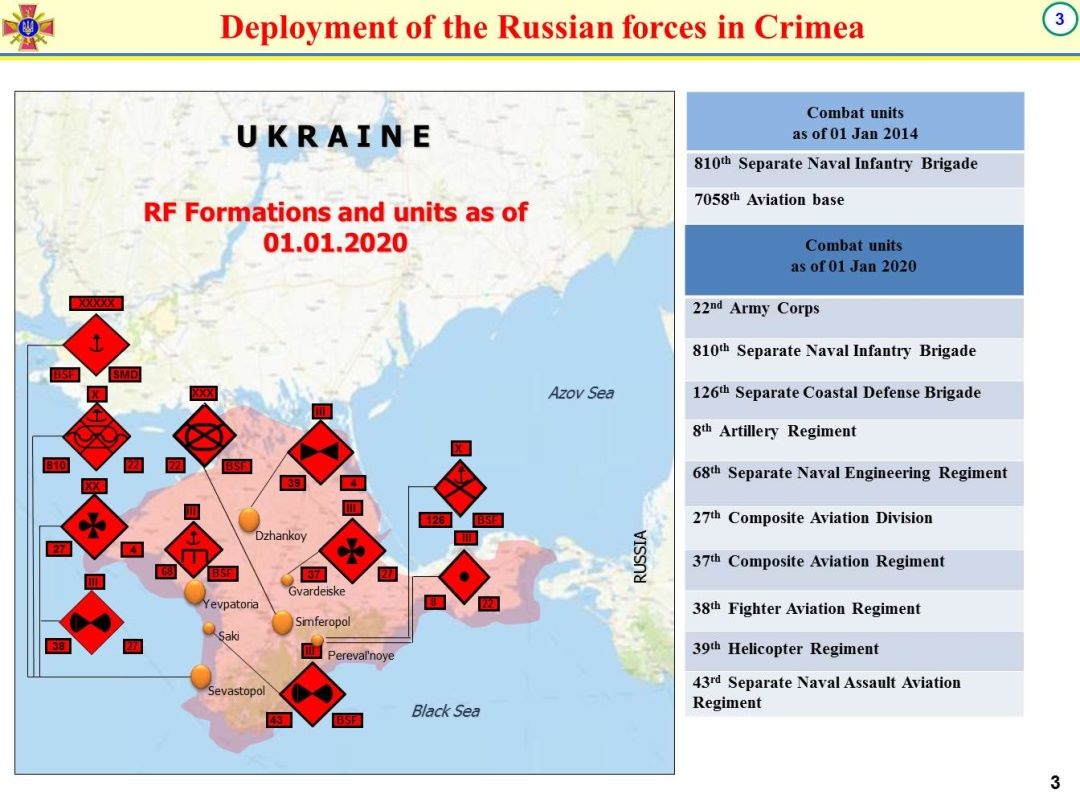 The core of the ground component is the 22nd Army Corps, whereas there are plans to build up a field army and the 810th Marine Brigade on the basis of these forces. Six battalion tactical groups are now ready for combat deployment.

The air component is enhanced by the deployment of bombers, fighters and strike fighters as well asmilitary airlift wing on the peninsula.

Belbek and Hvardiyske airfields were reconstructed to accommodate Russian long-range bombers. Infrastructure is being prepared for the storage of nuclear weapons in Crimea.

The combat capabilities of the navy component have been enhanced with the adoption of the latest attack ships and submarines carrying of naval cruise missiles of the Kalibr type (up to 70 warships and boats, 6 submarines, capable of joint salvo of 84 missiles).

Even according to official data provided by Russia as part of the annual information exchange in accordance with the Vienna Document 2011, the numbers of armaments and military hardware of the Russian Armed Forces in Crimea has almost tripled over the past six years. 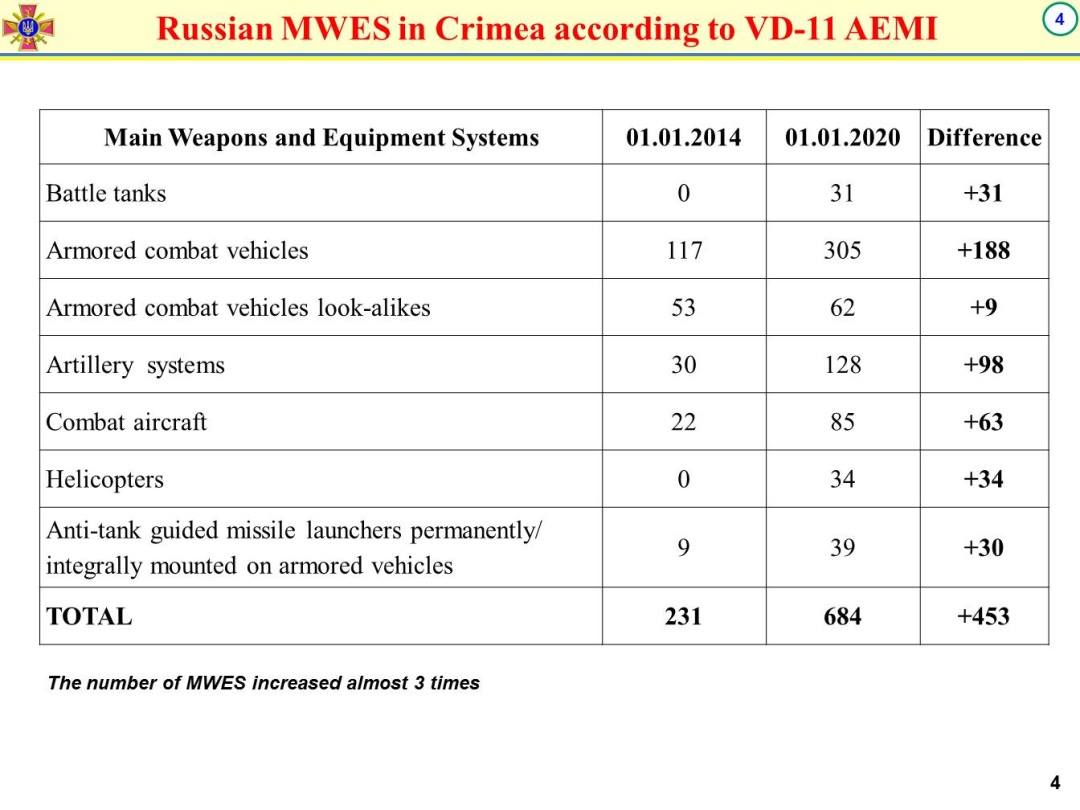 So, according to the Vienna Document data from Russia, as of January 1, 2020, there were 684 items of armament and military hardware in Crimea, and this is 453 more than January 1, 2014. In particular, after the occupation of the peninsula, Russia transferred 31 battle tanks, about 200 armored fighting vehicles, almost 100 artillery systems, as well as 63 combat aircraft and 34 combat helicopters.

Russia continues to build up forces along the state border of Ukraine, in particular, by actively forming new military units (forces and groups) and the upsizing of existing formations to build up their combat potential. Today, 28 battalion tactical groups are deployed along the border.

The formation of three new large units is nearing completion – two armies and an army corps, which should reach full operational readiness in 2020 and 2021. 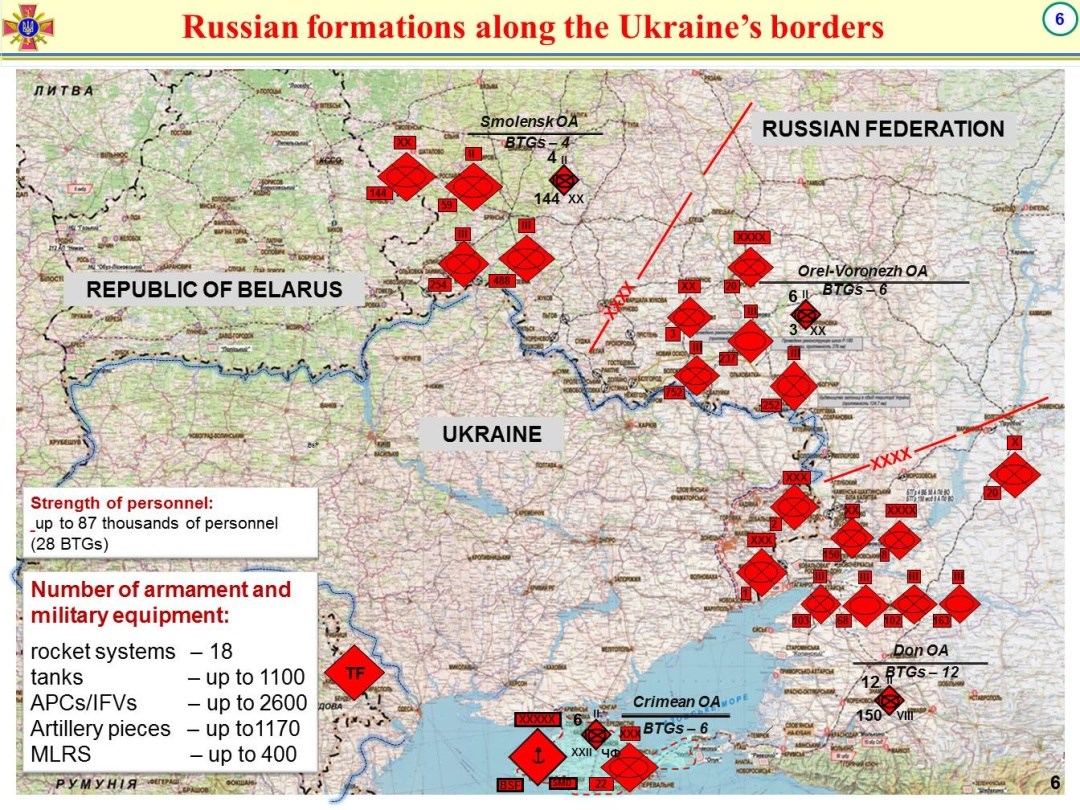 In the ground component in the Western Strategic Area, the 20th Field Army was set up comprising the 3rd and 144th Motorized Rifle Divisions. At the same time, 448th Missile Brigade of the 20th Army is equipped with Iskander short-range ballistic missile system (SRBM).

In the South-Western Strategic Area, the 8th Field (Assault) Army was created on the basis of the 150th Motorized Rifle Division, the 20th Motorized Rifle Brigade and the operationally subordinate 1st and 2nd Army Corps. Setting up of the missile brigades armed with Iskander SRBMs is envisaged in the district and the army.

In general, the personnel strength of the Russian ground force along the Ukrainian border is estimated at 87,000 military men, up to 1,100 tanks, up to 2,600 armored combat vehicles, up to 1,100 artillery systems, up to 360 multiple launch rocket systems, 18 SRBMs.

There is ongoing re-equipment of the air force with modern and modernized types of aircraft (Su-30SM, Su-35S, Su-34, Su-25SM3, MiG-31K aircraft with the Kinzhal hypersonic air-launched ballistic missile and helicopters of various modifications). In total, about 330 combat aircraft and 230 helicopters have been redeployed to base airfields near the border.

The formation of mobilization support centers is also under way. These centers can form up to four combined arms divisions (Boguchar, Kamensk-Shakhtinsky, Novoozernoye, temporarily occupied territory of the Autonomous Republic of Crimea).

Thus at present, three combined arms forces have already been built near the border with Ukraine, capable of carrying out unexpected offensive operations on the territory of Ukraine without mobilization and with minimal preparation.

Read and share more on this topic from InformNapalm