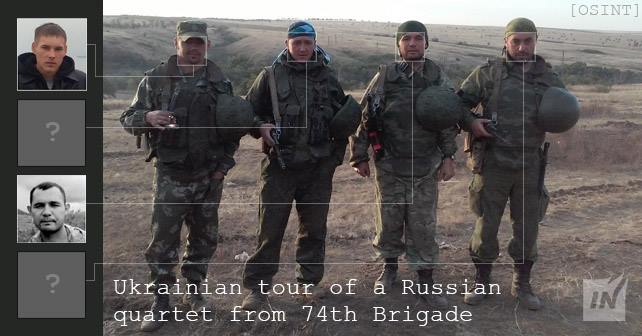 We have identified another war criminals – artillerymen from tactical group of the 74th Separate Motorized Rifle Brigade (74th SMRB) of Russian Army who fought in the Donbas in 2014.

For three years now, Russia has been fighting undeclared war against Ukraine. During this time InformNapalm volunteer intelligence community has performed enormous work identifying Russian servicemen who executed Kremlin’s illegal orders. We back our investigations by visual proofs. Hundreds of aggressors has been identified already, and this job is in progress. Our goal is to identify each participant of this infamous war because each revealed fact harms reputation of the aggressor country which sooner or later will pay for everything.

The new OSINT investigation of InformNapalm volunteer intelligence community is based on the picture that was taken during a “Ukrainian mission” of Russian artillerymen from the 74th Separate Motorized Rifle Brigade (the 74th SMRB, military unit 21005, the town of Yurga, Central Military District). The battalion tactical group from this unit took part in hostilities in the Donbas in summer – autumn 2014. The 74th SMRB has appeared on the InformNapalm’s radar several times before. This unit discredited itself not only during the so-called “Rostov-Ukraine missions”, but in the “Syrian missions” as well. Later on, some servicemen from the 74th SMRB had been spotted within “Novorossia” Illegal armed groups.

In April 2017, InformNapalm published an article on identification of the 8 war criminals – mortar crewmen from a tactical group of the 74th SMRB who fought in the Donbas in 2014. 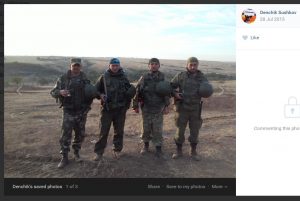 This photograph analyzed in this story was taken from our community’s archives. The original of this photo, posted in July 2015 on the 74th SMRB serviceman’s page, has already been deleted. In the picture there are four Russian soldiers wearing non-standard uniforms. The landscape and season look similar to the ones from the previous publication. 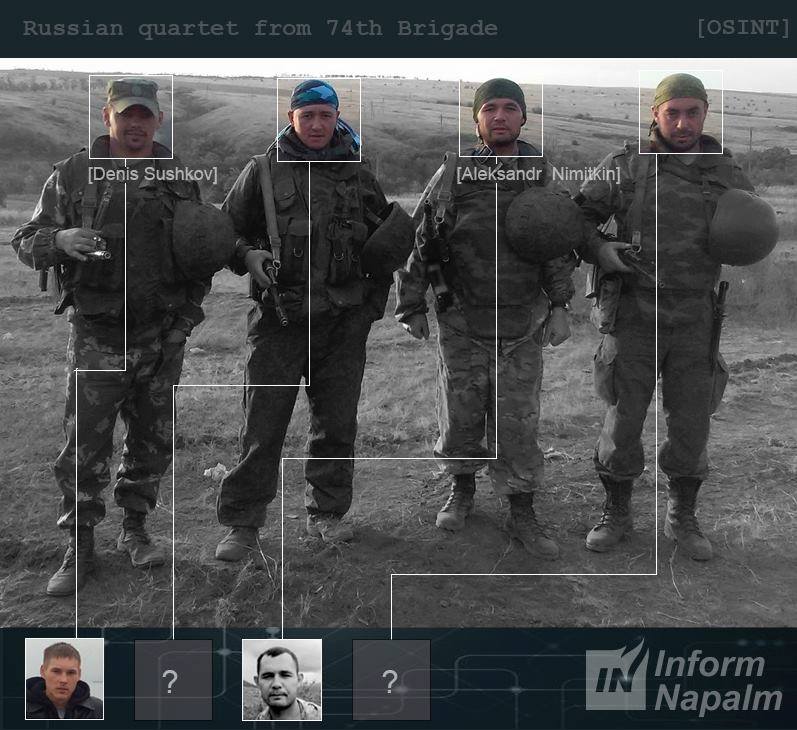 As we mentioned earlier, the picture for this investigation was taken from the account of the Russian soldier, the subject #1. 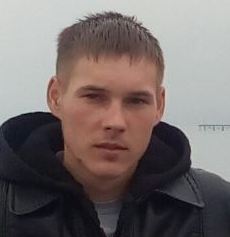 Date of birth (DOB): November 22, 1995. He is native of the city of Rubtsovsk city or the nearby village of Novoyegoryevskoye in Altai Krai.

As of summer – autumn 2014, he served in the self-propelled howitzer artillery battalion (armed by 2S3M Akatsiya 152-mm self-propelled howitzers) of the 74th SMRB. Allegedly, he became a contract soldier after a conscript service. Although the “Ukrainian mission 2014” group picture was deleted from Sushkov’s VK album, his album in OK1 contains a photo series from that period with notable comments. 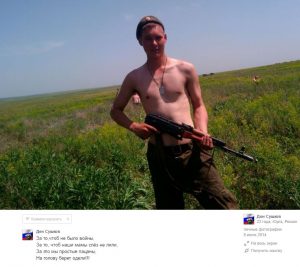 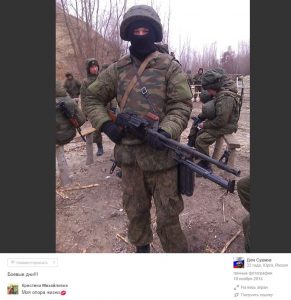 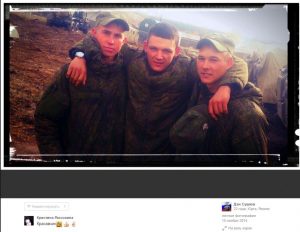 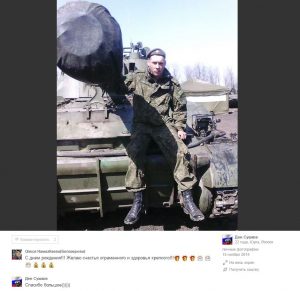 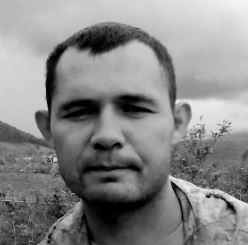 Date of birth (DOB): September 15. He is native of the city of Barnaul, Altai Krai.

As of summer – autumn 2014, he served in the self-propelled howitzer artillery battalion of the 74th SMRB. There are four Nimitkin’s accounts in social networks. Two of them are active but been sanitized recently; in particular, now they do not have any photos (some of those photos were saved in InformNapalm’s archives though). Also there are 2 inactive accounts with photos and notable comments, which helped to identify him. 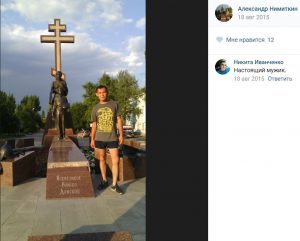 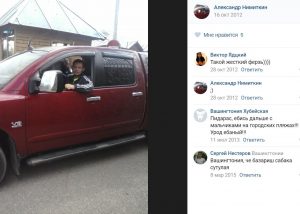 Besides the abovementioned subjects #1 and #2, we found accounts of the Russians who look very similar to the two remaining servicemen from the photograph. We emphasize that we found no connection of these people to the 74th SMRB besides them looking similar to the servicemen in the picture.

Judging by the scanty set of photos in his account, since 2014, he has been a serviceman in the Russian Army. We emphasize that we found no connection of Grigory Vasilyev to the 74th SMRB besides him looking similar to the soldier wearing a camo bandana in the group picture. His social media account: VK (profile, album, contacts archives).

– Rustam Mustafin. Native of the town of Davlekanovo, Republic of Bashkortostan. His account in VK has just a couple of photos from 2011 and then a few pictures posted in 2015. It has been inactive since. As is in the previous case, we found no connection of Rustam Mustafin to the 74th SMRB besides him looking similar to the soldier wearing an olive bandana in the group picture. His social media account: VK (profile, album, contacts archives).

We are asking our responsive readers, who time after time initiated our OSINT-investigations or brought them up to date later, to help us in identification of the two unrecognized war criminals in the photo.

Following previous findings about “Ukrainian missions” of the battalion tactical group from the 74th brigade, including InforNapalm publication from April with identification of mortar crewmen from this unit, and taking into account landscape particularities seen in this “quartet” picture (hills, similar scenery, and season), it is reasonable to assume that the picture was taken in late August – early September 2014, in Starobesheve Raion, Donetsk Oblast, Ukraine, where fierce fighting took pace, such as the battle of Ilovaisk. It is possible that the identified artillerymen from the 74th SMRB were involved in the slaughter of Ukrainian military convoys at the village of Novokaterynivka. 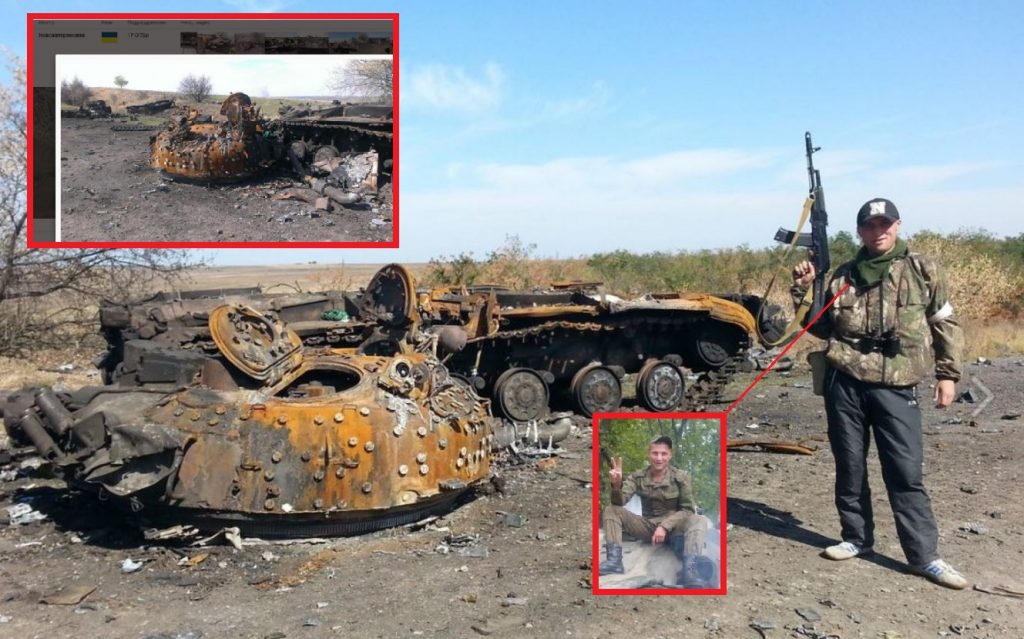 The 74th SMRB was mentioned in 8 episodes of InformNapalm investigations:

Databases of the identified Russian military personnel and evidence of their involvement in the fighting in Ukraine on the side of the Russian-terrorist forces are available here:

The structure and weapons of the 74th SMRB.