Russia’s Minister of Defense Shoygu Sent His Countrymen to Syria 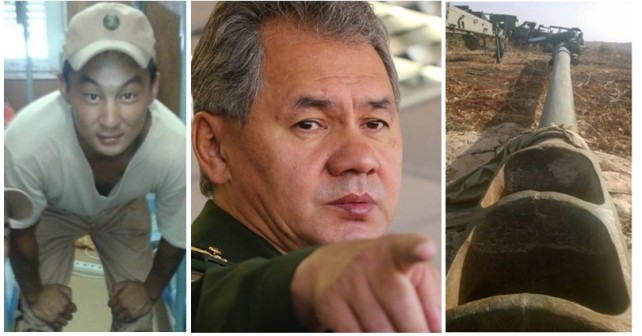 Our volunteer community continues tracking the Russian forces’ activities in the conflict in Syria. On November 2, an OSINT investigation with the photos and information about a ‘Novorossiysk-Syria assignment’ of a Russian soldier was posted on Nikolay Mahno’s Facebook page. The author of the publication agreed to the exclusive publication of his material with our complements.

Russian adventure in Syria is not limited to the air strikes only. Following the bombers, the  ground contingent of the Russian Armed Forces was transferred to the Middle East. Sergei Shoygu, the Russian Defense Minister, sent to Syria his fellow-Tuva to die for Bashar al-Assad. A profile of Ayas Saryg-Ool, a Russian serviceman from the 74th motorized rifle brigade (military unit No. 21005, Central Military District, Yurga, Kemerovo Oblast, Russia) and a native of the city of Arjaan (Republic of Tuva, Russia), was found in the VK network (profile archive, photos archive, contact archive).

On November 30-31, Ayas Saryg-Ool uploaded to his album a set of pictures taken in Syria. Some of them had geolocation markers ‘Hama, Syria’. The military equipment and arms can be found in those photos, including the damaged ‘Msta-B’ 152mm howitzers and vehicles – GAZ-66, GAZ-33081 and ‘Rys’ [Lynx] armored vehicle (Russian version of the Italian Iveco LMV). All of them were without military markings, as usual. The pictures contain the Syrian landscapes and Ayas Saryg-Ool together with his comrades-in-arms dressed in the Russian army’s desert outfit sitting in a container modular barrack. 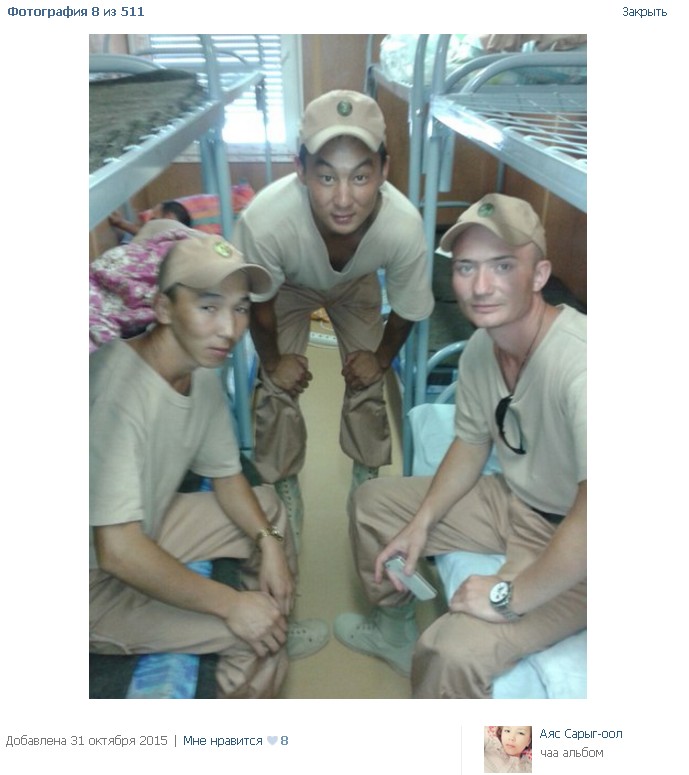 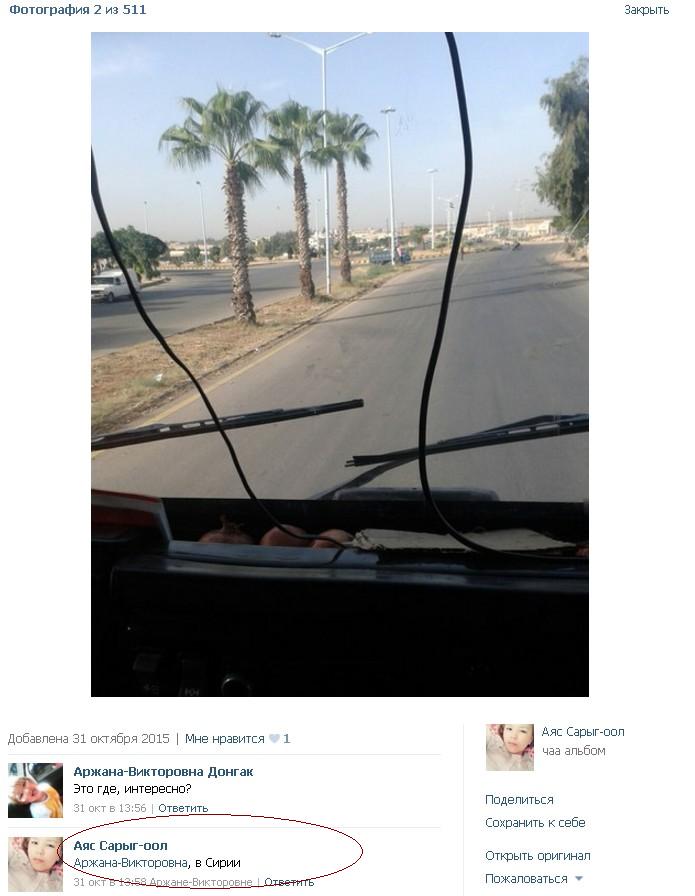 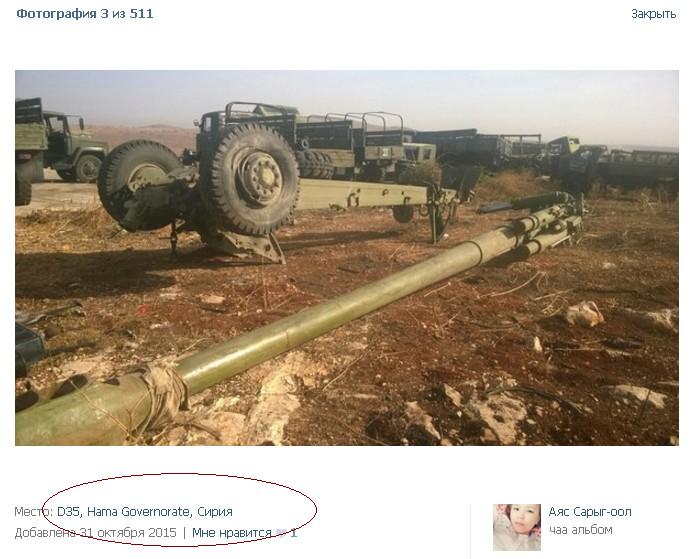 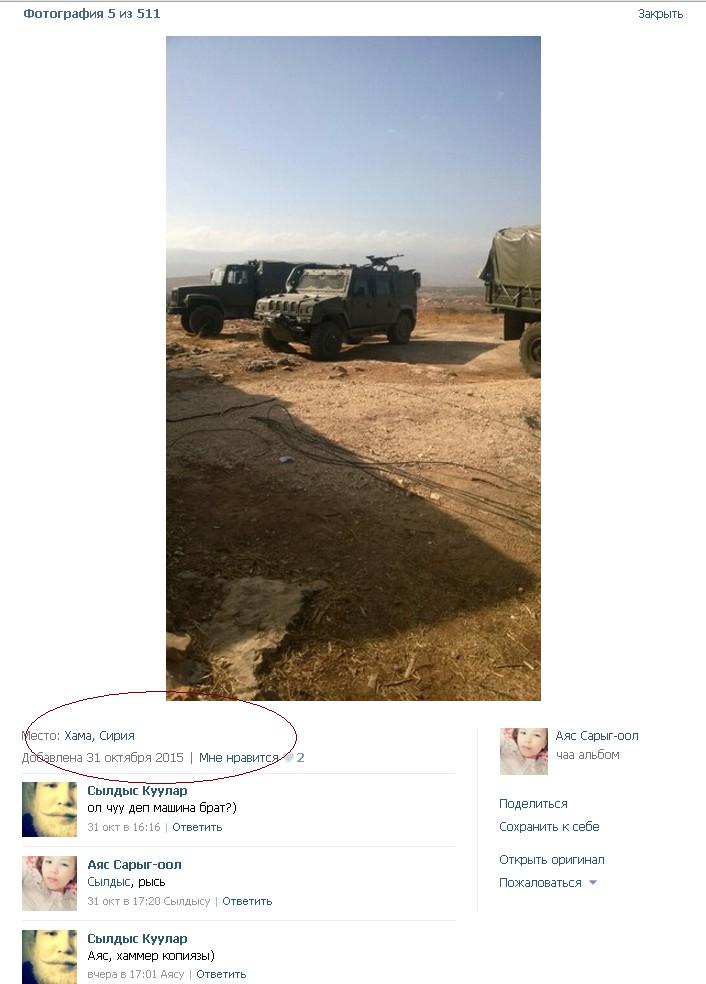 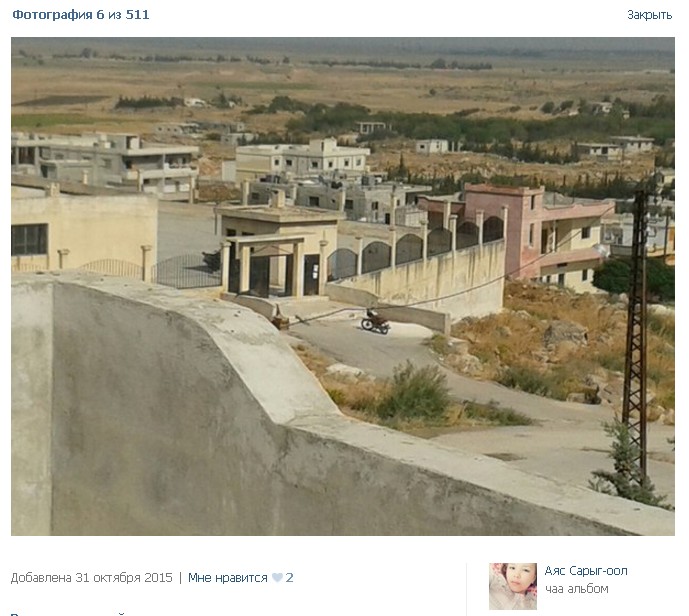 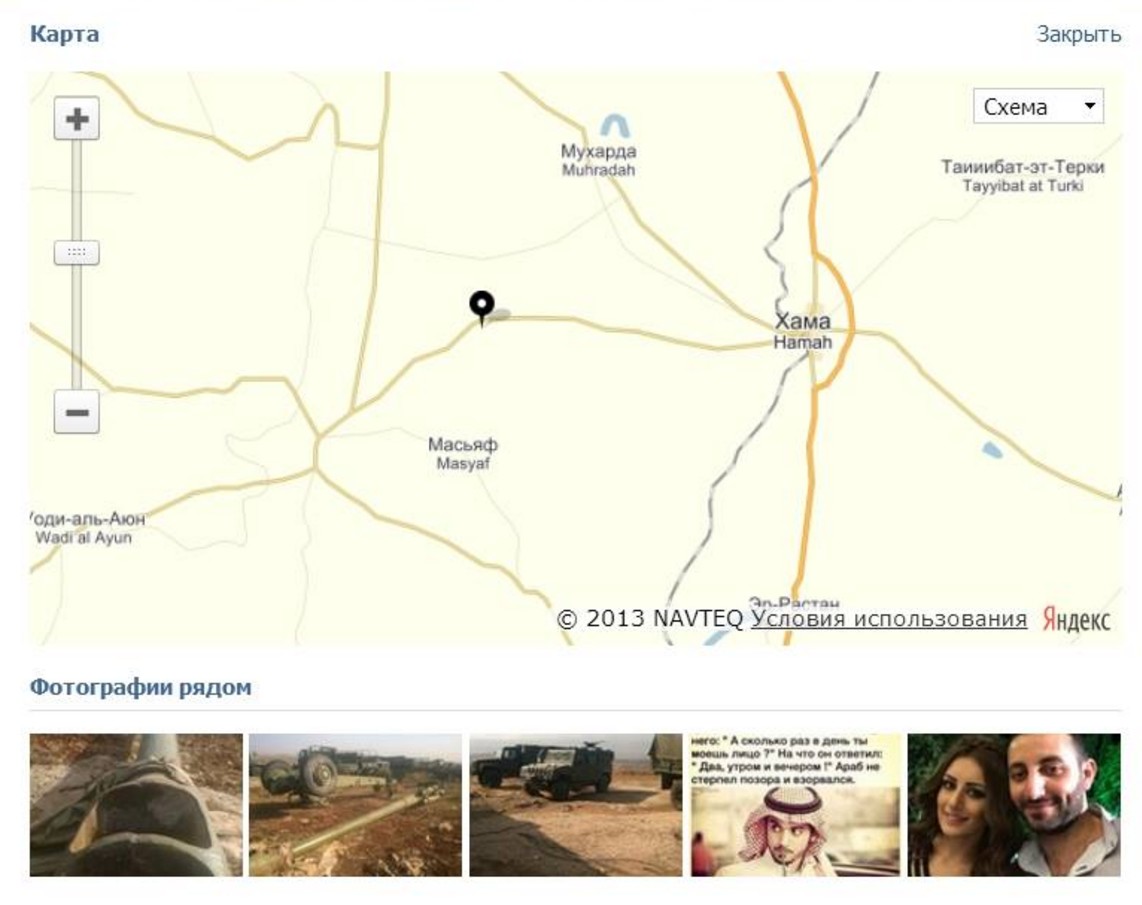 Note: As it is known, ‘Msta-B’ and ‘Rys’ are not in service of the Syrian army. As for the howitzer – this is the second registered case. Also not so long ago the Russian ‘Solntsepyok’ heavy flamethrower systems were transferred here.

Other pictures from Ayas Saryg-Ool’s previous service in the 74th brigade in Kemerovo (Central Military District ) can be found in his album:

Taking into account the information above, we assume that Ayas is a seasoned contract soldier with combat experience from his former service in airborne forces who now serves in a recon battalion of the 74th brigade. 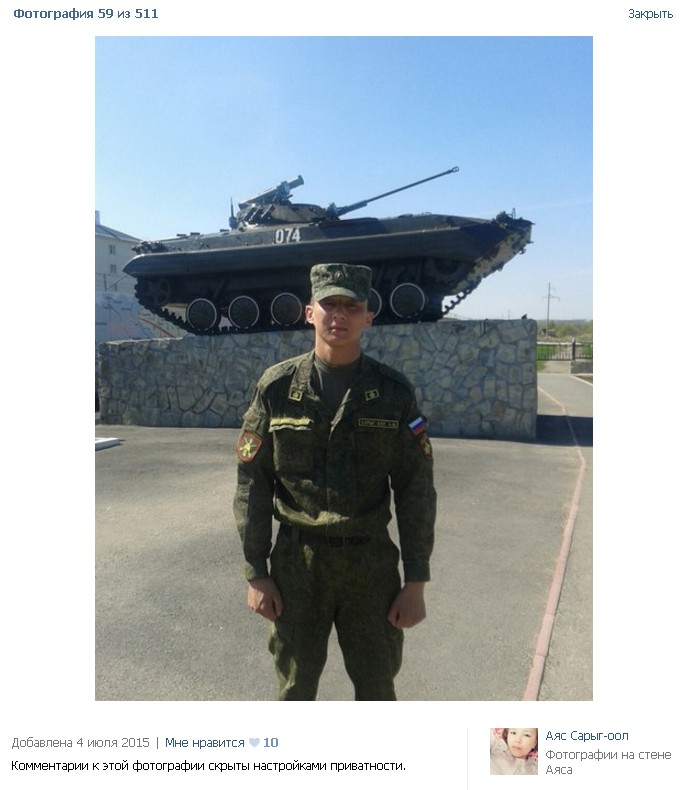 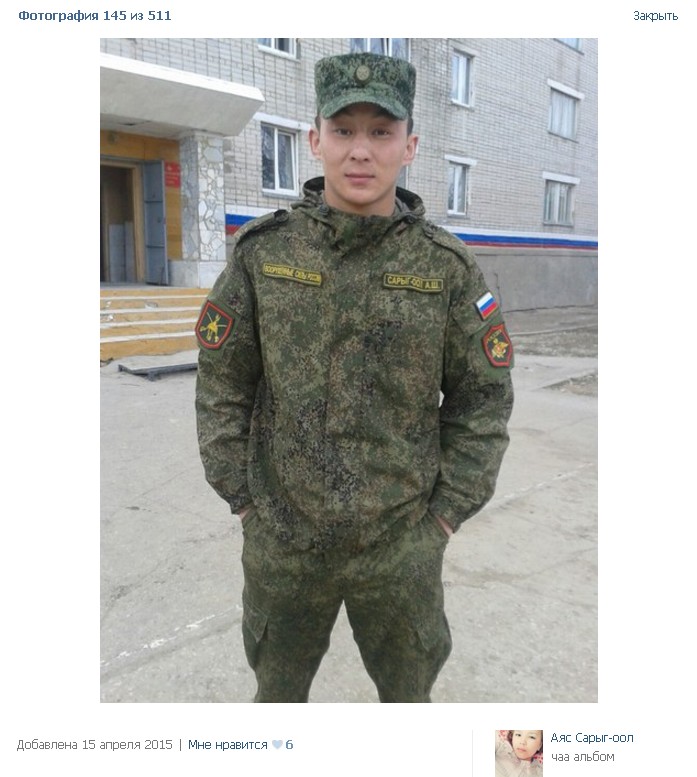 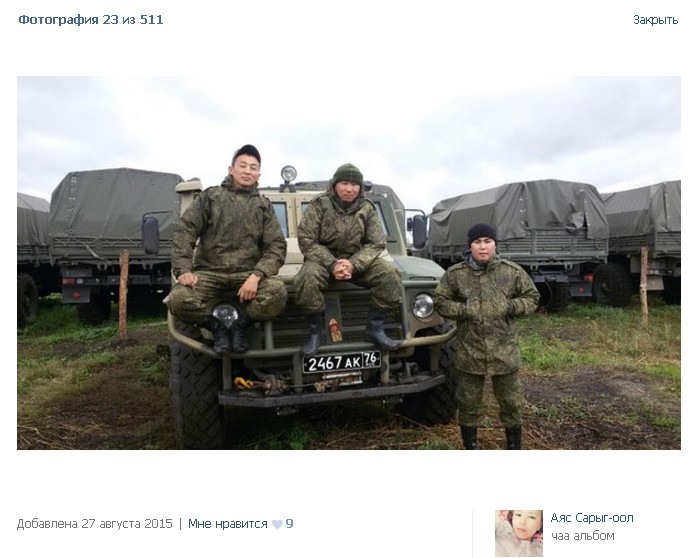 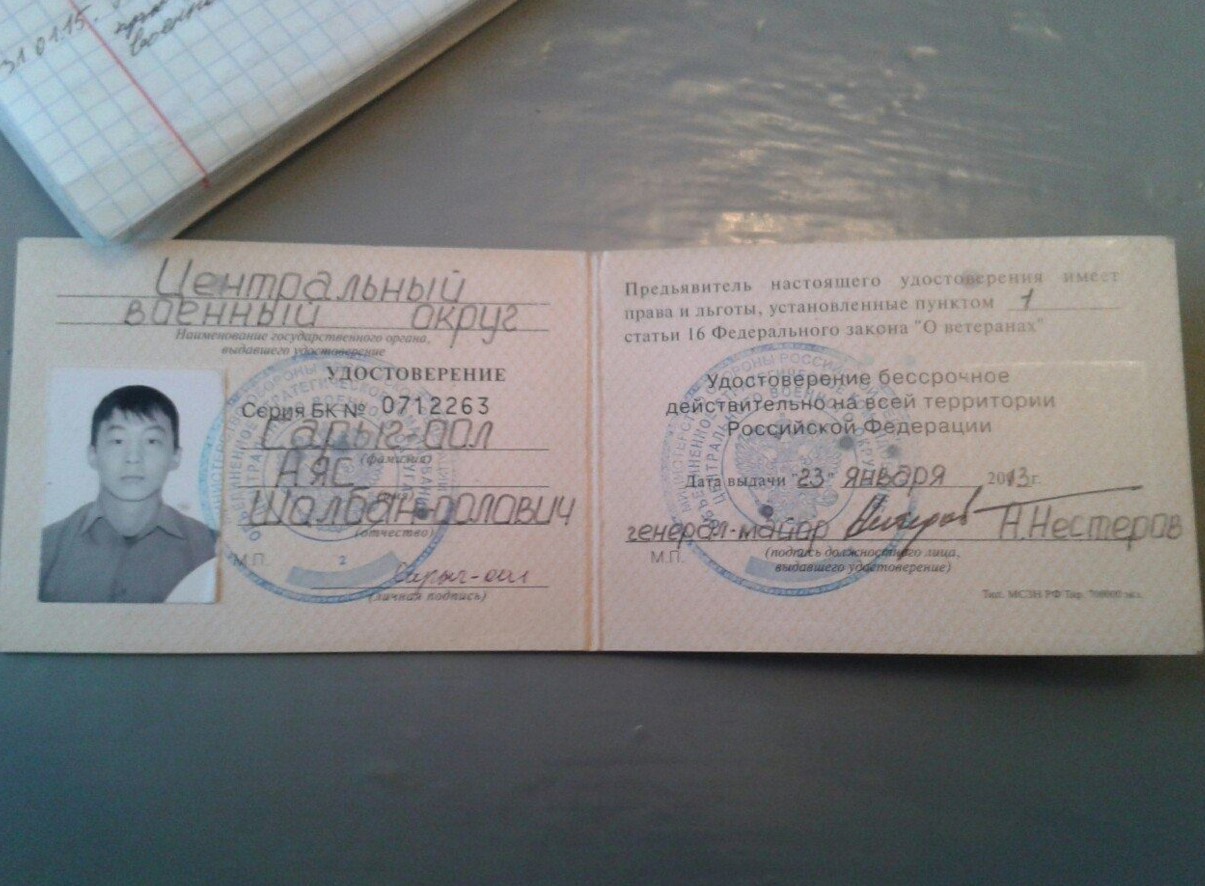 Note: It should be pointed out that the units of the Russian 74th brigade have been mentioned in the articles our community for several times by now. Previously it happened in the context of the ‘Russian-Ukrainian assignments’. In November of 2014 some destroyed equipment of this military unit was identified in Donbas – “74th Separate Motorized Rifle Brigade — Another Proof of Russian Presence in Donbas“. “The Russian 74th Brigade’s Contract Servicemen Fight in Donbas As Hooligans“, another story proving that certain servicemen of this brigade are still in the occupied territory of Donbas, was published in October, 2015.

In parallel to the data on the aviation component, the InformNapalm has published the facts of the Russian military presence in Syria:

Original article by Irakli Komakhidze (based on the OSINT investigation by Nikolay Mahno), translated by Stepan Grishin