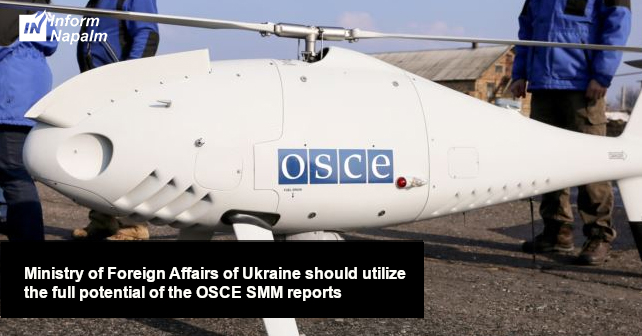 InformNapalm volunteer intelligence community draws the attention of the journalistic and diplomatic communities to another fact of the supply of ammunition to occupied areas of Donetsk and Luhansk Oblasts from the Russian Federation.

This conclusion was made after analyzing the official report of the OSCE Special Monitoring Mission to Ukraine (SMM) for June 14, 2019.

“The SMM spotted military trucks travelling back and forth between a railway station and a warehouse in non-government-controlled Sukhodilsk near the border with the Russian Federation.

In 2015, the railway junction in Sukhodilsk came to the attention of the InformNapalm volunteers on many occasions and became a focal point of several investigations [1] [2] [3] [4] [5].

The following video shows the usual practice of ammunition handling at the railway station Krasnodon which is located in Sukhodilsk, Luhansk Oblast.

It is worth mentioning that over the past few months, OSCE reports have become a source of valuable intelligence data to our community which could be further analyzed and supplemented with our own findings.

In July 2018, the OSCE mission began to surprise us. Although back then, InformNapalm criticized it for a 14-day delay in releasing sensational data about spotting four Russian electronic warfare (EW) systems in Donbas at once (RB-341V Leer-3, 1L269 Krasukha-2, RB-109A Bylina and a Repellent-1 anti-UAV system).

However, since the beginning of 2019 analyzing the reports of the OSCE SMM helped us establish the following:

In this regard, InformNapalm volunteer intelligence community draws the attention of the readers, journalists and diplomats, especially the representatives of the Ministry of Foreign Affairs of Ukraine to the fact that the quality of information from the war zone in Donbas in the daily reports of the OSCE Special Monitoring Mission has significantly improved over the past year. Our assessment concerns the part of the reported data that can be used against the Russian Federation at the international level as indisputable evidence of the presence of unique types of Russian military equipment, continued supply of weapons and ammunition to the occupied areas of Donetsk and Luhansk Oblasts from the Russian Federation. However, it is necessary to understand that the format of these reports does not allow for any analytical conclusions, descriptions of models and types of weapons. Therefore, these data require additional analysis and monitoring, collating of equipment types with movements of military convoys through uncontrolled parts of the border with the Russian Federation, and the arrival of trains.

The reports contain dry facts indicating only the types of weapons spotted and certain immediate events, which, however, could have much broader implications upon a closer look and should certainly be brought up at the international level through diplomats and journalists.

Since 2014, there was a perception in the Ukrainian society that the OSCE SMM tended “not to see” the presence of Russian troops in the Donbas for some reason (e.g. suspicion of corruption, presence of the Russian and pro-Russian lobbyists in the mission, etc.). However in 2019, InformNapalm notes a dynamic change in this situation. Perhaps the improvement in the “eyesight” of the mission is connected with the replacement of the leadership or individual personnel changes, or maybe with the improvement of the mission’s technical capabilities, including the use of long-range UAVs and the recruitment of new specialists to analyze aerial photographs. These images are not released to the public in the reports, but it can be assumed that military experts are reviewing them when identifying the latest types of the Russian weaponry. Sometimes photos and videos of the mission are posted on Twitter, which confirms the presence of specific documented evidence under each report.

InformNapalm community recommends that the Ministry of Foreign Affairs of Ukraine pay close attention to the SMM reports and use them as a diplomatic tool.

Distribution and reprint with reference to the source are welcome! (Creative Commons — Attribution 4.0 International — CC BY 4.0)For notifications about InformNapalm investigations follow us on
Facebook / Twitter / Telegram. Please repost and share! You can also support one of our community’s volunteers who is undergoing an expensive cancer treatment. Pleas find the details for assistance here.