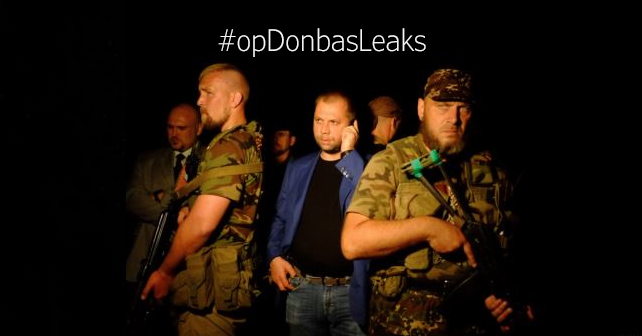 In August 2015, it was reported that the former «prime minister» of the self-proclaimed terrorist enclave «DNR», Alexander Borodai had founded an organization «Volunteers for Donbas».

Borodai is a Major General in the Russian Federal Intelligence Service «FSB» abroad, he is better known as a political analyst. According to media reports, Alexander Borodai has since 2002 been a deputy head at «FSB» with responsibility for information policy and special projects. In April 2016, the Ukrainian hacker group #FF FalconsFlame hacked some terrorist organizations in Donbas obtaining tens of gigabytes of useful information retrieved from mailboxes, especially Russian coordinators’ e-mail boxes. As a result of the data leak, InformNapalm can continue to publish facts about active Russian information and agent network in Ukraine.

Notes, copied documents and emails to the organization «Volunteers for Donbas» which have sent to and from the Russian mercenaries and soldiers now are a weapon against them. The hackers have named the publications to #opDonbasLeaks. They started in early 2016, in connection with the #PanamaPapers as a «straight punch» against the Russian leadership.

The publications are based on data leakage from the organization «Volunteers for Donbas». The notes contain lists of separatists from Crimea fighting with the armed formations of the two breakaway republics of Luhansk and Donetsk. Much of the information has been produced by those responsible for special operations at the prosecutor’s office in «DNR», and Dmitry Havtjenko who is the founder of the organization’s branch in Crimea.

Remarkably, Dmitry Havtjenko and Alexander Borodai are closely associated. Alexander Borodai was observed on a video at the handover of the black boxes from the downed Malaysia Airlines MH17, shot down over Donbass on the 14th of July 2014. There are 27 names on the Crimean branch list of separatists who are fighting in Donbass. Eleven of them are registered on the Myrotvorets Center’s criminal records, the rest have not yet been identified [crimeasddtel.xlsx]. This is far from the complete list of the Russian regime’s henchmen, who immediately after the annexation of Crimea, barked off to occupy Donbas under the slogan of the «Russian world». 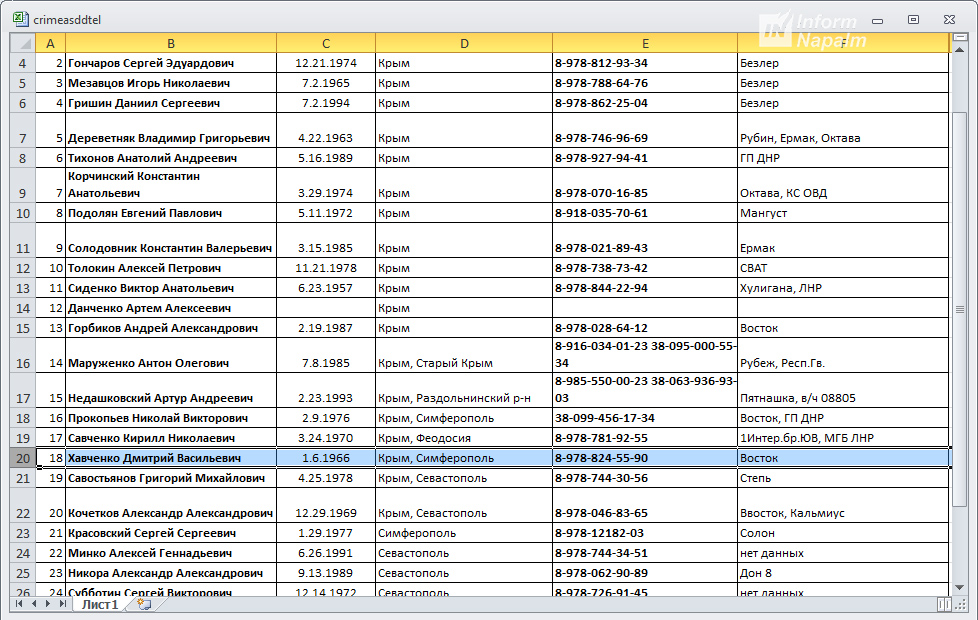 Similar lists have repeatedly been sent to the mailbox of «Volunteers for Donbas», which is also controlled by the «FSB». This means that all information about Russian terrorists in Donbas, Crimea and Syria are included in the Russian Federal Security Service database.

Friday, April 8th 2016, the Sevastopol municipality commemorated the occupation of Crimea. When it was time to sing the Russian national anthem, the lyrics on the screen were shown with a different content. Yet the work of patriotic hacker groups.

The end of March, beginning of April was characterized by «contests» between hackers. Among other large-scale revelations, the #PanamaPapers and the series of #opDonbasLeaks were published. Perhaps this type of action is the next step in the fight against Russian hybrid aggression?

CC BY 4.0 – Original article written by InformNapalm. Upon reprint or reuse of the material, an active link to our project is compulsory.