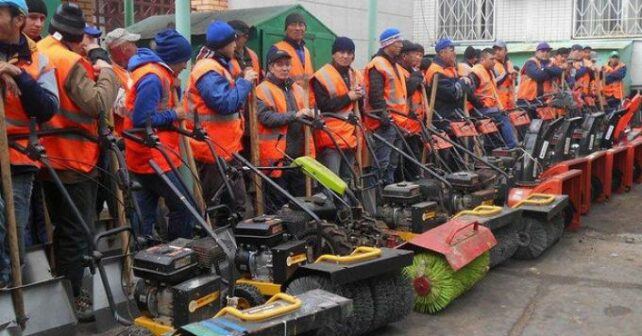 According to the news portal RBC.ru T-14 Armata tank manufacturer Uralvagonzavod during 2014-2016 accumulated more than 100 billion rouble debt followed by 20% reduction of salaries in 2020.

In company’s financial statements published for 2020 Uralvagonzavod (UVZ) salaries expense felt by at least 22% or 2.5 billion roubles, i.e. to 9.2 billion roubles compared to 11.7 billion in 2019. Meanwhile number of employees at the end of 2020 decreased by 326 employees and amounted to 29,748. Despite reduction of employees the arithmetic average salary per person in 2020 compared to 2019 decreased by 21% net.

Company’s management justifies decrease of the salary fund allegedly due to downtime related to the COVID-19 pandemic. However this excuse is questionable as in November 2020 local federal district news agency “Pravda Ural“ was writing that qualified employees of UVZ are being sent for public works due to insufficient production loads.

Tank Armata is embarrassingly dragged during the Victory Day parade

During the interview with RBC.ru in 2019 CEO of UVZ Alexander Potapov told that the average salary in Uralvagonzavod is about 40 thousand roubles a month and is allegedly “higher than the average salary in Nizhny Tagil”. Meanwhile in March 2021 “Ekaterinburg Online“ was writing that UVZ employees were complaining about very low salaries. The article says that UVZ employees are receiving in average 25-30 thousand roubles. “As a senior master I get a salary of 25 thousand roubles and the possible bonus is not more than 20% extra to that. That’s it. This is a beggar salary. I’m working five days eight hours a day. To earn some decent money you need to live there… Then maybe there would be possible earn 40-50 thousand but for that you need to have 200 hours a month, “said Evgeny Medvedev, a senior master at workshop 555 who works for UVZ since 1997.

According to the news agency TASS quoting CEO of “Rostech Corporation” Sergei Chemezov UVZ’s total debt stands now at $87 billion roubles. Prior the “Rostech” took over the company debts were much higher but some of them were covered by the state. The remaining $87 billion is expected to be covered by company itself. 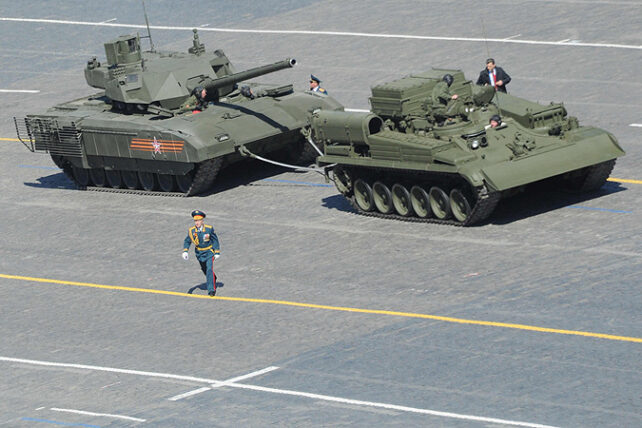 Tank Armata is embarrassingly dragged during the Victory Day parade

2015 it was solemnly announced that UVZ had received an order from the Russian to produce 2,300 T-14 Armata tanks until 2020. This was followed by information that the deadline was postponed to 2025 due to the reduction of defence spending. In 2018 Deputy Prime Minister Yuri Borisov at the “Army-2018” forum already stated that tank T-14 is too expensive for serial production, therefore instead of purchasing new tanks Ministry of Defence will be continue modernization of existing T-72 and T-90. Later it was reported that the Russian military would still receive the first T-14 tanks in 2022.

Having in mind constant delays, the inconsistency of reports and salary reduction for UVZ employees this plan may also be highly questionable. Currently are produced only around 20 units of T-14 Armata tanks in total.